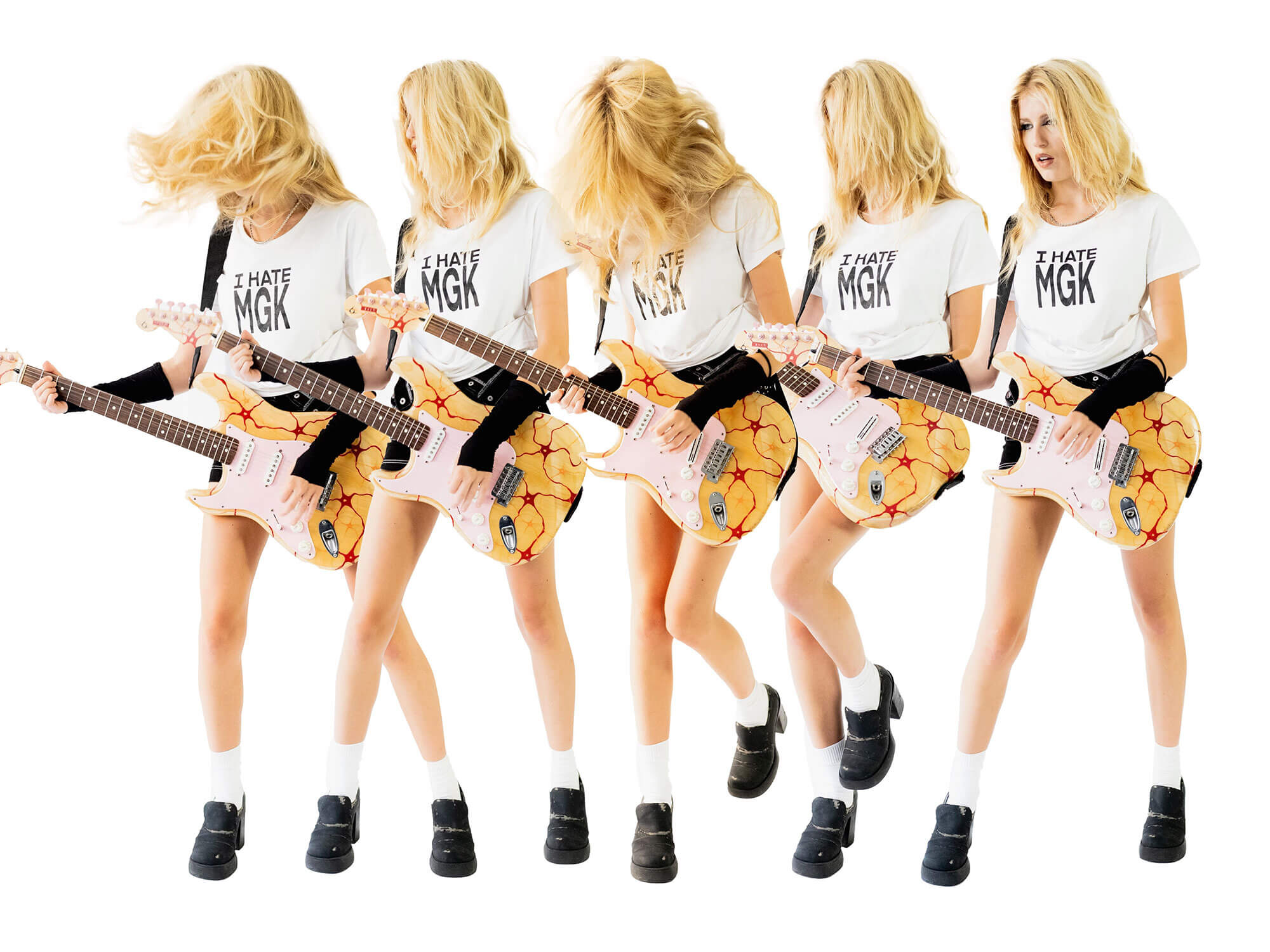 Sofia Victoria has more than 60,000 TikTok followers, meaning she could fill London’s O2 Arena three times over if they were all put in a room together. What’s drawing the world to her videos? We find out more.

Among the endless TikTok videos of acoustic covers and different renditions of Master of Puppets, you may just see one of a spritely girl flipping her long blonde hair like Jerry Cantrell. The Canada-based guitarist shreds out riffs from artists such as Soundgarden and Limp Bizkit, and has even received the approval of Fred Durst himself, who occasionally drops appreciative lightning bolt emojis in her comments.

The instrument with which she weaves her spells? A Strat covered in bold splashes of red, with a baby-pink pickguard and tuning pegs, “made by yours truly”.

This is 18-year-old Sofia Victoria. She posts across TikTok, Instagram and YouTube under the handle @guitarwindsor, and has captivated an audience of thousands just by playing her favourite songs in her bedroom.

Though she doesn’t take herself too seriously – you might see her wearing an “I HATE MGK” T-shirt, and her captions are packed with wit and sarcasm – she’s truly building a name (and an instrument) for herself as a guitar influencer.

What made you want to get started on TikTok? Did you expect your videos to be such huge hits?

“I wanted to have something to send people to show my playing ability, so I started a YouTube channel and would post covers. When I hit 100 subscribers, I wanted to say thank you, so I did one of those YouTube Shorts. The next morning I woke up and it was at 1,000 views, which was insane, ’cause I was used to, like, 30 views.

“So I was like, ‘Let me do this again. Let’s see if it’s a one-time thing.’ Before that, I had no social media. I was completely against it. I just saw how damaging it was. But I thought if it’s for business purposes I’ll do it. I started the TikTok page and one video got a lot of attention, a Black Sabbath cover hit 100,000 views. That made me so happy. I got a bunch of positive feedback which I wasn’t expecting. It’s all from that one little YouTube video that inspired me. The fact that people take time out of their day to watch me play guitar is amazing, that makes me happier than anything in the world.”

Tell us about your journey with guitar. Where did it all start for you?

“My dad used to own this bar and a band that was touring left a guitar there. He called them and they were like, ‘Oh, that piece of junk? You can have it’. So he held on to it for like 10 years. [Eventually] I’d started growing a passion for music and was trying to fill up my wall with records and stuff, so he gave me it. I’m holding it right now [Sofia lifts the guitar, now modded and customised, to the camera].

“It just sat in my room for years as decoration but, whenever I’d walk in, I’d always pluck the E string, and that’s the first note on Seven Nation Army. One day I decided to learn that song and, once my music taste shifted – I used to be really heavily into Michael Jackson, Elvis Presley and George Michael – that was when I really started playing non-stop. The guitar was a piece of junk. It was left-handed too, and I’m right-handed, but I didn’t know there was a difference so I just thought that everyone was this uncomfortable when they played! But I learnt anyway. I’d say the pandemic helped a lot – I had an insane amount of free time so I’d play for 10 hours a day.”

You describe the guitar today as self-made. Can you talk us through your modifications?

“The first thing I changed was the tuning pegs ’cause it would always fall out of tune. Then I sanded down the neck to make it thinner. There was this thick layer of gloss on it so my hand would always get stuck when I was going up and down [the frets]. I changed one of the pickups from a single-coil to a humbucker, because I wanted the heavier tone. My biggest inspirations in the beginning were Jerry Cantrell and Kim Thayil and they both had humbuckers.

“I rewired the whole thing, because the wires were frayed, and I put a zip tie around my nut ’cause it was cut so poorly that if I pushed too hard one or two [strings] would fall out of it. I could buy a new nut but it makes it unique. At this point, it sounded how I wanted it to, but it was ugly! I always had a vision of having a clear pickguard so you could see all the mechanics inside but I didn’t realise that if light got into the guitar it created this awful fuzz, so that went out the window. Eventually I was inspired by the Red Hot Chili Peppers vibe – the Rain Dance Maggie music video – that sort of aesthetic. I feel like I’ve captured that. When I look at my guitar I feel like I’m looking at a sunset of some sort. I recently added these kiss marks [Sofia lifts the guitar to show lipstick kisses on the body].”

How do you get your tone? Do you have any favourite amps or pedals?

“I use an Orange Crush 20 amp and plug my guitar straight into it. It has the most amazing tone. Before that, I had a little $50 one-watt amp from Fender. My videos don’t really capture the tone ’cause I just use a microphone, but it’s really heavy and raw-sounding. I have about 10 pedals but I only ever use my Dunlop Cry Baby. I feel like no one uses wah anymore – it’s all very pop punk in 2022, but I just think it sounds so cool.”

What about your “I HATE MGK” T-shirt. Did you make it because of his feud with Slipknot?

“Yeah. I made a whole merch line, essentially. Slipknot were coming to play a show in Detroit and I thought I’d love to wear a shirt [that says “I HATE MGK”] to their concert but I couldn’t find any, so I made one and filmed that video of me wearing it. Then it blew up. I pulled an MGK! I did exactly what he did to Slipknot – I dissed someone really famous for absolutely no reason, just for clout, and it worked.

“I launched a pre-sale and within a couple of days I got a cease and desist from his legal team, so I took it down. I wasn’t sure at this point if he’d seen it or not but a couple of weeks went by and I saw Landon Barker [son of Travis Barker] had commented “You’re an L” on my video, so I knew at this point that he’d seen it and sent his little minion to go diss my page. I made a response video flipping him off and he deleted the comment. Honestly, it was just a publicity stunt. I’m not the biggest MGK fan obviously but I don’t hate him. I can’t hate someone I’ve never met.”

There’s been a huge boom in the popularity of pop-punk thanks to artists such as MGK and Willow. Do you think this is inspiring the next generation to play guitar?

“Pop-punk is a great genre. It’s getting people into rock, which I’m all for. I feel like every decade has a rock genre that takes over and I feel like this is paving the way for a new one, ’cause pop-punk already existed before MGK and Willow. Anyone can appreciate the fact that live instruments are coming back, not just someone playing a track, you know? I just think there’s better rock music out there that people aren’t aware of yet, which is fine – everyone has their journey of discovering what’s good.”

You’re on the lookout for a band right now. Will we see you sharing original music in the near future?

“Yes, definitely. I’ve been writing music my whole life but I’ve been trying to find a sound that suits me. I’ve been accumulating recordings to release. The only thing that’s standing between me and doing that is money. I do have a drummer right now but he lives on the other side of America. We send each other stuff back and forth. I do plan on releasing music, it’s just a matter of getting together with people and financing it all. I’m excited for the day I don’t have to post videos anymore. Although I love it, I see the potential in my music and I just wanna get it out there. That’s what I’m hoping for – to have an album out with a band I love.”