Few bands have been more hyped than Wet Leg since the release of their debut single last summer. We meet a duo taken aback by their rapid rise.

Wet Leg are one of those tremendously buzzy bands – they placed nosebleed-high on the BBC Sound of 2022 poll, sold out a tour off the back of a sole single, and have already attracted the attention of late-night TV shows in the US – that you know in your heart will probably be terrible on some fundamental level. Only they’re not. Wet Leg is a fizzing, all-court delight of a debut record, packed with deadpan wit, clever structures and killer melodies.

Speaking with Teasdale and guitarist Hester Chambers towards the tail end of a press day at their label drives home how quickly all this has happened. They are clearly taken aback by the whole jamboree but are definitely having fun figuring it out. Wet Leg have only been a thing for a couple of years and their march to the top began just last summer with the word-of-internet sleeper hit Chaise Longue. As debut singles go, it’s a world-beater, neatly encapsulating the duo’s melodic verve, new-wave palette and lyrical bait-and-switches in just a few instantly quotable minutes.

Teasdale and Chambers are from the Isle of Wight, a short hop by ferry off the south coast of England. They met at college a decade ago and formed Wet Leg to keep the party going after a spell spent inspecting the UK festival scene as both performers and punters. “We just had a summer of rolling around with our other bands playing shows and it really helped inform the kind of music we wanted to make when we started Wet Leg,” says Teasdale. “We both just knew we wanted to be playing electric guitar, and we wanted to take up a bit more space than we previously had been doing.” 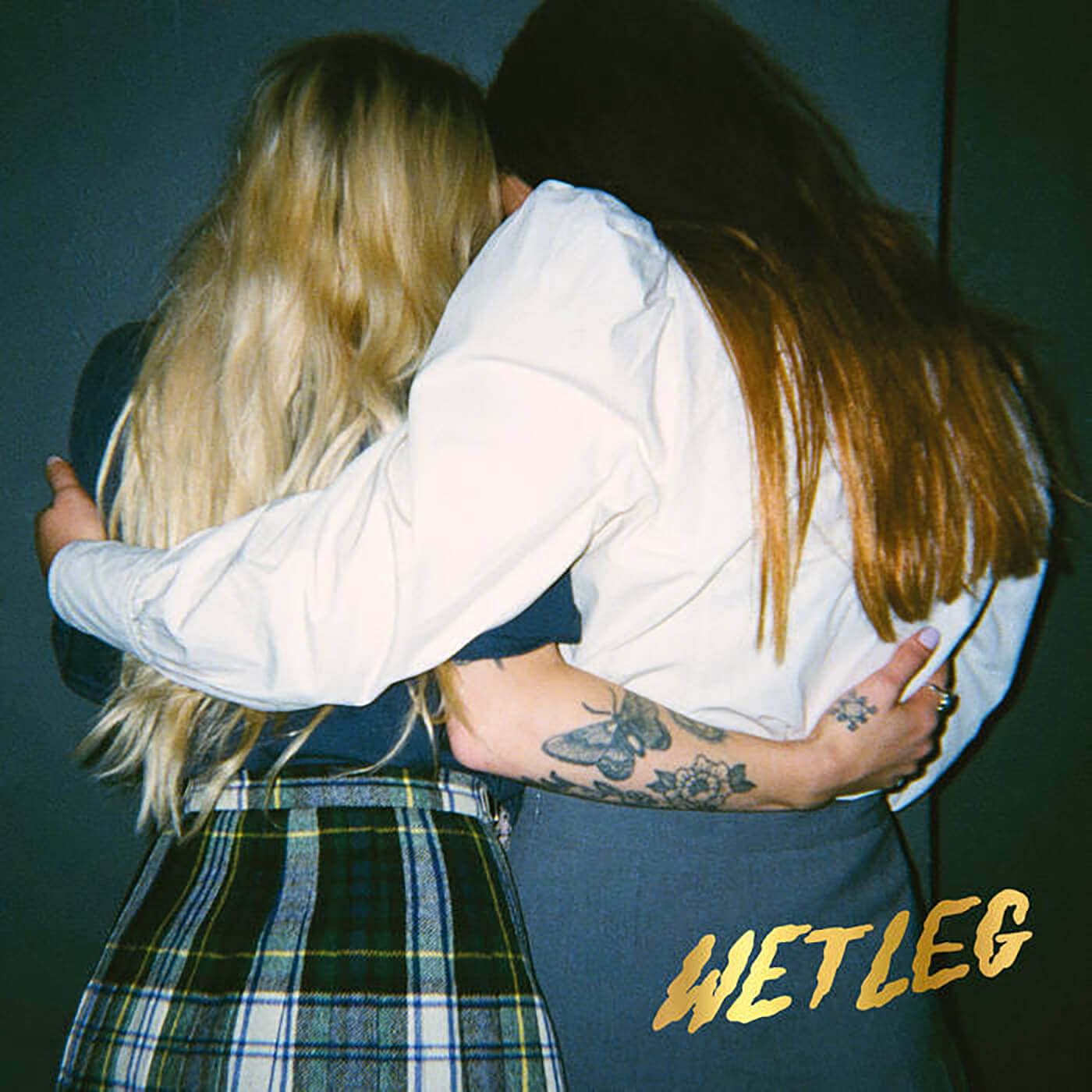 Teasdale only took up guitar when Wet Leg came into focus, having previously written on piano and performed as a solo artist, an existence she found isolating and somewhat unfulfilling. Chambers, meanwhile, has a seemingly endless supply of odd, weaving leads that seamlessly lock in with her bandmate’s vocals. Both are self-deprecating when it comes to their playing, which is perhaps understandable given the punishing chops-over-songs position prized by so many guitar dudes. But it’s also entirely in line with their whole vibe.

“We don’t have tekkers,” Chambers says, with a smile. “That fed into how we were playing music before, where you’re a little insecure about your abilities. That was on the table and we were like, ‘We’re not having as much fun as we could have if we just let go of those inhibitions and did it for ourselves’. We changed all our focus onto whether or not we were going to give ourselves a shot. We still don’t have tekkers, but more so than when we started.” 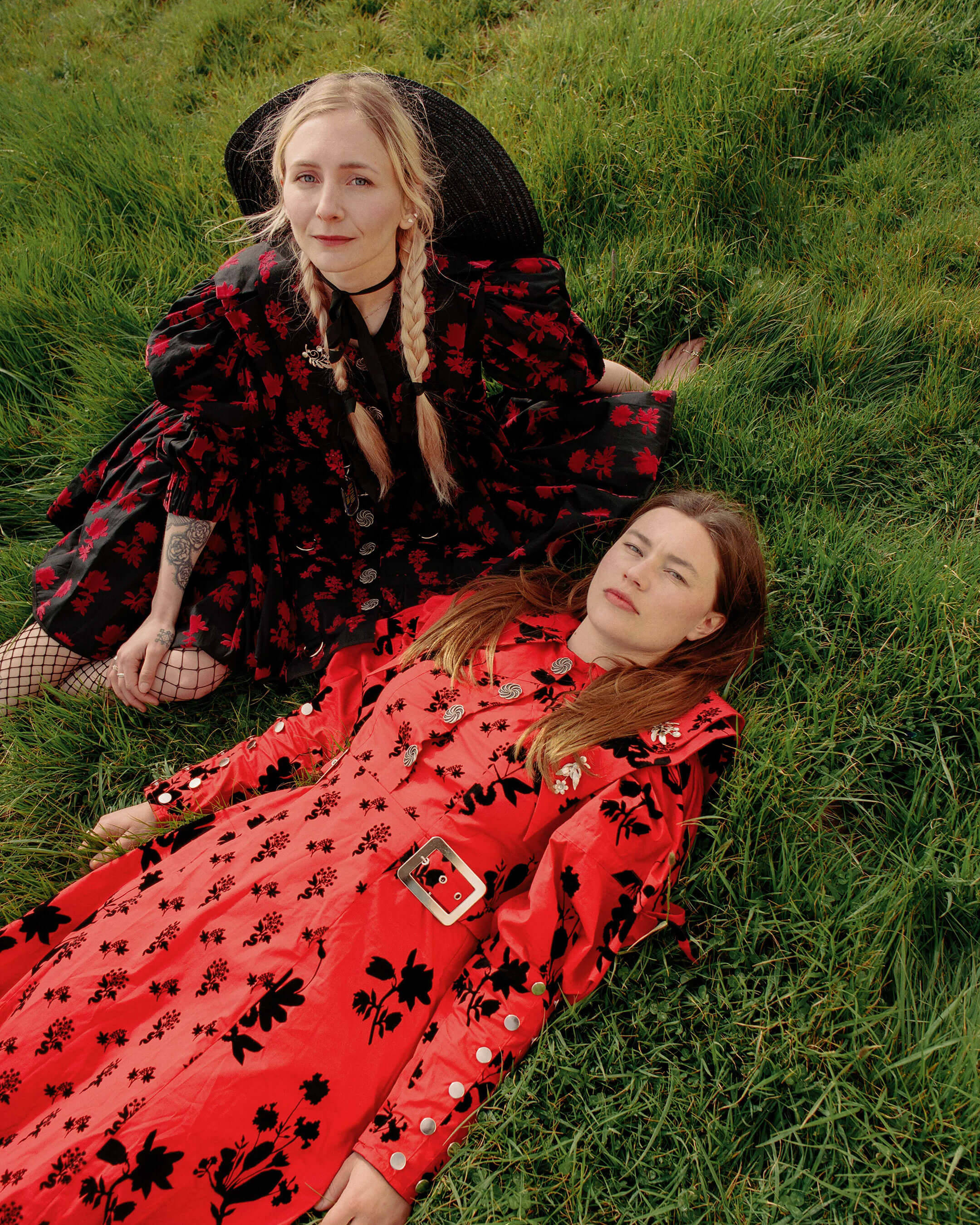 Chambers also believes that this feeling has a knock-on effect on one of Wet Leg’s trump cards: those conversations held between Teasdale’s voice and her guitar. “I think Hester has a knack for finding space,” Teasdale observes. “I’m more of a singer and put so many vocals everywhere. I don’t know how Hester’s brain works or how she manages to find the perfect melody that swoops in on an already hectic section.”

“I think it’s part of being insecure about your instrument,” Chambers replies. “I’m like, ‘I don’t know how I can contribute to this with another melody or the right sound’. The core of Rhian’s songwriting is so strong. For me, it’s a struggle in the beginning.”

Teasdale looks at her bandmate and says, quietly, “We get by, don’t we?”

A lot of the writing here is high-wire stuff. Teasdale delivers punchlines with the straightest of faces, sliding zingers, low-key savagery (see Wet Dream’s “Do you want to come home with me? I’ve got ‘Buffalo ’66’ on DVD”) and barely concealed filth into winning choruses. Sidestepping the more measured, obviously arty sprechgesang of Dry Cleaning, another very funny post-punk-adjacent band, Wet Leg go all in on things that make them laugh without once making their songs feel like a joke.

“I felt Ur Mum was a bit like, ‘Is this too far?’ It’s really embarrassing to have a middle section where it has a Taylor Swift ‘Hi, I’m Taylor Swift’ bit,” says Teasdale. “I was like, ‘So, are we actually going to put this in?’ But if it makes us feel awkward, we’re like, ‘Yeah!’’” (For the record, Wet Leg’s version of a ‘Hi, I’m Taylor Swift’ bit goes, “Okay, I’ve been practising my longest and loudest scream / Okay, here we go…” before Teasdale unleashes her longest, loudest scream.) 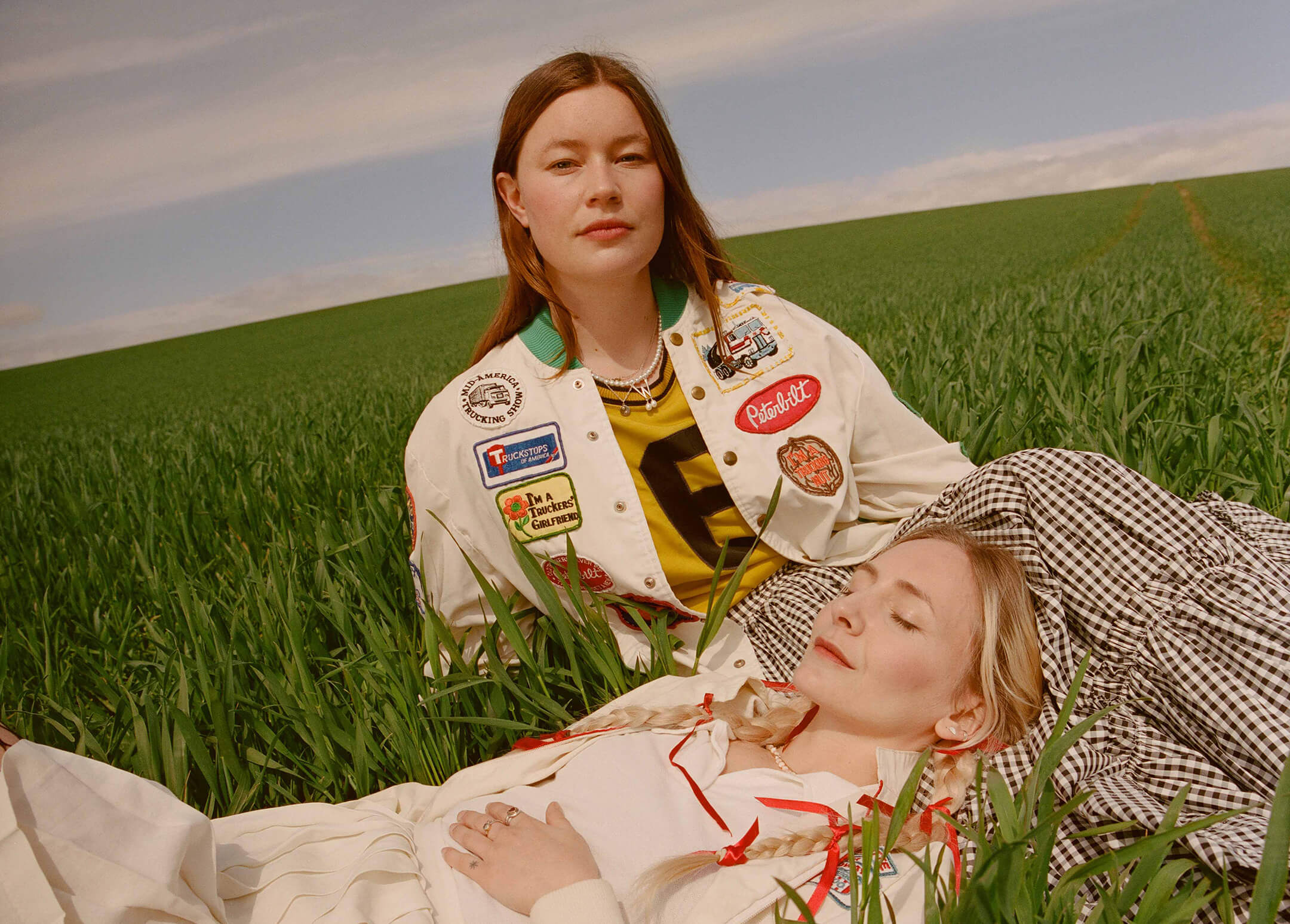 Wet Leg was recorded in the spring of 2021, largely with producer Dan Carey. Along with producing records by Fontaines D.C., Black Midi, Bat For Lashes and Kae Tempest, Carey is one of the minds behind the label Speedy Wunderground, an innovative rules-based art project turned indie proving ground that has helped launch everyone from Black Country, New Road to Squid. The balance of experience and freewheeling creativity he offered was perfect on paper and similarly effective in practice.

“Me and Hester have never made a record before, obviously, so it was overwhelming in a way,” Teasdale admits. “But he wrote all the songs on the door and what we needed to do for each. It’s a really creative process but it’s very systematic at the same time. Otherwise, there’s just so much stuff in that studio. You’d get lost. It’s important to have a shepherd to guide you.” 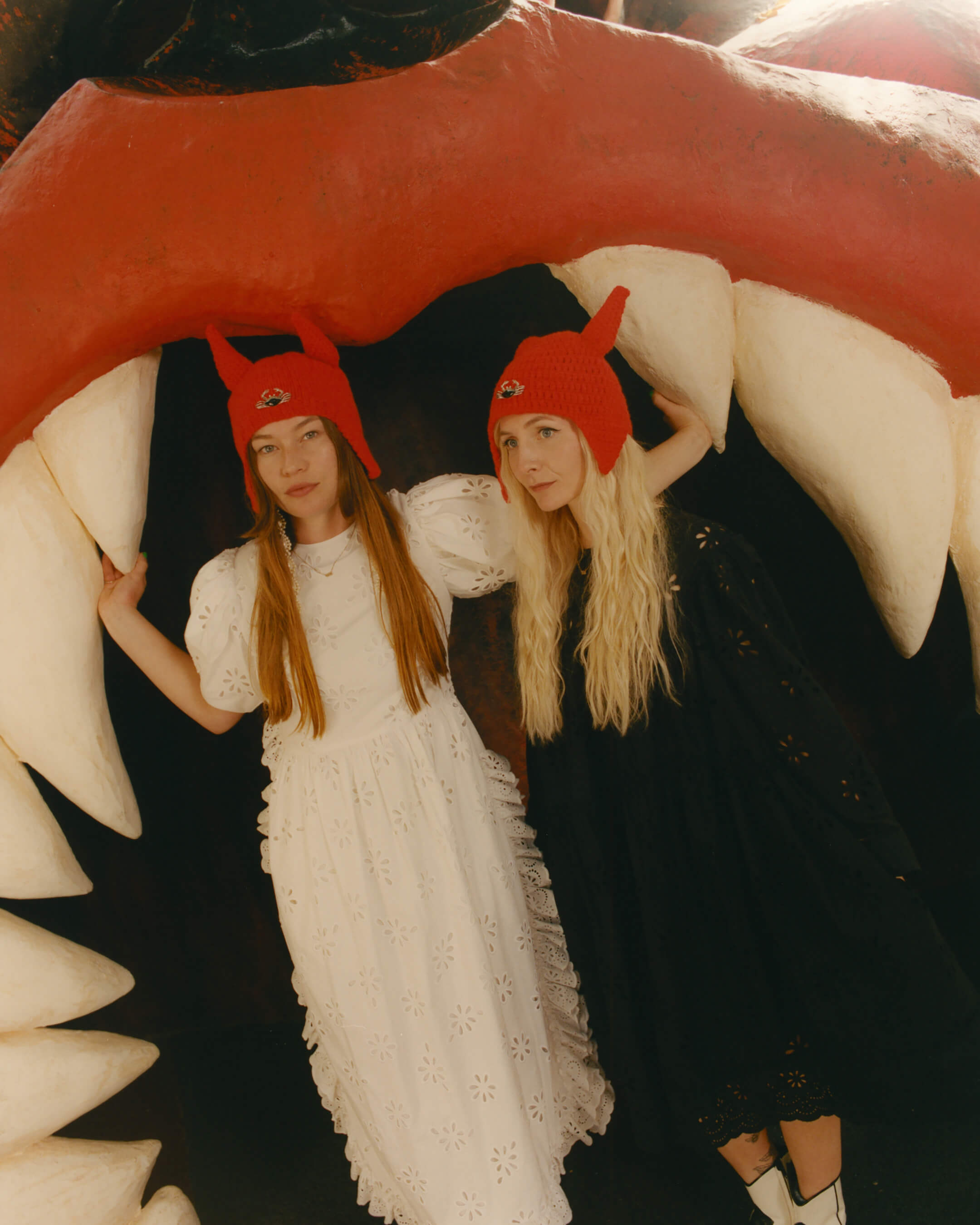 Backed by the rhythm section of bassist Ellis Durand and drummer Henry Holmes, plus a third guitarist in Joshua Omead Mobaraki, the process was responsive. “We started off all playing together in the room, which is quite old-school,” Chambers says. “But I think it’s really fun that way. It makes it feel like you’re working together, like when you’re playing live, you’re a team. You’re all making the sounds, it’s creating this thing. But maybe because we hadn’t played any gigs as that line-up before, we then decided to track drums and bass together, and then our guitars together so there was still a live feel.”

“Previous recording experiences I’ve had have always been quite nerve-racking when someone presses record and it’s just you, and everyone is waiting for you to record this perfect take,” Teasdale adds. “So recording guitars together took the pressure off and made it more imperfect, in a good way.” 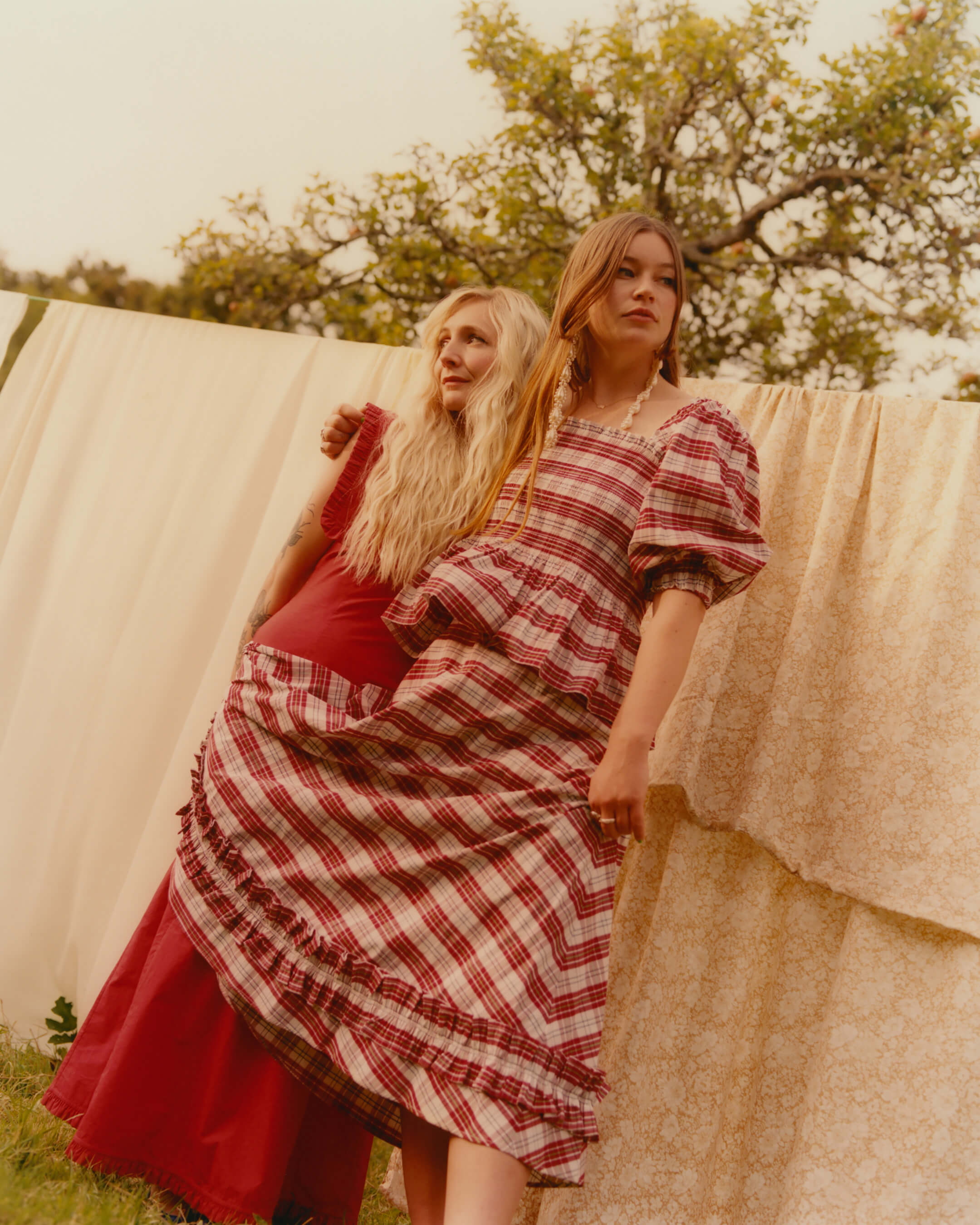 Teasdale used a Mustang during recording, having played a Jazzmaster since she first picked up a guitar. There’s a Tele in the mix now too but it’s struggling to stake a claim. Now that people have started sending them free stuff too, the competition is about to get fierce. “I don’t really know how attached to it I feel, to be honest,” Teasdale says. “I’m still on that journey. I’m so new to it.”

Chambers uses a Hofner 173. “It has these really gross stuck-on gems that came with it,” she says. “It’s got quite a lot of knobs. I found it quite scary to begin with but now it’s like, ‘I know what you do, I know what you do…’”

Carey is the sort of producer who answers an idea for a tone by reaching under the desk and producing a pedal that might get you some of the way there, something that Teasdale and Chambers welcomed, saying that it allowed them to effectively build the sounds they heard in their heads. As a result, the guitars on Wet Leg are attuned to the irreverent, almost anarchic spirit of the songs, with more grit than you might expect and no end of surprising, scratchy drones and trebly leads to keep things weird. 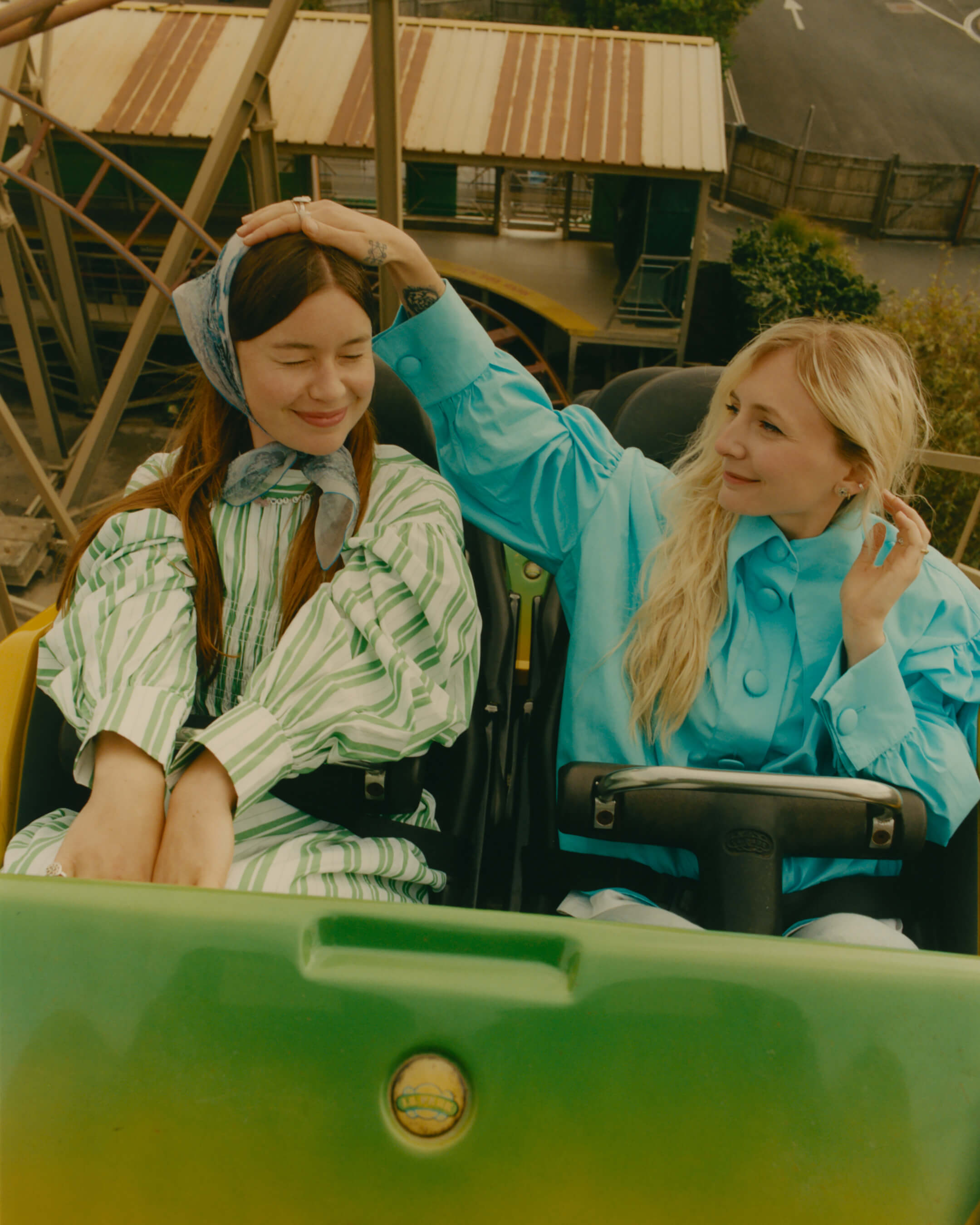 “In the first week, we tracked the bass, drums and basic guitar,” Teasdale says. “Then in the second week we’d go in a really linear fashion to find guitar tones that would sit well as a flavour on a few songs. Instead of creating loads of different, unique ones for each track, we created a palette as we went along.” Chambers agrees, adding: “It adds relatability to the songs as you go through the album.”

Wet Leg’s rise began at a time when laughing, singing and long summer days (or shotgunning all three) felt like indistinct, gluttonous hopes. It is a testament to the quality of the songs that comprise their first album that, when it’s spinning, the frightening, heavy, guilt-ridden context that framed its creation disappears with a brutal one-liner, a flash of teeth, and a halo of sunlight.