“I’m a rocker at heart but you have to have light with the shade”: session legend Michael Landau on his approach to guitar

s the superstar sideman releases his latest live album, Liquid Quartet Live, we caught up with him to talk feel, tone, Strats, and what it’s like being in the studio with Pink Floyd, James Taylor and Joni Mitchell. 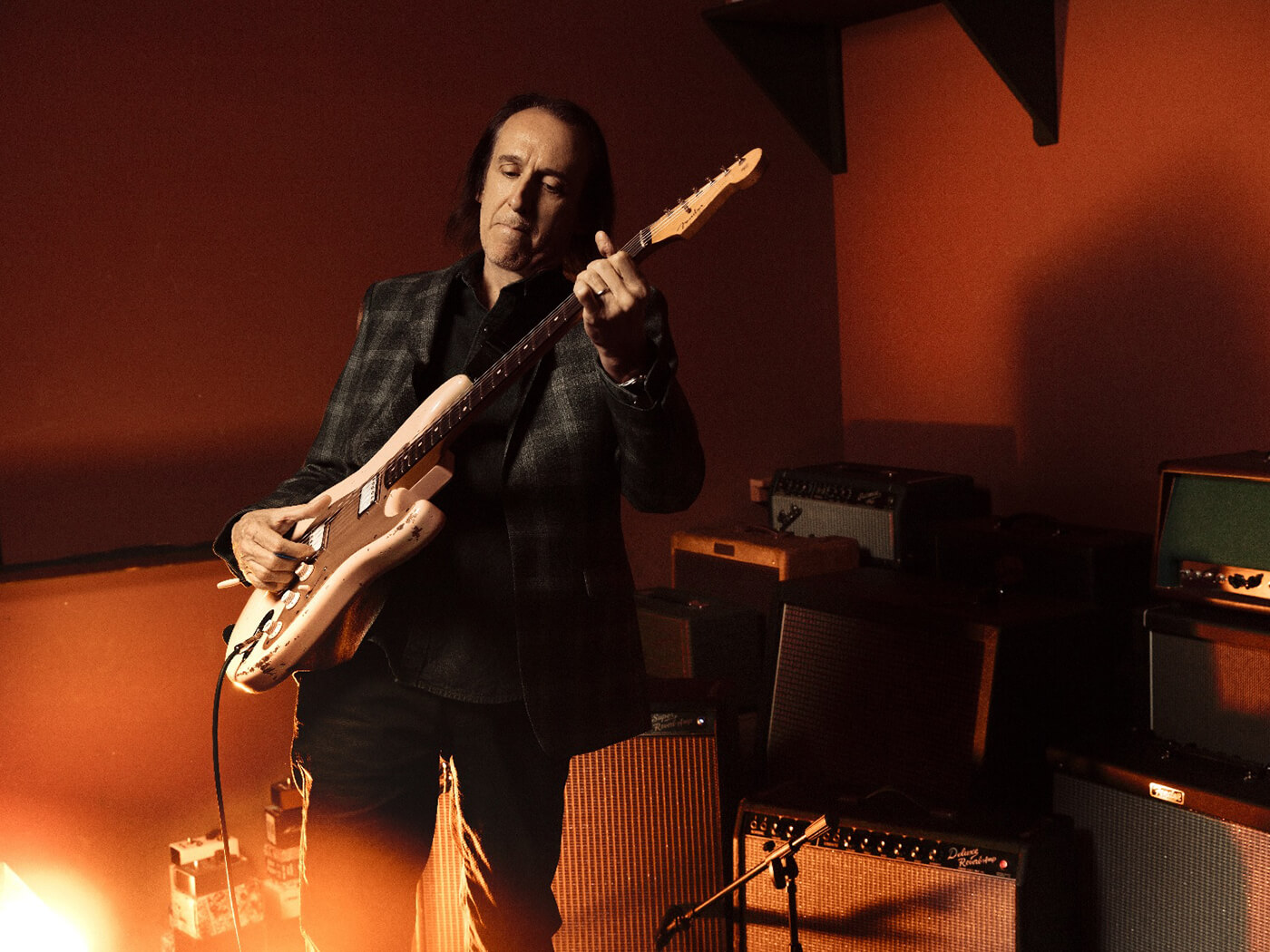 Mike Landau is not like other guitarists. His soft-spoken and self-effacing nature contrasts with a CV that includes some of the biggest names in modern music from Miles Davis and Joni Mitchell to James Taylor and Pink Floyd to name a few.

We caught up with Landau at his LA home as he celebrates the release of his new live full band album Liquid Quartet Live to find out more.

Live albums are quite rare these days, how did you approach this one?

“Well, we booked two nights at The Baked Potato Jazz Club in LA, it’s a small, family-owned venue that seats about 120 people, really intimate atmosphere. I play there a few times a year. John Paterno, a friend of mine, brought in some of his real nice mic pre-amps and equipment and recorded two nights and I’m really happy with the sound of it, I think John did a great job of capturing it, he also mixed and mastered it, he’s an all-in-house rascal! We’ve done a lot of recordings together over the years, he recently got into mastering and he did an amazing job.

The album has a lot of different moods – from the bombast of Can’t Buy My Way Home to tender moments such as Killing Time how do you shape your setlist?

“I grew up with The Beatles and all that great music in the 60s and I’m a rocker at heart but you have to have light with the shade. I guess there have always been two sides to my character, I’ve always needed to mix it up. I hope that the tones, colour and intention in our playing glue that all together so it makes sense. After we play a mellow song it’s usually time to hit it a little harder and I’ve always done that. It’s part of playing to an audience.

Your work on albums such as Alanis Morisette’s Jagged Little Pill has come to be regarded as a gold standard of mixing contrasting guitar styles to drive a song, how do you go about finding the right recipe when you step into a session like that?

“There was a lot going on in the 80s and 90s and I was really fortunate to be coming up during that time. I love playing to support the song and yes, it’s all about texture. So it’s usually the sound that comes first for me. That definitely dictates what I play and how I play it.

“It’s a delicate balance. You don’t want to stand out too much and distract from the vocalist or the song but at the same time you have to keep it interesting, and sonic texture is the most effective way I’ve found to add something meaningful to a recording.”

You have worked with some legendary names, which sessions stand out for you?

“Well, Pink Floyd definitely! The first thing I asked was. ‘Why the hell are you guys calling me?!’ After I got over the initial shock I went to the studio and I was really nervous you know? David Gilmour was sitting there in the control room – I played a classic dotted 8th note Gilmour-style line and he really liked it! We were done in about 30 minutes and for the rest of the afternoon David showed me all the amps and guitars he’d brought for the recordings – that was memorable for sure!

Working with Joni Mitchell must have been a special moment, too…

“Joni Mitchell is just so creative, working with her was beautiful. Her voicings, all those tunings. She always spoke in colours – ‘Make it a little more purple here’ that kind of thing. Not everyone can get away with that kind of thing, but Joni is one of them – she can explain to you exactly what purple means and why it needs to be there. And she’s right!”

What’s your approach when playing electric guitar for James Taylor? There’s already a lot going on there!

“With James you need to keep your ears open and stick pretty close to what he’s doing voicing-wise, his music is a lot more complex than it first appears. James gets a big sound with acoustic guitar and voice. He doesn’t get as much credit as he should for his guitar playing – I think it’s so lovely. I tried to learn one of his acoustic parts, I’m not a fingerpicker of course, but it was hard to play, I couldn’t get through four bars of it and make it sound like him!”

You have long been associated with the Fender Stratocaster, with no less than two signature models to your name!

“I was very happy when Fender asked to do a recreation of my old ’63 Strat which is Fiesta Red over a sunburst. I have a couple of Strats like that. When a custom order came in Fender would blow a colour over a sunburst, they probably never thought anyone would find out. Things were looser back then! They look so damn cool though…

“The blonde Strat with humbuckers I actually just ordered from the custom shop. I wanted a maple neck with an ash body and I took a chance on those Lollar Imperial humbuckers. The guitar has 500k pots too, very nice and open-sounding – no coil taps, I don’t like having too many options. I use the vibrato so much and I like the Fender scale length but I have really been into humbuckers lately and with travelling and touring etc I wanted to get it all in one guitar. Then Fender decided to do a limited run which people seem to really enjoy!

Amp choice has always been a vital part of your sound, what are you using at the moment?

“My amps are by Fender – The Hot Rod Deluxes and Devilles. I worked with Fender on an ‘Inspired By’ version of the 2×12 Hot Rod Deville that’s been out for a couple of years now. It’s a simplified version of the amp with a list of modifications that I would do if I could have my wish. They took out the boost channel which no-one seemed to use that much anyway, so it’s a non-master volume amp. It does have two switchable preset volumes which is useful. They’re only 60w amps but they have a lot of headroom and they’re great for pedals.

“Tube amps have always been a common thread. I love that sound and response. Back in the 80s and 90s we all started experimenting with all that big rack-mounted audio gear. That was always a bit of a challenge. Those early units had this flat sound with no real dimension to it. I went through a short Rockman phase that was probably my lowest tone moment… I ended up using a reactive load so there was a real speaker in an isolated cabinet and from there you could get into all that crazy expensive digital gear – I was a big fan of Eventide and Lexicon at the time.

“Now I use a way smaller rig with a couple of pedal boards. Using two amps for a wet/dry approach is about as fancy as I get these days. Of course that does put you at the mercy of the soundman so you just have to hope he’s hearing what you’re trying to convey!

Fashions come and go when it comes to effects. What’s on your board at the moment?

“I’ve seen a lot of people exploring a hybrid of racks and pedals recently, it’s all out there, but the pendulum always swings back a little bit! I try and keep it pretty basic – There’s a Roger Mayer Voodoo 1 on there, a couple of Way Huge pedals – a Blue hippo and a Green Rhino, I have a Maxon SD9 and a Jack Rabbit tremolo and then a couple of Strymons – the Blue Sky and the TimeLine. They are fantastic.

“It’s been a while since there was a budget for carrying around a four-space rack! This stripped back approach has forced me to get creative and I actually like the tones I’m getting now more than I did back in the day with all that fancy rack stuff.”

In an arena where a musician lives or dies by their touch, you are renowned for an expressive style which relies heavily on bare fingers.

“You know I’ve been doing that for decades, I tend to tuck the pick in between my first and second fingers and it sits there for when I need it. It’s all about trying to make each note sing. With bare fingers you can play more sensitively and really dial it in for that warm, fat tone. The pick is necessary for other things too obviously. At the end of the day it’s all about the guy out there singing away on guitar!”

Liquid Quartet Live is out now on Mascot/Provogue.