Meet Muzz, indie-rock supergroup with members of Interpol and The Walkmen

As the New York trio reveal their long-gestating debut album, we talk to Josh Kaufman about stepping out from behind the producer’s desk, going direct and a guild of Guilds. 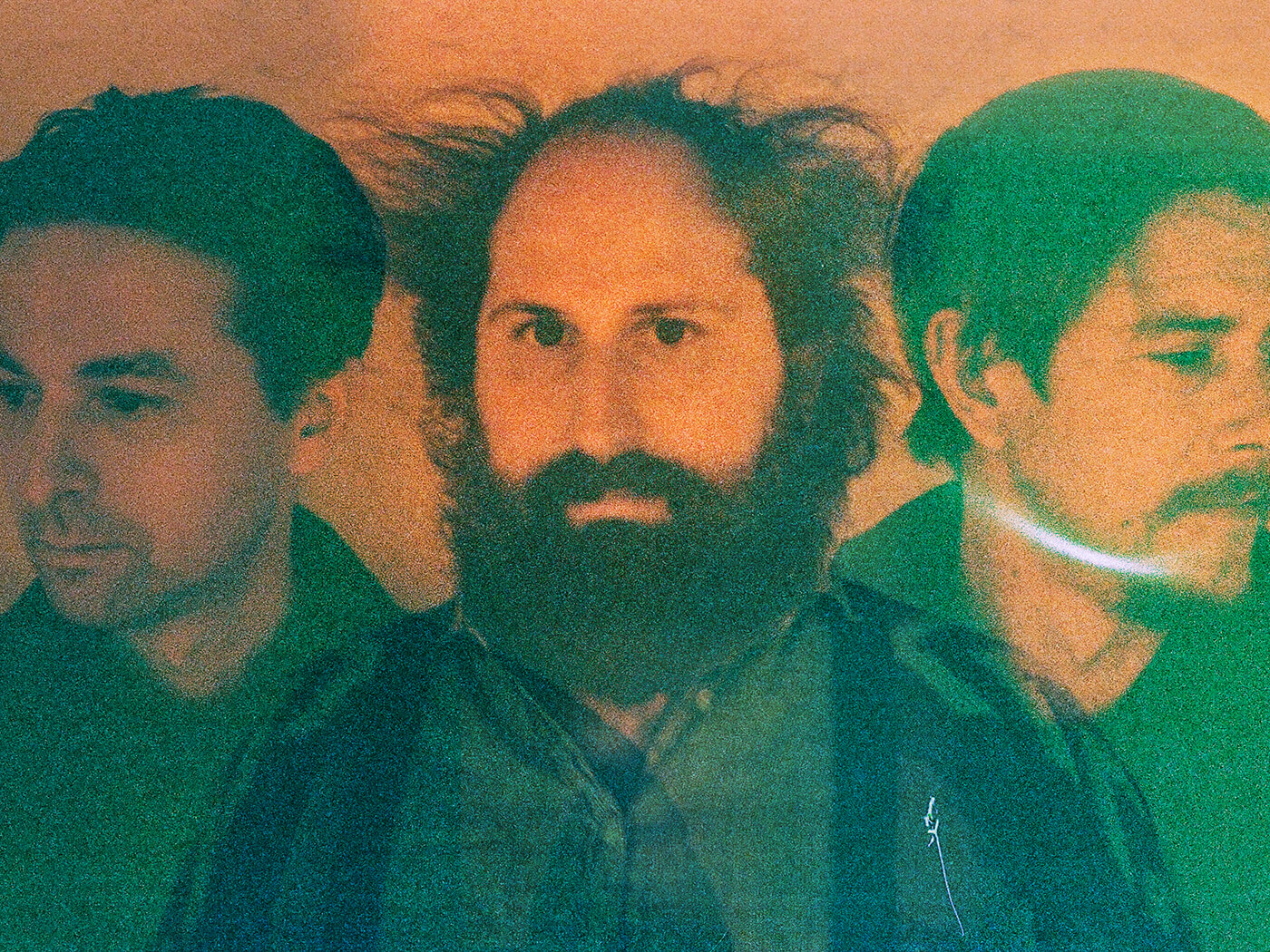 An exceptional plate of food might emerge from a restaurant kitchen with little more fanfare than a flash of steam and the thwack of a swing door, but the work behind it will be evident from the first bite. The arrival of Muzz’s self-titled debut LP has been similarly low key, only for its captivating blend of melancholic indie-rock to immediately betray the long game behind its creation.

A meeting of New York minds – Interpol vocalist and guitarist Paul Banks, polymath producer Josh Kaufman and drummer Matt Barrick, late of Jonathan Fire*Eater and the Walkmen – Muzz have been tooling around for half a decade at this point. Appropriately, their first album together has a lived-in quality, with its intricacies brought to life by the relaxed chemistry of the performances. “In the studio there’s so much leeway,” Kaufman says. “All you’re trying to do is express a moment in music.”

Kaufman and Banks have been friends since they were teenagers attending the same Spanish high school, later reconnecting after moving to New York in separate instalments. Barrick crossed their paths as a key cog in the city’s early 2000s indie-rock machine, eventually playing in Banks + Steelz (Banks’s project with Wu-Tang Clan supremo RZA) and sitting in on Kaufman’s sessions with Craig Finn for the Hold Steady frontman’s 2017 solo LP We All Want The Same Things.

Muzz began to coalesce in 2015 as embryonic arrangements were fleshed out jam-style, but it would take time for the trio to perceive themselves as a band who did conventional things like release records. “I think it was just the fact that we were feeling like there was something there to offer people beyond these sort of intimate conversations between the three of us,” Kaufman says of the decision to break into the open.

After spending sections of 2019 working on Finn’s I Need A New War and the riotous guitar blowout of the Hold Steady’s Thrashing Thru The Passion, Muzz offered Kaufman the chance to test his mettle as a composer and performer while also marshalling the troops from the control room. Rather than viewing them as competing disciplines, though, he prefers to zoom out and see them as complementary roles.

“I don’t know that I see a distinction,” he says. “I feel like when you put a bunch of musicians in a room, you’re kinda dealing with a co-production no matter what. If I’m producing a record, and that’s my job, then I’ll do my best to shepherd it, and to give my two cents, and try to advise.

“But, really, I’m just trying to sound good with everyone, sorta walking the walk a little bit. Like, ‘Maybe if I do my best to bring what I love to this, then that’s going to come out in the people around me too, and we’ll end up with something that’s better than the sum of its parts.’ That’s where I’m coming from. When I go in to work with Muzz, or with anyone else, I’m walking in the same way.” 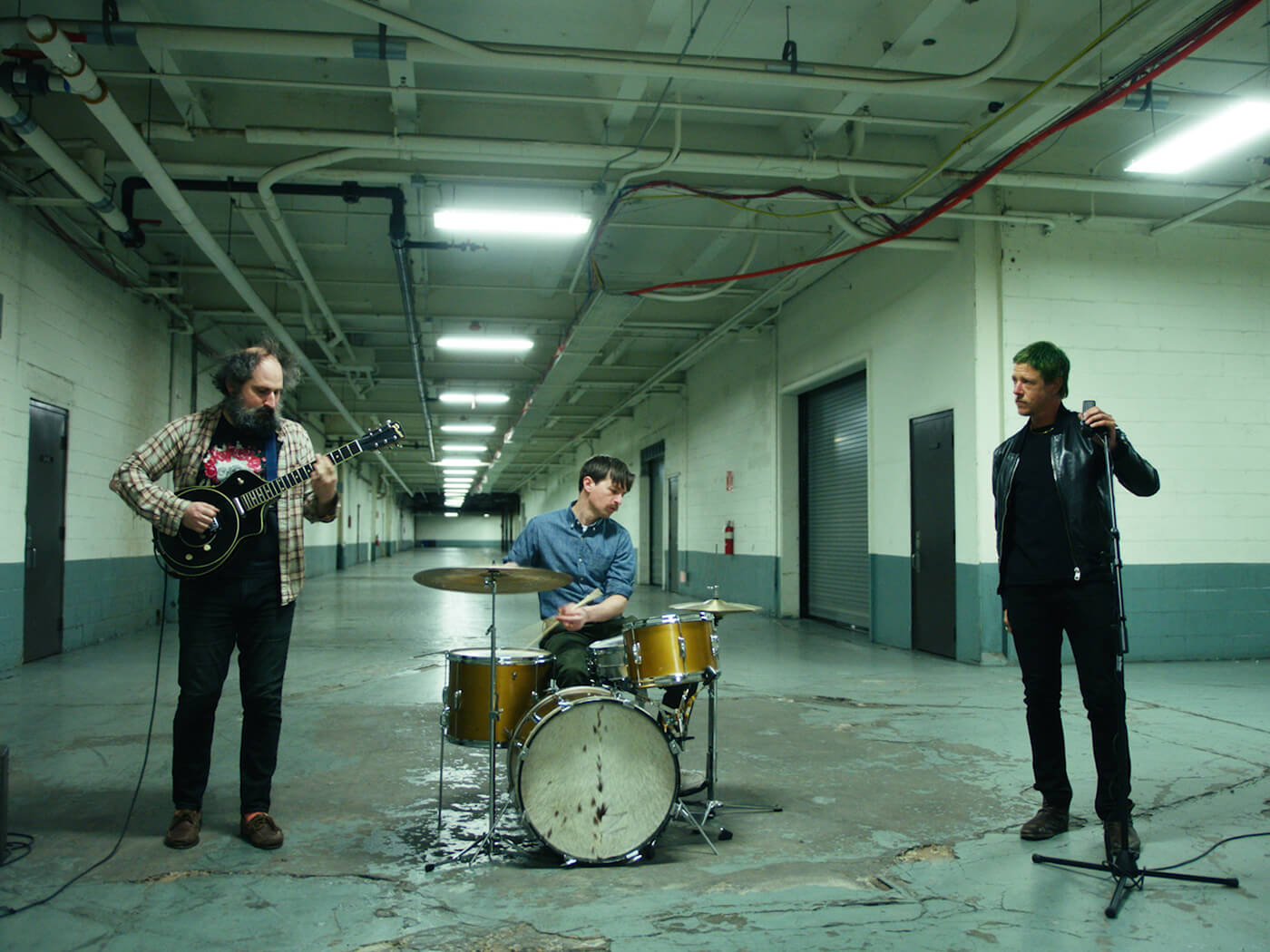 Here, Kaufman was tasked with facilitating the band’s open-hearted approach to collaboration. As a multi-instrumentalist he went from sitting at a blown out upright piano to laying down large swathes of the record’s guitars, while Banks and Barrick also embraced the lack of defined roles. “I don’t think anyone’s afraid of playing anything,” Kaufman says. “Sometimes we’re in a room together and we’re switching. Paul will hop on drums, Matt will hop on guitar, and I’ll play bass. Maybe I’ll sit at the piano, Paul will play guitar, and Matt will play drums.

“You don’t have to have the command over the breadth of the instrument that you would if you were sitting down to be a soloist. I think that’s been really helpful, and there’s not a lot of ego. Everybody’s open to one another’s creative strengths in the moment, however those might alter depending on what we’re working on. It’s always composition-dependent, right? You can get the most technically amazing musician to come and play something and you can be incredibly unmoved by it. I think that looking for the most moving contributions is usually the barometer.”

Muzz strikes gold in its combination of rich melody and desolate grandeur, landing somewhere between the gloom-pop of arch storyteller Bill Callahan and the National’s widescreen emotional inquisitions, the mechanics of which Kaufman knows better than most after collaborating with the Dessner brothers and Scott Devendorf as producer of Grateful Dead legend Bob Weir’s 2016 LP Blue Mountain.

“I think that’s the natural democracy of the three of us,” Kaufman observes. “We all lean in that direction, but it took a little while to find out that we lean that way. It’s funny, you sit in a room and you play something loud and rocking and you’re like, ‘Oh my gosh, that’s so much fun.’ And it is so much fun to have those releases. But then you go into the control room and listen to it back and go, ‘Man, I don’t know if I want to listen to this, though.’ There was a lot of back and forth about whether we were making music that we wanted to listen to. I think that was a big X on the map.”

The album takes a textural approach to its guitars, weaving delicate lead lines and warm ringing chords throughout songs that benefit from swelling strings and the washes of brass that have become something of a Kaufman go-to. “I think all three of us are passionate about the guitar,” he says. “Matt and I are really into older guitars, and more oddball models. I think that it was another voice.

“There are a few songs that we wrote as guitar parts, like Bad Feeling. That was a guitar [line] first and then Paul wrote to that, and Trinidad was a guitar part that Paul had, but for the most part on these songs the guitar was a voice. There’s a few songs where it’s like a strummy thing, but the foundation isn’t always guitar. It just helps with the mood of everything.”

Kaufman’s description of the guitar as a voice is apt but it also raises an issue for a band such as Muzz, who openly toy with the dreaded ‘supergroup’ tag. Banks’s bandmates are operating in tandem with one of indie-rock’s most recognisable and oft-imitated vocalists, adding an extra layer of consideration lest their guitar work stray too close to Interpol territory. “Maybe I have the advantage of understanding intellectually that it’s iconic to people, but then emotionally I’m just connected to my friend,” Kaufman observes.

“I’m sensitive to it, but I’m not afraid of it. We would build a kind of sonic world of tones that we really loved and then put a guitar line on top. Paul would write his vocal melody to that as harmony parts, or as a doubled part. A good example of that is the song Evergreen, where there’s this weird slide guitar that had been living for a couple of years. Paul had been saying he wanted to do something with it. One day we’re in the studio and he added the vocal to it in such a cool way. I had imagined muting that guitar, but he really liked it there as something to sing to. When I say that the guitar functions as a voice in this music, that’s kind of a way that Paul and I can sing together.”

In the studio, Kaufman ran the guitars through a relatively organic setup. He generated the record’s reverb and tremolo effects through a handful of Fender amps – chiefly Princeton and Deluxe models – and daisy chained channels on the console in pursuit of the correct amount of comforting fuzz. They leaned hard on the Guilds in their respective collections – Banks’s jumbo acoustic in open tuning, Kaufman’s Starfire IV and an S-90 fitted with a Bigsby – alongside a 60s-era Gibson 12 string, plus a handful of Telecasters, Silvertones and Danelectros.

“I also have a Strat that I like to play DI,” Kaufman adds. “It’s an old ’71 that I put Lollar pickups in. Man, they are so beautiful. The first time I got them in they were quieter than the stock pickups, and I was a little miffed. But, oh no. When I A/B’d them against older recordings I was like, ‘These are so beautiful.’ You just have to turn up the amp a little bit more and you get all this air.”

Actually, Kaufman devoting time to a new set of pickups and finding buried treasure mirrors Muzz’s slow-burn journey nicely. “Developing the sound of the band over five years or so, to use the parlance of right now ‘in quarantine’, it feels good to finally come out with it,” he says. “Unfortunately, we’re coming out into a vacuum. But I do think there are some benefits to that. People really need music right now, and maybe they are spending time more closely with it. I think there’s a light there.”

Muzz’s self-titled debut is out now on Matador.