“I didn’t want my negativity to be the thing that felt strongest on the record” Nathaniel Rateliff on dealing with tough questions on new album, The Future

The singer and guitarist on how Covid had him living in his garage, why he’s found his ideal rhythm guitar in a oft-forgotten Gibson, and trusting his gut instead of trying to please everyone.

As Nathaniel Rateliff pulled away from his place to head out on tour in February of last year, he knew that there were changes coming in his life. When he closed up the house he’d bought a couple of autumns earlier, just outside Denver, Colorado, he left it in the hands of workers who’d spend the following months remodelling it, bringing the living quarters in line with another area of the property that had received more of its care and attention up front: his home studio.

“I was only gone for 10 shows and came home and I had to move into my garage,” the Americana star says with a rueful laugh. That’s Covid, folks. By October, the upstairs rooms at the house were habitable, and at that point the wheels were turning out in the studio, too. The Future, his new record alongside his band the Night Sweats, is a pandemic piece that, from its title on down, funnels the uncertainty of the time into songs that try really hard to convince us that things will probably be fine in the end.

“It felt like pretty bleak times when I was writing the record,” he admits. “And I really didn’t want the vulnerable situation to be the focus, I didn’t want my negativity to be the thing that felt strongest on the record. So I kept trying to battle that stuff in the writing process. I don’t feel like I was writing from the perspective of having answers. I was just trying to deal with the questions coming to me at the time.”

Driven on by a grandstand vocal performance – all deadpan melody, riffs on Bob Dylan and Nina Simone, and gruff emotion dredged up from way down inside – the album is at turns very slick and reassuringly down home. On Survivor Rateliff finds the common ground between the two states, kicking things up a gear with a percussive, rafter-shaking hook that’s more Imagine Dragons than Crosby, Stills and Nash.

“I’m afraid that the weight of the world is catching up with you,” Rateliff sings at one point. “I’m afraid to admit that it’s catching up to me too.” Fittingly, he’s still not sure exactly where he stands on this knife-edge. “I mean, I feel like the narrative on that song in particular changes from time to time when I listen to it,” he says. “I’m like, am I actually just talking to myself, or am I trying to project onto the listener?”

Rateliff, whether he likes it or not, tends to ruminate on things. Prior to The Future his most recent outing was last year’s solo record And It’s Still Alright, a collection that dialled down the bombast in the wake of a divorce and the death of a central collaborator in producer Richard Swift. Moving back into Night Sweats mode was not just about an itch that he wanted to scratch – he also attempted to put himself in the shoes of his fans. “It kind of makes me get my head about what our audience is wanting or not wanting,” he says.

“I try not to let my insecurities get the best of me but, you know, it’s hard sometimes to focus on writing when I’m on the road, I really just switch into focusing on how the show is perceived. I work a lot with the engineer, also our lighting director. I ask a lot of questions. I don’t want to lose the sort of family feel we have, which makes us feel really genuine. But I want to continue to elevate what we’re doing. There’s always a little bit of discovery, because how do we continue to move forward? But I still want people to feel like we’re the same band that they’ve loved.” 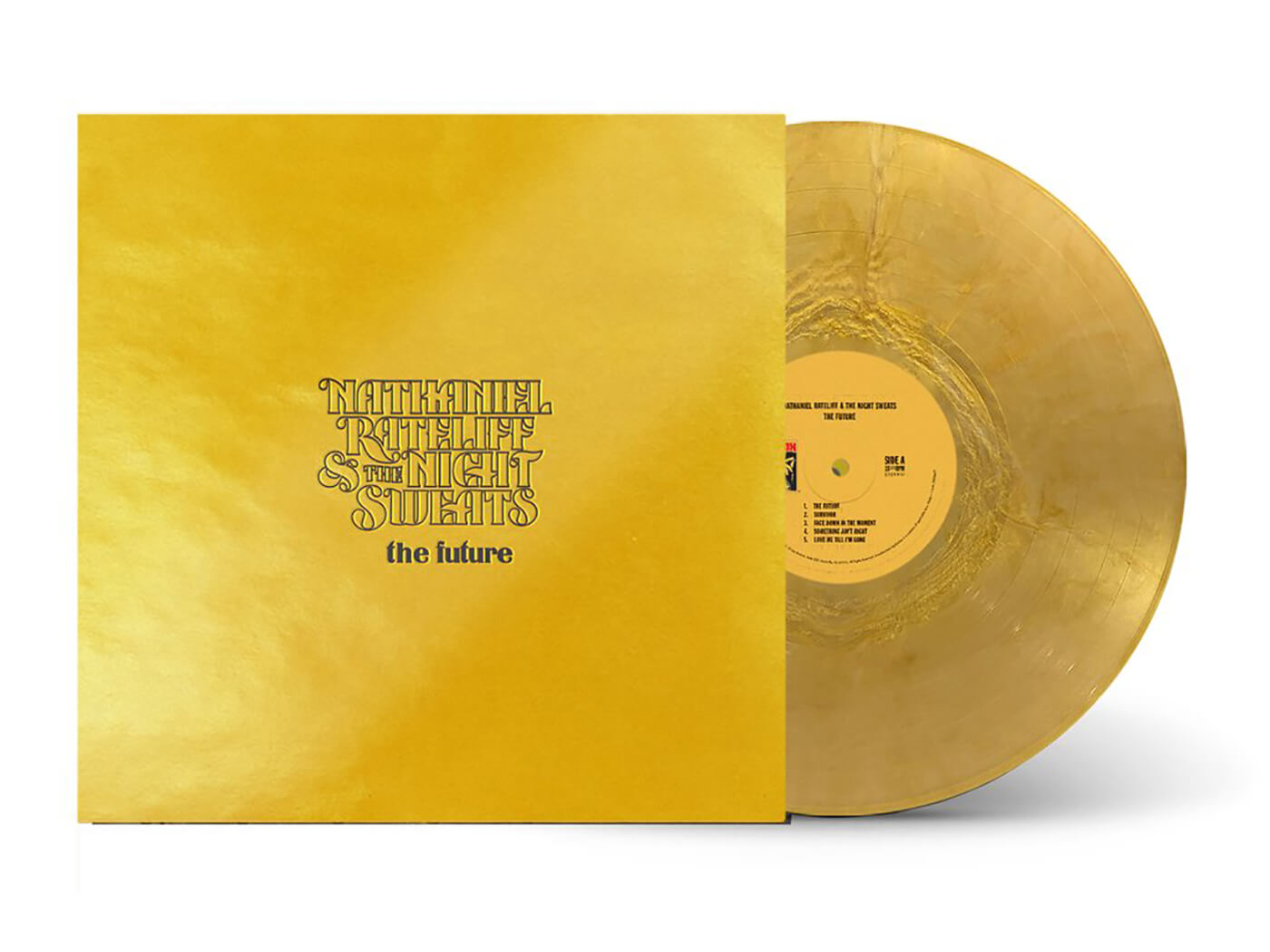 This is a difficult line to walk given how unashamedly huge some of these songs sound. The opening title track is a barnburner, navigating rich horn lines, ringing chords and Rateliff’s barrel-chested roar, but sure enough its opening acoustic-slide pairing lets a pretty solid Dylan vibe get its hooks in before the bells and whistles take over. There’s patience here, and also the sense that the players are comfortable moving between these poles. With Bradley Cook producing alongside Rateliff and regular co-conspirators ​​Patrick Meese and James Barone, the atmosphere was relaxed but purposeful, with the screws a little tighter than when Swift was steering the ship.

“I feel like capturing a good performance is kind of the key,” Rateliff observes. “I’ve worked a lot with Patrick and James and on our own we did a lot of mixing. But then once we got the mixes where we wanted, we took those to Brad and mixed even more. That was a different experience than what we had done in the past.

“Richard kind of did everything and with his approach there was a lot of looseness in the mixes.  I loved his style, but sometimes it also erred on the side of laziness. It was like, ‘Nah, that’s cool.’ Or [was it that] you don’t feel like doing it, you know? This time, I feel like we really tried to carve out a lot of space in the songs when it came down to trying to figure out the best way to EQ things so that all the parts can be heard and have their own space to live in.”

The guitars are almost left to fend for themselves, and one of the LP’s great strengths is the manner in which they respond by elbowing their way to the front of the line at opportune moments. Rateliff and lead guitarist Luke Mossman have an established rapport that comes into its own on the skittering Oh, I and while accenting the skipping keys of Something Ain’t Right. “Well, you know, I have a love for guitars and amps,” Rateliff says. “I always feel like I have a collection of different things going on. And then Luke comes over and we just kind of go through depending on who’s playing what part.

“Luke started playing slide not too long ago, lap, standard tuning, and open tuning. That was something I’ve always really loved to do. So we snuck that into the songs. I think both of us really like to use smaller amps. For a lot of rhythm stuff, I used a Gibson ES-320, which was kind of a weird model with single coils, through a Champ. When you’re recording live in the studio, a Champ at a lower volume or mid volume doesn’t take up too much space in the live room. I ended up using that a lot. I feel pretty lucky with the different acoustics that I have, between some older Martins and Gibsons.”

Rateliff hasn’t often turned to Gibson electrics in the past, generally favouring a series of Telecasters live, but the ES-320 filled a particular role here: it sounded just scuzzy enough to deliver the loose air they were searching for. “That is not the approach that most people would go for when you’re trying to find a good rhythm sound, but I kind of like the jangle of those guitars,” Rateliff says.

“There are some Teles in there too, some SGs, Les Pauls, a lot of stuff that I don’t normally play on stage. It was nice, since I was in my home studio, that there’s this collection of things that I’ve acquired over the years. That 320 made it on a lot of the songs, I have a ‘46 LG-2 that made it on a handful of tunes. I have got a couple of mid-60s Gibson acoustics that sound so great just strummed, for example there’s a Hummingbird on The Future.”

As album titles go, The Future asks quite a bit of its songs. In another writer’s hands it might be tongue-in-cheek or braggadocious, here it’s really just underlining the fact that the clock keeps ticking and Rateliff keeps thinking, revaluating and working. As big and unselfconscious as it can be at times, that kernel of truth is never far from view. “Well, I still continue to try to write songs that I like,” he says. “I think that’s my biggest focus. But I still, you know, consider ‘what role does this play In the ears of my listeners?’

“How do you keep your fans [satisfied] and still continue to grow as a musician and as a band? That can be a bit of a challenge. You’re not going to make everybody happy, in your band or in your audience. So, at some point, I just have to try my best and go with what my gut feeling is.”

Nathaniel Rateliff and the Night Sweats’ The Future is out now through Stax.