The Wilco guitarist gives us an exhaustive picture of how his collaborative album with Yuka C. Honda was recorded. 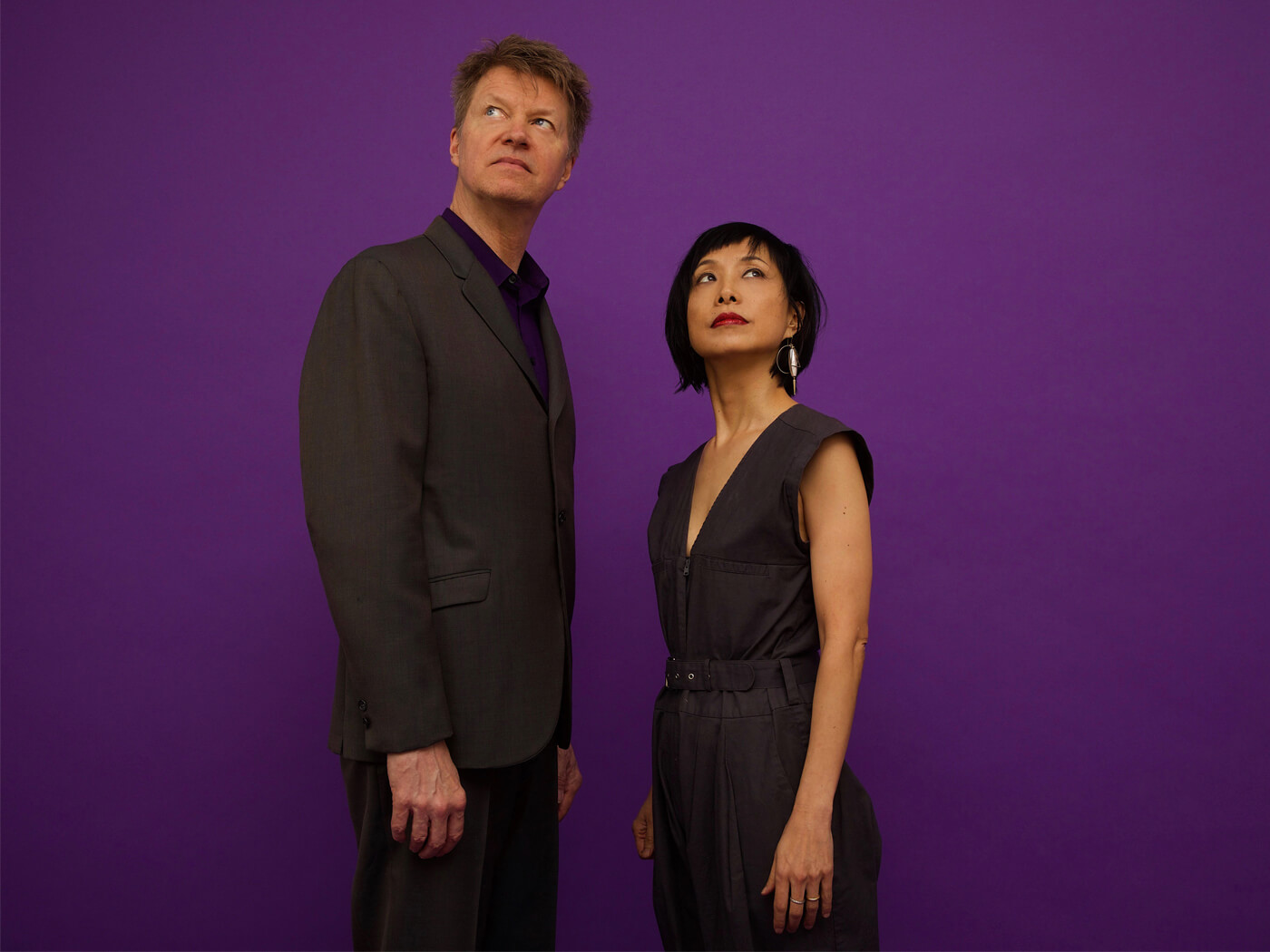 CUP are the duo of Nels Cline, also the guitarist of Wilco, and Yuka C. Honda, co-founder of the alternative pop group Cibo Matto. The creative couple – they are married – have been performing together for years, but today, they release their first studio recording, Spinning Creature.

Both Cline and Honda sing in CUP. Honda also plays various keyboards and the Tenorion (“a fascinating instrument,” Cline explains to Guitar.com, “made by Yamaha Japan but no longer in production”). She also does programming, sampling and production in real-time and in post-production. Cline – in his words – “predictably” plays electric and acoustic guitar and makes loops.

“CUP differs from other projects I have done in that a large portion of our ‘live’ performances involve playing to tracks,” Cline explains, “though Yuka can and often does alter/manipulate these tracks in real time during our concerts, utilising Ableton and whatnot. A lot of what we do is still improvised and/or open-ended in terms of structure and length, so flexibility is part of the deal.”

Cline and Honda made Spinning Creature with their “wizard engineer friend” Eli Crews in one of their favourite places, the tiny basement studio at Figure 8 Recording near their Brooklyn apartment. It was recorded in the course of three days, a speedy and efficient process that Cline credits to those aforementioned ‘live’ experiences. “Add to this that we could utilize the studio,” he adds, “and that Yuka could work in her studio doing post-production sound design, edits, and elaborations that are part of her uniquely wonderful approach to music (she likes to call this ‘Eucademix’).”

Cline gave Guitar.com an exhaustive breakdown of four songs on Spinning Creature. Read on for more about CUP’s creative process and the myriad pedals and instruments that were used on the record.

The opening song, Every Moment, is essentially our invocation. It’s basically a rubato drone piece, C Mixolydian. The drone was created by a combination of a reverse guitar loop on my vintage Electro-Harmonix 16-Second Digital Delay and various keyboard and Ableton sounds created by Yuka.

As my singing and simple bamboo flute-playing flow in and out of my guitarwork in “free time”, vocals, flute, and guitar had to be tracked together in real time. What I can’t recall now is whether or not that actually worked out! I may have had to overdub/fix a few parts at the beginning, but by the piece’s end I know that the voice and guitar were tracked in real time. I played my “New York” Fender Jazzmaster – a quite distressed 1959 instrument I purchased from Southside Guitars when I started living in New York, as my favourite Jazzmaster (“The Watt”) lives in the Wilco loft (I got tired of flying back and forth to Chicago with it).

I think the overdrive on this track was a Seymour Duncan 805, though it might have been an SMS Earth Drive. I tend to switch between these two when I’m home, and my beloved Klon Centaur is frankly too large for my non-Wilco board (when playing my own music and/or improvised music projects, everything needs to be small to fit into my travel case that I drag around with me). I start the song with a clean tone, compressed with my usual Boss CS-2, and move into overdrive later in the piece as things ramp up. As is usual for me, I am constantly using a volume pedal – in this case a Boss FV-500H. Reverb that I printed was from a Red Panda Context, and delay was a Boss DD-3 (as usual. I have used these for so long I can dial in settings in the dark, which is very handy, believe me).

On the brief bridge (“Never cared as much as now…”), I added a low octave on my guitar part with my old Digitech Whammy 1, still my favorite of all the Whammy iterations. The amp I used on the whole record was my favorite recording amp here in NY, a little Studious Selye 1X12 combo with a cabinet made out of aromatic cedar (!). The Indian bells were overdubbed – I only have two hands! Our invocation flows into Track 2, Berries…

This is a far more complex track and eventually involved a hefty amount of Yuka’s post-production “Eucademix”. The rhythm track was created (and always is when we perform this song) by Yuka on the Tenorion. I wrote the opening theme/chords and the lyrics. Yuka added the repeating chant of “berries… berries”, like some kind of sample of my voice, in post-production. Again, I am playing my ’59 Jazzmaster, Boss compressor.

A lot of what sounds like crazy post-production manipulation in the first few minutes of this song is actually me looping “on the fly” in real time with my trusty EH 16-Second DDL – something I have done/used since 1985 after Bill Frisell showed me his. There is also another sound that emerges – a sort of burbling, glitchy loop – that was made by my Montreal Assembly Count To Five. I totally cheated and made this loop prior to tracking the song, though the back-and-forth between it and my spontaneously-created 16-Second looping was done in real time. When tape delay sounds effect the loops, they are always created by my trusty Korg Kaoss II, which is second-to-last in my chain. Vocals come in which were, not surprisingly, NOT recorded in real time, and are a composite of two of me an octave apart and one of Yuka, if memory serves. I still find it hard to play the guitar part and sing this song at the same time! And yes, you better believe there was some pitch correction of my untrained voice!

Anyway, what ensues after the brief vocal assaying of the theme is an amalgam of ‘live’ playing and all the bits that Yuka later chopped up/moved around/rearranged. When we play this song ‘live’, I eventually come in with a 3-bar ostinato with low octave Whammy added – sort of fake bass. With the luxury of a recording studio, I played an actual bass that was at the studio. Figure 8 has tons of cool gear of almost every variety, and I apologize for having no recollection of what bass it was. I forgot to bring ours… As the piece progresses, both ‘live’ and in this studio recording, Yuka keeps adding new and ever more complex rhythmic subdivisions on the Tenorion to this extended coda jam. And, in her “Eucademix” mode, disassembled my 3-bar bass line, making the first apprehensions of it in 4/4 and in an almost random/intermittent pattern.

I also added some clean, David Byrne-esque chicken pickin’, just playing the tonic ‘G’, which Yuka also dissected and which pops up all over the place. She then added all manner of synthesizer parts (the studio has an amazing collection of vintage synths, many of them owned by our engineer Eli). We build up to the 3-bar ostinato in its un-edited form as our voices chant “a tisket, a tasket” over and over again, which was Yuka’s idea and which still delights and perplexes me. Then it all comes to an abrupt halt. One could dance to this piece, by the way!

Soon Will Be Flood

Soon Will Be Flood is an excellent example of the true coming together of Yuka’s and my sensibilities, I feel. This was initially an improvised jam over a pretty deep, percolating neo-disco/house-type of groove that Yuka got going with Ableton drums plus her Moog DFAM and god knows what else. It’s more of a groovy event than a song, per se. As we listened to it in its rough form, I recall singling out sections that we liked, that “worked”, and then, after the fact, adding contrasting tonal elements such as the fingerstyle guitar part that appears at around 2:25. This was Yuka’s idea, I think.

I found the tonal center of this section, put a capo on either my old Silvertone 1457 or my kit Jazzmaster that John Woodland put together for me years ago that has Seymour Duncan custom order PAFs that look like Jazzmaster pickups (can’t remember which guitar right now, sorry), and added it. And please don’t ask me what fret I put the capo on, because I’m too lazy to go back and figure it out! The big, clean cluster chords that I play towards the beginning were created by putting my Whammy pedal on some sort setting – maybe 4ths or slightly de-tuned 4ths. And the main guitar was, again, my old Jazzmaster.

The piece has all manner of sonic elements darting around, such as Yuka’s voice through a vocoder, mad loops from my Count To Five, ethereal washes of keyboard, and me using an Expedition Electronics 60 Second Delay, which works almost exactly like an original EH 16 Second DDL, only laid out differently and with some interesting “extras” (check it out!) …

Ultimately, Yuka took all these semi-raw elements and created what you hear as Soon Will Be Flood in her studio. My adage when Yuka and I are in this kind of collaborative mode with an open-ended groove and a mutual desire for some cool flavors/editing is “go for it!” – I let her do anything she wants because when she ultimately plays it for me, I am always delighted. And one could dance to this, too!

The title track Spinning Creature was recorded many weeks after our initial two-day session because, well, I got an idea… I wanted one more “song” on the record (a couple of the tracks are jams/freakouts that Yuka edited/reconstructed – see my previous entry…), and I had a melody and mood in mind. Yuka and I wrote the lyrics together.

This song is unusual for CUP in that it A) features Yuka and me singing together throughout, and B) is formed around an acoustic guitar, in this case my beautiful little Collings 02H 12-string (one can see it in the video Yuka made), and it is the only guitar on this song. Spinning Creature is a real production number in that pretty much none of it found us recording together ‘live’, which I suppose could have been mentioned earlier as something unusual for CUP.

I tracked the 12-string to a click track, then sang my basic vocal part. Since we were confidently “on the grid”, lots of “Eucademix” plus vocals, percussion, Tenorion, and keyboards could be added and subtracted later as necessary. I overdubbed all the ‘real’ percussion, and Yuka added the Ableton drums and sampled bass parts on the chorus. Our initial thought was to end the album with this track so, since it’s in C major like Every Moment, I thought it would be cool to bring back Yuka’s drone, some bamboo flute and bells from that track at the end, making the whole record a circle of sorts. But we ended up changing our minds/the sequence! It still works for me, though.

As was the case with Berries, Yuka spent hours in her studio adding sounds and ideas – in this case while I was out on the road with my quartet The Nels Cline 4. When all the pieces seemed in place, Yuka went back to Figure 8 with Eli and mixed it, and I listened to various mixes while touring. And then: it was finished!