“Guitar is like a binding element”: Nilüfer Yanya on straddling genres, Jazzmaster in hand

A year on from her debut EP, we caught up with the genre-agnostic guitarist to talk luck, lockdowns and the challenges of being a non-touring musician.

The playing card that sits on the sleeve of Nilüfer Yanya’s Feeling Lucky? EP has seen some things. Dog-eared and creased, it’s sealed as many desperate fates as it has sparked moments of wild, disbelieving excitement. From feeling like your luck is out to last-minute reprieves, this dynamic is hard-coded into the record with songs that ask whether we’re looking at the idea of good or bad fortune the wrong way.

“It’s these two energies, and we don’t really have any control over them,” Yanya says. “But they can control a lot of what we do – the luck element. A lot of the time we’re not thinking of it. We think it’s all down to us, or down to other people. Sometimes things just don’t turn out the way you expect them to, and sometimes they turn out better. Some people tend to be very appreciative of it, but some people do the opposite: ‘Well, you know, I was just really lucky.’ I think it’s about balance.”

it’s quite refreshing just to put new music out and not have to build up towards it. Just do it. The next day you’re free to think about other things

Feeling Lucky? is a short, sharp shock of a release that finds Yanya refining her work further following the arrival of Miss Universe, a debut album that anointed her as one of the most exciting new voices in British music through its blend of fuzz-pop brilliance and heavy-lidded R&B-adjacent jams. Its three tracks are picture-perfect examples of her writing, melding clever, immensely hooky guitar lines together with complementary synth flourishes and electronic percussion.

But where Miss Universe was a quasi-concept album that luxuriated in skits and set dressing across an 18-song running order, its follow up is far more interested in the here and now. It is a snapshot of Yanya’s current creative preoccupations that takes cues from the rapid-fire series of EPs she released between 2016 and 2018. It’s a format that feels comfortable. “I prefer it, I think,” she says. “I’ve done a lot more EPs. I’m more used to it.” 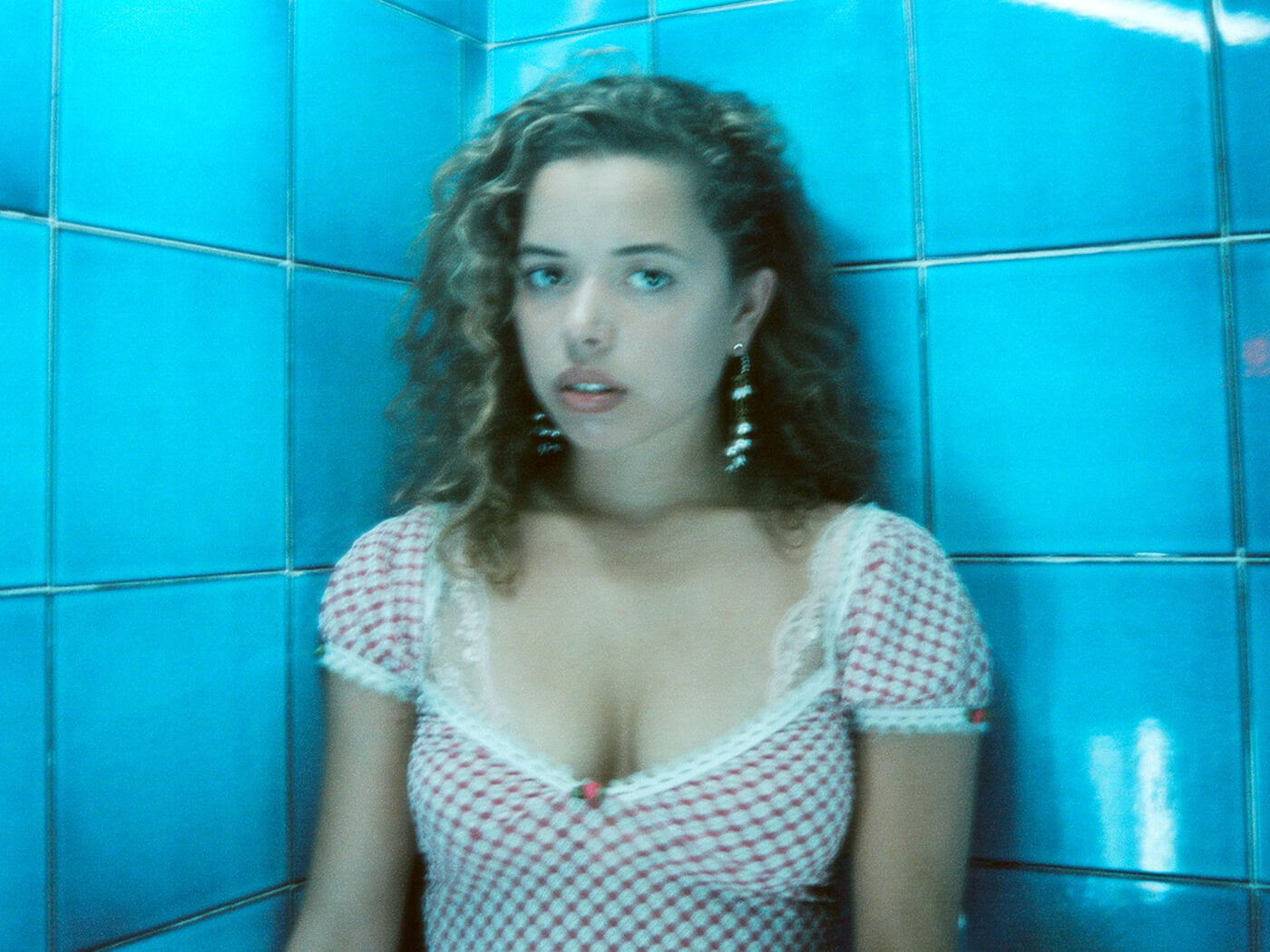 The elephant in the room is the same elephant that’s in every room right now: COVID-19. Work on Feeling Lucky? couldn’t proceed in exactly the same manner as work on Miss Universe, but the lessons Yanya learned from crafting that record as a studio beast were carried over. In a sense it’s about being adaptable and refusing to cling on to a single way of getting the job done. “I’d written some of the songs in the studio for Miss Universe, which was new to me,” she says.

“Normally I write by myself or at home and I’ve lived with a song, at least played it with the band in rehearsal, if not at a show, before taking it to the studio. By doing that album in reverse, when you take things on tour you find that some of them just don’t work the way you’d think they would work. Maybe you haven’t got the right arrangement for them.

“It was interesting to see that, and with this EP they’re all studio-based songs as well. I have a feeling they’ll work quite well [live]. On the album I was also trying to push myself, trying new ideas all the time, trying to change it up and keep it interesting. With the EP I don’t need to worry about that as much – it’s a collection of the best things I’ve written this year.”

Day 7.5093, the third song on Feeling Lucky?, made its debut in the most 2020 manner possible: as part of a live stream. Back in July Yanya performed for NPR’s Tiny Desk Home series, pausing after playing Heat Rises to acknowledge the aftermath of the killing of George Floyd by Minneapolis police. “One of the things that’s been on my mind a lot is the racism and violence and injustice going on towards Black people and people of color, not only in America but here in the UK and all over the world,” she said.

Yanya also noted how strange it was to be promoting her music while the world was in turmoil, and that’s not an observation she’s moved away from in the intervening months. Sitting in front of a camera, being greeted by piercing silence, is no way to road-test unheard material. But there is a silver lining to be found with the way it ties into the EP’s of-the-moment focus.

“I found the livestreams a bit hard to connect with,” she admits. “There’s nothing to bounce off. It doesn’t really feel like anything happens. But it’s quite refreshing just to put new music out and not have to build up towards it. Just do it. The next day you’re free to think about other things. You don’t have to do the whole press thing, a show around the EP. It’s like, ‘Okay, what do I actually want to do now?’”

Yanya was raised in a creative home in West London by artist parents of Turkish, Irish and Bajan heritage, and her family is a key feature of her story. Her uncle, Joe Dworniak, is a noted session musician and producer, and it was at his Cornish studio that Yanya’s earliest work came into focus. So too much of Miss Universe. Continuing a long tradition, the video for Feeling Lucky? single Crash was helmed by her sister, Molly Daniel. The forthcoming promo for Same Damn Luck was even more of a close-knit affair.

“With Crash we just did it in a studio in London in one day,” she says. “I was just thinking about ways to embody the song, and we took it literally, making it on an aeroplane. We just went with that. With Same Damn Luck, we went to Greece. It was so nice. My cousin, who’s a DOP, came, my younger sister came, my mum was doing set design. It was kinda like a road trip. It was more about different textures, sort of like a constant mood board. It was mad to be able to do a video like that instead of thinking about storyline all the time.”

Musically, Yanya’s collaborators on Feeling Lucky? ticked boxes marked ‘old’ and ‘new’. Having worked on Miss Universe, songwriter Will Archer returned to help bring Same Damn Luck to life, while another old acquaintance in electronica producer Bullion was drafted in on Day 7.5093. Yanya was drawn to the aesthetic of Brooklyn songwriter Nick Hakim, whose work fuses gloopy psychedelia with decaying tape hiss, to add a chunky, distorted edge to Crash.

“With Will this one was a bit different because he had a guitar loop for the verse and we basically wrote the song over that. It’s more like a pure collaboration,” Yanya observes. “With Nick and Bullion, it was more like bringing a song to them, which was kind of there but not really, and working on structure, instrumentation, arranging it. You can get so much out of just doing that with another person. Everyone has different ideas.

“With Crash, it’s really simple chords. You could play that a million different ways but it was really fun in the studio just to do one or two takes. They were really messy, but they had the right energy and vibe. We just went with that, and with loads of distortion and gain you can’t really make out what’s going on. I’ve always wanted to play around with that idea as well, of going into more defined tonal work. It was really nice to do that with Nick and Bullion, and the part lends itself to that anyway.”

Having spent much of her early career playing Stratocasters, Yanya has traded them in for a Jazzmaster of late. It’s all over Feeling Lucky?. Something that hasn’t changed, though, is the almost alchemical relationship between her voice and guitar. Yanya’s music is defined by the manner in which she finds pockets of space between undulating lead lines, and rarely in the past has she achieved such a perfect balance as she does on Day 7.5093.

Its setup is weird, like holding a circus mirror up to a garage-rock riff, but it makes complete sense in her world. Existing fans will eat it up, while newcomers should look no further for a way in. “If I write by myself, that [guitar and voice] will be the first part of the song,” she says. “It’s like a binding element.”

If I write by myself, guitar and voice will be the first part of the song. It’s like a binding element.

When Yanya first began making waves there was the usual bout of music critic hand-wringing about what genre she best fit into. Increasingly, the fact that she’s both a Pixies fan and a purveyor of atmospheric, groove-driven alt-pop is irrelevant. It just feels like her, and it’s exciting to wonder what styles she might bend to her will in future.

“With these songs, although they’re different in terms of being records, I like them because of the songwriting,” she adds. “It’s not because I think I’m being clever, it’s just about the song. I’d like to keep moving forward in that direction, just putting out your best work and not having to fill in the gaps or make it sound more like this or that.”

Nilüfer Yanya’s Feeling Lucky EP is out on December 11 through ATO Records.