Much like most musicians and bands over the past 18 months, NOFX saw their plans quickly go up in smoke along with the global pandemic. However, that extra time to sit with their work allowed the band to scupper their plans for a double album and instead replace it with something that’s characteristically unpredictable, and maybe even confusing. “I was writing really different songs, and some fun songs, but you have to make a double album interesting enough to listen to the whole way,” Fat Mike reflects. “I wanted to make a perfect double album… I didn’t accomplish that.”

Recorded in San Francisco with Jason Livermore & Black Flag’s Bill Stevenson, the songwriting on Single Album is some of the band’s most reflective and personal to date, whether that’s in the heartbreak of I Love You More Than I Hate Me or the impressively meta send off for fan-favourite Linoleum via the partial-rework, Linewleum. Indeed, even the guitar work is brazen. Take the six-minute hardcore opener, The Big Drag, which Mike has declared his favourite NOFX song ever due to its constantly changing rhythm patterns. Elsewhere you’ll find songs written in a haze, with guitars riffs and vocals refusing to match up or the inclusion of inverted chords and structures in the aforementioned I Love You More Than I Hate Me.

14 albums in they might be, but NOFX are still discovering new ways to challenge both themselves and their adoring fans, which can’t be said for all punk rockers at this stage of their career. Below, Fat Mike picks out his favourite guitar parts on Single Album. 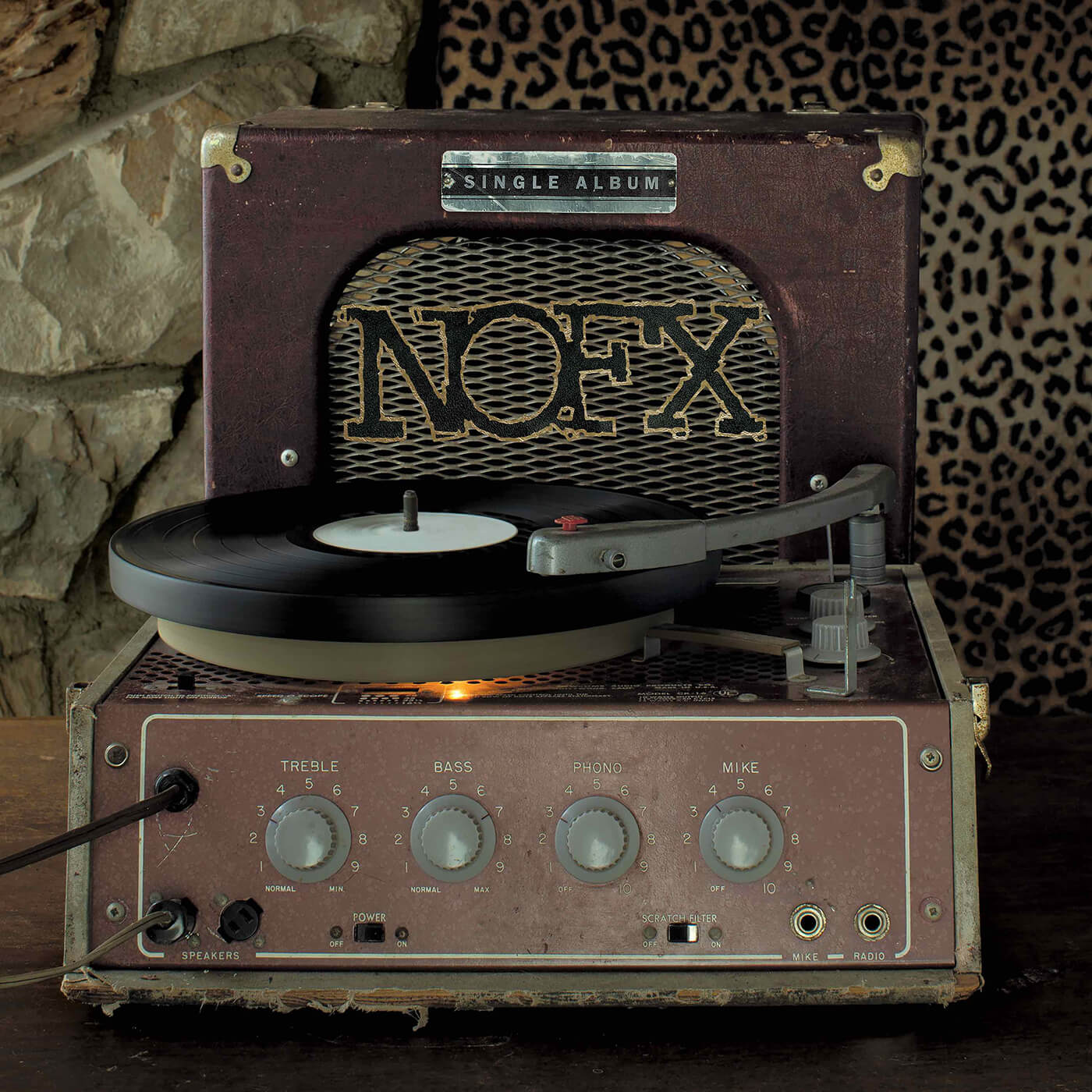 “The Big Drag was influenced by Rotten to the Core by Rudimentary Peni. What’s interesting about the guitar riffs is that every time the chord changes, so does the rhythm. Every C has the same rhythm, every G has the same rhythm, but each chord rhythm is slightly different. As for the bass, it never really lands on any one note. When the drums kick in, the bass pretty much just slides up and down the neck causing the listener to feel on edge the entire time. That kinda thing makes me very happy. Another interesting fact about this song is that no measure is the same length. I wrote the lyrics first, and then I just made them fit melodically with the chords by playing the single chords for as long as I felt they should go. Once again, it’s supposed to give the listener a sense of uneasiness. This is one of my favorite NOFX songs I’ve ever written. It is next to impossible to play live because there are no rules and no patterns. It’s a free-form song. I can’t name another song that sounds like it… but then again, I hardly ever listen to music. Oh, and around 1:30, it modulates a half step down. This is another way to make people uneasy. Yes! Both guitar tracks were recorded on a Silvertone amp with a ‘72 SG.”

Fish in A Gun Barrel

“What makes Fish in A Gun Barrel unique is that while the guitar rhythm is fairly straight, the vocals come in in a different place every time I sing a new stanza. The first time the listener hears the song, the guitar and vocals sound like they’re off time. They’re not; it just took me hours and hours late at night on cocaine to figure out what the time signature was gonna be. I actually felt like I was going crazy while writing this song. Right at the beginning of the song, I start singing one-quarter note too soon. It’s all done for a reason. To make the listener feel like the guitar didn’t play the correct number of strums! The guitar used was a Fender ‘74 Jazzmaster (which is the guitar used on most NOFX songs) played through a Silvertone and a Marshall JCM800.”

I Love You More Than I Hate Me

“In I Love You More Than I Hate Me, the guitar riff at the beginning is played with all inverted chords on the E string. I guess this is pretty common, but not in punk rock. In punk rock, the three-string power chord is king. The chords I use in this song are very rare for the genre.”

“Linewlium is a unique song because it’s about retiring NOFX’s most favored song, Linoleum. I don’t know if that’s been done before. The main guitar riff is kind of the NOFX signature super-fast, palmed metal riff but it’s played on two strings instead of one. The weirdness comes when the first two chords and melody are the same as the original song, then the chord progression, melody, and lyrics suddenly change. It was written to fuck with people’s brains, and it worked. The guitar sounds and melodies are so familiar, but they keep changing. This song makes me happy for the same reason The Big Drag does… it confuses people.”

“The last song on the album is called Your Last Resort. My favorite part of the song is when I sing the line, ‘We were strapped down with minor cords as we set sail into the dark and sharpest sea.’ The cool part is that I hit a C sharp minor at the end of the line. Get it… sharpest sea! Well, I thought it was pretty cool. Also, towards the end of the song, we hit some crazy drum rhythms that make it super hard to pull off the matching guitar riffs. Definitely the most difficult and time-consuming guitar playing on the record. It took hours to play a 15 second part. It was worth it…”