From the tasteful design to the reinforced one-piece neck, we dive into the creation of the new Josh Smith SL7 and how it all started with a cracked neck. 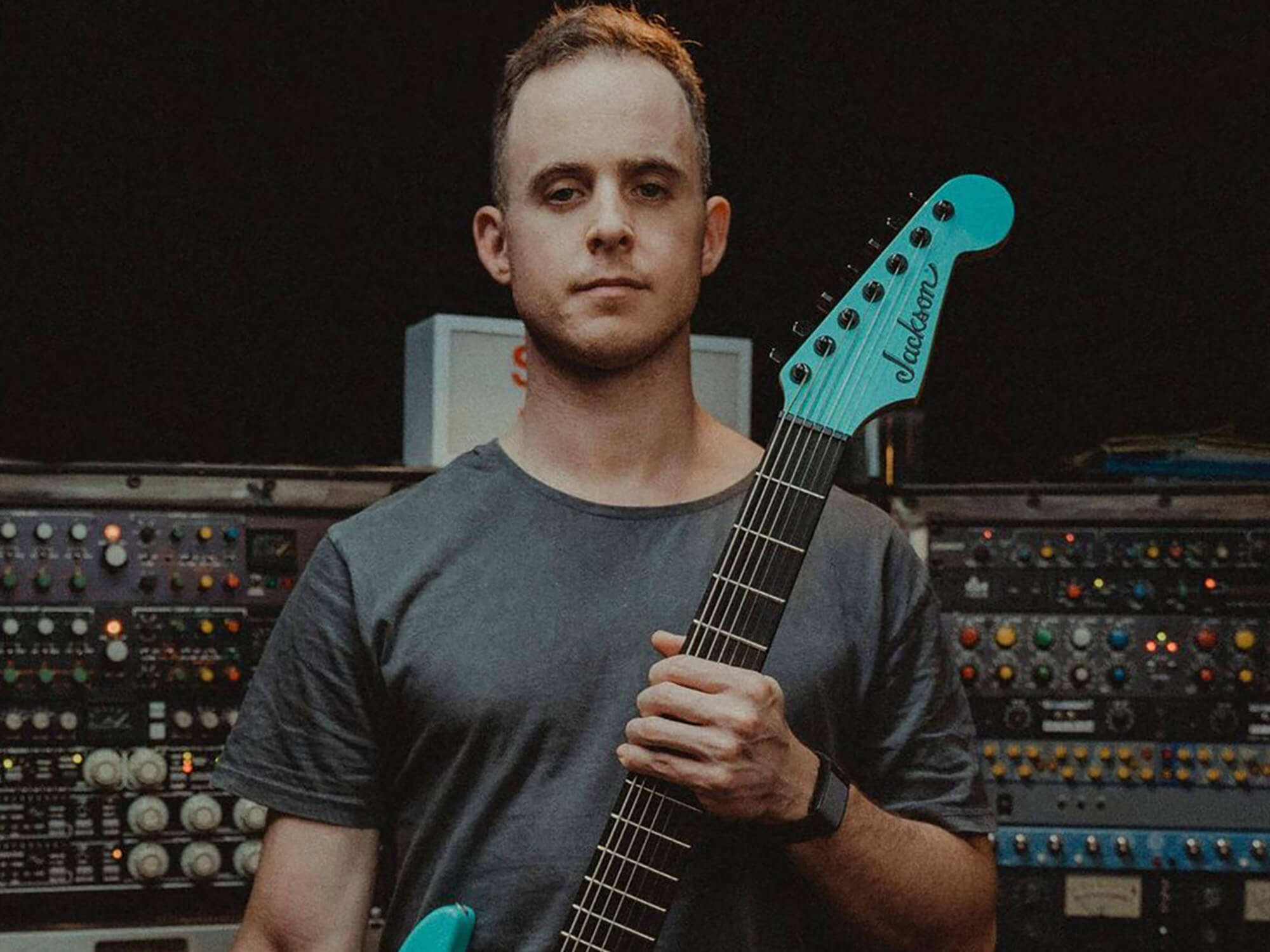 The story of Jackson’s collaboration with Northlane’s Josh Smith – like a lot of good stories – begins with the breaking of a neck. A guitar neck, luckily, but still an inciting incident: “We were playing in Montreal and I took my guitar outside from our trailer,” Josh tells over zoom, appropriately enough calling from a sunny spring day in Melbourne. “It was minus 15 degrees celsius outside, like a proper blizzard. And then I brought it into the venue, which was 25 to 30 degrees, and humid. The neck just cracked.”

“The guitar had this fancy wenge-maple five-piece neck, and also 200 pickup voicings, three of which are the only ones that I ever used,” Josh tells us. “Then and there I was like alright, I need to get in touch with Jackson.”

Why Jackson? “I had to play [Veil Of Maya’s] Marc Okubo’s guitars then, and I thought they were fantastic: just everything that I needed. I had a Jackson B7 in my hands about two or three days later, and I never looked back.”

Now, the results of Josh’s close relationship with Jackson are here: the Pro Series Josh Smith Soloist SL7. Getting away from those 200 pickup voicings and over-constructed necks, Josh tells us the core approach he wanted to take was simplicity. “These are not over-the-top guitars with features that you’re never going to use. They’re built to do one thing really well, and they just happened to do a lot of other things really well, too.”

Josh’s signature is presented in an understated seafoam green finish with a Stratocaster headstock – no weaponised pointy bits or none-more-black aggression here. “A couple of years ago, I ordered a Custom Shop guitar from Jackson – a Soloist model that had a Strat headstock on it,” Josh says, and flips his camera around to his guitar rack to show us. “That guitar, in part, was the basis of the signature model. Me and the Jackson team loved the look of it – this ‘classic/modern’ take on a baritone seven-string: it was kind of unique, like there’s nothing else like it really.”

“So, I started playing it live a lot. I actually preferred the body shape to the B7s that I’ve been playing – I found it a little more ergonomic. Then I had some 29.5-inch scale guitars made with that same Soloist body shape. I used three-by-four headstocks on those because of the length, to minimise the neck dive. In hindsight, I don’t really think it makes a difference at all,” Josh says, and laughs. “You’re talking about grams of wood. So if I get another 29.5-inch scale guitar, it’ll have a Strat headstock, because I just think it looks so sick.”

By the time he was road-testing the custom build, Josh had the specifications for the signature basically nailed down. “I was at a point where I was just experimenting with body shapes, really, because everything else that I’ve been using, I figured out a very long time ago, what works for me as a player, and what I want on a guitar that I take on the road.”

“I found that the more complicated a guitar was, the more likely that something on it was going to break. When you’re playing for three to six months of the year all around the world, that stuff happens,” Josh adds, recalling the Montreal incident.

A simple guitar also makes for an easy mod platform. “I’m all about that,” Josh says. “If people buy my signature guitar, and they want to do their own thing to it. A really long time ago, when Northlane wasn’t making much money, I used to work as a guitar tech for other bands and local people in my area – and I was always modifying my own stuff. I think it’s the best way to get in tune with your instrument: to rip the guts out of it and put it back together how you see fit. So I did that a lot, a long time ago, and found what worked for me and just stuck to it.”

The minimalist nature of the signature extends to the nature of the pickups. “They’re my signature Bare Knuckle set – the bridge pickup especially is really flat, neutral sounding. It’s got like a really tight bottom end to it and a very flat midrange – there’s no accentuated frequency. A lot of guitars these days have pickups in them that really push the high mids, especially for the modern metal sound. I don’t think you need to do that – if you want that sound, wait until you get to the rest of the signal chain.”

With that in mind, the flat response of the pickups allows for the guitar to play nice with the classic combination of an overdrive pedal in front of a high-gain head. “For the last two records, the amps and pedals were just J Rockett Archer into my Diezel. That was it. And live, we’ve just gone over to neural DSP. And most of it is just that exact same signal path as a patch, using a cab impulse from when I recorded it.

With his own guitars, Josh tells us that the biggest thing that changes between this is the scale length, depending on what (brutally low) tuning they’re in. “For the 27-inch ones, I play from G♯ down to F. We sometimes go lower than F – like on our last two records, we had a lot of songs in D♯.” Yes, that D♯ – one semitone below a standard-tuned bass. “For that on the Alien record we used 27-inch guitars to do it, sometimes with pitch shifters. When that record was done, I wanted to try something a bit longer for these specific songs, so I went to 29.5 inches. Those were used sparingly – I would say 75 per cent of what I’m playing is on a 27 inch scale seven-string. And it’s a lot more comfortable: Once you go past 27, things get a lot more difficult. I’ve had issues with my left shoulder, actually, just because of how gigantic those 29.5-inch guitars are.”

“I feel like for most modern metal stuff that’s tuned low, 27 really is the sweet spot. It’s not too unfamiliar from 25.5. But I don’t think 26.5 is long enough for what I use it for – for me it’s a bit of a half measure. 27 is where baritone starts. If you’re tuning below about B, it’s probably the right thing for you. But like I said – everyone’s different. There’s artists that tune super low on 25.5-inch scale guitars, but for us, with this it gets us, this big, thick sledgehammer-type sound. And I also really like to hear perfect intonation, and big sustain.”

The intonation point in particular, Josh says, is the reason for the presence of the Evertune bridge on his signature. If you’re not familiar, the thing itself is an incredible piece of technology: set up right, they can keep a guitar in tune for months. “When we had some intonation issues when recording, it wasn’t just shorter scale guitars. It was literally anything that didn’t have an Evertune on it. I wasn’t always fully onboard with the Evertune – I had one a really long time ago, but there was an issue with the guitar. I think the bridge might have been installed crooked, so I went off them for a bit.

“But when we did our fourth record, Mesmer, I just remember having so much difficulty in the studio with intonation on that, that we decided we would just move to Evertune. Once we started playing Evertune guitars live and in the studio, we couldn’t go back. It just makes life a lot easier.”

As well as being passionate about the benefits of an Evertune, Josh has clearly considered every part of his signature’s construction holistically. “There are three things that really don’t get talked about a lot, and I think matter when it comes to sound,” he tells us. “One of them is neck construction and how it impacts sustain. When you’re tuning really low, and you have an Evertune, it’s very revealing for a guitar that doesn’t sustain well. In my experience, neck-throughs are a lot better for low tunings in terms of sustain. You also get things like better upper fret access, which is undeniable. It also just looks sick.

“The other thing – and a lot of people get upset about this and tell me I’m wrong – is that the neck construction matters in a lot of ways that most people don’t realise. For me, by far, the best construction for a neck is a one-piece quarter-sawn maple. That’s as good as it gets.

“When you glue pieces of wood together to make a neck out of it, all the pieces of wood vibrate at different frequencies. Those frequencies will cancel each other out. And that can kind of create certain tonal aspects of the guitar. Like if you have a neck with a big piece of wenge in it and the rest is maple it’ll sound kind of snappy, but usually it doesn’t sustain as well.”

Josh then adds, laughing cautiously: “The third thing is the thickness of paint… but I won’t go into that, because I was roasted on the internet for talking about it.” We don’t press him on that to avoid a repeat…

It’s unsurprising, really, that Josh is so keen on one-piece necks, given the dramatic structural failure he experienced with a multi-laminate one. And the prototype’s already passed some severe temperature testing, albeit on the other end of the thermometer to a Canadian blizzard. “We use a lot of pyrotechnics when we tour in Australia – when you’re playing guitar in front of pyro, you know, I’ve seen other bands do it and you can literally hear their guitar detune while the pyro goes off. So the prototype was going through all that, and getting flown around Australia – and it didn’t move at all.” For one final word on the matter, Josh adds: “Oh, and the thing about one-piece necks twisting is really a crock of shit. If they’re made properly, it’s not an issue.”