“Guitar was a safe place for me”: emo-rapper nothing,nowhere. on straddling genres, viral fame and an old Martin acoustic

The rapper and songwriter on how he incorporates guitar into his genre-crossing music, and how the former SoundCloud sensation holds fast to guitar because it “was there for me when I felt like nothing else was”. 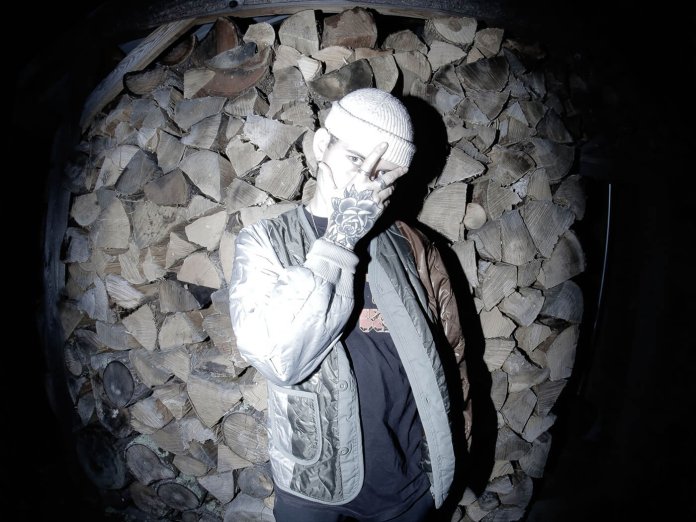 nothing,nowhere. spent years of his childhood searching for solace in the quiet suburbs of Foxborough, Massachusetts, where he was born and raised. He found it in a hand-me-down Martin acoustic guitar.

“It was a safe place for me,” he tells Guitar.com, speaking over Zoom from his beautifully-lit home in Burlington, Vermont. “When I was in the basement playing my cousin’s old guitar as a kid, I would pluck at it for hours and pretend I knew what I was doing. I wasn’t anxious, I wasn’t overthinking; it was a way for me to escape from all the thoughts in my head.” He pauses, before offering the rest of his answer with a warm, gentle smile. “I remember that one acoustic guitar was there for me when I felt like nothing else was.”

Born Joseph Edward Mulherin, the alternative singer-songwriter and rapper has long held a special place in his heart for the six-string. His addictive brand of guitar-based emo rap has seen him transcend from soul-baring SoundCloud icon to chart-baiting star with his three previous records as nothing,nowhere. – (Mulherin has also intermittently worked under several other monikers, notably: Never Forever, TRAU CHOI, and Lil Tofu) – a 2015 self-titled effort, 2017’s ‘Reaper’, and its follow-up ‘Ruiner’ have racked up over 200 million streams combined. The latter was released in 2018, the same year that he signed to DCD2 Records, which just so happens to be co-owned by Fall Out Boy’s lead vocalist Patrick Stump and bassist Pete Wentz.

But for Mulherin, this seemingly swift ascent to viral fame has been bumpy at best. A lifelong battle with severe social anxiety and its associated health problems has previously forced him to cancel huge tours at the eleventh-hour due to stage fright, suffer from debilitating panic attacks while on the road, and take extended breaks from social media. Though Mulherin has been open in the past about his mental health issues, and on the unflinchingly honest new album Trauma Factory – the title being “a synonym for human life” – he pulls the curtain back even further.

Written, recorded, and produced by Mulherin over two years – the longest he has even spent on a project – the record draws its surging pain from his own life experiences, and contains emotionally-probing ruminations on betrayal (Nightmare), relationship breakdowns (Pretend), and isolation (Death). Trauma Factory is a restless and essential listen that fights against industry moulds, and one that Mulherin truly seemed destined to create.

Growing up an ardent rock and post-hardcore fan on the East Coast, Mulherin spent much of his early teenage years navigating the pressures of his panic disorder. But at the age of 12, the spark was lit when he heard his older cousin’s guitar instructor cover Ozzy Osbourne’s debut solo hit Crazy Train. “It was like magic!,” he exclaims of hearing the music of the Prince Of Darkness for the first time. “I had never seen anyone create a sound like that, and I’ll never forget it.” 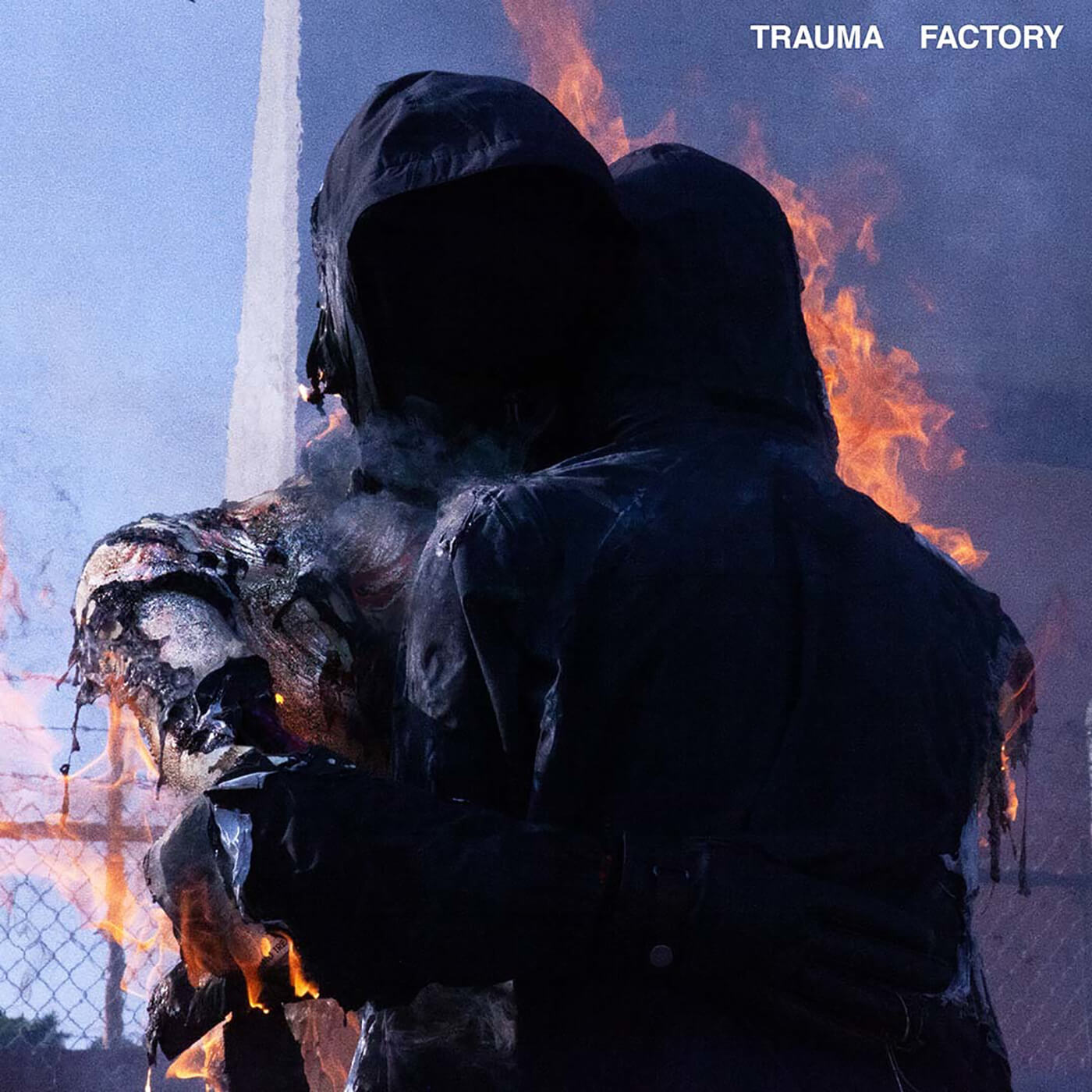 Left utterly transfixed by this formative experience, the next day, Mulherin sought out a “really old and super beat up” Martin Acoustic – and soon found that the guitar proved the best way to exorcise his demons: “I was so anxious and unsure of myself, but playing guitar was the coolest thing,” he says. “It was more than just a hobby – I was so stoked to have a guitar at all. I was putting my negative emotions into something positive, and it was really spiritual for me to come home from school and start screaming into the void while learning how to sing.”

Mulherin gleefully describes how he was an organised kid; he built an after-school routine of band rehearsals, guitar lessons “every other day”, and going to the community skatepark with like-minded friends who were also learning the instrument, where they would jam out and trade tabs from back copies of Ultimate Guitar. As his circles expanded, fellow guitarists turned Mulherin on to seminal emo bands American Football, Taking Back Sunday, and Circa Survive, and helped him to excavate his anxiety to the point where he was confident enough to record demos at their houses, albeit with the lights off. He was rehearsing for the moment where he would become a guitar hero himself.

“I think I will always be a product of the music that raised me, no matter how hard I try to escape it. At first, I was too scared to sing in front of people, so I was poorly parodying artists that I loved at the time,” he admits, reflecting on his first-ever recording sessions, throughout which he would use his cousin’s Telecaster (today, he owns 10 of Fender’s finest) before he bought his own electric model. And what happened? “I ended up getting a random Yamaha electric, and that opened up a lot of different avenues for me. The first time I got to play with distortion I felt like I was super powerful and cool!”.

This process allowed Mulherin to build a network of close collaborators as he went on to emerge as a hungry and determined guitarist from the SoundCloud emo rap movement of the mid-2010s, and then remain at the forefront of the scene from its infancy upwards. “I think SoundCloud was like the virtual version of the same group of kids I grew up with at the skatepark. We would be trading guitar tabs virtually,” he grins. And from there, such collectiveness started to seep into the music itself.

It was on the “unfiltered and raw” music sharing platform that he began to upload his hip hop-flecked demos, and abandoned the acoustic instrumentation of his youth for a combination of brittle rap beat overlays, epic flows, scattershot rhyme schemes, and electric chords – a mix that he now cites as his “winning formula”. Indeed. Breakthrough 2018 single Hammer, recalled how sans a publishing deal, Mulherin gradually infiltrated the mainstream with an uncompromising approach to the genre that he helped to pioneer with only the help of his peers. “I did it all on my own, no promo, I got fans gettin’ tats of my logo”, he spat over some heavy reverb. “Play the guitar like a young Santana”, boasted the chorus.

On Trauma Factory, Mulherin’s “favourite album yet”, the status quo maintains: for this record, the 20-something worked solely with his closest friends. He’s quick to credit them for helping him to transform his previously shy flirtations with elements of nu-metal, pop-punk, hardcore, and R&B into fully realised, genre-blurring hits. Hard-nosed KennyHoopla and JUDGE team-up Blood reveals the scale and intensity of this hugely collaborative creative method with its explosion-like liftoff on the chorus; Pain Place featuring MISOGI plays with bleeding 808 beats. Even though Mulherin has always self-defined himself as a “genre-less” artist, it is on his fourth album where this appellation finally begins to translate.

“If I keep making the same type of music, I am never really progressing,” he explains. “I am subscribed to the belief that to truly grow and continue on a healthy musical journey, you really need to push yourself outside of your comfort zone – and I wanted to go all the way with Trauma Factory.”

Mulherin’s music has always been resolutely human, but he seems to have an astute awareness of the power of being so unfiltered and open with his fans. The support he has received over the years (nothing,nowhere. tattoos, art projects and shrines are out there in abundance) is something he wants to return through his new music – this is an artist that is set on alchemising his everyday struggles into universal anthems of hope, despair, heartbreak and confusion. Mulherin is a self-made star who speaks directly to those trying to navigate the weight of living, and Trauma Factory is the record that sees him finally confident in his musical identity, mixing a wealth of styles assuredly with his most vulnerable lyrics yet.

“I hope this album inspires other people to be honest with themselves and with others, and to not hold their emotions in,” he says, with a Zen-like calm. “That’s what I learned from the music that I grew up listening to, and to be able to do that for some other kid is a blessing. It already feels like a success because I told my story, and I put it on an album.”

Trauma Factory is a hard-won triumph that refuses to be boxed into any genre category, but ultimately, the record’s roots can still easily be traced. Mulherin adds: “Guitar is something that is so intrinsically built into my soul that I can’t ever avoid it. No matter how hard I try, I will always come back to the guitar because it is where I feel the most comfortable.” His eyes suddenly widen, as if he is experiencing an epiphany in real-time. “It will always make me feel like a kid.”

Trauma Factory is out now on DCD2/Fueled By Ramen.