“I hated my tone, it was awful”: Orianthi on pedals, Gibsons and why she cringes at her old videos

The Australian guitarist on her Gibson signature model, Flying Vs, fuzz and why she didn’t sweat the small stuff on new album, O. 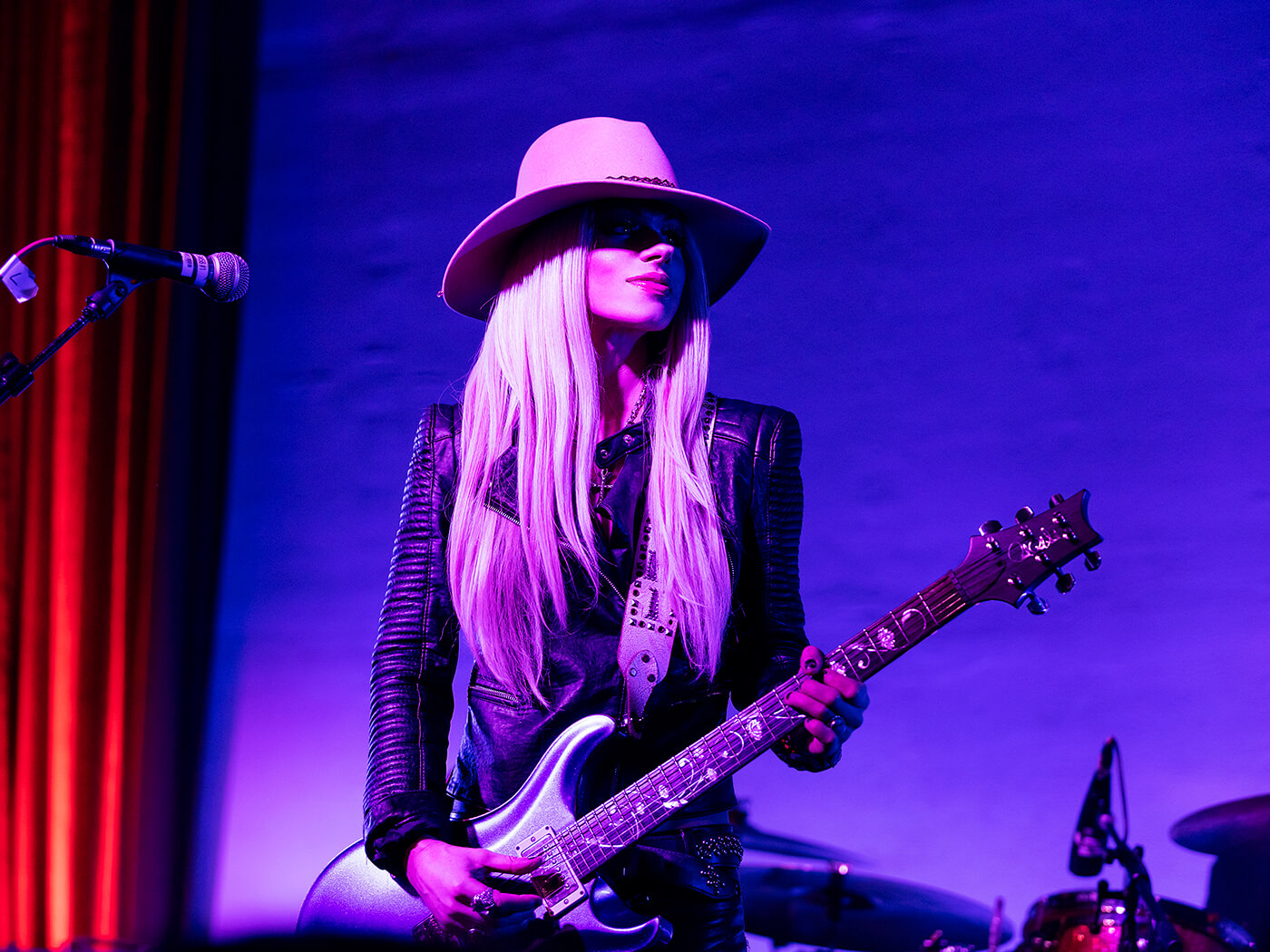 It’s been over a decade since the news broke that the then-24-year-old Aussie guitarist Orianthi Panagaris would step into Jennifer Batten’s shoes as the guitarist on Michael Jackson’s fourth ever world tour. Jackson’s death in 2010 meant that she never got to actually take the stage with the King Of Pop, but in the 11 years since, Orianthi has established herself as one of the biggest names in instrumental guitar, played with everyone from Michael Bolton to Alice Cooper, released an album with Richie Sambora and released a string of well received solo albums.

In 2020 she released, O, her first solo album in seven years and her most ambitious yet. We caught up with the now 35-year-old at her LA home to discuss the album, her forthcoming Gibson signature model and fuzz pedals.

O is the first album under your name since Heaven in this Hell (2013) how did you approach the creation of this record?

“You know I did this album with Marti Frederiksen in 28 days, it was really fun, not having to over-think things – it was more a case of these were the songs I wanted to write for the record I wanted to make. I wasn’t interested in honing each and every tiny detail to perfection. It’s all about the vibe – capturing different sounds to make you feel something! I love going to Nashville to make records and I love working with Marty, he’s amazing!

“People do sometimes wonder, ‘What have you done for seven years?’ But you know I was actually very busy, I did the RSO record [with Ritchie Sambora], I’ve done a lot of writing and collaborations, working on an animated film, I was involved in a hip-hop project all sorts of things that people might not expect!

“I’m really happy to be able to finally get this music out there. I hope people enjoy the record, the support of the fans has been amazing and I’m very appreciative.”

“Contagious was a lot of fun. I decided to call it that before the pandemic mind you! I wanted to make a really heavy song and I was listening to a lot of NIN, Marilyn Manson, I went through a phase listening to all this different heavy stuff.

“I was listening to a lot of Sabbath and that was also because I was being asked to cover a lot of Sabbath! I did a Halloween show, I played with Ozzy and then I was part of the Royal Machines with Dave Navarro and Billy Morrison and I’d play War Pigs with them so yeah, a lot of heavy stuff and a lot of Sabbath. That one’s going to be a lot of fun to play live, I’m really looking forward to that!

“Sinners Hymn, was a riff I’d had for a little while that I just kept playing around with. I’d been working with Nexi Industries who designed a signature octave fuzz for me and it all came together when I used that pedal. I had the song half-done for a while, but it didn’t have the chorus – then one day it happened and I finished the whole thing in about ten minutes!

“A lot of people have mentioned Nirvana or Hendrix as an inspiration behind the song but we weren’t deliberately going for anything like that. For me it’s the story of a bluesman ripping up the town, drinking, cheating with loads of women, waking up and doing it all again, just living with a hellhound on his trail. You know I’m heavily influenced by the blues and that’s a classic story, a Robert Johnson kind of thing!”

“Some of the sounds on the album were re-amped and I used a Kemper for a couple of tracks too but really most of it was just straight into an Orange Rockerverb Mk 3 and we messed about with reverbs and delays later. I love that amp, Orange me made a beautiful custom model covered in gold snakeskin, as you do…”

How has your approach to effects evolved over the years?

“These days when I’m playing live I go into a wah and then straight into the amp. I don’t like too many pedals, it irritates me. I think it destroys the connection you have sometimes and believe me I’ve gone through pedal phases as much as anyone! I’ve had rack mounts, floor mounts, wireless packs, so many different systems.

“There are a lot of views on my version of Voodoo Child on YouTube and I can’t really watch it, I just cringe. I hated my tone, it was just fucking awful, but I had a great time with an EVH amp cranked up and all these effects. There are a lot of mean comments like, ‘Her sound sucks’ and I just think yeah, I agree with you guys, it sounds pretty shitty, but it was a fun time!”

You are well known for your use of PRS guitars on stage, but you’ve also been working with Gibson on a signature model?

“It’s good to change things up and experiment, and I have used so many different guitars over the years, I love Teles and Strats too, but I’ve been with PRS since I was 14 years old and I’ve had two sold-out signature models with them. Paul Reed Smith is like family to me, I love the guy.

“When it comes to Gibson, I have this beautiful Les Paul that I bought in Ireland, and recently I’ve been using a white Flying V which is just gorgeous. I love the guys at Gibson and yes, I’ve also been working with them on a signature J-200 hybrid acoustic which is so exciting.

“I’ve always been a fan of SJ-200’s but they have those boat-like necks on them and so I asked the team at Gibson if it would be possible to put a neck from a 345 on it and they said yes! From that point of view I guess it’s an electric acoustic hybrid design and it’s really playable.

“I went through to Montana to pick up the prototype and it’s just incredible, it’s easily the best acoustic guitar I have ever played and a piece of art at the same time. It’s coming out early next year and I am really looking forward to the launch, we’ve worked so hard on it!”

O is out now on Frontiers Music.