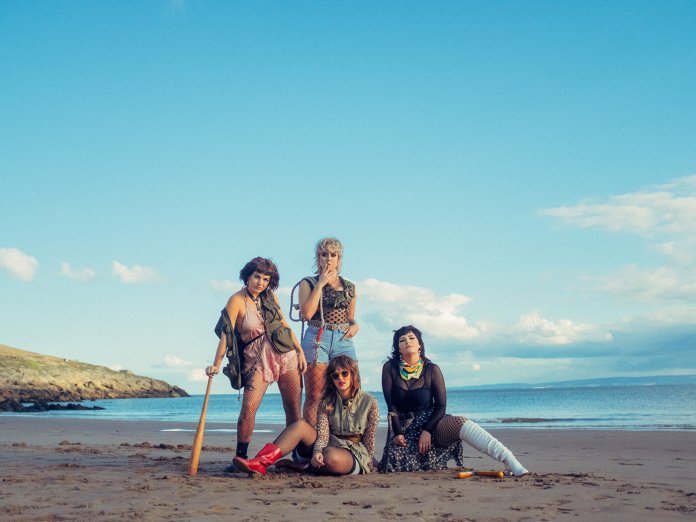 “We’re actually pretty new to guitar playing. Emily has played bass in another band for a few years so she’s our ‘real’ musician. As for myself and Meg, we are really new to it. We’ve basically been teaching ourselves to play ever since we decided we were going to properly form this band – so a little over a year. I guess it just came down to being fed up of complaining that there aren’t enough female guitarists and putting our money where our mouth is. Meg said it was School of Rock for her.”

“I play a Squier Tele through a distortion pedal and Blues Driver, and Dave’s [drummer] old guitar amp. Meg uses a Squier Strat, distortion pedal, chorus pedal and again, you’ve guessed it, a borrowed amp. Emily plays a Fender Precision (borrowed from her dad, because her Squier wasn’t quite cutting the mustard), a fuzz pedal, and whatever amp she can get someone to lend her. This set up is, of course, all temporary until we get our Fender endorsement!”

You say you formed the band to counter the growing feeling of music becoming even more elitist and closed off to working-class people – how do you hope to inspire that change?

“Just pushing as hard as we can to exist in this sphere, we hope, will inspire more girls especially those from working-class backgrounds, to have a crack at it. When we were younger all you saw were men in guitar bands, so it didn’t cross our minds that it could be something, we, as girls, could ever do. If us being a band that other girls can look to and be inspired to pick up an instrument by or write a song, then our job is done. Also in terms of guitar playing it can be super intimidating to put yourself out there when you don’t necessarily feel like a ‘guitarist’ especially when you’re backstage with a load of guys who are amazing guitar players – what we’ve learned over the past year is that music is just about conveying a message and making sound. Music is subjective and you don’t need to be shredding solos until your fingers bleed to write an amazing song – look at The Slits!”

“Our approach to playing guitar is interesting because we can’t really play! Jokes aside, I think as a band we’re pretty unusual, because we don’t have all that much technical knowledge, we basically chuck a few notes together that sound good and go from there. In regard to what we sound like, because the songs are quite bass heavy, we’ve been compared to bands like ESG and Delta 5 which we’re completely fine with. We’re big fans of both.” 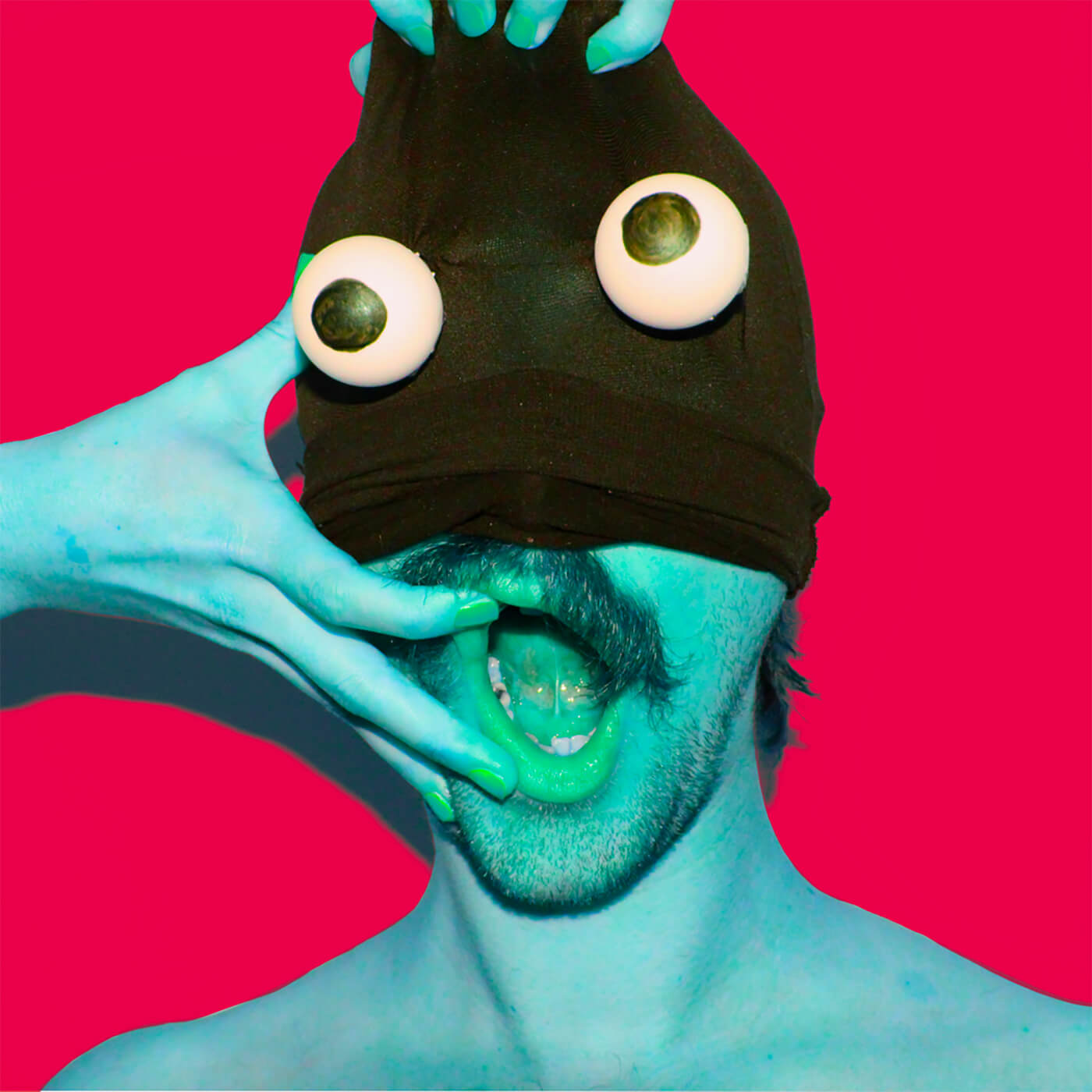 What’s your most memorable gig so far and when can we see you play next?

“For all of us our most memorable gig was our headline show we performed just before lockdown. It was amazing to sell out downstairs in [Cardiff venue] Clwb Ifor Bach and see people arrive wearing our T-shirts and shouting our lyrics back to us. It felt like all our hard work over the previous year had come to fruition.”

I Don’t Really Like It represents a slight departure for you in terms of sound compared to your previous singles, what inspired that?

“After the release of our first single we were quickly labelled as a punk band, but in reality, all of our songs have a very different vibe. In terms of relaying messages, we stay pretty consistent but musically our songs are very diverse, as you’ll keep discovering.”

The single is already generating significant airplay, how does that impact a band on the up like yourselves?

“We’ve had the belief in ourselves from the beginning that we could accomplish a lot as a band and that’s what we credit our success to. Even though we’re incredibly grateful for the response we’ve had so far, nothing has really changed for us because we knew we could achieve what we have. Our heads still fit through the door though if that’s what you’re wondering!”

“We went to Tom in the early days and asked for a bit of advice about the music biz, as we’d seen Buzzard go from strength to strength over the years and wanted nothing less for us. When it came around to us wanting to record it was a no-brainer that we’d record them with Tom! We were, and still are, quite new to recording and everything that goes with it, but we were never made to feel anything but comfortable in the studio. We recorded 10 songs in five days just before lockdown struck; there was no stress, lots of laughs and we felt completely at ease, which is very much our vibe.” 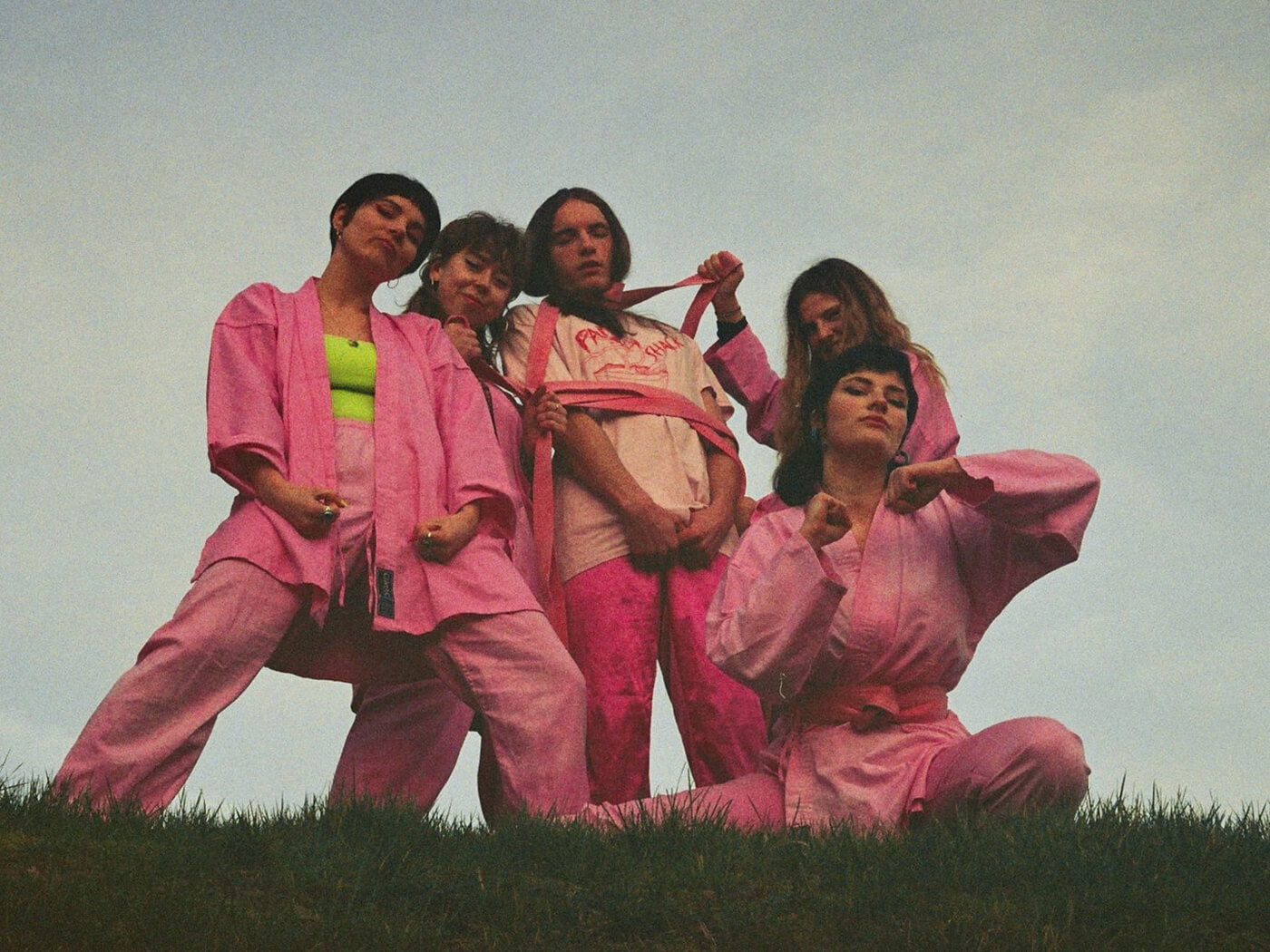 With three singles already in the bag, is there a record on the horizon? If so, can you tell us more about it?

“All we can say is you ain’t seen the last of us and that BIG things are coming. Our lips are sealed.”

“After countless world tours we probably would’ve settled into our Hollywood mansions. Panic Shack remain at the top of every chart worldwide and we eat caviar for every meal. Meg is running for president, Sarah and Harry Styles are expecting their third child, Emily resides in her cat sanctuary, I’m back in rehab and Dave’s playing in a Beatles cover band. We haven’t really given it much thought to be honest.”

“As well as writing music together, we’re all part of Cardiff’s first mixed sex synchronised swimming team. Crazy but true!”

Panic Shack’s latest single, I Don’t Really Like It, is out now.