With their War Music, Refused are fanning the flames of punk to come

20 years after their now-legendary breakup would become a cultural touchstone for almost every punk and hardcore band of the 2000s, the Swedish iconoclasts have rediscovered their anger for their fifth long-player. 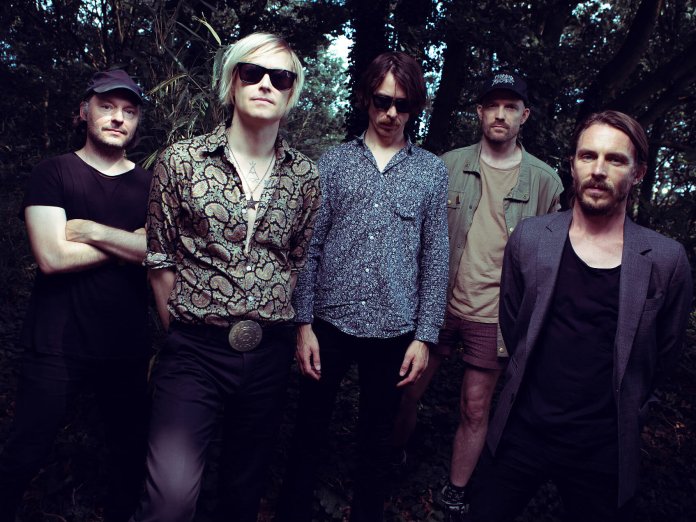 Refused have never been afraid to make bold statements about their music. Their first two records were called This Just Might Be…The Truth and Songs To Fan The Flames Of Discontent. Their third was dubbed The Shape Of Punk To Come; a gauntlet thrown down to their peers that became an unfulfilled prophecy.

Their new one is called War Music and it wears the title well. It’s the legendary Swedish hardcore band’s second LP since their shock reformation in 2012, and it stands as a furious polemic from vocalist Dennis Lyxzén, delivered over Kristofer Steen and Mattias Bärjed’s roiling guitars. “It was definitely on my mind to do something aggressive and abrasive,” Steen says, noting that the riffs were in place long before the bullish words or title were a reality.

The one thing that most music fans know about Refused is that, well, they fucking died. In 1998, soon after releasing The Shape Of Punk To Come, they fractured among police sirens at a poorly attended basement show in an American town that few care about enough to remember.

The future they pointed to – expansive, complicated, socially conscious and righteously heavy – wouldn’t be theirs to share in. “We will never play together again and we will never try to glorify or celebrate what was,” the band spat in a final confrontational communiqué.

And then, perhaps inevitably given the vehemence of their exit from the world stage, the unthinkable happened. 14 years later, Refused were reborn. They made a high-profile comeback at sun-dappled Coachella and then suited up for some headline shows. They even did a festival season like a bunch of normal people. In 2015, to compound things, they went one further and did what was expected of them by releasing a new record.

Want the airwaves back

But, surprise! Nothing is ever that simple in their world. So, instead of reinventing punk for a second time, Refused put out the wide-reaching, polished Freedom – complete with horn flourishes. Column inches were readily given over to the fact that Shellback, Swedish hardcore nerd turned pop wunderkind and collaborator to the stars, was among the producers.

War Music is nothing like Freedom. In fact, it sort of hates Freedom. “We really threw out the baby with the bathwater on that record,” Steen says. “And, of course, we were totally unaware that we did it at the time. It was too polished and it was too mature, you know? It was too introspective in every way. But I’m very proud of Freedom – we took it as far as we could.”

Warming to the task, he adds: “I think the reunion year, we were kind of seduced by playing all these pop festivals and all that stuff. We became confused as to what kind of band we were. It almost felt like we were an alternative-rock band. It messed with our heads.”

War Music wastes no time in pressing reset. Its monstrous first riff emerges from behind a sample, cleaving through the speakers just as the Songs To Fan The Flames… opener Rather Be Dead did way back in 1996. Amid the chaos, Lyxzén finds pockets of space and undulating grooves, dispensing throat-stripping screams and Mick Jagger-via-Minor Threat charisma.

On the thunderous lead single Blood Red he preaches collectivism and rails at the One Percent as Steen and Bärjed’s leads spar with one another in its cacophonous chorus. “If I fall, you’ll help me up,” he roars. “If you feel weak, we’re stronger now.” This is Refused pushing back as they always have done, only their own recent music is also under attack.

“I think this time around, we felt like it was okay to be self-referential, to use things that are Refused,” Steen says. “As compared to Freedom, where we just totally would not have used something that would remind people of the band. Now we’re like, ‘Wow, this sounds like a Refused thing,’ and we just do it for fun, because it’s, you know, self-plagiarism.”

The band split recording between several spaces. After capturing the drum tracks at a studio on Gotland, a small island in the Baltic Sea a little over 50 miles from the mainland, they reconvened at Cobra in Stockholm with producer Martin Ehrencrona. A veteran of records with retro-metallers Tribulation and post-punks Viagra Boys, he was tasked with helping to create War Music’s palette: crushing riffage paired with the classic sleazy grime of Swedish punk ’n’ roll.

“A big thing about this record was finding a good guitar tone,” Steen says. “It was really difficult finding the proper tone and that’s also as a reaction to the Freedom record – I just wanted a bigger guitar presence: thick, warm, energetic, exciting. But the problem is that we exist between genres. We’re not only a punk band. We’re not a metal band and we’re not a pop band. If we choose a very specific sound, it’s not going to work. It took a lot of time to find the right vibe.”

Fortunately, Steen had already begun the process of roughing up the edges of Freedom’s songs live, leading him towards its successor’s razor-wire heart. While touring the record, he began playing a Gibson ES-335, channelling the big semi’s strident, brawler character. In the studio, though, it didn’t make the cut. He mainly uses it at home, wrestling with its feedback on his own time.

“I was just kind of tired of this sort of obstacle course, it just doesn’t give anything back,” he laughs. Steen’s Les Paul Custom, perhaps the guitar most readily associated with his playing, also largely missed out. “For some reason, it doesn’t sound that great in the studio,” he says. “It’s really weird. It sounds really good live, but it just doesn’t really work. I can’t find the tone that I want.”

As it turned out, it was a case of the simpler the better across the board in order to make War Music tick, an equation that also goes against the traditional Refused grain. Steen believes in the studio as a tool for musicians, but on this occasion, he found himself reining in his impulses as they zeroed in on what worked for this specific set of songs. “I’m sort of a fan of overcomplicating things and trying everything,” he says. “But we really tried everything. We did a lot of complicated things and it didn’t work.

“Mostly I used a 60s SG with JB pickups, super simple,” he adds. “I used a Fender Twin and a Boss Turbo Distortion, not even a very good pedal, and the sound of everything made perfect sense. Mattias played a JCM800, a Les Paul and a Tube Screamer and that was the simplest possible setup. But it’s all about how you mic things and the ambience of the room. For some reason, it worked in that studio.”

The idea of Refused keeping things simple might be anathema to some fans, but to reframe your process like this requires a deep understanding of how your band functions. Even with its electronic flourishes and nods to the past, War Music is as close to a straight-ahead attack as we might ever get from Steen and company. Dispensing the album’s fraught shards of noise, he certainly seems to have tuned in to this iteration of Refused on a primal level.

“We were sort of communicating in two different languages: the Freedom language and the language of everything else that we’d done,” Steen observes. “And it was difficult to blend those two things together in a smooth way. You can tell what works and what doesn’t and I think this record is really us learning. Like, what are our strengths and sweet spots as a band? It’s focusing on them instead of trying to be something else.”

Refused are alive, and they’re spoiling for a fight.

War Music by Refused is out on 18 October through Spinefarm/Search & Destroy.