“The sound of my Gretsch just sits around Slash’s sound” Richard Fortus on Gretsches, GN’R and going head to head with Slash

The Guns N’ Roses guitarist on what makes his new signature Gretsch Falcons so perfect, getting on the volume knob, and the magic of Filter’Trons mixing with PAFs. 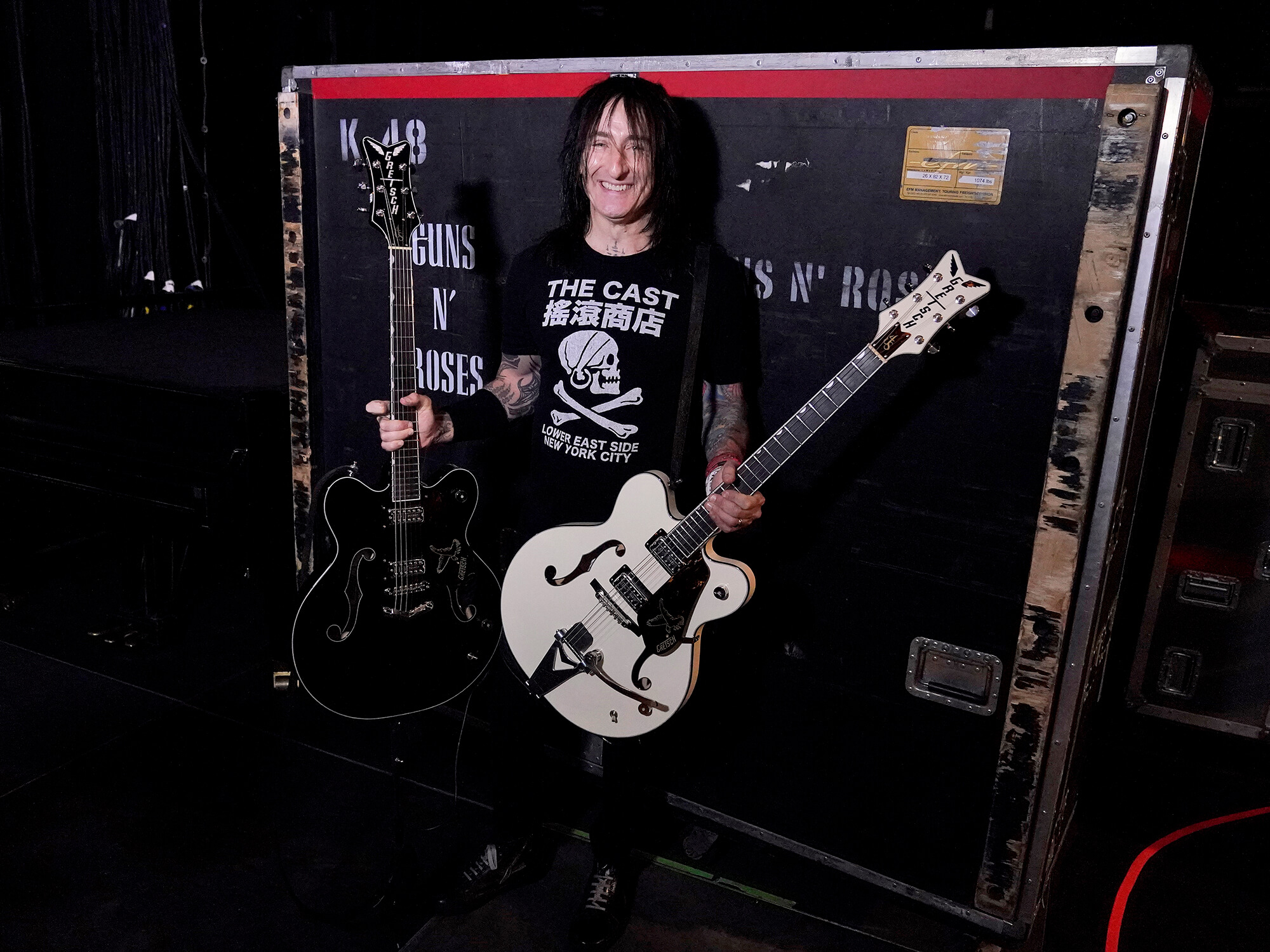 Richard Fortus might have been a member of Guns N’ Roses since 2002, but his career is built on a soulful style of playing that’s chameleonic and impossible to pin down. It’s why he’s taken the stage with everyone from Rihanna and Enrique Iglesias to The Psychedelicate Furs and Thin Lizzy while also holding down a chair in the world’s biggest hard rock band.

Fortus has also been a long-time appreciator of the unique charms of Gretsch guitars, and so it’s entirely fitting that he’s just welcomed a pair of new Gretsch signature model Center Block Falcons – the Bigsby-sporting G6636-RF, and the stoptail G6636-RF. We caught up with him to find out more about the new guitars, breaking thumbs on selector switches and the joys of a custom instrument. 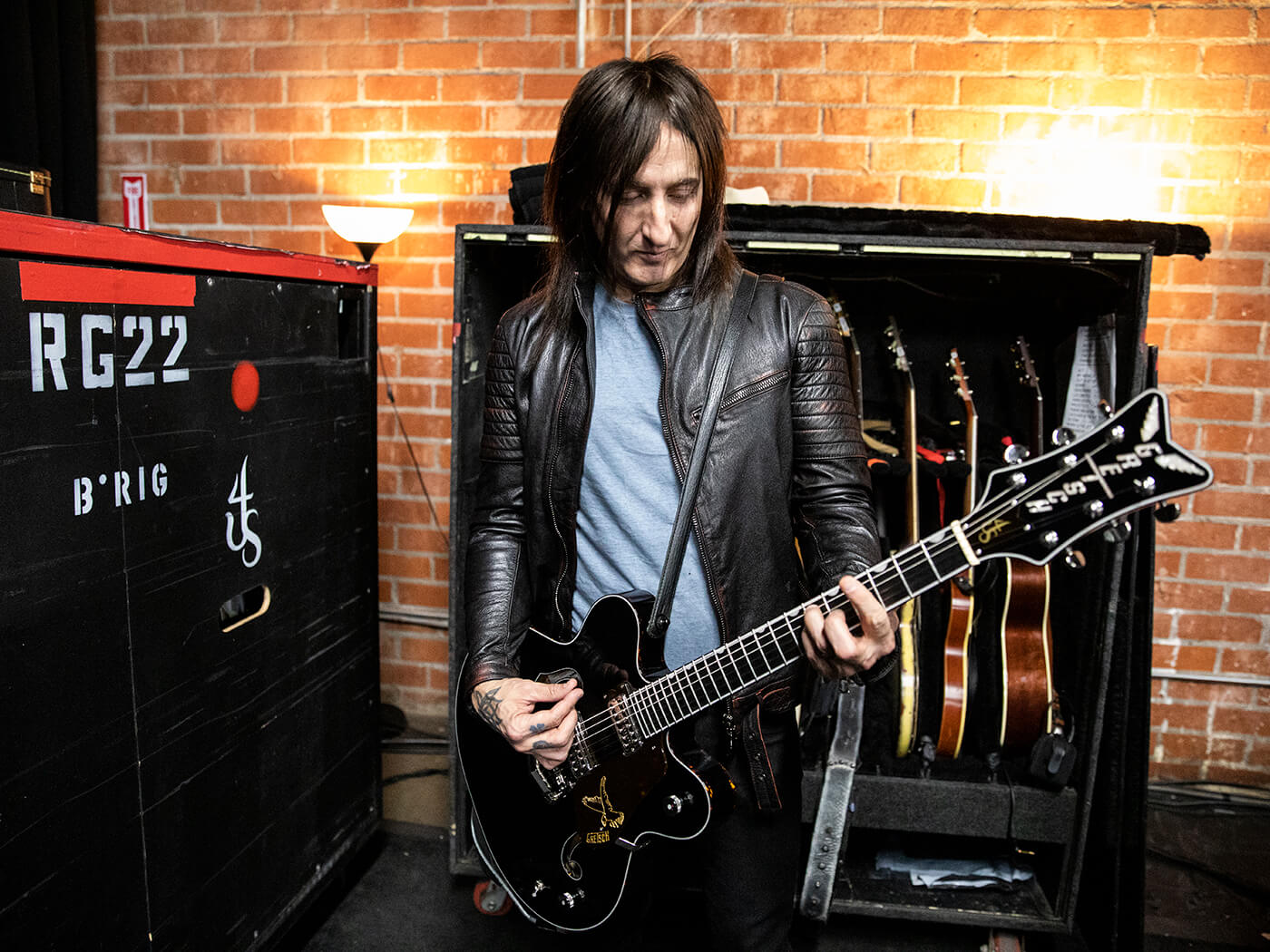 This is a big thing! You’ve been seen with Gretsch guitars pretty much your entire career – what does a signature Gretsch mean to you?

“It really is a big thing… It’s such an honour and I feel very privileged. I bought my first Gretsch from a guitarist named Bobby Caldwell – a phenomenal Jazz and country guitar player. It was a 1966 Tennessean with double HiLo‘Trons and I used that guitar with The Psychedelic Furs and with Love Spit Love. That’s where the relationship started.”

The Gretsch Falcons are totemic designs each of which means different things to different people.

“I always wanted a White Falcon because of Steve Marriott and Neil Young, Billy Duffy, you know. I always thought the White Falcon was just so awesome, Malcom Young played one, you know the list goes on, Sylvain Sylvain… actually, talking about the New York Dolls, have you seen that photo of Johnny Thunders playing a double-cut? That was a big influence on me!” 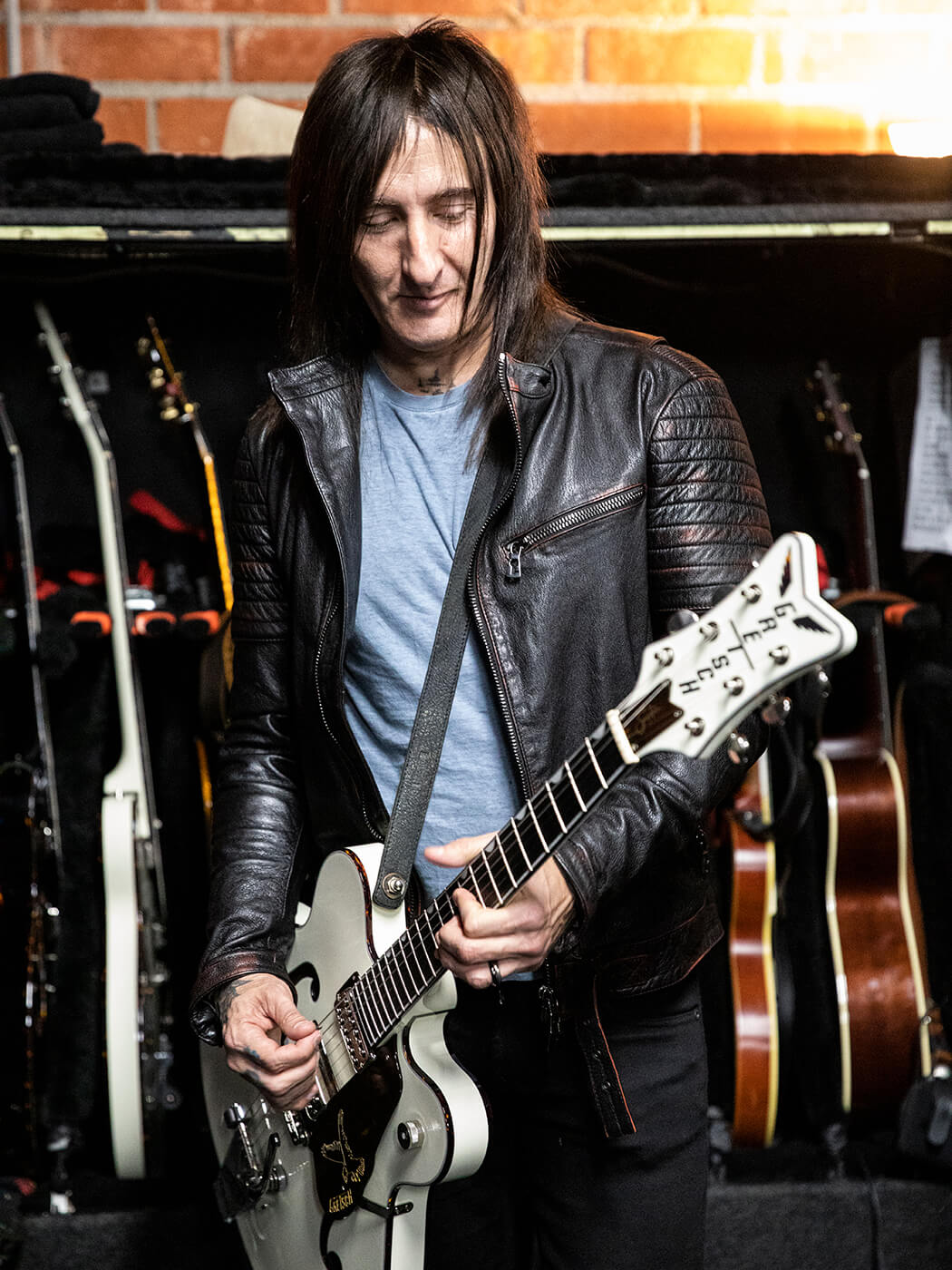 Yes indeed – you’ve gone for a double cut design for these guitars!

“I love the aesthetics of a single cut, but from a practical point of view I know I can play a double cut for a whole set and that was my goal – a guitar I can play all night. We worked hard to keep the weight down to the bare minimum, too – the centre block is spruce which is light and it’s also chambered.

This is every guitar geek’s dream come true…

“Ha! I don’t know if it’s everyone’s dream come true – but it’s mine! It’s the perfect guitar for me and I’ve owned a lot of guitars!” 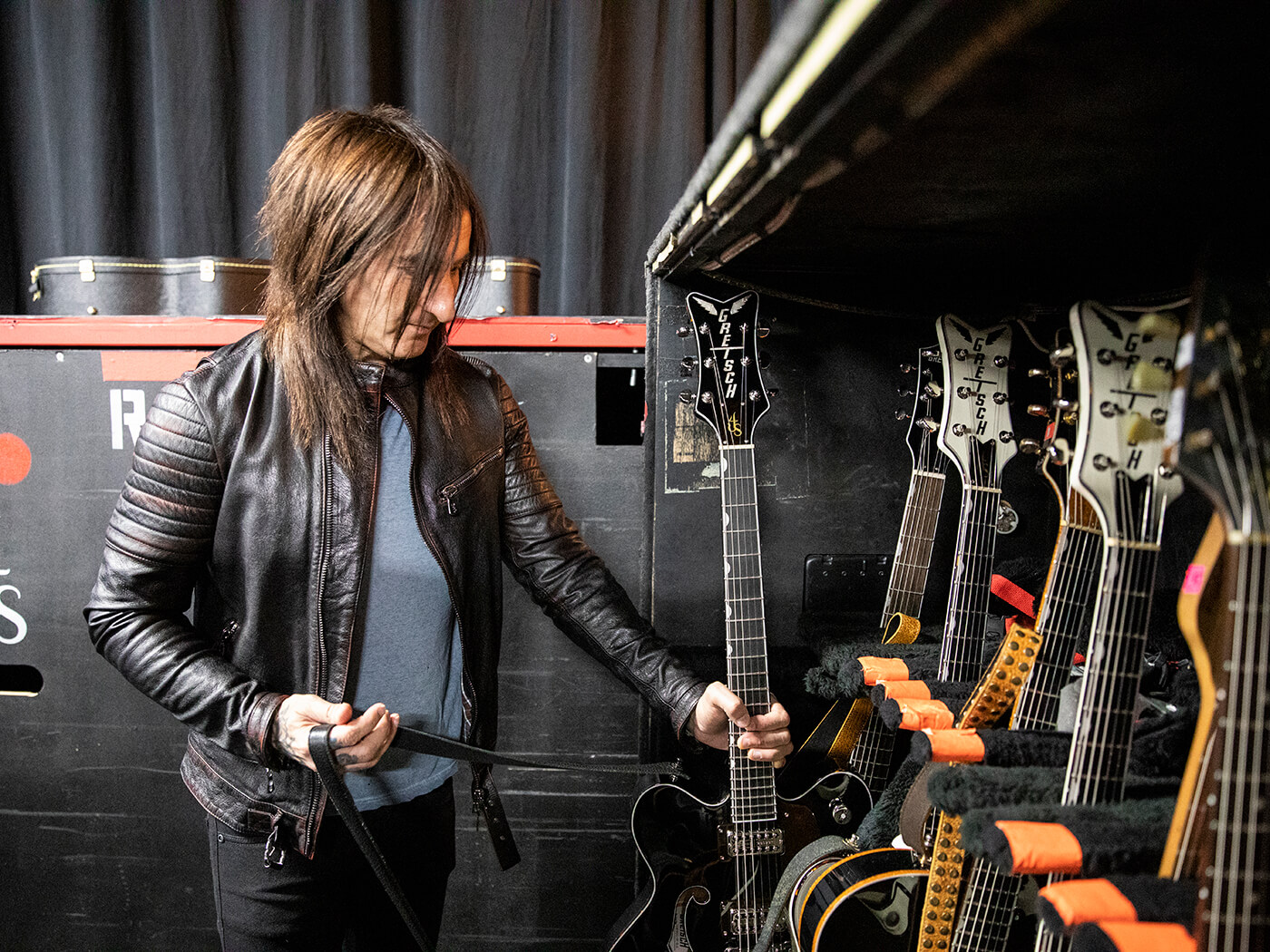 That’s a good point – Gretsch is an achingly cool brand making achingly cool guitars and that is a wonderful thing for people who really get them. But not everyone does…

“That’s exactly right! They are often under-appreciated, especially in rock and roll these days. They’re a mainstay for country, rockabilly, indie but for rock they are often overlooked which is just staggering because they’re such an obviously integral part of historic rock ’n’ roll tone!

“They’re not always practical. When I used my first Gretsch live I would play so hard I used to knock the bridge completely out of the guitar. It would fall on the floor and I’ve have to scramble around, pick it up and push it back in place under the strings – this was before I learned you could pin a bridge!” 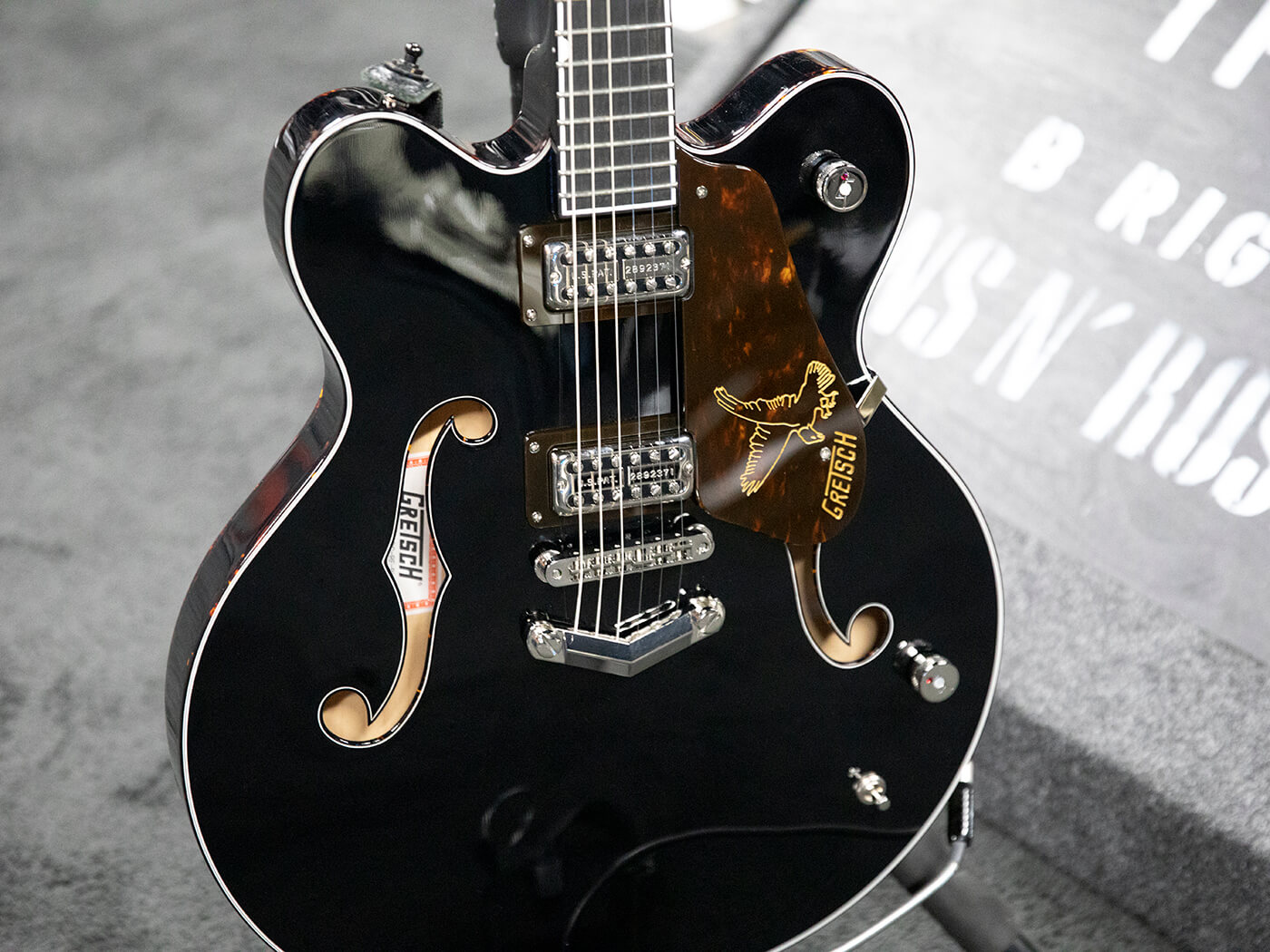 How was the sound you were looking for informed by your work with Slash?

“In my experience there is nothing like the interaction you get with two players when one has a Gretsch with Filter’Trons and the other has a Les Paul with PAFs – and when Slash came back to GN’R I started pulling out all my guitars to see what worked. I’ve always been a big P-90 fan – but there’s too much information in the mid frequencies. I tried everything and then I picked up my Gretsch and it was absolutely perfect.

“The sound of my Gretsch just sits around Slash’s sound – I back down on the gain, crank the master volume and that’s all I need, it just works!

You have been known for playing very cool boutique guitars – the sort of instrument that makes people go what the fuck was that? You obviously have an in-depth understanding of what goes into a custom instrument.

“It wasn’t until I discovered James Trussart and Leo Scala that I started working with modern luthiers. When you have a relationship like that then you can go into fabulous analytical detail with every aspect of the guitar. I used the same approach and Gretsch were just incredible to work with.” 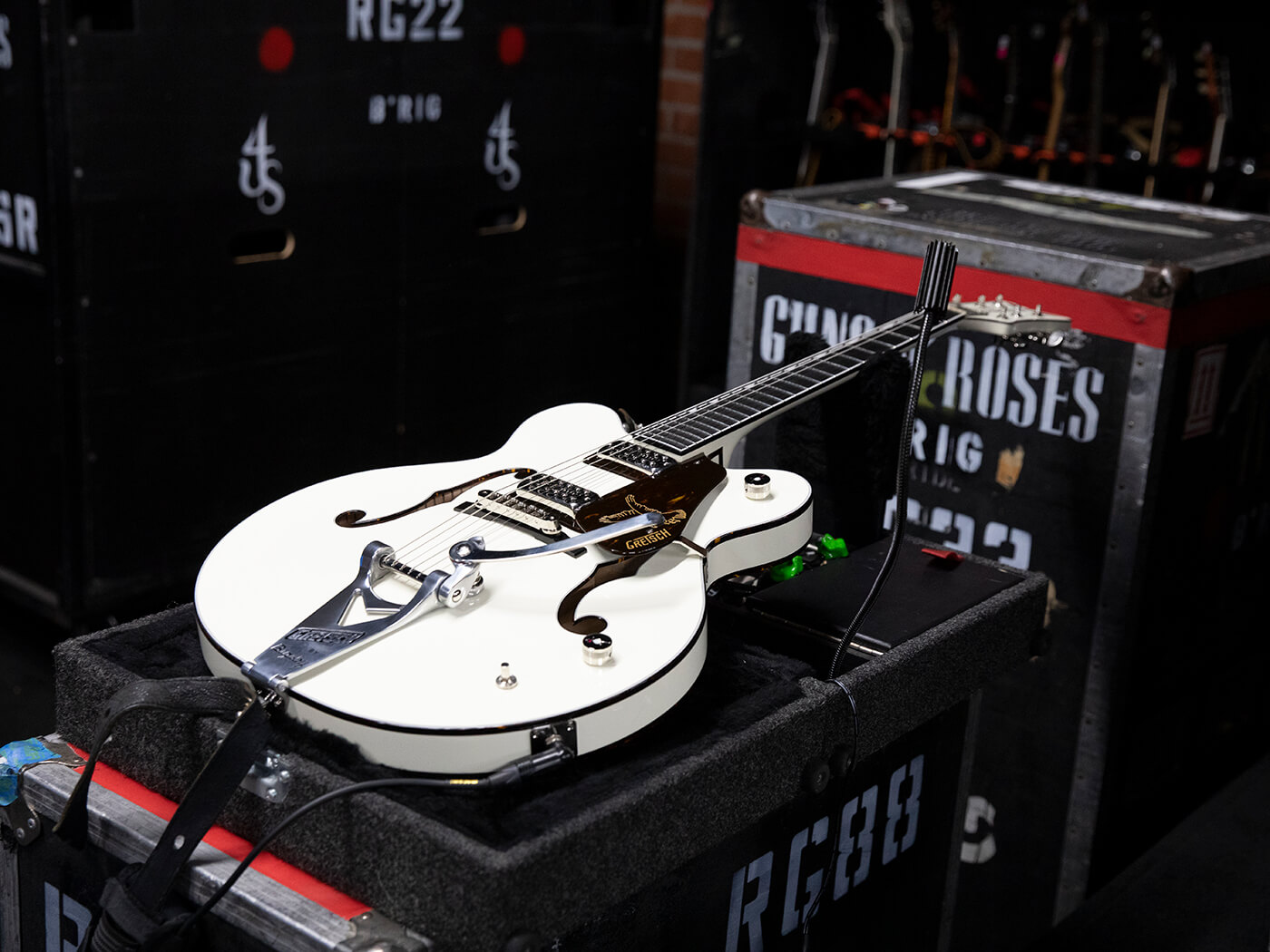 There are two models of your new signature model – a black hardtail and a white Bigsby version – each with a different scale length. What’s that about?

“That’s right! The black guitar is 24.6” which is closer to a Gibson scale length. I generally switch to that when I’m bending strings but I also love that shorter scale warmth and smoothness. It’s easier to bend on a stop-tail, short scale guitar and the more intricate lead approach works better.

“The white guitar is a 25.5” scale which is standard for the Falcon model. Having that extra scale length on a Bigsby equipped instrument is important for me. It makes a big difference to the responsiveness of the Bigsby itself and it gives the guitar a snappier tone.

“Of equal importance was that we use a B6 as opposed to a B7 Bigsby model. You do get a little bit of residual ring when you’re muting with heavier amps and I sometimes use a little bit of foam under the bottom three strings behind the bridge to keep things tight. But it’s worth it to not have that tension bar on the B7 because you lose a lot of responsiveness. There are subtleties to the B6 that I find crucial. It’s a drill-through Bigsby too which is important.” 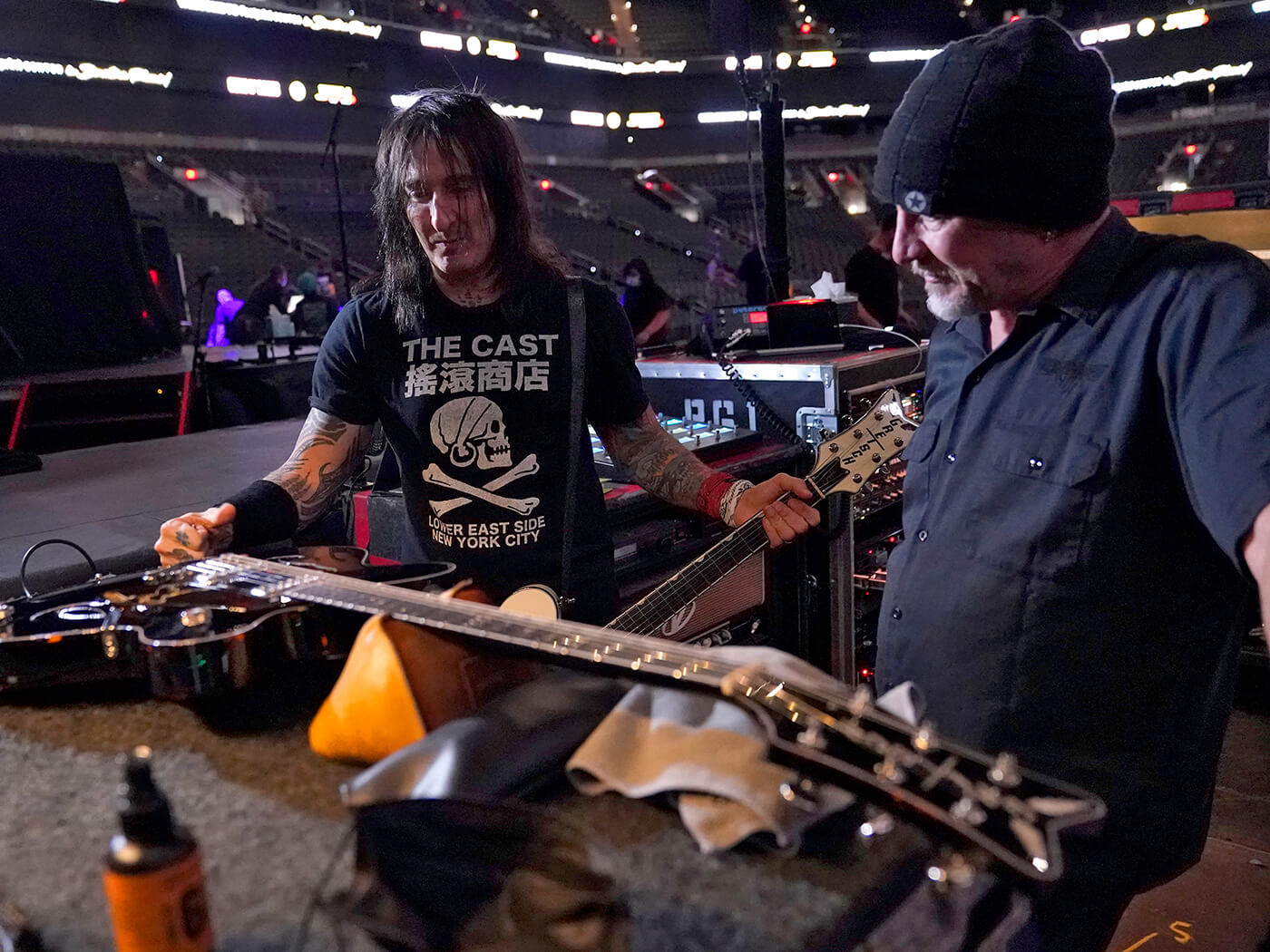 The controls are also stripped back by your standards – no piezo, no kill switch…

“The controls are stripped back and simplified – the volume is on the lower cutaway, I’ve always loved that about Gretsch. There’s a master tone down in the lower bout along with the selector switch. And that’s it!”

“You know I have broken my thumb on more than one occasion on selector switches so I like to keep it out of the way! I have actually fitted one with a kill switch – I had to have one for some of the GN’R songs – and I blame Buckethead for that!” 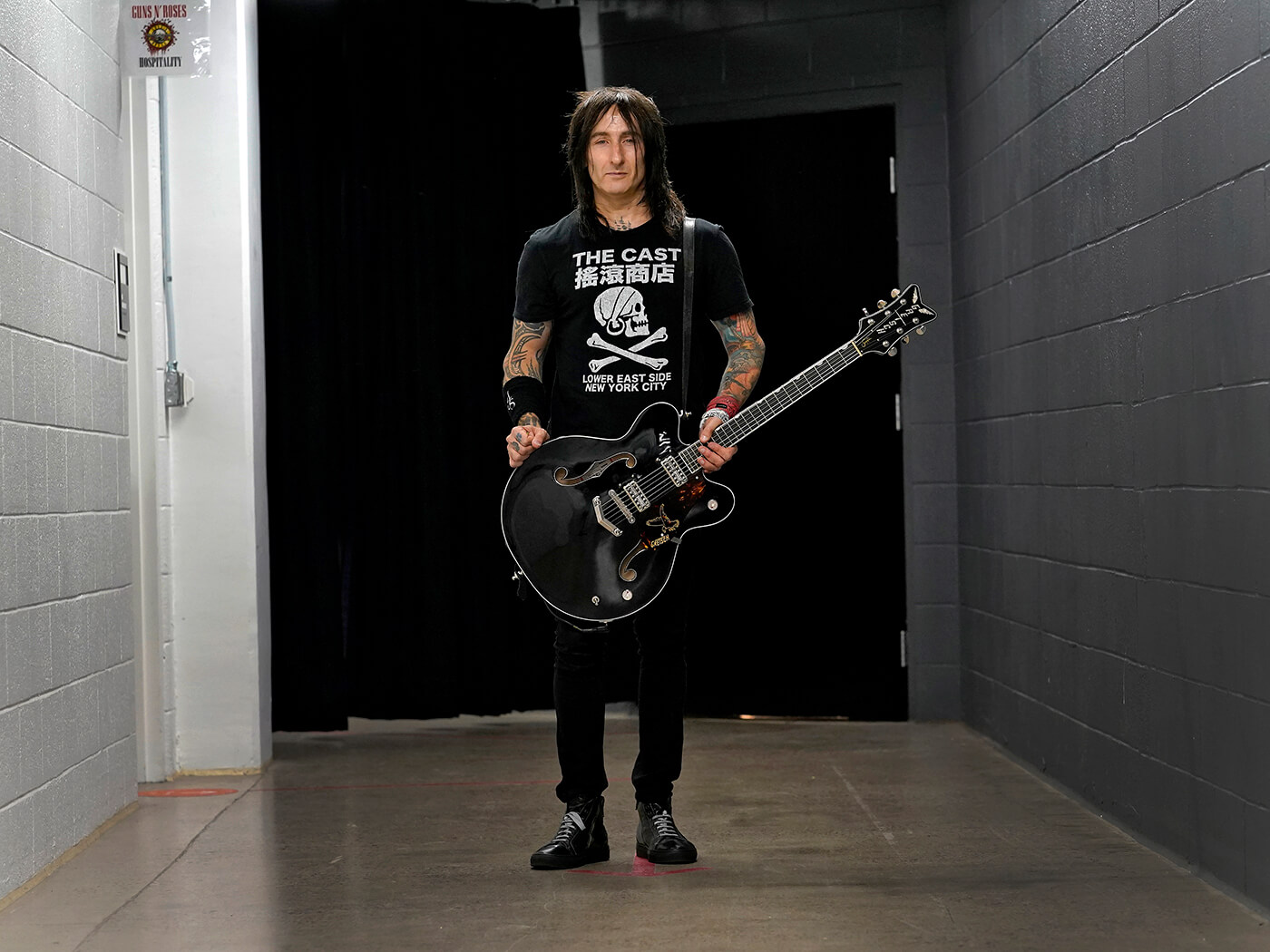 You are known for your love of a detailed, rich sound. How did you approach the pickup choice for these guitars?

“In the studio I like to paint with a broad palette! Filter’Trons have always struck me as being a hi-fi, information-rich sound especially with clean tones. And yet they work well supporting a PAF or anything like that with a higher output.

“I tried using Arcane pickups in the prototype – I use them in my falcons. However, I wanted to use a chambered spruce centre-block in my guitar to allow for higher gain stuff without feedback at stadium volumes. The Arcane pickups were not happy at all! It was a massive learning experience for me.

“It’s remarkable how much a centre-block changes the interaction between the guitar and the pickups. So we started experimenting. Gretsch was incredible – listen to this – John Gaudesi from Gretsch actually brought a pickup winding machine to our rehearsal space! 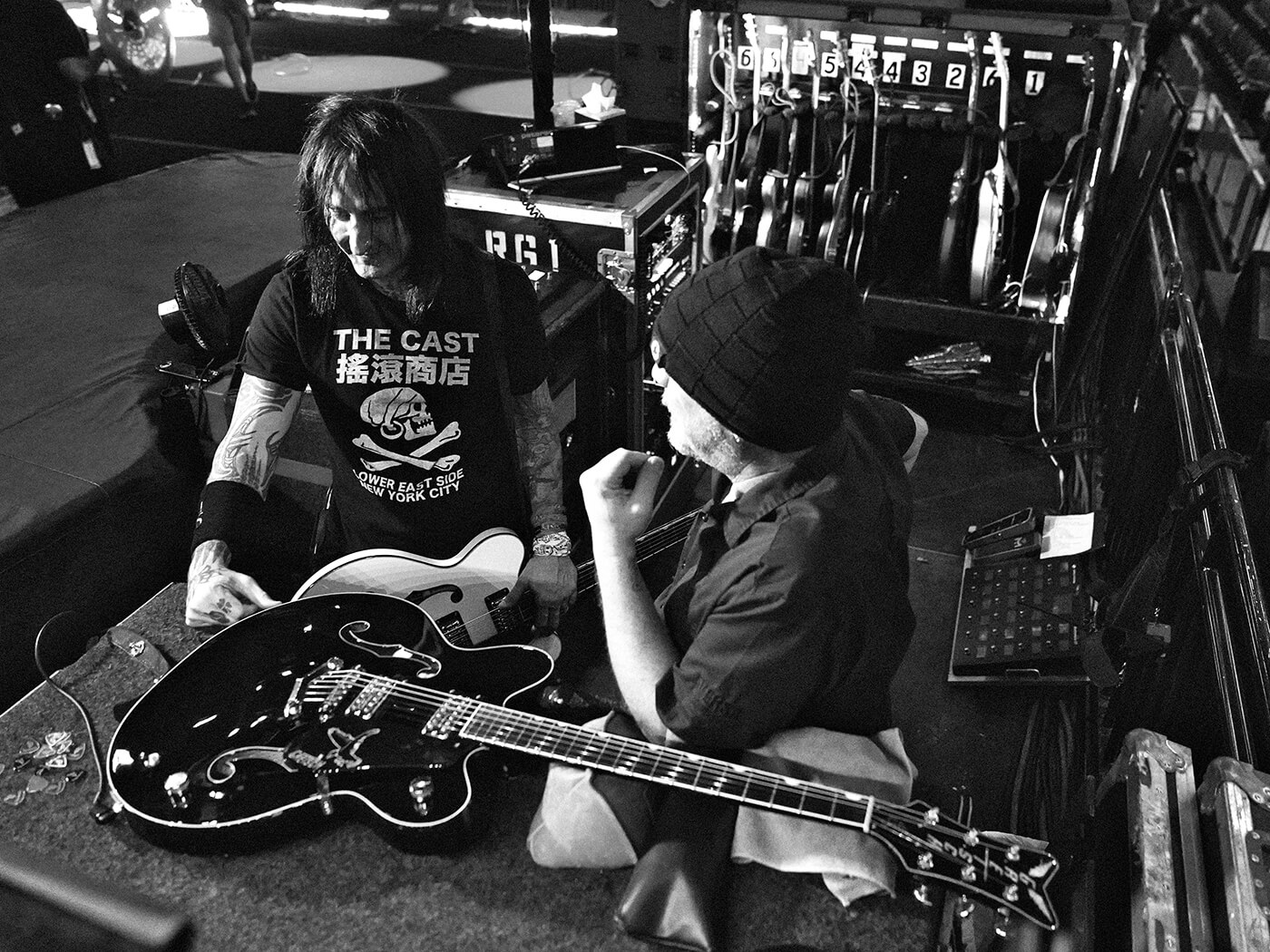 Does the simplified control approach carry on into how you run your amps?

“Most of the time playing rhythm my amp settings are pretty jacked up.  I control everything from my volume knob. I was struggling with that approach with the prototypes and I couldn’t work out why until I realised that the guitars had been wired with linear taper pots which have a much different sweep than an audio taper pot. I didn’t realise how many companies have switched to linear taper pots as standard – and that just doesn’t work for me. I want that drop off!

“I use single channel amps and volume control – I think it’s a dying art. Slash and I are constantly on our volume knobs for our clean and driven sounds. I think in the 80s people got used to either switching channels or just switching amps! You know, even when I’m in the studio and going for a clean sound through my ’59 Deluxe or an old Magnatone I will find the sound by cranking the amp completely and then backing off from the guitar. You get a natural compression happening that you just don’t find in the “clean channel” of an amp. 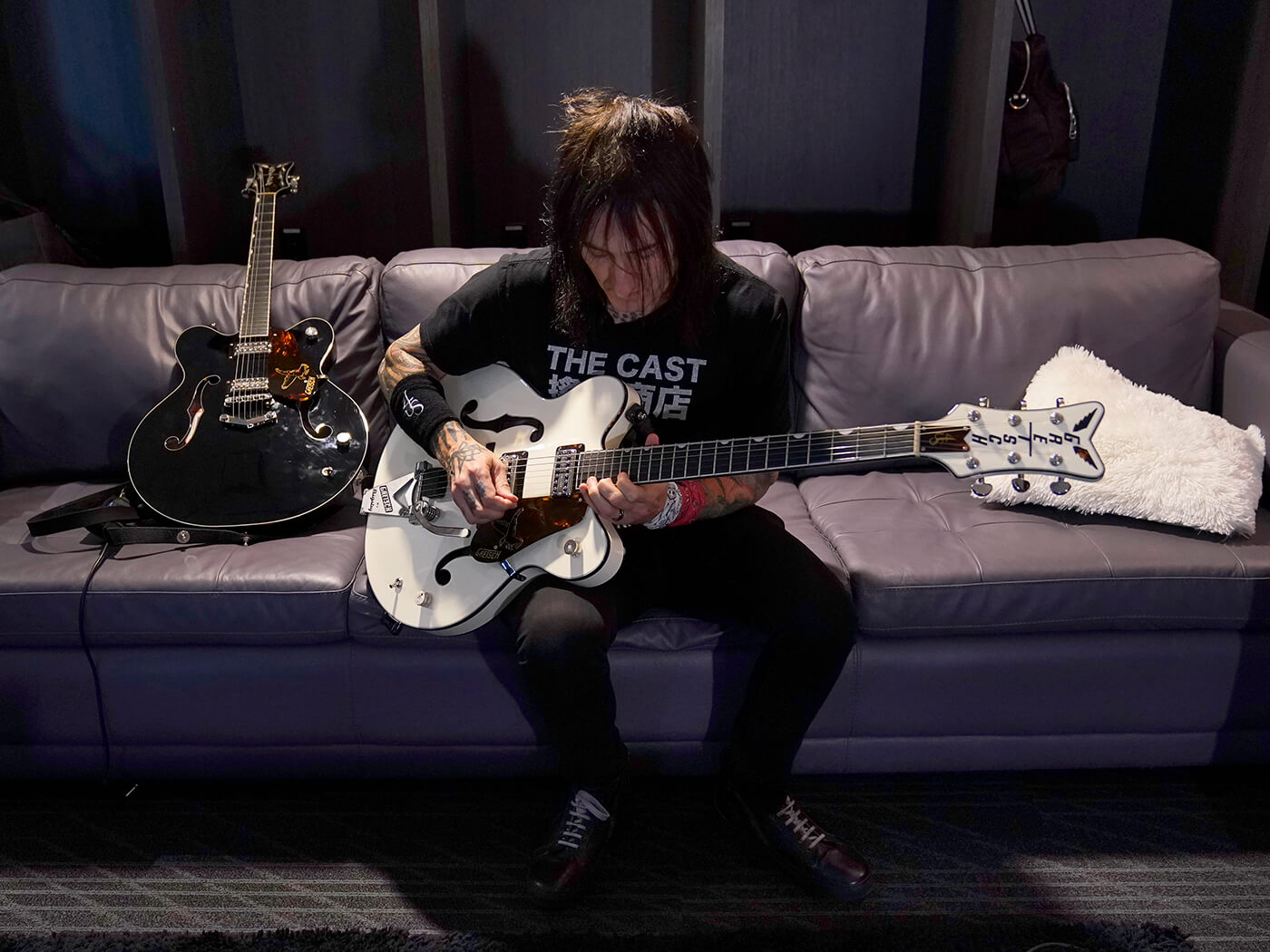 You are well known as a modder of guitars – do you see these instruments as platforms for people to get freaky with pickups and other mods?

“I don’t know – there’s nothing out there like these guitars in terms of sound and playability and believe me, I’ve looked! The range and quality of tone is amazing and that’s what I’m most proud of. To me they are perfect.”

Find out more at gretschguitars.com.