“We were just making music for the sake of music again”: Rolling Blackouts CF on their new album Endless Rooms

The Russos call it the Basin or the Basin House. It’s out in the bush, about two-and-a-half hours north of Melbourne. Before, it was the family sheep farm. Tom’s folks helped build the structure in the late 1970s. His aunt and uncle live there now. It’s pretty rustic, he says, and it’s a good place to make a fire, to cook for your friends, to hang by the lake. It’s also a good place to make a record.

It’s only been a few years since we last heard from Rolling Blackouts Coastal Fever but so much has changed in that time. The band’s vibrant second LP Sideways to New Italy was released in the summer of 2020, into the not-so-vibrant world of the covid-19 pandemic at a time when Melbourne was in and out of long, sapping lockdowns.

Confined to their homes, Russo and his bandmates – his bassist brother, Joe, fellow guitarist-vocalists Joe White and Fran Keaney, and Perth-based drummer Marcel Tussie – started toying with new ideas right as their previous batch of new ideas made their way into the world, blinking in the light on empty streets. “We just put the songs out there,” Tom says. “Music wasn’t the top thing on everyone’s minds.”

Later that year, a gap opened up in the restrictions, long enough for the band to take these new ideas north to the Basin House. “It seems like time’s a bit of a warp the last few years,” Tom says. “For the first time, up there, the songs kind of took life as a band thing. We didn’t really know what we had. It’s all well and good to have demos but with us it’s the chemistry of the five of us.

“We got together and played them and were like, ‘This will work’. Then we were back in lockdown. We literally just made it – these were the dates that were going to work and the restrictions eased pretty much just as we were ready to go up and do it. That was our shot. If we didn’t do that, it was going to be tough. But we got up there. And that was a kind of blessing. It was good to all be together for the first time in ages. We had that communal experience.”

The songs they hashed out in that gap have become their marvellous third album Endless Rooms. The chemistry that Russo points to is still evident at each turn. But here Rolling Blackouts Coastal Fever are looser, less propulsive than they have been in the past. The rhythm section is more playful and demanding, weaving wandering basslines and snare rolls together, while the guitarists play scratchy, insistent melodies off washes of colour from vintage synths. There are moments that recall the oscillating post-punk of Wire, others that zone out into sun-dappled psych-pop, and plenty that hit the band’s dynamic indie-rock sweet spot. 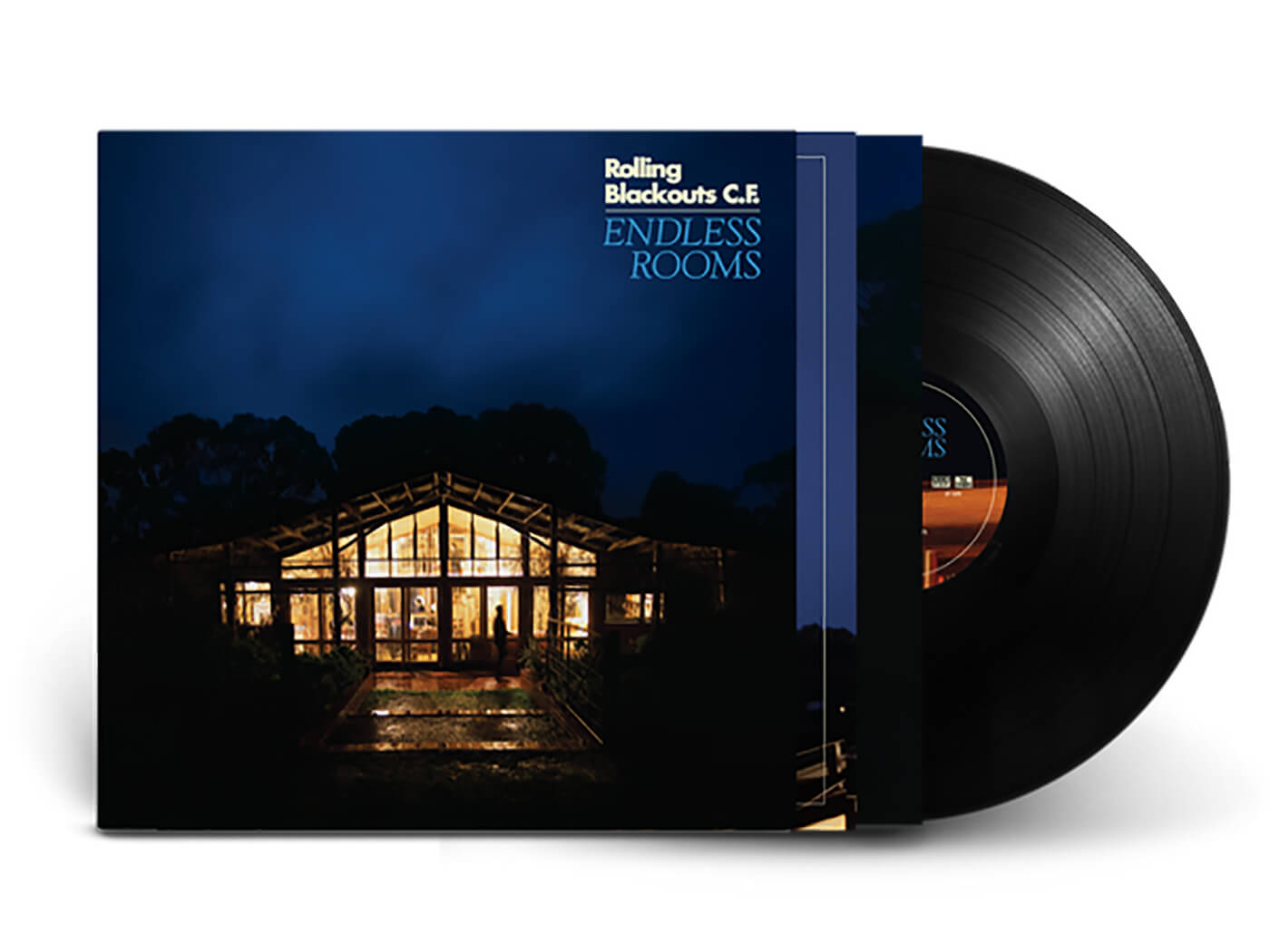 “I guess the biggest thing was that [lockdown] forced us out of the routine or cycles of being in a band pretty much full-time,” Tom observes. “We were suddenly on our own and we didn’t have any shows to play. We were just making music for the sake of music again, without any real sense of what it was for. There was a real kitchen-sink quality to it. I bought a Roland TR-8 drum machine, which had all the classic 808/909 sounds on it, and was experimenting with that in a big way. Some of the other guys had gotten a few little Yamaha synths and were playing around with them.

“There’s a lot of new instrumentation on this and new ways of writing, we approached it from different angles. It wasn’t the full-band experience thing. I was listening to a lot of ambient music – good to soothe the soul at a pretty intense time. I was not listening to a lot of guitar music. We were giving ourselves permission to throw whatever we wanted at it with no preconceptions of trying to make a Rolling Blackouts record. But when we got together we couldn’t help but sound like ourselves. We like pop hooks, and I guess we can’t help that. We went out into the weeds and then brought it back. We could have made it much more bloated and weird with some of the wacky stuff that got left out.”

Sideways to New Italy came together with producer Burke Reid at Head Gap in Melbourne. It was the band’s first time working with a producer and their first time recording at a true bells-and-whistles studio. With Endless Rooms, the stylistic diversions and clever editing decisions are perhaps more impressive because they belong only to the band: by self-producing, they gave themselves the freedom to disappear into their own motivations and mores and, interestingly, they settled on a sense of song-serving discipline instead.

“We’ve been a band for a while now and we had a bit more confidence to back ourselves to know the sounds we want to go for,” Tom says. “And we learnt some great stuff from Burke, who pushed us hard and made sure we weren’t lazy. We all got a bit better at home recording, especially Joe. He’s probably the most advanced. He had a nice setup and did some self-produced demos, we messed around with the production and everything on those early versions of the songs.

“We had Matt Duffy, who engineered the thing and kind of helped us shepherd it, he’s still got all the nice gear and the know-how. He did our first two EPs, which was a pretty rudimentary process recorded over a weekend. We’d all learnt a lot since then. We did the mixing remotely with Matt as well after the fact. We were all sitting there listening to it, essentially live mixing it all together. All of us had an idea of what we wanted. It really was quite an easy, natural process.”

Russo’s own sound is also all about doing things in a way that is simple and unfussy. Where White might get permanently lost in a room of guitars and amps, he is happier with the Gretsch Black Falcon he plays on the road and a small circle of pedals, including an EarthQuaker Devices Sea Machine that he is quite taken with. “I have a few modes: reverby clean, a little bit more overdriven or boosted, and chorusy. I play it with a pretty straight bat,” he says.

“The Gretsch is such a beautiful-sounding thing,” he adds. “It’s very versatile and it’s really clear and loud. That suits my style of playing. I’m not as adventurous as Joe. On Endless Rooms and a couple of the other songs I played my partner Thalia’s beautiful Nash Stratocaster. It’s got this classic Strat sound and it’s clear as a bell. Apart from that I stayed pretty true to the Gretsch. It’s just so versatile. It just does what I need.”

White’s playing – often on a Mustang or Jaguar – is the more decorative of the two, with Russo’s leads and solos holding on to real grit and ballast. Some of that is tied to his relationship with the family guitar, a ’59 Gretsch that has a gnarly tone all of its own. Even though it sat out these sessions, it has a pull that Tom can’t get away from entirely.

“It’s still kind of spiritual, you know?” he says. “It has a very particular sound. My dad bought it from his barber back in the 70s for a hundred bucks, apparently, and it sat under the bed for about 20 years until I found it. It’s got some really interesting homemade wiring, so it really kicks like a mule. It was very buzzy and I don’t even want to fix it up – it sounds like it sounds. My current one can do what you want it to, so I didn’t feel the need to go back to that Gretsch. I still like that skronky sound – that’s in my playing. I keep it pretty clean most of the time and you can hear it whether I do lead or rhythm, that’s just my sound.”

Rolling Blackouts Coastal Fever recently wrapped an Australian tour that has been in and out of their diaries for two years. Past and present collided on the road, with songs from Sideways to New Italy finding renewed purpose just when it seemed like time had left them behind. With selections from Endless Rooms pacing anxiously, waiting for their chance, the cumulative effect is to make the band appear like they have assembled a deep, nuanced, exciting catalogue seemingly all at once.

“We had to relearn them, some of them from scratch,” Tom says of the older tunes. “It was a bizarre experience. I feel like the Endless Rooms ones are so much more recent and Sideways… kinda got skipped. It was good to play them for the first time, they kind of took on a new life. They just got their flowers belatedly.”