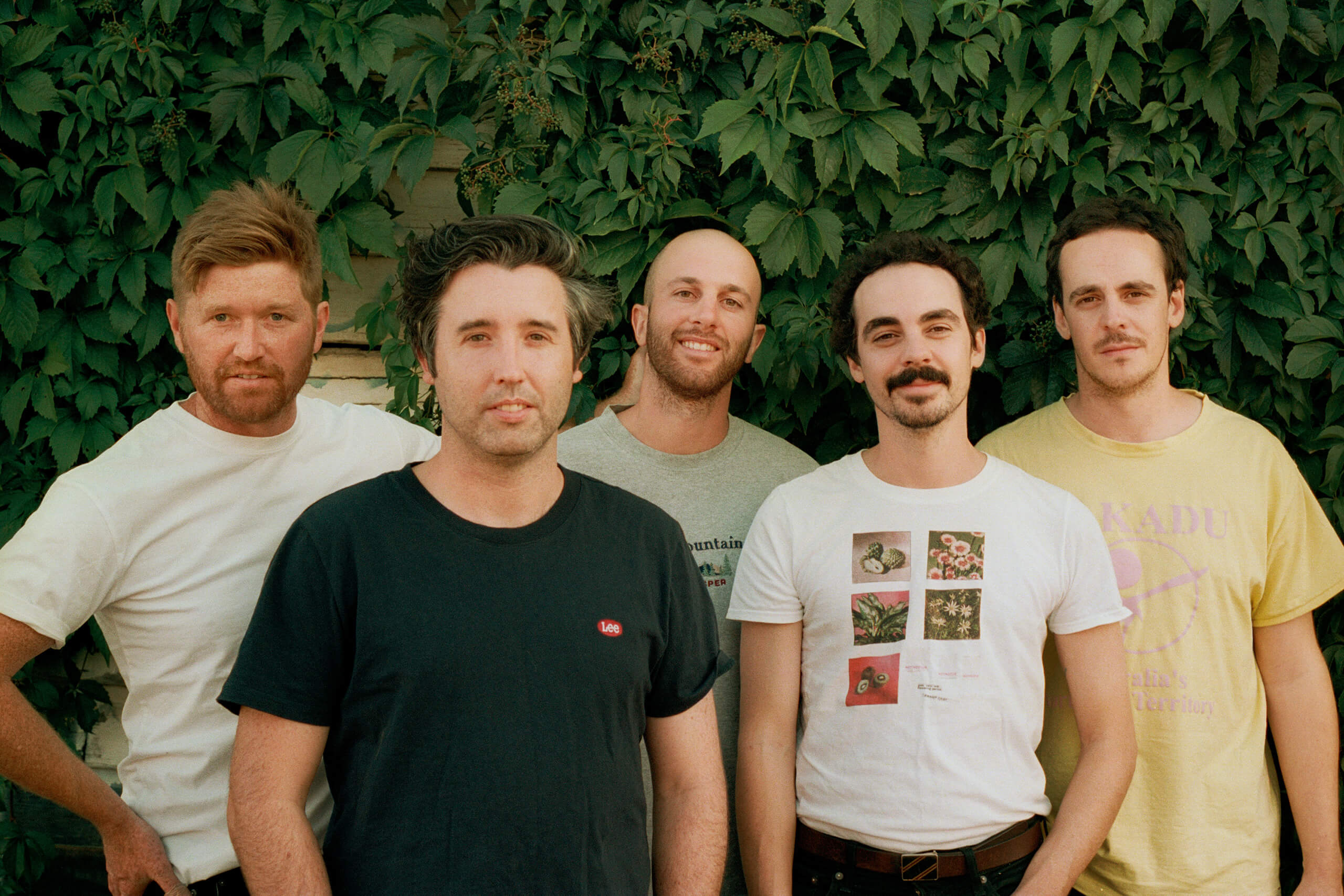 Introducing… brings you an in-depth conversation with one of the hottest and most exciting new guitar acts on the planet. From influences and early experiences to gear and tone, this is everything you need to know about the guitar stars of tomorrow.

The second album from Rolling Blackouts Coastal Fever begins with a moment of delayed gratification. Ten seconds into its opening song, they string out a spidery riff, waiting for Marcel Tussie’s snappy snare and driving hi-hat to skate into view. Once they’re all in the same place, The Second Of The First kicks on towards the horizon. It sounds like summer and friendship and cold beers and long nights with nothing to do but talk shit and make plans.

On their 2018 debut LP Hope Downs, Rolling Blackouts followed up a brace of well-received EPs with a set of detailed jangle-pop sketches that they’ve filled in with lurid splashes of colour on its magnificent successor, Sideways To New Italy. The Melbourne quintet – guitarist-vocalists Joe White, Tom Russo, and Fran Keaney, bassist Joe Russo, and drummer Tussie – have loosened their vice-like grip on the breezy blueprints of their early work just a little, allowing cosmic rambling and flashes of heady emotion to augment their sound.

Album two’s story begins with the band landing back in Australia after wrapping up touring the debut record. With miles on the road filling the bags beneath their eyes, they set about getting used to being at home again only for a fog of detachment to take hold. After so long away, they’d lost track of what it meant to navigate familiar streets. As well as scratching an itch for more sweet jams, their new music ensures that won’t happen again.

“We’d been home for a few months, and it was feeling different,” White says. “We started writing songs that spoke to that idea. We wrote love songs, songs of connection, songs of hope.”

The LP’s title has something to add to this conversation. New Italy is a village of around 200 inhabitants in New South Wales’ Northern Rivers district, close to where Tussie is from. It’s a tiny speck of a place a short hop from the Pacific Highway devoted to telling the stories of its founders and those of other Italian immigrants. It wears its cultural history on its landscape, in the form of museums and monuments, and it doesn’t forget. Rolling Blackouts have attempted to mimic that dynamic here.

“It’s this idea of taking home with you,” White adds. “Taking what you love wherever you go. What we tried to do in the end was put ideas of our family all through this record. My partner and a good friend of the band, they’re on the opening track in a little spoken word part. A friend of ours, Laura Jean, did some vocals and saxophone. We were trying to keep what we love close to us.”

But Sideways To New Italy didn’t emerge perfectly formed. Its thematic concerns came into greater focus once its tracklisting took shape, with Rolling Blackouts permitting themselves a more open-ended writing process in search of material that could keep them engaged over time. “We deliberately tried to have the songs less written before we brought them to the band,” White says. “We used a much more collaborative approach. Songs like Cars in Space, The Second Of The First and Cameo, were very loosely put together before they came into the room.

“All the songs we’d written in the past where we’d used this approach are the ones we get most excited about still. We wanted to try and capture that as much as we could. In the end it might have created a long way around to writing the songs, because it did take a lot of time, a lot of trial and error, and a lot of jamming and listening back. It didn’t always fall together beautifully. It took its time, but that’s okay.”

Pushing back against this rambling exercise was the band’s nature as a hook-focused outfit. Their music might cross paths with post-punk, sun-bleached West Coast rock and Aussie grafters like the Saints, but it chiefly exists to provide shots of melody. The interplay between White, Keaney and Russo is essentially a relay, with the baton being passed between them as they complement each other’s vocals with riffs that carry their own addictive weight. “We use the guitar as a strong voice in our music, and we create lead breaks that are almost choruses in themselves,” White says.

Sideways To New Italy was recorded at Melbourne’s Head Gap with Burke Reid, whose CV features records with Australian indie-rock royalty in the Drones and Courtney Barnett, plus a recent outing behind the console on Julia Jacklin’s dreamy Crushing LP. “We’d never worked with a producer before,” White says. “To have someone else in the room who’s being an advocate for the listener, the outsider, was so important. It was a real eye-opener for us.

“We thought, ‘We can’t write another Hope Downs’. We took that as a reason to be more experimental in all sorts of ways. Burke was the outside influence that we needed for grounding and direction. To think about songs so deeply is something we’ve never done before. It taught us how a song can be greater than the sum of its parts when each part is holding up another, like how a bassline can help out the vocal line. In the past, we would have ploughed through without thinking about that too much. He was able to get us to articulate what we were trying to do, and gave us a reason to do what we were doing.”

White may be selling Rolling Blackouts a little short here. Their three guitarists have been sharing space on concise songs for a while, operating in tandem with one another in a manner that suggests a deep understanding of the nuts and bolts of their sound. Keaney’s acoustic is a textural element, flitting in and out of the frame, while Russo’s playing is wedded to his family guitar – a ’59 Gretsch hollowbody with a Bigsby – in a manner that suggests as much self-discipline as it does thrashy Neil Young-style punch.

“Tom’s guitar sound is exactly the same for each song,” White says. “That’s no secret. We’ve always stuck with that. It’s this gnarly Gretsch tone. He writes his lines, and we come with lines that sound good on his guitar. My side of things is to provide that point of difference.”

That point of difference often comes in the form of lead parts that spiral away from the songs’ core melodies in pyrotechnic fashion, utilising the band’s metronomic rhythm section as an anchor. Sideways To New Italy has a little more grit under its fingernails than Hope Downs did, a canny decision that adds visibility to White’s slashing counterpoints, fomenting their sense of intrigue. “I think that was a product of having a lot of different guitars, amps and pedals at my disposal,” he says.

“I had a wall of amps and had so much fun on the first couple of days going through each track figuring out which guitar and which amp. I wrote down all the settings, and fully nerded out, which I’ve never done before. I’ve always just plugged in and let it rip. I took a more methodical approach to finding the right sound for each song. It was a pleasure to use those guitars and amps, and Burke’s got a great ear for that kind of thing. We had a lot of discussions about tones.”

He adds: “At the end of the day it’s the melody that’s the most important thing. We start with that, and the tone of my guitar is a little bit of window dressing to an extent. I don’t want to diminish it too much, but there’s sort of two things that inform the listener about what kind of music this is: the snare tone, and the guitar tone. We’ve got all these clean tones, we’ve got an acoustic guitar, we’ve got a punchy snare.”

White leans into Rolling Blackouts’ surfy side with his gear choices, relying heavily on a red Fender Mustang that he picked up after a beloved Telecaster was stolen from his car a few years back. “I mingled a fair bit [on the album], but the red Mustang is all over it,” he admits. “I recently put Lollar pickups in it, maybe the week before we started recording. It was all a bit new, but they’ll do anything you ask them to. There was also a ‘67 Jag in the studio that had an incredibly responsive whammy bar, you just had to touch it and you had this beautiful thing going on.”

As a whole Sideways To New Italy is packed with beautiful things going on. It’s a loose, exciting ride that provides an immediate dose of escapism. It’s music for wide open skies and last-second diversions. That sort of freedom runs bone deep. “I grew up playing guitar but never had lessons or anything, so maybe that’s got something to do with my different approach,” White admits. “I like to get rid of any thoughts and let the fingers go. See what happens.”