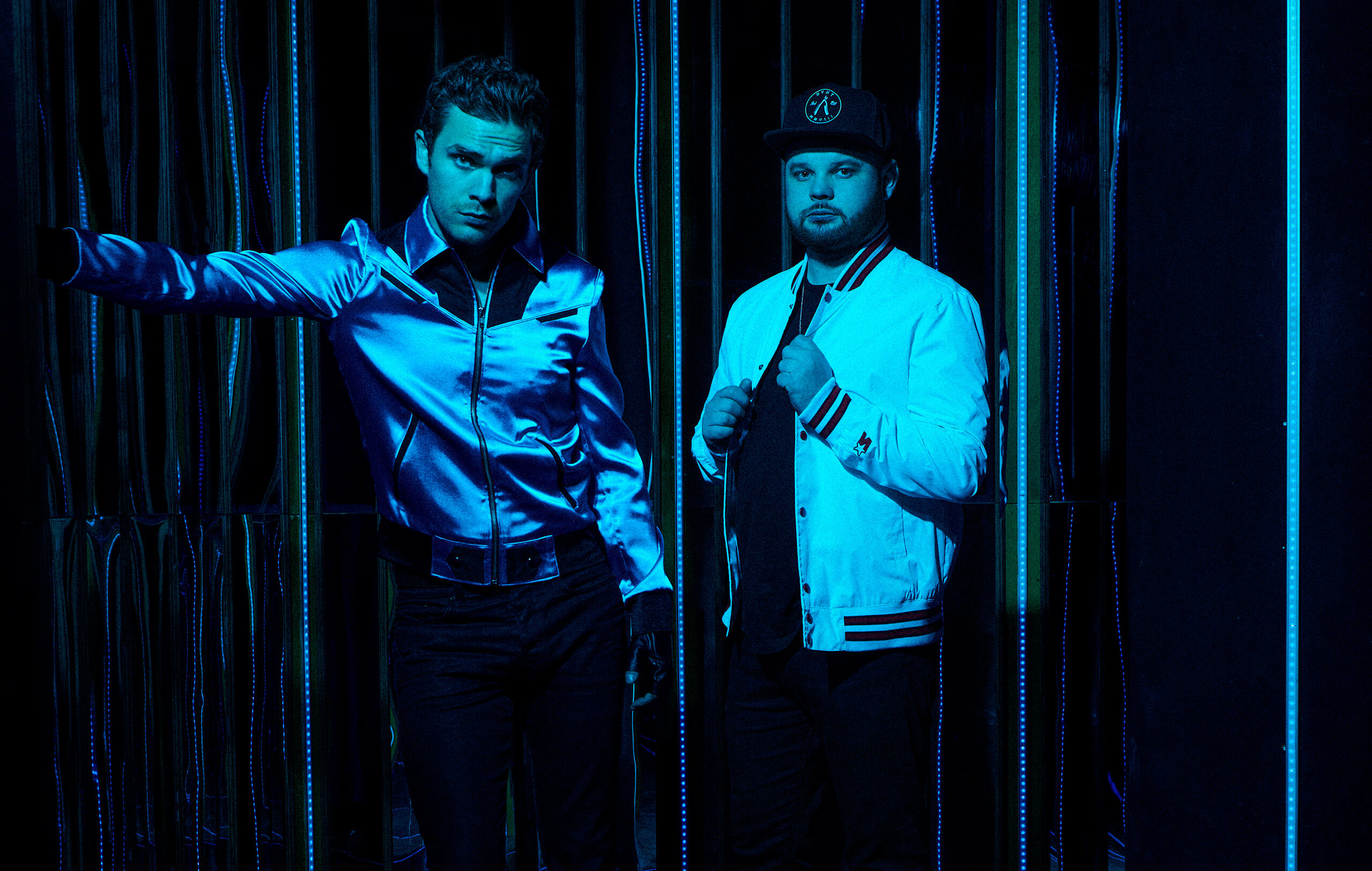 ​“I feel like a bass player on this album”: Royal Blood’s Mike Kerr on why he’s ready to embrace ‘organic’ tones

The Royal Blood frontman on overcoming impostor syndrome, finding the right balance of riffs and hooks on new album Typhoons and why he’s learned a few tricks from the scores of people trying to unsuccessfully emulate the secret of his monster bass sound.

If you’re aware of Royal Blood, then you’re also aware of the sound — the crushingly heavy, obscenely loud noise that rolls from Mike Kerr’s bass, striding forward in tandem with Ben Thatcher’s thunderous drumming. There have been two-piece rock bands before, and there will be many more in the future, but few have been so concise in their desire to shake fillings loose. The secret of their success, though, is for them to know and us to ponder, experiment and wonder over. Ask Kerr what his amp configuration and pedal setup is all you want. He isn’t going to spill.

“I was so excited when I discovered this sound,” he admits. “But at the beginning, I had impostor syndrome. I gave so much of the credit away to the sound. Over time, I’ve realised that, actually, you can’t just walk out with that bass sound. You have to have good songs. And there’s a bit of fun in not telling someone. I’ve seen videos of people going and emulating my sound, and they do it so wrong. But they find things that I haven’t discovered. There is creativity in the attempt.”

Royal Blood’s new album Typhoons situates Kerr’s bullish, riff-based playing in fresh surroundings. It recently became their third number one in the UK – following up their self-titled bow and 2017’s difficult second album How Did We Get So Dark? —but it crested that peak by doing something different. Gone is that muscular, fuzz-fuelled stomp, with pastel-hued pop-rock and synth flourishes inspired by Daft Punk, Justice and the production of the late Cassius co-founder Philippe Zdar in its place. “It’s drastic in its own context but ultimately we feel these songs are going to be friends,” Kerr says when asked how the new material might sit alongside old favourites live.

“We just made sure that the core of the music was bass, drums and my vocals,” he adds. “It was almost like that was 75 per cent of the content, so it was about the ratio of old with new and getting that balance right. Once we got that, it was about carefully injecting new sounds around what we were already doing. I will say, though, that even the 75 per cent of the core sound had shifted a bit, in that it was a much more bass-driven sound rather than loads of pedals and octaves. It felt a little bit more pure in terms of a bass sound. Obviously it’s processed, but it felt more true to how Joe Bloggs knows what a bass is.”

This shift in priorities was signalled early on. Boilermaker, all skronk and golden age percussion, and Trouble’s Coming, as close to Royal Blood-goes-disco as we’ll ever get, were the first cabs off the rank. Kerr still has a stack of boisterous riffs to hand but his playing is more empathetic, underpinning string stabs and playful keys. Is his relationship with Thatcher more like a traditional rhythm section than it has been in the past?

“100 per cent. I feel like a bass player on this album,” he says. “I felt like a guitarist on the others. When you have loads of pedals on it changes the way you play, you know? In the same way, when you try a new pedal you react to what that pedal is doing, and it almost informs your playing a little bit. So the bass sounds I was making really informed a lot of the parts.” 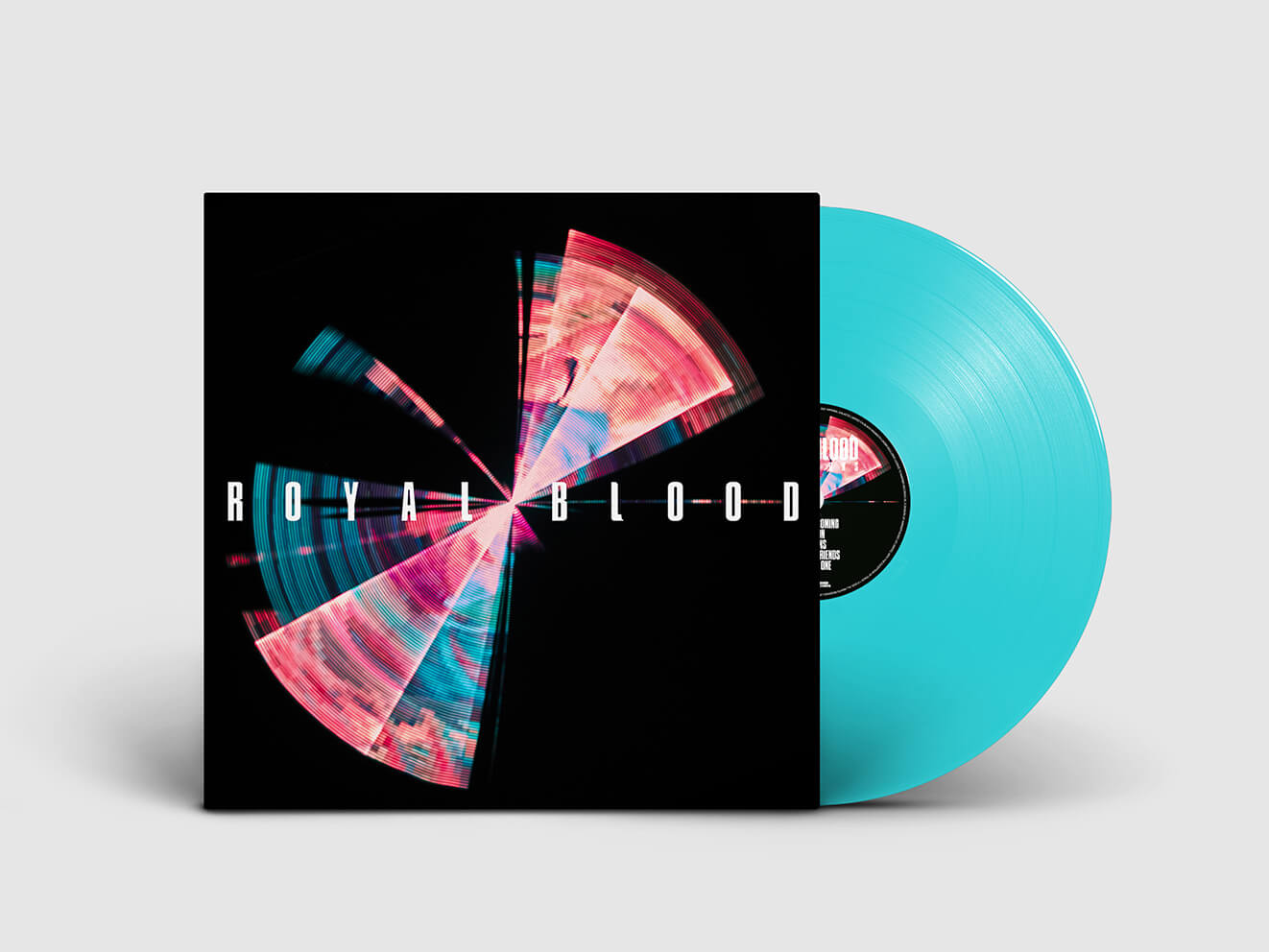 Kerr’s state of mind when writing also played a major role in how Typhoons shaped up. It’s your classic Abba-style collection that hides some crushing lows amid songs that outwardly implore you to lighten up and follow your hips to the dancefloor. He struggled with depression while making How Did We Get So Dark? and as those songs moved from studio to stage he slipped into the often hedonistic mechanics of being a touring musician. Eventually, he was rocked by how easy it was to function while drinking as heavily as they were. Typhoons is the work of a sober musician who wants to celebrate a change in circumstances, but also a musician who’s only really about writing what he knows.

“I think it came from how I was feeling,” he says. “I’d just come out of quite a dark spot in my life, and I felt fucking amazing every day. So when I was making music I just had this energy and I wanted to reflect how I was feeling. But, lyrically, all I wanted to talk about was where I’d just come from. It was kind of a happy accident. It’s a juxtaposition that really gave me new life to continue writing songs in this way, because it wasn’t as weird as it sounded on paper.”

The pandemic drove a train through the middle of the process, with the first lockdown hitting midway through recording. Rather than waiting, Kerr and Thatcher wrote a further batch of songs, including the glammy title track, that altered their whole approach, pushing them towards a sound that didn’t reflect the world outside their studio walls. They produced the album themselves, wrangling this fresh palette on their own time and discovering that they enjoyed the extra responsibility on their shoulders.

“I think we found it liberating,” Kerr observes. “Once we knew the record we were making, and we had this vision, it was so clear. It was really about just capturing the songs, and I think when it comes to recording and getting good performances that’s where we fly. We didn’t have any fear about it sounding good, or being played and recorded well. We had such confidence in the material, and from that point onwards it wasn’t scary to make at all.” 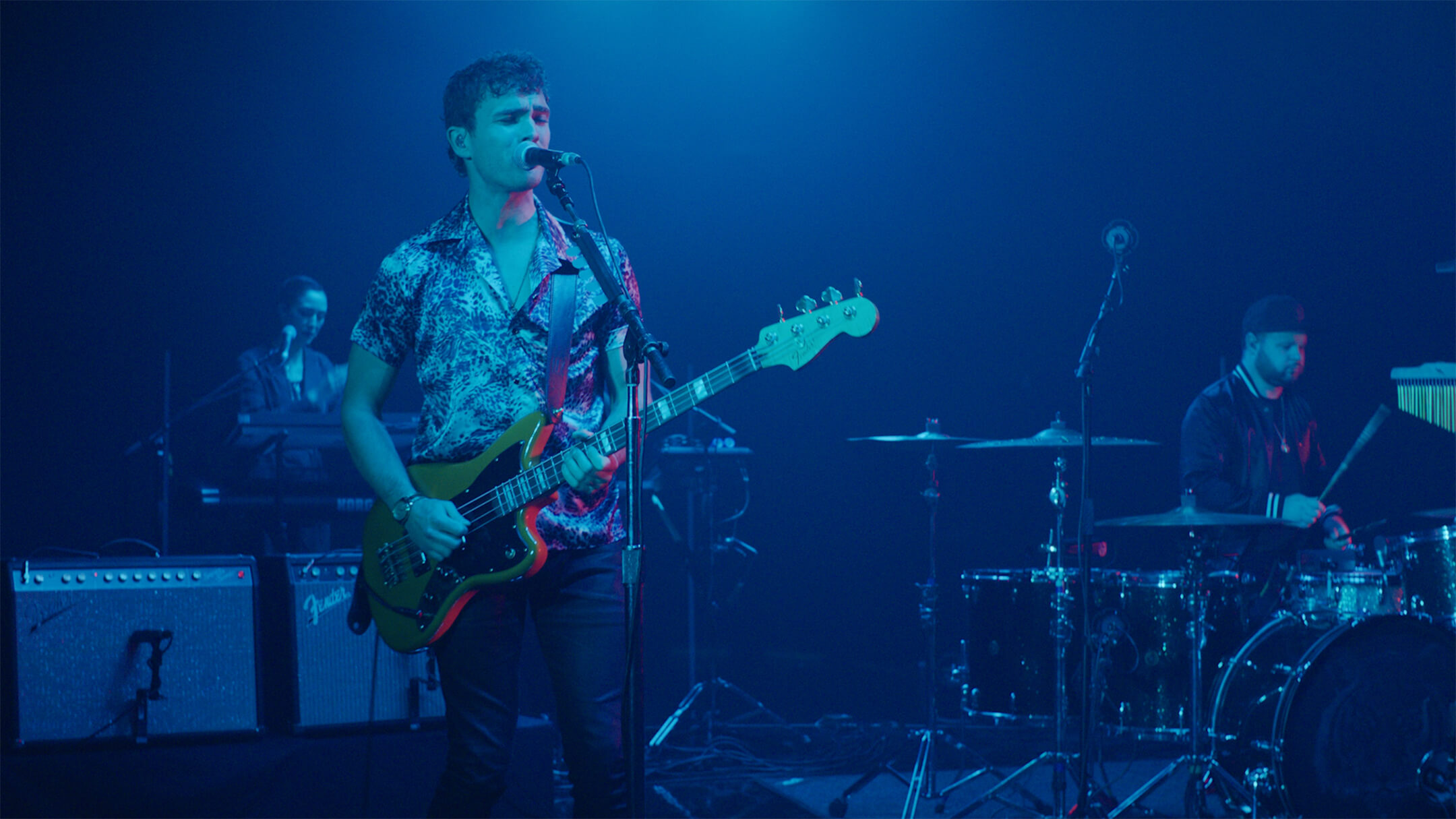 Early on, they had a helping hand from someone who was among the most important influences on Royal Blood as a band: Queens of the Stone Age leader Josh Homme, who is joined by Jeff Buckley, Jimmy Page and Jack White as Kerr’s favourite guitarists. “They all begin with J, for some reason,” he says with a bemused laugh. Along with Paul Epworth, who helmed the rumbling Who Needs Friends, Homme’s is the only other name among the production credits, for his work on Boilermaker. Kerr took plenty from the experience, particularly in focusing on his words and his performance as the band’s de facto focal point.

“Being a singer in a band isn’t something I ever dreamed of,” he says. “I just wanted to play. After that first record I suddenly found myself in these shoes. I had quite a lot of growing to do. On Boilermaker I found my voice. That was a big moment for me. Another thing I learned is just about using the studio as an instrument, and how creative the recording process can be. In the past, sometimes the studio has just been a place to capture what we do live, and that’s it. The time we spent together was so creative, and we were doing so many odd things in the studio to try and get to new places, that it really rubbed off on us.” 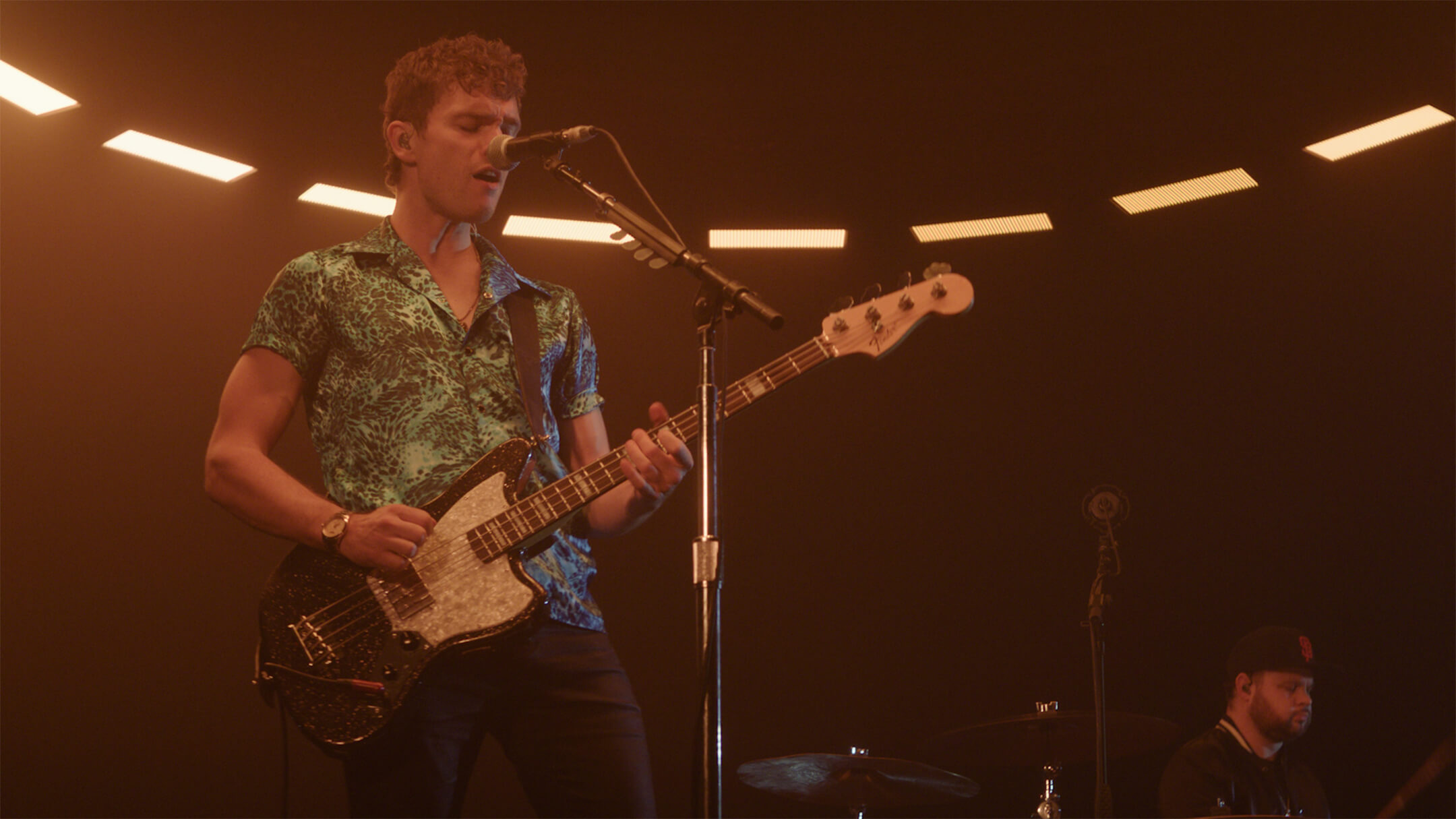 Kerr and Thatcher, who are based in Brighton and hail from nearby Worthing and Rustington respectively, have been playing together since their mid-teens, in assorted configurations under assorted names. Prior to forming Royal Blood, Kerr played piano and keys almost exclusively, a handy skill to have when working on an album like Typhoons, and approaches the bass with a guitarist’s flair for melodic riffing high up the neck. “I didn’t know my way around a bass, but I had the theory in my head of piano playing, so I had the best of both worlds,” he reasons now.

“I think being lost on an instrument is always a creative way to begin. It’s the same with new techniques. The first time someone showed me how to hammer on and off – I know everyone knows how to do that, but I didn’t – it blew my mind. I wrote Figure it Out immediately. I was so inspired by that. Even recently I’ve learned from my friend, who’s an amazing guitarist, what a pre-bend is. Again, something I should know but don’t. As soon as I learned how to pre-bend I wrote Boilermaker. Sometimes learning a new technique can really inspire new ideas.” 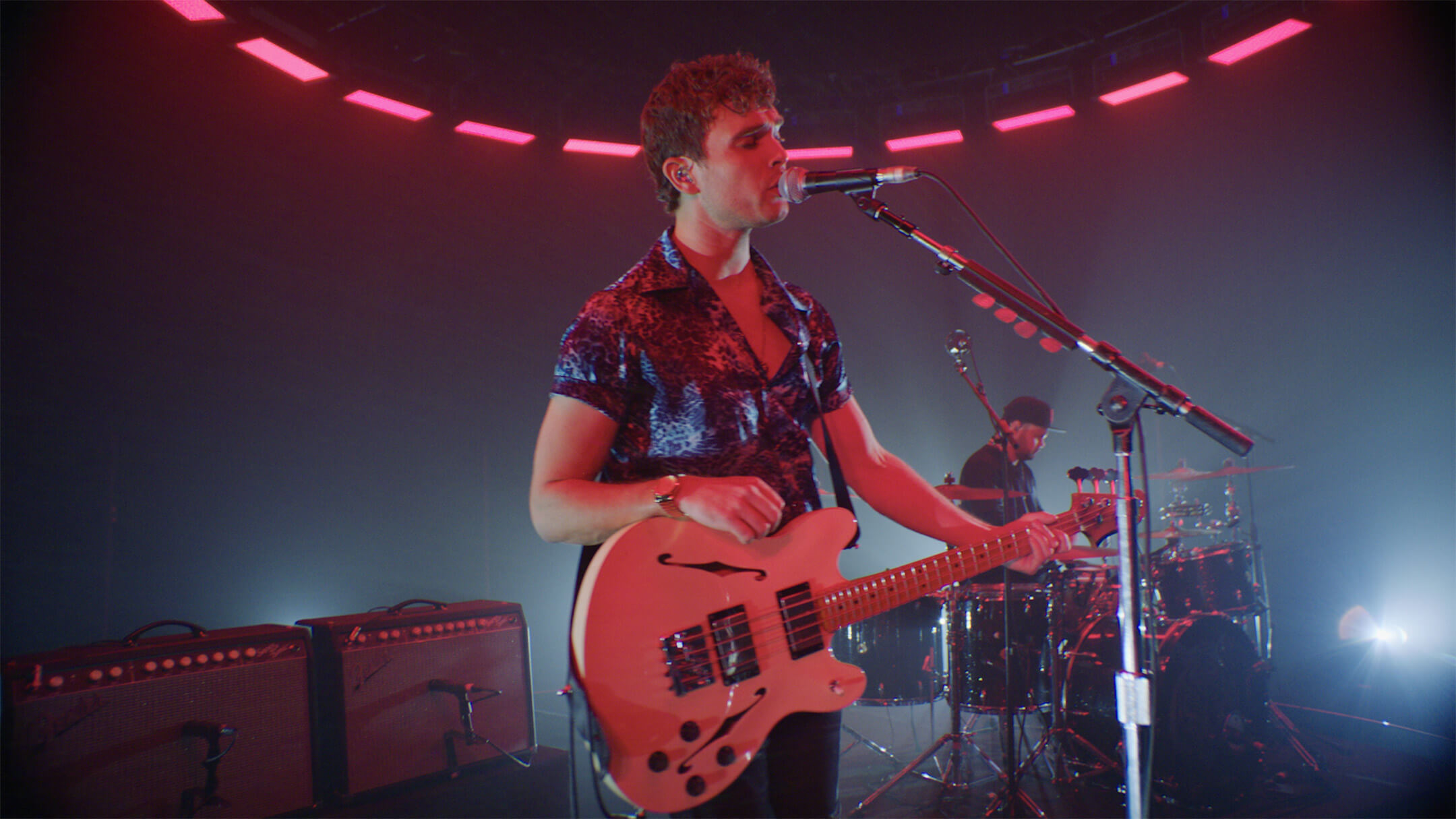 Since Royal Blood first kicked doors down with their debut in 2014, Kerr has experimented with a series of short-scale basses and a multi-amp setup (there are a lot of silverfaces and usually a Fender Super Bassman in the mix but, again, if you want the forensic details you’d best be a good detective). Bass-wise he rotated between a Gretsch Electromatic G2220 Junior Jet II, the first thing he bought way back when, and a Fender Starcaster before settling on the custom Fender Jaguars bass he uses today.

“I think probably 90 per cent of the record was on the same bass, my orange one,” he says. “I think that’s the one I always write on and a lot of these songs were demoed on that. The demos ended up being the final recording, so it’s almost by default that that bass was used a lot. It’s comfortable to play. It’s almost like I trust it. It hasn’t failed me. When I pick it up I know it’s going to give me something back.”

Kerr’s approach to riff-writing is informed by his responsibilities within the band, and also a desire to communicate through the sort of hooks that drew him in when he was a young Queen fan. “I think the word riff is just something we associate with rock music,” he says. “But ultimately a riff is a melody. Riffs exist in classical music, and jazz, they’re everywhere. That’s how I always think of them. My riffs are really things that I’ve hummed out first. I don’t know how to fret them yet, in the same way a vocal melody can be created. I’m always thinking about melody rather than it being a riff.”

Similarly, his riffs have to play nice with his vocals. Back at the start, the songs that made Royal Blood’s name might have skewed crushing (see Out of the Black or Little Monster) or intricate (see Come On Over). Kerr found pockets of space in both modes, providing solid foundations to do something different on Typhoons, where songs such as Oblivion fuse both elements together in a dance-pop song dotted with soul-derived backing vocals.

“It’s all about counterpoints,” Kerr says. “If I have a particularly busy riff, it forces me into a corner to be much simpler with a melody, and the same the other way around. I think, generally, I’m relying on the bassline to give away a lot of the chordal information. I like to avoid doubling up notes on the bass with my vocal, to create harmonic separation. If I’m singing at intervals with my bass then it starts giving the illusion of chords happening, when they’re not. It just helps everything to sound bigger.”

Royal Blood’s Typhoons is out now through Warner Records.