Ruben Wan: “I’m not a boundary pusher at the forefront of the instrument. I’m on my own path”

The Panamanian is part of a new vanguard of digital guitar heroes. With the release of his debut EP ‘Chapter One: Guitar’, he bids goodbye to the style that made him famous. 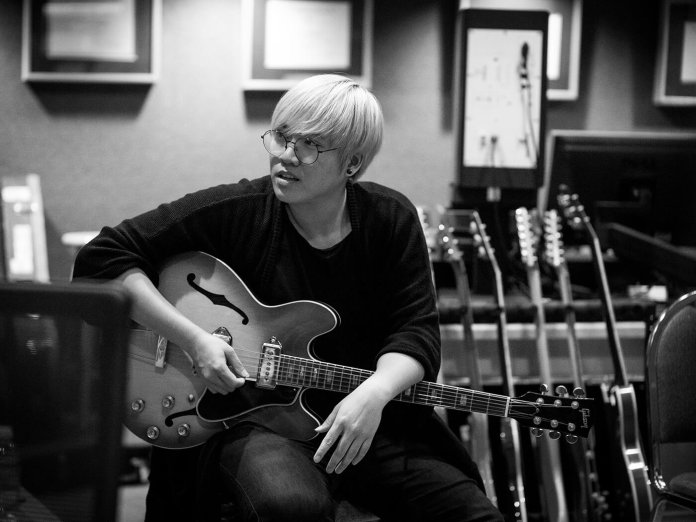 The week Ruben Wan moved to Los Angeles, in 2015, he slept on a hard floor, didn’t know how to pay the security deposit on his room, and got food poisoning from a Chinese restaurant on Hollywood Boulevard.

The Panamanian was 18 at the time, and had arrived in the City of Angels with a single guitar to start university at the Musician’s Institute, a college he chose solely because it was easy to get into. Wan wanted to escape Panama at all costs, and saw career opportunities as a K-Pop soloist. He was otherwise completely naïve.

“I was the crappiest guitarist in my class. I was at the bottom, I could not read [music]. I only knew pentatonic scales when I came here, my arpeggios were crap. Everything was crap about my playing,” Wan recalls.

But in the same course, six months ahead of him, was Mateus Asato. The fellow Latin American émigré was beginning an extraordinary career, soon to be hailed by John Mayer as one of the best guitarists in the world, largely by posting videos of his playing to Instagram.

“I looked up to him,” Wan says. “I told him, ‘Wow, you’re killing it’. And I’m like, I need to practice as well. Being in that environment is what made me whatever I am right now.”

Whatever he is now, six years later, Wan has joined Asato’s ranks as part of a new vanguard of digital guitar heroes – with 250,000 Instagram followers of his own, countless brand deals and now, his debut EP Chapter One: Guitar. His story is a lesson in how to make that happen.

Speaking to Guitar.com, Wan is dressed in the saleable cool of a bleached denim jacket, sitting in a room painted taxi cab yellow. Guitars are hung neatly on every wall. He’s articulate, almost to a fault – when prompted, his narrative comes at you like a sales pitch. Though Wan makes art, by his own admission he is in the business of making art.

“After music school, I went to business school as well and got a Masters degree in business. A lot of the things I do come from a very entrepreneurial side, because my whole family is filled with entrepreneurs,” he explains.

It’s this approach that sets Wan apart from Asato, whom he considers a “true artist”. “He’s a true artist in the whole sense of doing it for the art,” Wan says. “Mateus feels the pressure to continue moving along. He’s a revolutionary, he’s pushing the boundaries of the instrument.

“I’m not a boundary pusher. I’m not at the forefront of the genre or the instrument. I’m on my own path, my own journey.”

That’s not to say Wan is a generic player – quite the opposite. His chops are influenced by the acoustic fingerstyle of Tommy Emmanuel and Andy McKee, smashed against the virtuosic fusion of players like Guthrie Govan; his compositions arrive over neo-soul and gospel chords. Wan doesn’t mind being called an “Instagram guitarist”, because he knows he’s got the chops.

“I owe a big chunk of my career to social media. Everything I’ve been able to do is because I was able to capitalise on the social media game,” he says. “The first time I realised it had negative connotations… I was on this small tour with an artist and after the gig, the drummer told me, ‘Wow, you can really play’. I’m like, ‘What do you mean?’ He’s like, ‘Well, I thought Instagram musicians could only play for the camera’.”

The occasional old-school dismissal aside, Wan’s journey is the envy of many. He began using Instagram in a utilitarian manner – arriving home from his classes, Wan would turn on his phone camera to record and post himself playing exercises from the day. But in 2014, a breakup motivated him to write songs for the first time.

Wan decided to invest in better video and recording equipment, and shared his micro-compositions (“They were literally 15 seconds long, because Instagram [videos] was [at the time] limited to 15 seconds”). Coincidentally, both of his breakthrough videos were linked to the act of seeking comfort in the feeling of instrumental music.

“The first video that ever did well was something called Zelda’s Panda. Pandas are a recurring theme in my videos, and that was the one to kick-start it,” Wan says. “When you’re sad, you find ways to cope with the sadness. And for me, that was playing The Legend of Zelda. I just decided to write a little guitar piece with some Zelda themes.”

The next day, after the video was reposted by bigger pages, Wan notched his first 1,000 followers. It would be chump change compared to his second hit ‘Rain’ in 2017, which in its various uploads, racked up over a million streams.

“I think it was raining in LA,” Wan recalls. “I was just noodling guitar, practising like every other day and I started playing something that went along with the rain sound from outside and I’m like, ‘Oh, let’s expand on this idea’.

On the track, Wan’s clean, chiming guitar has the lyrical expression of early-70s George Benson. Accordingly, Rain broke through to a new audience: Wan notes it lives on at yoga studios around the world, and as a comfort piece without context to many more.

“I wrote something that affected my emotions personally at a later date,” Wan says. “When I was writing it, it had no purpose or anything but now when I really listen to it, sometimes it helps me feel different emotions that motivate me to do other things.”

It would be a distortion to put Wan’s increasing online success down merely to improved playing and videography. In the beginning, he says his audience was filled with “male guitarists who just wanted to emulate what I did”.

“So nowadays, I can confidently say even though a solid 30 to 40 per cent are still those male guitarists, now there’s a good chunk there just to follow me. They just want to know what Ruben is up to.”

Ruben’s own journey to LA would make for a good Instagram-ready narrative alone. Wan was born in Panama to small business owners, selling wholesale goods from Asia to the local population. His parents immigrated from China to Panama in their mid-20s, on the offer of Wan’s great uncle – he’d moved there many decades prior, during the building of the Panama Canal, which employed many Chinese workers.

Wan’s first hands-on musical experience was two years of learning piano at age eight, but it wasn’t until he needed something to do over a summer school holiday that he picked up the guitar at 14. Wan enrolled as the only student in a “Guitar Camp” – he stresses the inverted commas with his fingers – and learned four chords.

“I sat down for five hours a day as a 14-year-old kid learning those four chords. They just filled out my entire three months with joy,” Wan recalls.

A Christian background meant his musical role models at the time were largely YouTube singer-songwriters and Hillsong Church. But by algorithmic chance, when Wan was 17, he stumbled upon a video of Guthrie Govan.

“I see this random recommendation, this guy that looks like Jesus playing guitar. It was Guthrie Govan playing in the style of Larry Carlton and I was blown away. I’m like, ‘Wow, you can do that with the guitar? What the heck is this?’” he says.

From that point on, Wan’s guitar destiny was set. But his entrepreneurial instinct led him through a detour first. Straight out of high school, Wan walked into a soul-crushing internship at accounting firm KPMG. Determined to do whatever the opposite of that was, he joined the Panama branch of the Wilhelmina modelling agency (“I was way skinnier and sharper looking then,” Wan winks). The head of the branch used young modelling talent to throw together a ’50s-covering boy band called Retz – with Wan on guitar.

“He knew it would do well in Panama because Wilhelmina’s clients are all rich old people. They like the Beatles. They like Elvis Presley. They like Frankie Valli,” he recalls. “I loved the attention. Like we got makeup stylists, riders and we’re playing these fancy locations, fancy bars. I was enamoured with the whole ego thing.”

Wan would only last a year in Retz before deciding to move to LA, but the experience evidently juiced him for his social media fame. His debut EP Chapter One: Guitar might foreshadow another extreme career pivot.

The six tracks on the release are purist by nature. They were recorded using only guitar sounds, and one entry-level Donner chorus pedal ordered from Amazon.

“It’s chapter one. I wanted to close off this chapter properly and didn’t want it to be tainted with anything else. I’m known to play over hard beats, harmonise over singers; I do a lot of things with my guitar. But releasing a whole EP of only guitar is significant to me because guitar is what kept me going through all seven years in LA. My instrument and me was what defined my adulthood,” Wan explains.

Across the dreamy instrumentals, you’ll mainly hear Wan play two Ibanez guitars that have become his primary six-strings in recent years: the AZ2204N-PBM and AZ2204B. Wan favours the pair because of their Gotoh vibrato systems – “it’s become my signature thing, and I use it to channel my Jeff Beck and Guthrie Govan influences”. A bright pink Fender Pawn Shop Offset Special appears briefly on ‘Happy Sad’. His whole rig is run through Neural DSP plug-ins, thanks to a relationship with the company.

Wan’s digital philosophy comes from a belief in accessibility. “When somebody asks you, ‘Oh, how do you achieve this tone?’ – a question I get asked a million times every day – the easiest answer is in my songs. I just needed an interface, computer and guitar and I was able to create the sounds you love so much,” Wan says.

But while Chapter One exists perhaps as a primitive record, the second chapter he is working on will abandon that for something grander.

“It’s a mix of my singer-songwriter upbringing and boy band-era Ruben with the seven years I had in LA as a session musician. I’m bringing the two worlds together,” Wan enthuses. “They represent more than just the guitar side of me: the singing side of me, the visual side. I’m planning a few music videos.”

It might have taken seven years, but Ruben Wan is finally at home in LA.

Ruben Wan’s debut EP Chapter One: Guitar is out now.