“I love prog-rock that’s rooted in reality and not the dwarves and fairies”: Ryley Walker on embracing new influences for Course In Fable

The Chicago guitarist on Genesis, Sonic Youth, his new-found love of the DigiTech Whammy and how his fifth album contains the “most complete and put-together playing I’ve ever done”.

Two things about Ryley Walker become apparent early in our 40-minute interview. Firstly, he speaks with a restless, accelerated enthusiasm that’s hugely engaging. Secondly, his brain is like a well-thumbed encyclopedia volume on the great guitarists of our time.

We’re here to talk about Walker’s fifth solo album, Course In Fable, and along the way we cover a whole lot of ground. Starting out at The Verve’s Nick McCabe, the first player to catch his ear as a child, Walker veers from Keith Richards, George Harrison and Jimmy Page to Robbie Basho, Bert Jansch and John Martyn, Steve Hackett, John Abercrombie and Derek Bailey, Sonny Sharrock, Jeff Parker and Bill Frisell, and on to Tom Morello and Thurston Moore.

Course In Fable is a dazzling embodiment of a lifetime’s passion for guitars and guitarists, a near-virtuosic expression inspired by the fusion of genres in Chicago’s fertile 1990s scene, led by Tortoise and Gastr del Sol. It’s the furthest Walker has travelled from the Anglophile folk of 2015’s celebrated Primrose Green and, he says, “the most confident and put-together playing I’ve ever done on record”. He’s calling it, with tongue only slightly in cheek, his prog album.

“I wanted it to sound like if Peter Gabriel was on [Chicago label] Thrill Jockey,” Walker explains, from his home in the hills of western Massachusetts. “I’m a huge Genesis fan. Steve Hackett was doing stuff nobody else did. Droney, feedbacky stuff, tapping, 12-string playing, fingerstyle, solos… Genesis is not prog with a capital P, they had a sense of humour. I love prog that’s rooted in reality, not so much the dwarves and magical fairies.”

While he’s grateful for “the opportunities it brought me”, Walker says the troubadour stylings of 2014 debut All Kinds Of You and Primrose Green belong to a different era. By 2016’s Golden Songs That Have Been Sung, he was pointing towards more ambitious abstractions, less indebted to Martyn, Jansch and Tim Buckley. The evolution was advanced on 2018’s Deafman Glance, and Course In Fable completes the journey. Not one for standing still, Walker has also made two albums with jazz drummer Charles Rumback and a live record with Japanese psych-rockers Kikagaku Moyo.

“The UK prog-folk records were a bit on the nose,” he says. “I was just getting my start, and wearing my influences really hard on my sleeve. That music is still influential because of how innovative and fearless it was. I can’t imagine making something like that again though, but they loom large.

“My bread and butter has always been cyclical droning pieces, from years of being a Sandy Bull and John Fahey fan. This time, I was going for things more rooted in John Abercrombie, Steve Hackett and Derek Bailey, not droney folk, I feel like I’ve said all I need to say on that. It’s all the mystical fairy lyrics I can muster for now, a new era.”

Joining Walker on his journey into the progosphere is longstanding foil Bill MacKay, with whom he’s made a pair of albums of interlocking guitar exploration. On Course In Fable, their fluent conversations dart and shimmy through complex arrangements, an air of rejuvenated joy in the intricate arrangements.

“I told Bill, ‘Make your solos sound like you’re a professor at Berklee in 1985, trying to prove something’,” says Walker. “I like to call them ‘bald guy with ponytail’ guitar players, who have a beer belly and a Yes Fragile tour T-shirt. There’s a hint of irony in the playing, it’s a nod to people who sell used solid-state amps for way too much money.

“Bill’s a straight-up musician, educated, from a musical background. We’re big fans of John Renbourn and Bert Jansch. That record they did [Bert And John], is how we first came together – let’s make a great acoustic duo record, but we always end up talking about Led Zeppelin, Jimi Hendrix or Minutemen, that’s what Chicago music is to me, punk-rock influenced prog. The dynamic between us is really friendly, there’s a push and pull and I’d trust him with any music. His decisions as a player are incredible, one in a million.”

While Walker moved to New York in 2019, Course In Fable is wholly a Chicago record. Growing up an hour away in Rockford, Illinois, as a teenager he travelled into the city, digging for records by Smog, Bonnie “Prince” Billy and Tortoise. 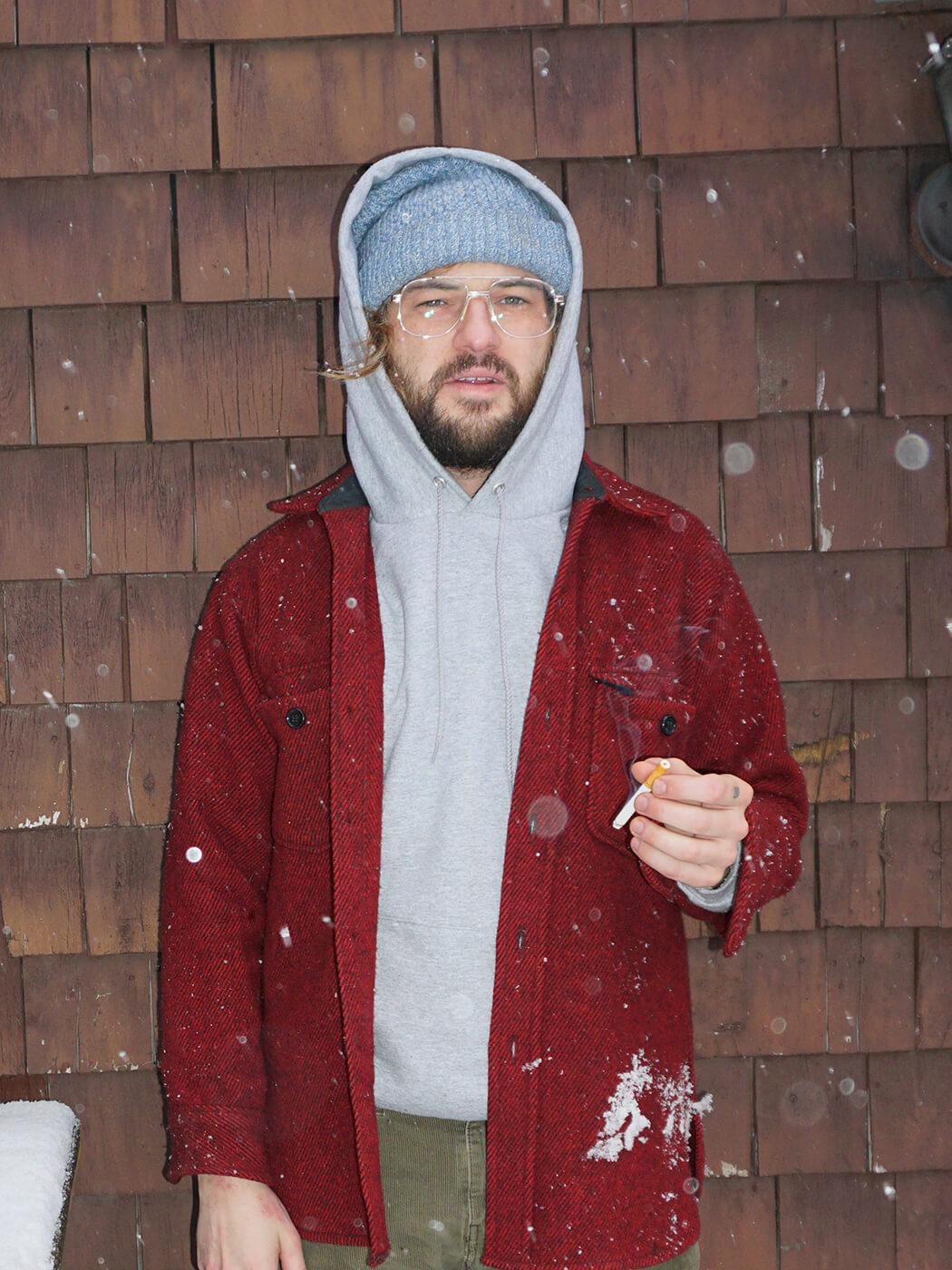 “By the time I was in punk and rock bands in high school, I was a huge Sonic Youth fan, weird tuning gods,” he recalls. “Then I found Robbie Basho and John Fahey records and latched onto those really hard. Freak folk was really big and they all come from punk-rock backgrounds, but were into Fairport Convention, a weird marriage of noise music and British prog, singing about finding a magical mushroom on a mountain surrounded by dragons. From there, I was a fingerpicking maniac.”

Soon, the fingerpicking maniac was befriending the bands he’d idolised and submerging himself in the Windy City’s underground avant-garde scene. For his fifth album, Tortoise mastermind John McEntire was the natural choice as producer, Walker and his band – MacKay, Andrew Scott Young and Ryan Jewell – decamping to Hallowed Hall Studios in Portland, Oregon. Fuelled by the Pacific Northwest’s reputable coffee and regular smoking breaks, they recorded the album in three days.

“John’s a studio whizz,” says Walker. “I love the Stereolab records he’s done, Tortoise, The Sea And Cake. We did all the songs live, but the magic was handing him the keys to mix however he wanted. He added keys and synths and brought everything to the front of the mix in a Steely Dan way. I’ve always hidden my voice behind reverb, even the guitar parts. I’ve never had my right hand shine. Here, it’s all bare, naked and up-front and I really like that. He brought a new confidence in the music.”

While previous sessions had been loose, unscripted affairs, this time everything was written and demoed in advance, meaning the guitarist felt “the least brain dead I’ve felt making a record.” He sounds in a good place mentally, too, exclaiming perhaps in disbelief on Rang Dizzy “Fuck me, I’m alive”.

“I’m used to working in small studios where we’re right on each other’s asses and there’s so much mic bleed,” he says. “It was great to isolate people’s tracks, with John doing surgery, it became this beautiful stew. I plant these seeds, but they’re the farmers who help them grow into beautiful psychedelic plants.”

Walker mainly plays electric guitar on Course In Fable, the vertiginous cycling pattern on opener Striking Down Your Big Premiere introducing an uninhibited exhibition of fusion artistry over seven expansive tracks. Clad With Bunk is astonishing, too – fearless psych adventurism with layered phrases pushing and pulling against each other. His beloved Guild D-35 acoustic, bought for $900 from Old Town School Of Folk Music in Chicago, was reduced to a minor role, with a new pair of electrics his go-to guitars.

“I learnt every style I play now on it,” he says. “I still have it and play it religiously, it’s my favourite guitar of all time. I have a G&L Broadcaster from 1985 that I bought last year. I play fingerstyle with acrylic nails and I’m always looking for an electric that suits that. It’s such a solid guitar, I use so many crazy tunings and it never goes out, and the bridge is this solid piece of metal. 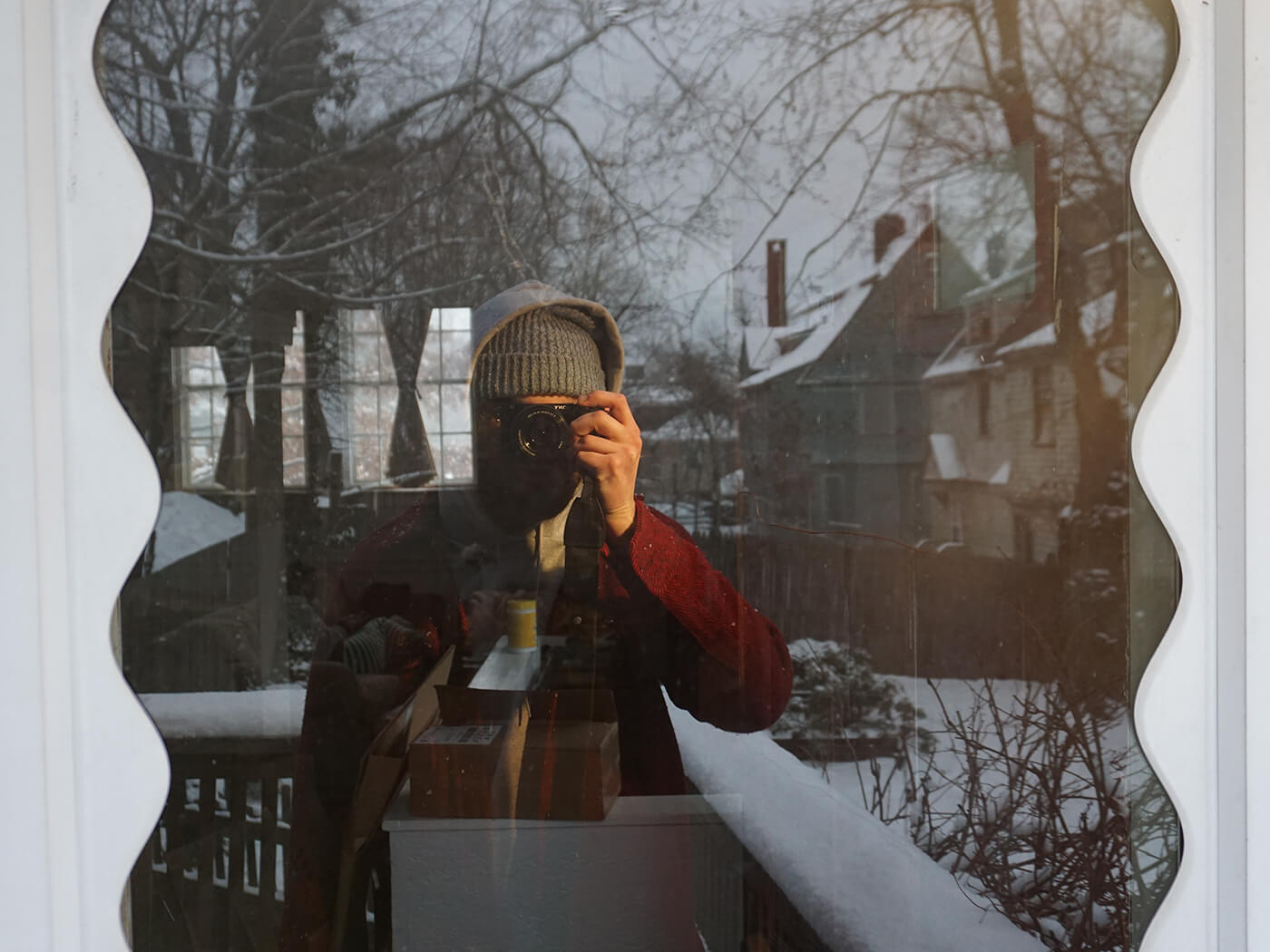 “I also got a 12-string Rickenbacker 360 because I’m such a big XTC fan. English Settlement is my favourite record ever, a studio masterpiece. I went to Hell’s Kitchen in New York and bought the Rickenbacker off this total nutcase. His apartment was full of cigar ash and guitars, I didn’t ask any questions.”

Everything was recorded through Walker’s two-amp setup, a 1950s Gibson GA for the clean channel and an early-70s Fender Vibrolux for the gain, split using a Radial Engineering Shotgun. The clean side was fed through a Greer Amps Lamplighter compressor and everything else into a pedalboard Walker reveals is now “Jonny Greenwood-sized”. There’s even a DigiTech Whammy during the intro to second single Axis Bent.

“That’s something I thought I’d never do, some Tom Morello Bulls On Parade bullshit,” he says. “I was really self-conscious at first, ‘I don’t want people to think I’m trying to sound like Tom Morello’, but I’m not trying to get Reading Festival to jump up and down, it’s just a wonderful tool to make super-out sounds. I’ve always been anti-compressor, but I got chunky as shit with the Greer. The dynamics are amazing, it made night and day difference.”

Course In Fable also sees the continuation of Walker’s studies in alternate tunings.

“They get weirder and weirder,” he says. “I used to just rely on the classics – open C, G, D… but on this I was tuning the E up to an F♯ and the A down to an E, and going with whatever sounds weird from there. I got really into tuning the E to G and leaving the rest in standard, because that’s what a lot of West African guitarists do. That sort of E pick and roll stuff is really fun to play.” 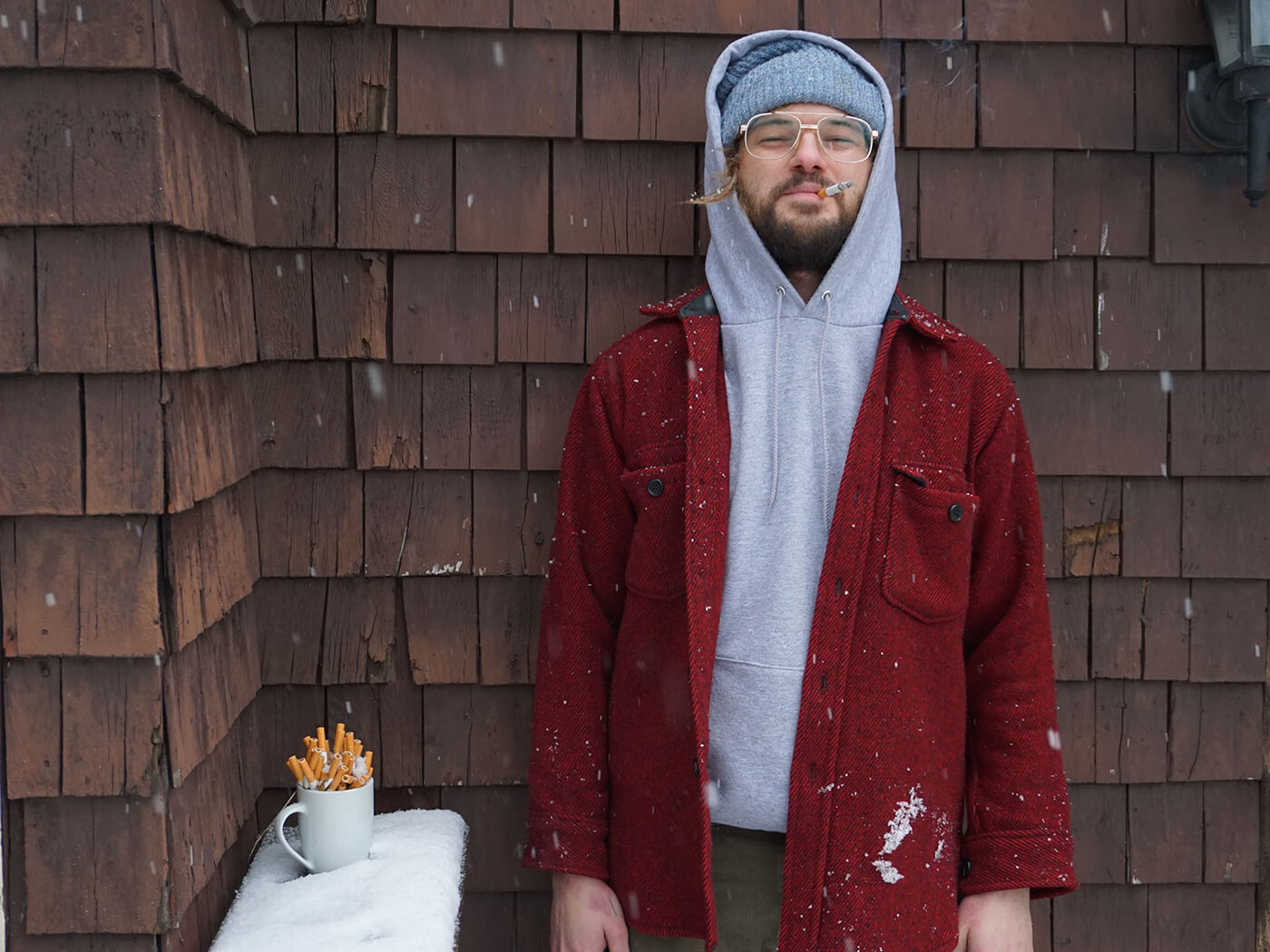 We suggest that the playing on this extraordinary record is deserving of the term virtuosic, but the third thing we learn about Ryley Walker is how self-deprecating he is.

“I feel like I’m good at what I do,” he begins, “but I’m still that fake it ’til you make it person, who should be doing a regular job and got lucky to be able to go on tour and stuff. I’m completely untrained, I’m a fan of records and I try to emulate the people I enjoy.

“I’ve definitely gotten better and more calculated. There’s still guesswork in everything I play, but it’s not just throw something at a wall and see what sticks. I’m finding more joy in playing and my listening to other musicians has gotten better. That’s as big a skillset as learning scales – learning how to listen and when to pause and give way to other people.”

Ryley Walker sounds the happiest and most at ease he ever has. Where next on the cyclical journey that’s carried this wildly idiosyncratic guitarist from Chicago noise rock via pastoral psych-folk and back round to the untamed experimentalism of his home city’s avant-garde? “I’ve always been a big Thurston Moore fan, I love how there are Sonic Youth records and in between there are 50 weird noise records, that’s the trajectory I’ve always admired.

“I’m working on more music with friends. When I don’t have songs, I just make more noise records. I don’t have any plans for touring, I’m looking forward to sitting in silence and when opportunities for music come I’ll take them, but for now I’m pretty patient.”

Course In Fable is out now.