“I hadn’t played loud for a while!”: Scott McKeon on recording a wall of amps and finally playing with a band again

Recorded at Real World and accompanied by an in-depth documentary, McKeon and his band reimagine his recent New Morning record with passion and sincerity. 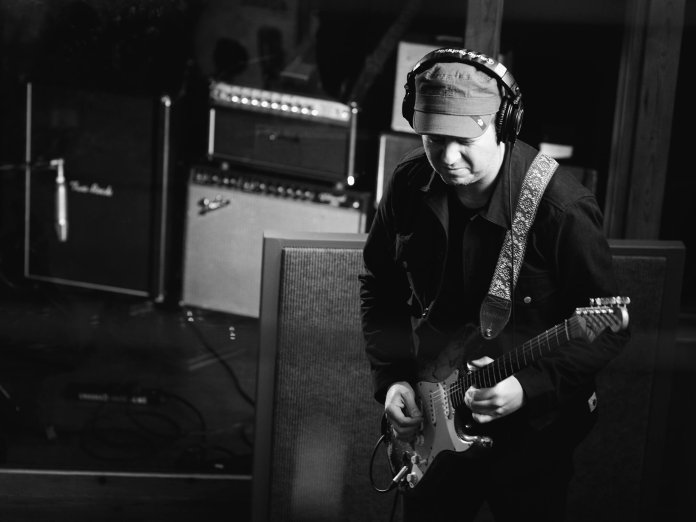 Back in 2021, esteemed guitarist Scott McKeon released his acclaimed LP New Morning, and was so pleased with the result that he, alongside his band, chose to re-record a selection of tracks live to tape at Real World Studios in Wiltshire, owned by none other than Peter Gabriel. “Jeremy Stacey (drums) had recorded quite a lot there with producer Ethan Johns and really loved The Wood Room,” McKeon admits. Decamping to Wiltshire, the band chose to setup in a tight environment to compensate for a lack of gigging time throughout the pandemic, and their intimate environment allowed for bleed from the amplifiers in the drum mics for a full live feel and experience.

McKeon took this unique opportunity to use an excessive number of amplifiers, building himself a small wall in the glass fronted isolation booth found in The Wood Room. “I hadn’t played loud for a while,” he enthuses. “I just got a ‘74 Marshall JMP 50 head so wanted to try that. I was using the Marshall into a 1×12 EVM12L loaded Two-Rock Cab alongside my Two-Rock Classic Reverb, into a 2 x12.” Used in conjunction, McKeon also paired these with his beloved 1950s Gibson GA-5, which he says fills in the crunchy, mid-range sound which sits neatly between the Two-Rock and Marshall.

Pedal-wise he also chose to go the whole hog, using a huge pedalboard which houses his signature germanium SM Fuzz and the SM Octave Fuzz. McKeon says “Those are my main tones, for all the heavy lead stuff. Occasionally I’ll use the Hudson Broadcast for a boost or the Jan Ray. Sometimes all of them together, for really crazy stuff.” Elsewhere there’s a Dawner Prince Pulse for modulation alongside a Jam Pedals Delay Lama, plus a Cali 76 compressor, the perfect companion to clean Strat tones.

McKeon and his band – which includes Rocco Palladino on bass – documented the entire recording process, including in-depth interviews with the band and full live performances, to offer fans unprecedented access to one of the world’s most revered recording studios. Below, McKeon discusses each song and their guitar parts.

“The song starts with a bit of a Scofield/Hendrix-style riff, that’s just my clean sound to begin with, no pedals. Then I use my Vox Wah for the head part with the Jan Ray. As the solo comes in I switch the SM Fuzz on, and use the volume on the guitar to control the amount of saturation of the fuzz. Then introduce the Octave side of the SM Octave Fuzz, then the Pulse Rotary sound. You can get some really crazy, intense sounds combining these pedals, which really affects what I play and where I can take a solo. I like the chaos of not knowing what you’re going to play until it comes out. Just creating as you go, vibing off the bass or the drums. I love building tension in a solo, to the point where you can’t stand it anymore, then release it and explode into the next thing!”

“When we originally cut this for the album, we didn’t have the organ, that was added afterwards. It was killer having Ross Stanley play it live with us in the room. I feel this track is in three sections. The quiet verses, the loud rocky chorus with some Billy Cobham-esque drums, and the big, fast rock riff outro. I’m using my ‘62 Strat on this. Sometimes, when it’s up loud and with the Fuzz pedal on, it can sound a little Les Paul-like on the bridge pickup. I like being able to switch quite quickly between big gnarly rock sounds, to warm cleaner Strat like tones. I was kinda thinking Cream-era Clapton with some of the solos. I also love the Band of Gypsy’s stuff when the guitars and bass play a unison riff. That was the idea of the double time riff at the end.”

“Again, we didn’t cut this with the Hammond of the studio version, so it was great having that in the room with us. I love some of the stuff producer and guitarist Paul Stacey is doing, he’s got a freeze pedal and delay padding out the rhythm stuff, which is such a great bed to play over along with the Hammond. The way Rocco pulls back in certain places gives the track a real pocket and of course with what Jeremy is playing on the drums. Although the song starts quite slow and moody, I wanted to expand on the album version and play out a little more. I love Albert King and Stevie Ray Vaughan and was trying to get a bit of that intensity into the main solo. For the outro I switch on the Pulse rotary pedal. After the intensity of the solo, it feels like a really sweet, melancholic moment.”

“I was using Paul’s Terry Morgan Les Paul replica, which is an absolutely killer Les Paul with OX4 pickups. For me, it has that great vintage, woody Les Paul sound. I don’t often play a Les Paul so it always makes me play a little differently, which although can be a little scary, I like that challenge. The main riff is in Open G and I’m doing a Stones, Black Crowes sorta thing, with the SM Fuzz coming in for the main riff and occasionally turning on the Pulse. For the solo I had to retune, although kept the Drop D.”

“I’m using the Les Paul on this. This track has got a swampy desert vibe, in my head a bit like early ZZ Top. I like the intensity growing throughout the song, with Gavin Conder (Vocals) building it. He’s like a modern-day Paul Rogers! For the solo I was thinking a little Paul Kossoff, probably because of the Les Paul and Marshall. I love his vibrato. I was also thinking of Buddy Guy, I love the way he can be really intense and almost crazy in some of his solos. The album version is maybe a touch more restrained, so it was nice to expand on it, and just see where we could take it in the moment. Paul Stacey takes the solo at the end and is doing some really cool harmonic stuff. I was also using the Strymon Flint for a little tremolo.”