The G&L-toting guitarist on the awkward experience of confronting her early riffs, ditching effects pedals, and keeping her options open.

During the video for Screaming Females’ Hopeless, Marissa Paternoster stares the viewer down as animated figures pop and whirr across the frame. We cut: she strums brittle chords before tumbling into the song’s crushing ending, her pickguard splattered with blood.

The image says so much about Paternoster as a guitarist and songwriter, relating the brutal beauty of her work and the effort it takes to realise it. A demo of Hopeless – one of several singles from 2015 album Rose Mountain – stars on Singles Too, their new B-sides and rarities compilation. Even when stripped back to its acoustic core, its melody still hits hard. There’s no claret this time, but its power is undiminished.

A classic power-trio fleshed out by bassist Mike Abbate and drummer Jarrett Dougherty, the New Jersey band have been slinging ferocious DIY indie-punk for almost 15 years. Singles Too is an alternate history; packed with early work, covers and weird asides to fill in the gaps between their rapidly evolving studio work and face-rearranging live shows.

“It reflects our growth – over the years, we’ve become more conscious of writing good songs and not needlessly noodling away,” Paternoster says. “In our earlier days, we wanted to go wild and put in as many parts as we could, solo as much as we could, play as many notes as we could. As we’ve grown older, it’s like, ‘Maybe those extra notes are doing the song a disservice and we should chill.’

“I’ve become a lot more conscious of trying to write really strong melodies and lyrics that resonate more universally for people from all walks of life. Those are things I think we’ve been thinking about from album to album throughout our life as a band.”

Singles Too begins its journey in 2006 with Arm Over Arm and Zoo Of Death from Screaming Females’ first 7-inch. The songs do everything you might expect them to do: they’re hooky shred-fests underpinned by a watertight rhythm section. Not that Paternoster wants to listen to them regularly. “I think, as a guitar player, I try to avoid listening to those songs because the mistakes I made overshadow everything else in my mind,” she says.

Studio-wise, these early thrashings exist in the shade of later work, like their monster cover of Patti Smith Group’s Because The Night, which was recorded with alt-rock giants Garbage at plush East West in LA. Screaming Females happily started out in a tin hut called The Hunt, where Paternoster interned during her college years at Rutgers.

“It’s a patio-furniture store now,” she says. “It’s on the side of the highway in central New Jersey, which is a pretty rural area. There’s a lot of farmland, but there’s also a lot of strip malls that have Dunkin’ Donuts and Panera Bread. It’s kind of like a wasteland. There’s nothing to do.

“I had just started playing in Screaming Females, so bands I befriended could come and do a couple tracks for free as a learning experience for me. We had a really good time hanging out and making records in this super-weird shack. Two of the other interns tried growing weed inside a Marshall cab with a grow lamp, but didn‘t tell Eric [Bennett, owner] and I about it. We thought the amp was haunted.”

I predict a riot

Paternoster picked up a guitar in her early teens, learning Nirvana songs and delving into the dense web spun by Smashing Pumpkins’ first records before getting into punk and riot grrrl. As the formative cuts on Singles Too show, she quickly came to prize leads that serve the song over flashy pyrotechnics. “I was like, ‘Well, I don’t need to play guitar solos to be good enough to be in a band.’ Those two worlds kind of got smooshed together in my adolescent mind,” she says.

Paternoster’s gear choices reflect that approach, prioritising familiarity and adaptability over sprawling pedal boards and rack upon rack of guitars. “I used to have a lot of different modulation effects, cool squishy sounds that made it sound like you’re in outer space or whatever,” she says. 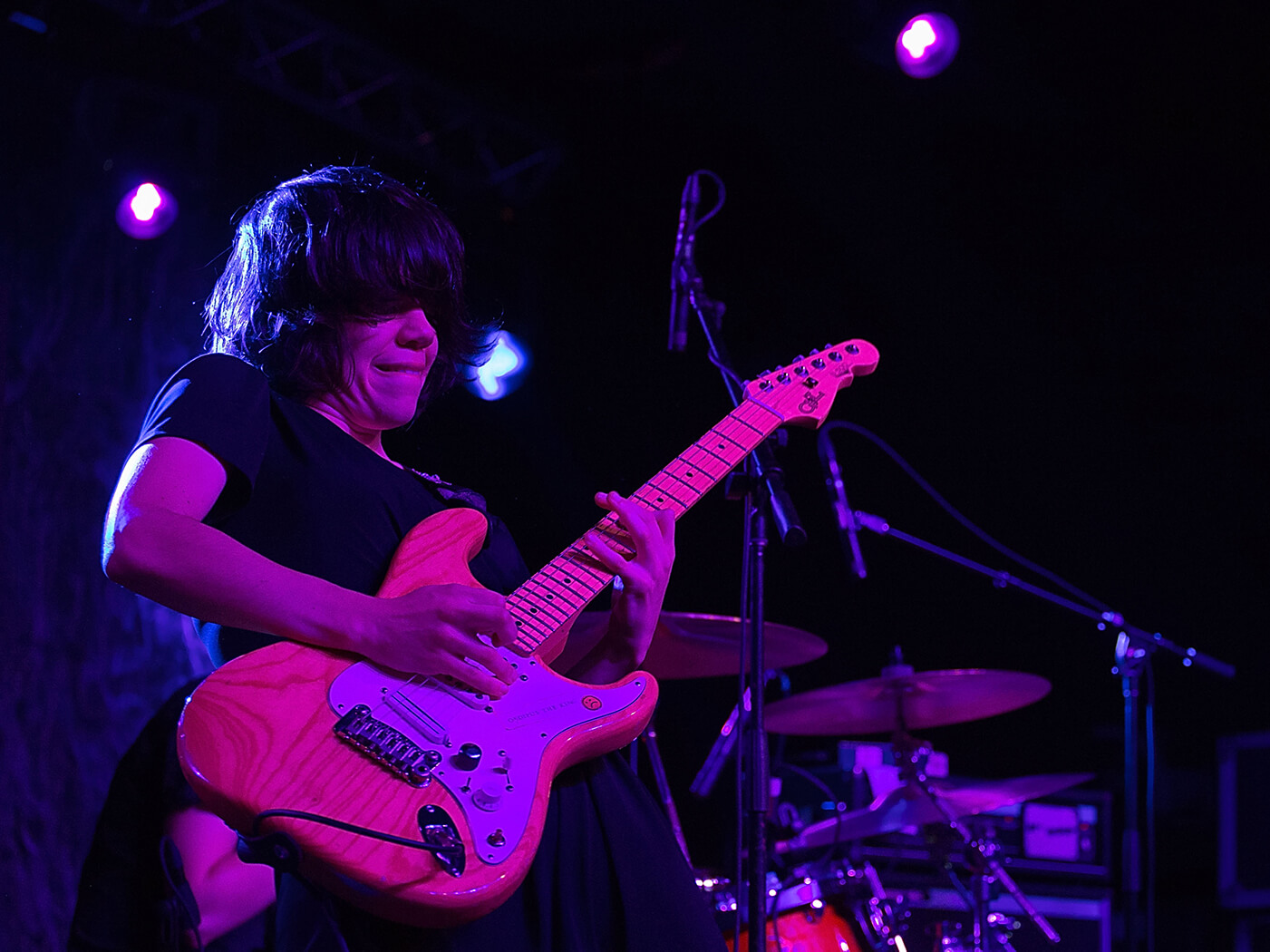 “I got rid of all of them because they weren’t conducive to our songs. They weren’t serving our band. So now it’s just gain staging and a delay pedal and that’s pretty much it. I have cool pedals that have been useful for recording, but live, I’m looking for maximum efficiency and what sounds best.”

Paternoster has played G&L S-500s for years – one stock and the other kitted out with Seymour Duncan Hot Rails – with a Telecaster muscling in during studio time and these days, she favours a monster Sunn Concert Lead head and 212LH cab. It’s loud. Really loud.

“When we first started, and for the first decade of us being a band, Mike and I had small amps,” Paternoster says. “I had a Hughes & Kettner 40-watt. It was pretty loud, but it was suitable for the places we were playing. We started playing bigger venues, Mike got a bigger amp and then I graduated to a bigger amp, too, because that made sense.

Paternoster is one of the most exciting guitarists in rock – a coiled spring of fuzzed-out melodies and searing solos. With Abbate and Dougherty, she has turned Screaming Females into a fearsome proposition: tight, egalitarian and, not sure if this has come up elsewhere, loud. “I have 33.3 per cent control over how the band sounds and that’s how I want it,” she says. “I don’t want to be in charge. I don’t want to have authority over anybody. I want to be in a really good rock ’n’ roll band that also has two of my best friends in it.”

Screaming Females’ Singles Too is out on 18 October through Don Giovanni.