The 17-year-old guitarist on performing with her role models and being a young idol to upcoming rockstars.

It’s not often a 17-year-old has their career mapped out in front of them, with dreams blossoming into reality by the day, but rocker Sierra Levesque is one exception.

When many people her age are struggling to find their course in life, Sierra’s teenage years have become one big stepping stone into professionalism, who’s been a performer since she was three. She began on stage as a theatre kid, but soon stumbled behind the curtain when she fell in love with song-writing and rock ’n’ roll.

Unlike many her age, she’s managed to juggle growing up with becoming a self-proclaimed musician, undertaking vocal, piano, guitar, bass and drum lessons over the past decade. Now, she plays on stage with the likes of Heart’s Nancy Wilson. 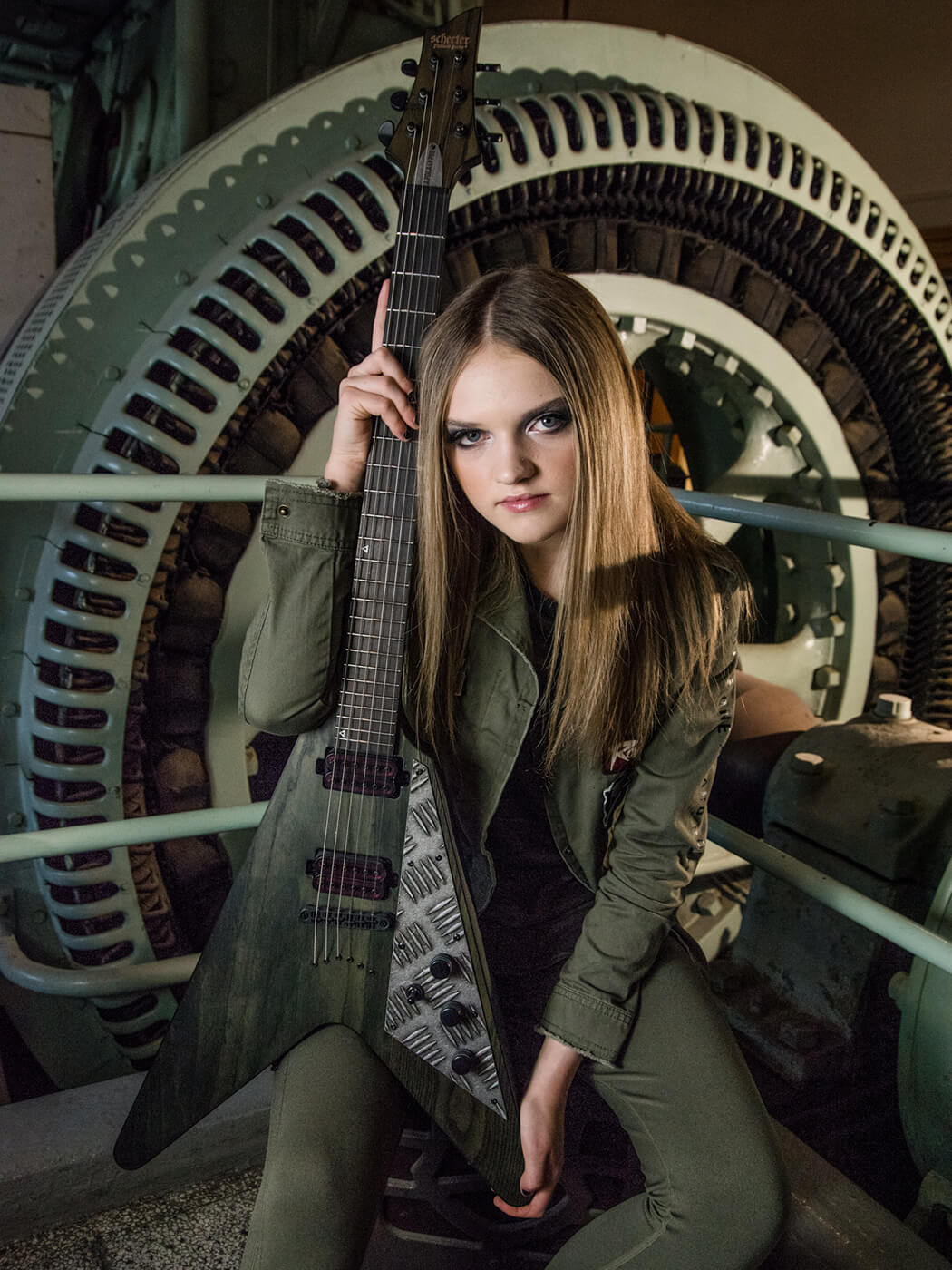 Why did you decide to leave theatre and become a guitarist?

“I began performing in local musical theatre productions as a kid. I was in a lot of shows like Aladdin, Shrek, Annie, Mary Poppins and things like that – so that’s how I began on the stage. And then around the age of seven, I started taking singing lessons and piano lessons, and I also started song-writing.”

“At that age, I thought, you know what? I’m not going to do musical theatre as much and I’m going to focus more on rock music.”

“From there I started learning other instruments – roughly from about 10 I started drums, guitar at 12 and then bass at 13.”

“Ever since I was younger, I used to fall asleep in the car listening to Black Sabbath and Guns N’ Roses and bands like that with my dad. So rock music had always been in my life.”

“And whenever I was presented with the question of, ‘Okay, do you want to learn another instrument or do you want to continue musical theatre?’ I looked at the people who I looked up to the most – so Axl Rose from Guns N’ Roses or Avril Lavigne – and I thought, you know what, I’m going to be like them.” 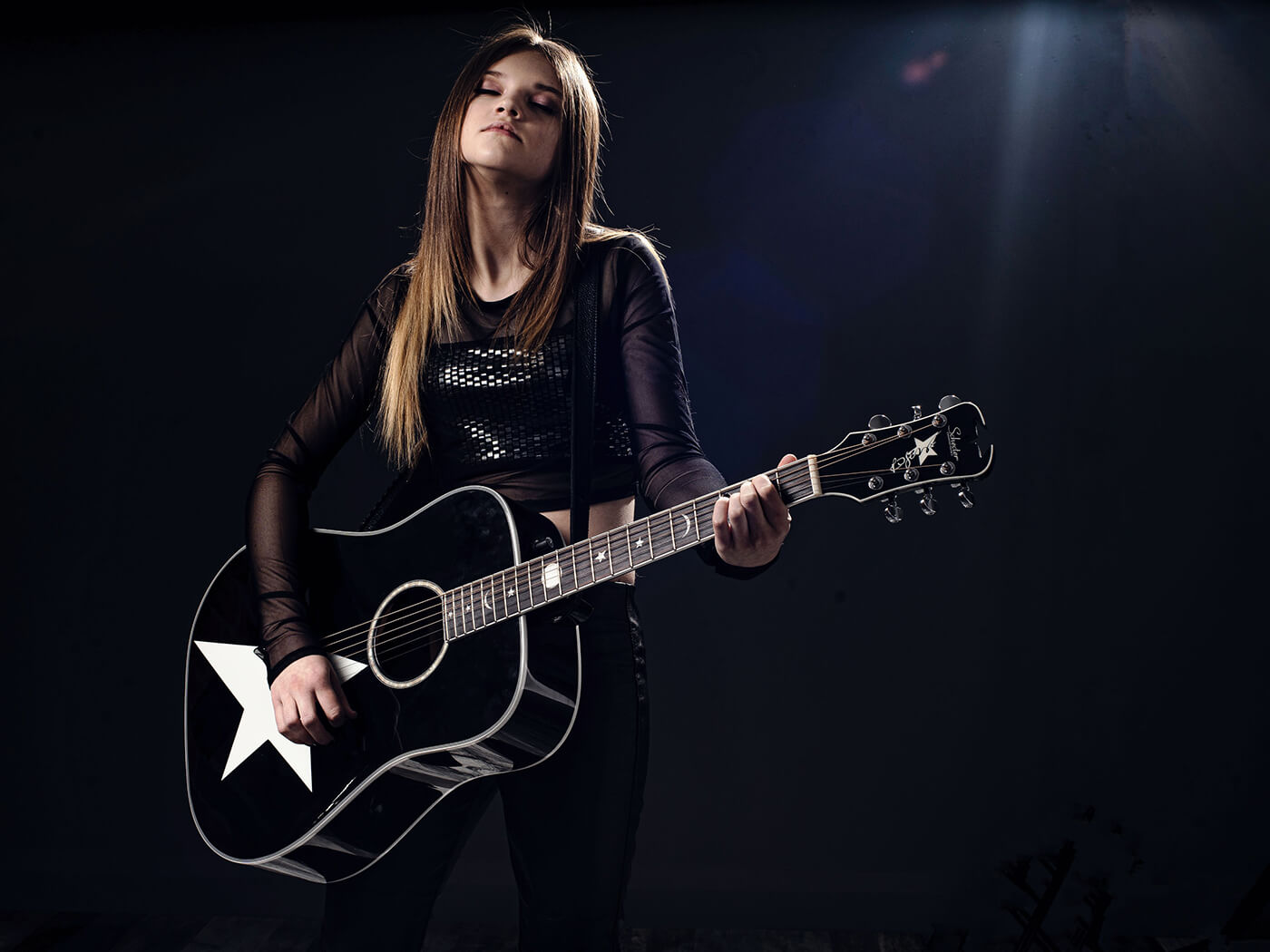 Tell us more about your performances and the music you make

“I pretty much take any performance opportunity I can get. Even if it’s paid or not paid, it doesn’t matter to me. That’s really what started getting my name out there.”

“In May, I had the amazing experience of travelling to Los Angeles as part of the Rock N Roll Fantasy Club, where musicians get to meet and perform with rockstars.”

“I got to perform with Nancy Wilson, Melissa Etheridge, Orianthi and Kathy Valentine of the Go Gos.”

“Nancy Wilson specifically has always been a huge inspiration of mine, both with her solo music and her work with Heart. So, when I got the chance to perform Crazy On You and Barracuda on stage with her, it was really a dream come true. She was so kind and she told me that I remind her of herself, which is a very flattering statement.”

“As for music, I’d say my stuff has developed into a cool mixture of rock and a few other genres as well, but mainly rock.”

“One of the things I dabble in is pop rock, because some of my songs are quite catchy and not as heavy as some hard rock that I listen to. And I also really love just writing songs that have a lot of relatable themes in them – so a few of them are about being an outsider or feeling lonely, which are things that have helped to relate to audiences that I’ve sung them for.”

How do you approach writing new songs?

“Usually when I’m recording or writing a song, I start with guitar. Piano can also be the first instrument, but it’s mostly guitar. And then from there I start singing and building lyrics, and I always like to add my own drums, electric guitar or other heavy things throughout. But I always keep that catchy theme to capture the audience.” 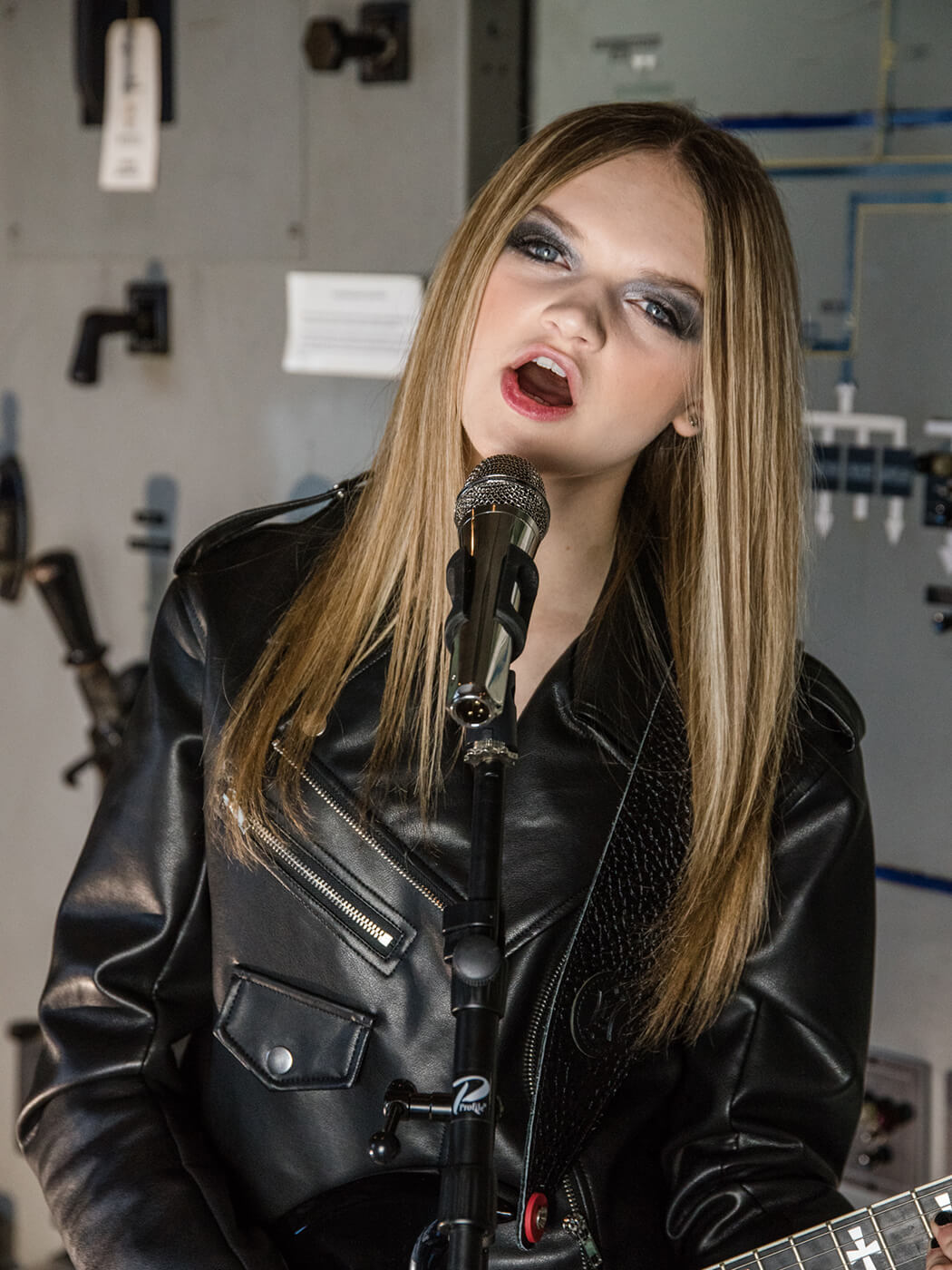 Talk to us about gear…

“I’ve been really lucky to be able to have a lot of guitars and receive a lot for my birthdays and Christmases growing up. My favourite electrics to use right now are the ESP Eclipse models. I also love Epiphone. My first guitar ever was actually the white Flying V – that was my staple moment in rock ’n’ roll and where I started.”

“But I’ve been really lucky to also partner with Fender – they sent me my Acoustasonic, which has been one of my favourite acoustics to use on any stage, which has been great.”

“I also really enjoy using my other acoustic which is from a brand called RainSong – that one is fully carbon fibre. The good thing about that is that where I live – in Canada – the temperature fluctuates from very freezing cold in the winter, to burning hot in the summer. Carbon fibre guitars don’t get affected by the temperature, so you don’t have to worry about the neck bending or anything like that.”

“For accessories, I’ve been really lucky to use Ernie Ball. They’ve provided me with a lot of great guitar picks and straps – everything that I could ever want.”

“For cases, I’ve partnered with Gator which is a smaller brand, but really great nonetheless. And as for amps, I always use Fender Mustang models.” 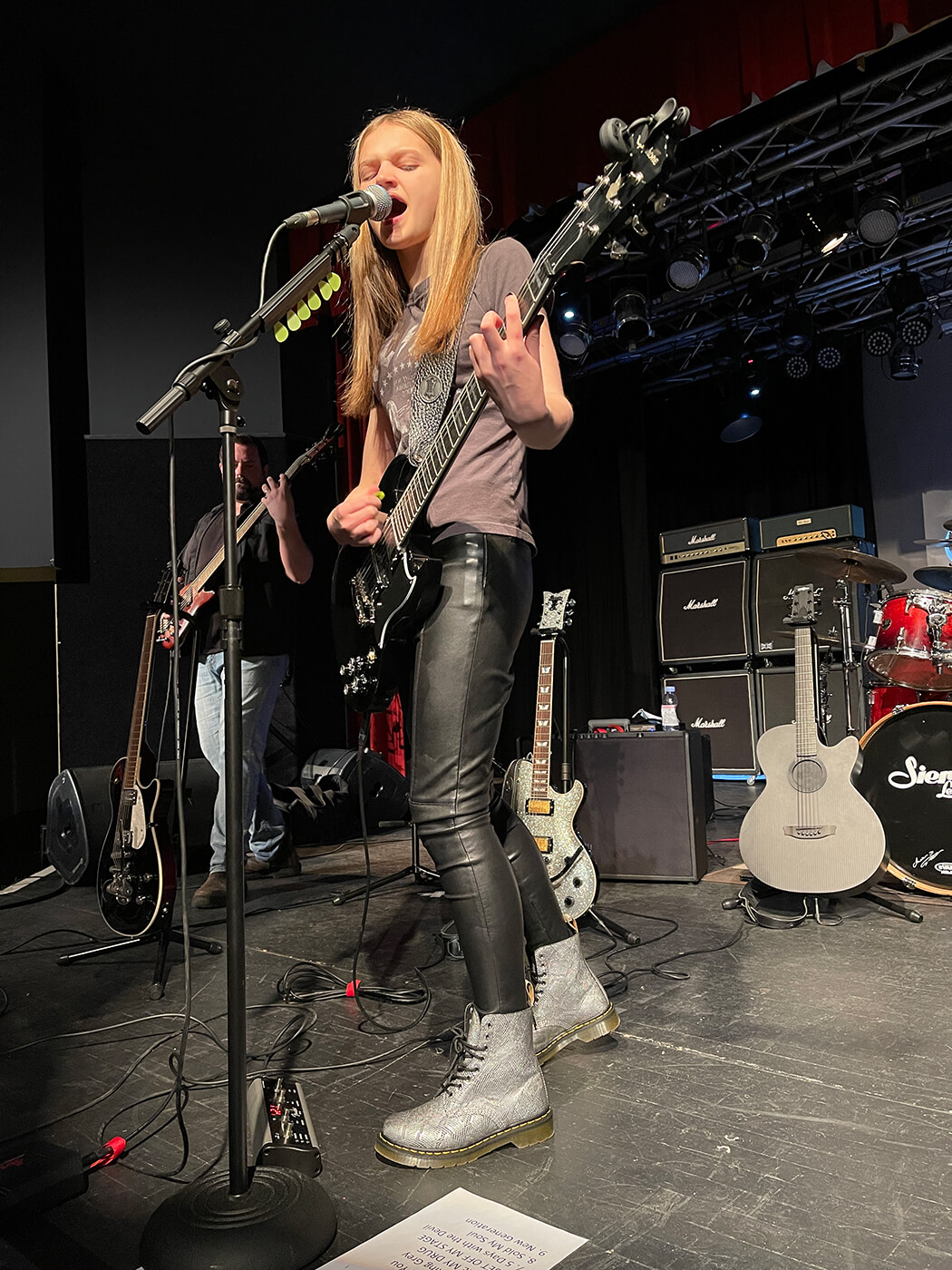 What’s it like finding your feet in the industry this young, and what advice would you give to others doing the same?

“For anyone young in general, I always say that the best thing for me to do is perform anywhere that I get the chance to. That’s whether it’s a retirement home, a school talent show, or even a sidewalk somewhere.”

“Some people don’t think there are as many performance opportunities, so in that case I would say that to learn as many different kinds of music as you can. When I started out, I didn’t just learn one band or one artist – I started out by learning a lot of different songs and different challenge levels too.”

“The first song I ever learned was Sweet Child ‘O Mine by Guns N’ Roses. I told my guitar teacher that on the first day, and he looked at me and said, ‘Well, that’s definitely going to be an interesting one.’ I basically wanted to learn the electric part, not just the chords. So it was definitely a challenge. But it’s really important to broaden your styles and to broaden your skills as well.”

“And for advice to young girls like me, I would say that living in a small town like I do, there are times where people say, ‘Oh, just a little girl,’ because they see you as that. Even if you’re older. And that’s fine when you’re younger, but when you’re starting to have a bigger voice and wanting to show that you’re a rocker, it is difficult.”

“So I try and get up and perform with other people as much as possible. A lot of the time it has been with older men, and for some reason that’s helped me a lot. As I say, I’m in a small town, and the small venues here have open mics.”

“So, whenever there are these 40 or 50-year-old musicians there who have been playing for years, they think I’m just a little girl who’s going to play Taylor Swift. But when I ask to play ZZ Top or Ozzy Osbourne, they definitely have a bit of a shock. So, it’s so important to prove to other people that you can do it – prove to them that you do know the music they know and you can rock just as hard as they can.” 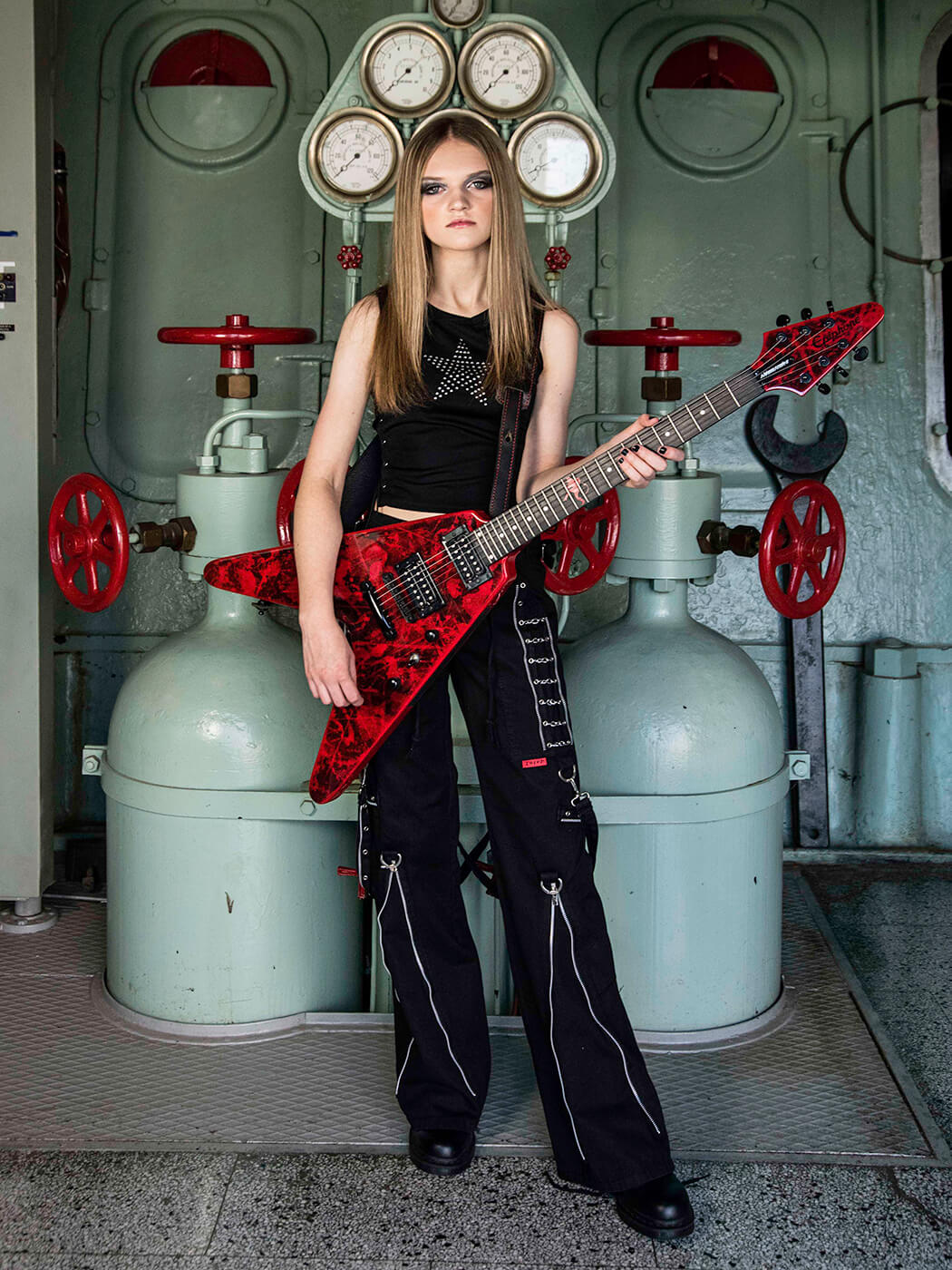 What are you aiming to do next in your career?

“Right now, I’m working on recording all my own songs. I record all the instruments – the drums, bass – and then I mix them with my guitar teacher here at my house.”

“My guitar teacher’s name is Ron “Bumblefoot” Thal – he’s been very helpful and he used to be in Guns N’ Roses – he’s currently in Sons of Apollo – so he’s been a great mentor to me.”

“The goal is to hopefully put them together and prepare to release them one day, and also to market myself to possible record labels just to show everything I can do. You know, I can record, I can perform live, everything like that.”

“I’m hoping to continue doing bigger performances – I have a few great ones coming up around Canada where I’m opening for 80s rock bands and people like John Corabi who used to sing for Mötley Crüe. So, I’m getting slightly larger gigs every day, it feels like.”

“I’m just trying to put myself out there for new audiences. And I would say the main goal – with all of this, everything that I’m doing – is to lead the new generation of rock ’n’ roll. To show rock isn’t dead, it’s not turning into some kind of screaming music or new kind of rap, it’s truly alive.”

“There are people like me out here, writing songs and playing my guitar and just bringing it back to its roots. I’m keeping it alive.”