It’s somewhat paradoxical that such electric music as Sister Wives’ is great at making you feel like you’ve planted your feet on the mossy earth and let in feelings from thousands of years past – but, things like that are never simple.

And neither is succinctly describing Sister Wives’ sound: a single genre descriptor does the band a disservice, as there’s a lot more going on here than just a tribute to 70s acid-folk acts or another spin on occult rock. And their debut record Y Gawres does explore Welsh and English mythology – but don’t mistake the record for one solely placed in prehistory. There are tracks that deal with definitively modern issues, and the album charts a course from tradition to modernity: old folk standards are mixed in with driving drums and bass, and jagged, post-punk-inspired guitar.

We spoke to guitarist Liv Willars and Rose Love about the band’s unique, intriguing sound.

How did you start the band?

“We had a couple of practices just me and her, but it just felt like the sound needed a lot more. Donna was friends with Rose, so she brought her in on bass and I was friends with Lisa, who plays drums. And it all kind of came from there.

“We’ve never said anything like, ‘we want to be a band that sounds like this, this is our main influence’ – we all like a real mixture of music, so it’s kind of, put it all together and see what we kind of come up with.

“We made a conscious decision not to have one person fronting because I think a lot of the bands we were drawn towards are sort of ‘collectives’ – each individual is interesting, bringing something in, rather than it just being a single person playing with a backing band.”

What inspired the strong presence of Welsh folklore in the music?

Rose: “A lot of it, obviously, is Welsh, but there’s a bit of English folklore in there as well. It came from Donna, she’s from Anglesey, her first language is Welsh. She’s a massive fan of ancient sites, Welsh folklore and tales – and really gets a lot from that, and wanted to bring that mystery into the music, just sing about those things because she loves them so much.”

Liv: “I think it came about with Crags, a single we did before the album. That was about the witches’ marks found in Creswell Crags. Writing that was one of the early conversations that we had about us straying into folklore and history, and especially looking at roles of women in that context. Which would then be linked to the witchiness of the sound… we’re not saying that we’re witches [laughs]. I found it really interesting, and then those conversations then led to a lot of the topics of the album.”

Rose: “Me and Donna particularly, but the others too somewhat, we’re dead into folk – I used to play the banjo, we’ve been around folk scenes, and really like things like Steeleye Span, Pentangle, Fairport Convention, all that kind of late 60s, early 70s stuff. That’s all an influence, as well as British folk traditionals – like, on this album we’ve got Hares On The Mountain. So there is that psyche-folk earthiness – but it’s also just from folk music.”

Do you feel like part of the occult-rock-revival that’s been happening over the last few years?

Rose: “I mean, I love Coven and all that freaky Amon Düül stuff. So it’s not a mistake that we’ve done that. And just the other early 70s stuff that’s fronted by, not men, basically. We all like a bit of that, some of us more than others. But I’m not sure we’re part of that revival. Like, I don’t feel like Desertfest would want us – we’re not heavy enough, I guess. But we have elements of it, in some songs more than others. And I feel like we could go heavier. Crags was definitely a bit more like that. We strayed away a bit, but I think we’ll definitely come back at some point.”

How do you play your guitar and bass parts off each other?

Liv: “Thinking about where it comes from and how we write in that style, a lot of the album tracks were originally written during lockdown. I had a newborn so I was wary about going out to places, so Donna, Rose and Lisa were all coming up with ideas in the rehearsal room and then messaging them to me.

“Part of it was also, I was trying to bounce off Rose’s riffs but not take over too much of the song. There’s a lot going on, but we don’t want it to be too overwhelming – we want that immersive quality. With my lines, I didn’t want to overshadow Rose’s amazing chugging, interesting basslines. So I’d try and pick sounds over the top that were maybe quite repetitive, and would kind of cut through it all, but wouldn’t be trying to steal the show.”

Rose: “Yeah, I feel like that’s what you do. It’s almost like we kind of do our own thing, as long as it, in our head, sounds right. And then we often try and come together for a bit of relief, or a bit of clarity, within the song – on a chorus and so on.”

Tell me about your respective rigs.

Rose: “I play an old 1976 Fender Musicmaster bass, in cream – I call it the ‘Creamy Beast’. I just really love a warm gritty, dirty sound. I don’t like things to sound too clean, so I use an Orange Terror 500 watt head, and everything goes through this half-broken overdrive pedal made by Cog Effects, who’s a maker here in Sheffield. It’s some prototype that I’ve inherited from somewhere. So lots of overdrive – and at the moment using some old 2×15, it used to be The Vaccines’ cab. I don’t even know what brand it is. I’m gonna get something smaller, though, because it’s just stupid…

“In terms of other pedals, I’ve got a bass octave pedal just to get even lower and weirder, then a Small Stone phaser pedal. But for the drive, I keep it quite trebly because my basslines are quite busy. I always push the top end a bit whilst trying to keep that kind of stoner grit.”

Liv: “I love post punk and that kind of thing. Often I try to pull the sound back a little bit, so it isn’t this giant, to make space and hear each individual melody. But I do like it kind of the same as Rose, really – as muddy and overdriven and loud as possible. With us two it is a bit of a balancing act – if one of us is sort of doing more of a lead line the other will sit back a bit, and maybe tone down the sound slightly.

“I play a Mexican-made Sunburst Fender Jaguar into a Green Russian Big Muff, which I think it’s from the 90s – it constantly breaks but I really love it. That’s what’s used on most songs to get that big heavy sound. I have a Crowther Audio Hotcake as well, which again is on most songs. It’s a great pairing with the Big Muff. And there’s also an MXR carbon copy, which we use on songs like Another Day and Wandering Along. That just gives a slight chorus, without me having to have tons of pedals. Those are my three trusty ones, which I pretty much use all the time.

“Amp-wise, I’ve got a Kelly head, which is essentially a Selmer with a different badge on it – made by John Kelly, who used to work for Salmer, and then went off and started his own business. I’ve never actually seen another one in the wild. It’s super simple to use, but just has this mega sound – really growly, but easy to control, which is helpful when everything’s happening live. And then my cab is a custom one, made by someone that my husband knew. We did a gear swap with him, and he gave us a cab each, so I don’t even know if he’s still making them anymore. It’s a 2×12 with Celestion Vintage 30s – so it’s sort of similar to Rose’s sound – we both go for that warm but growling thing.” 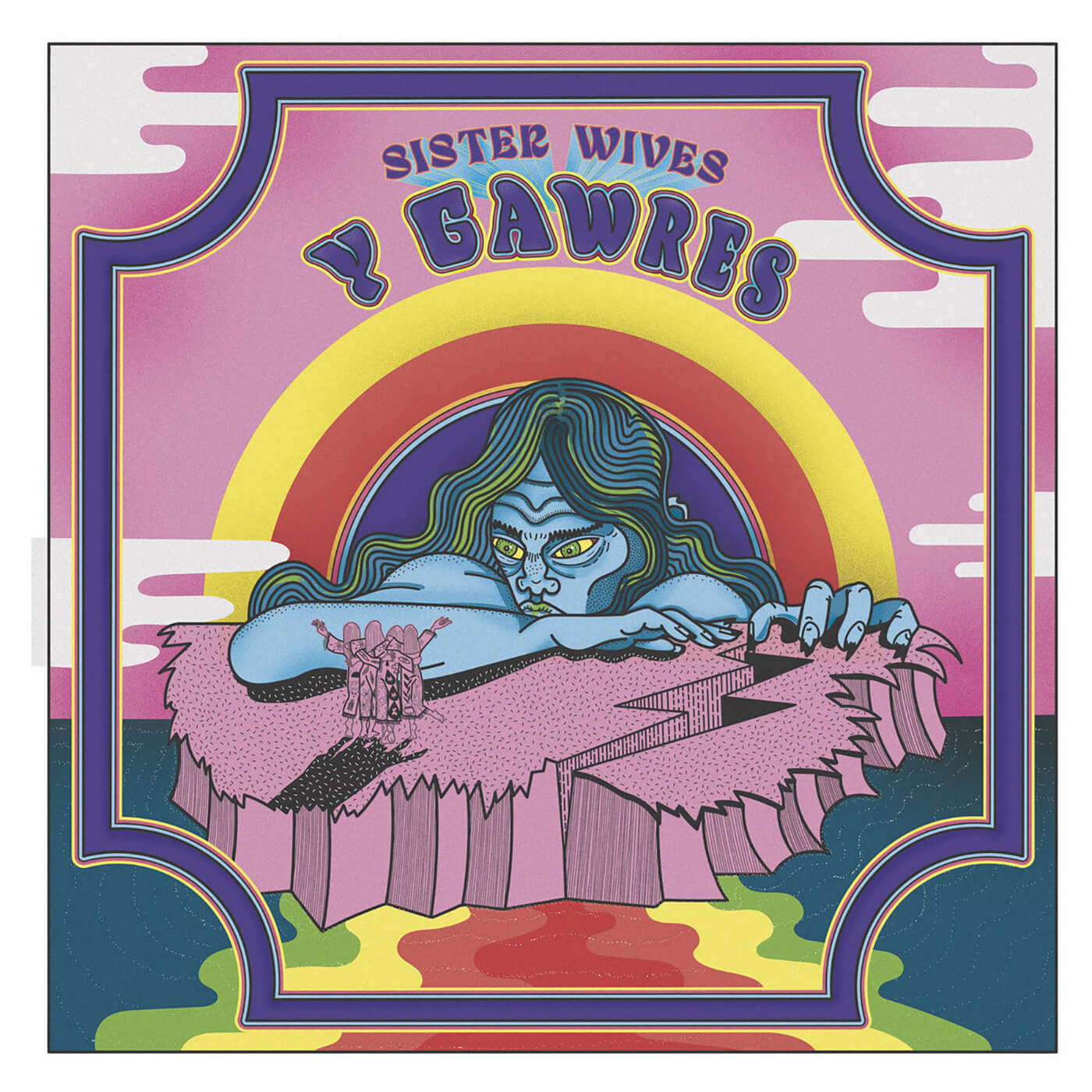 Liv: “We definitely like to play around with loud-and-quiet. Just thinking of Streets At Night, that’s about feeling scared as you’re walking home as a vulnerable person at night. There’s an area where it kind of builds up, and then it stops and slows down a lot, and goes a lot softer, meant to mimic your heartbeat – you turn a corner, you think you’ve lost someone, you feel a bit more relaxed, and then it goes back up again. And we tried to mimic that a bit with the volume of things. And at the end, it builds back up into a huge scream.

“The band, for us, is definitely a cathartic thing. Being able to get in that room and make a lot of noise was really important for us all.”

Rose: “We have been told that we sound kind of primal before. I’m not sure that’s very intentional. That’s just what naturally happens!”

Y Gawres is out now.