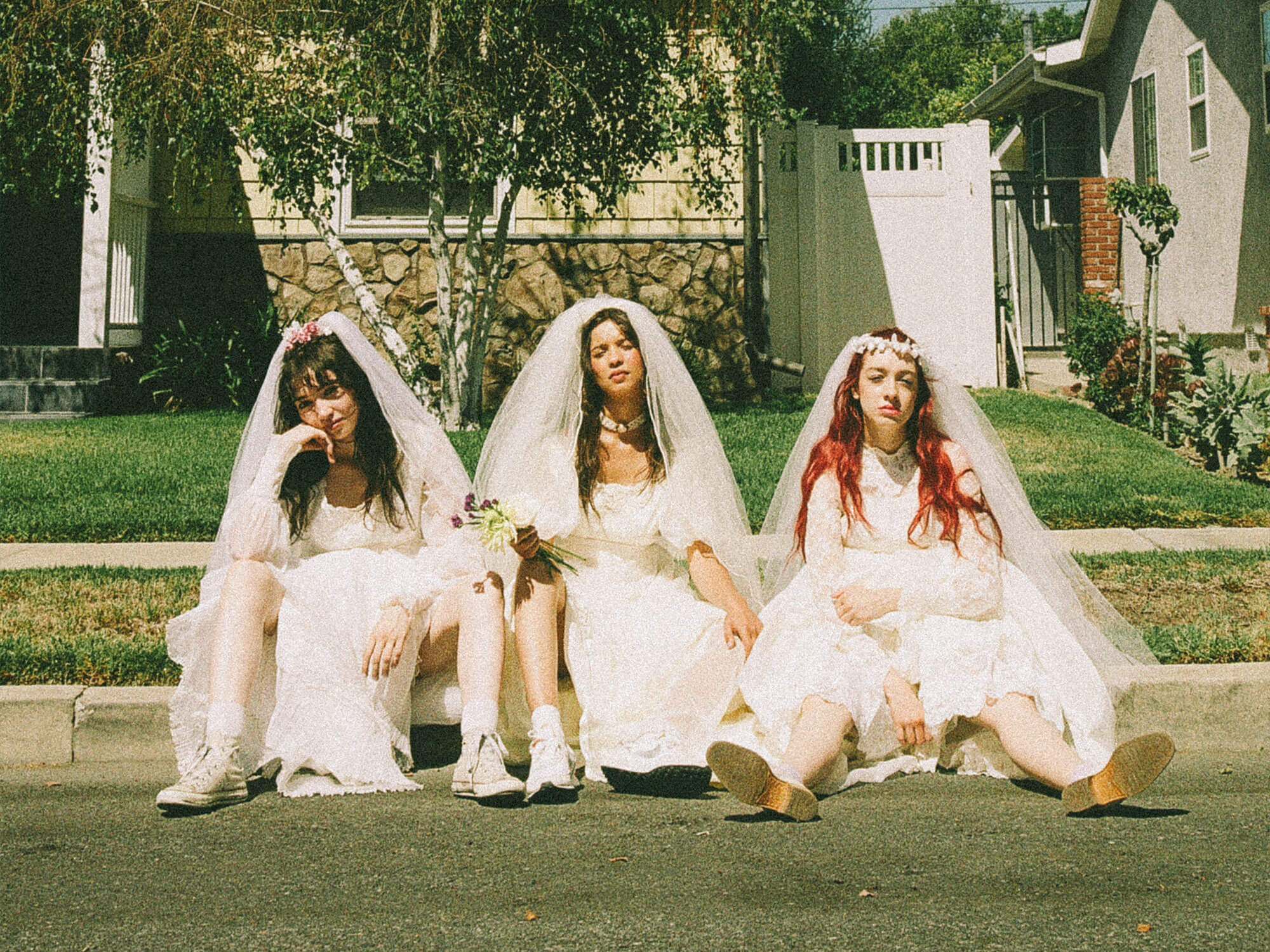 We chat to Anastasia, Eva and Emily and ask – what is a Tchotchke?

The best bands create whole worlds – full fictions that every aspect of their music holds up. With Tchotchke’s music the world is a nostalgic one – their tightly-written melodies and harmonies evoke vintage power-pop, and their grainy music videos paint a surreal, primary-coloured vintage alternate universe.

But like all nostalgia, the time it evokes doesn’t really exist, and is instead a stew of the trio’s formative influences. Tchotchke tracks recall the art-rock of Fiona Apple as much as they do retro power-pop and indie rock. Regardless, they’re all also ridiculously catchy, guaranteed to be stuck in your head for days.

The band – Anastasia, Eva and Emily on drums/lead vocals, bass and guitar respectively – are currently on a roll. Their excellent debut record came out in the summer – and has since been picked up by Org Music for a vinyl pressing. They’ve also just wrapped up a tour with the Paranoyds. We caught up with them to see how things are going.

(The word ‘tchotchke,’ by the way, means a small decorative trinket – think porcelain statues, novelty mugs and the like.)

What’s the meaning behind the name Tchotchke?

Anastasia: We like tchotchkes and have collections that are constantly growing. Emily is more of a minimalist, which has been healing to our hoarding tendencies.

Tell us about the history of the band. How did you end up playing music together?

Anastasia: Eva and I met in high school and started playing music together back in 2014. We met Emily in 2019 while looking for a new guitarist to play with, and quickly became musical soulmates.

Eva: I was very inspired by the Go-Go’s while I was learning to play. My sisters and I used to have a band when we were kids (I was on keys) and did a lot of covers. One time we got to play Head over Heels to Kathy Valentine over the phone. A few years later, we performed that song at my sister’s middle school not realising that Charlotte Caffey was a parent in the audience.

They definitely influenced my preference of having a strong, all-female lineup. After our childhood band fizzled out, I stole my sister’s bass and taught myself how to play using the piano and by studying her visual fretboard booklet. I still like to write a lot of my bass lines on the piano. When I was 15, I saw the Wrecking Crew documentary which turned me on to Carol Kaye. She definitely inspired me to write more melodic bass lines (and to always play sober). Hopefully she starts teaching online lessons again – because I was too nervous to take one back then.

Emily: My main influences when I started playing guitar were much inspired by the music my dad showed me when I was little; he’s a drummer and an avid fan of blues and classic rock. The 2004 Crossroads Guitar Festival in Dallas was my first concert experience and a formative event I’m grateful to have had at an early age. Hearing Santana, BB King, and ZZ Top live sparked an interest and learning to play became what interested me more than anything else.

The interest never went away and luckily still hasn’t! Angus Young also made me enthusiastic about guitar early on. Learning his solos and listening to his playing has been a consistent source of inspiration. When we all started playing together, our individual influences and styles felt complementary to each other. Having the space to improvise a little blues and bring what I could offer to what the girls had in place felt like a rare and intriguing fit.

Anastasia: I started out with my dad teaching me how to play Black Sabbath on the drums. He would duct tape the drumsticks to my hands and show me how to do simple beats. 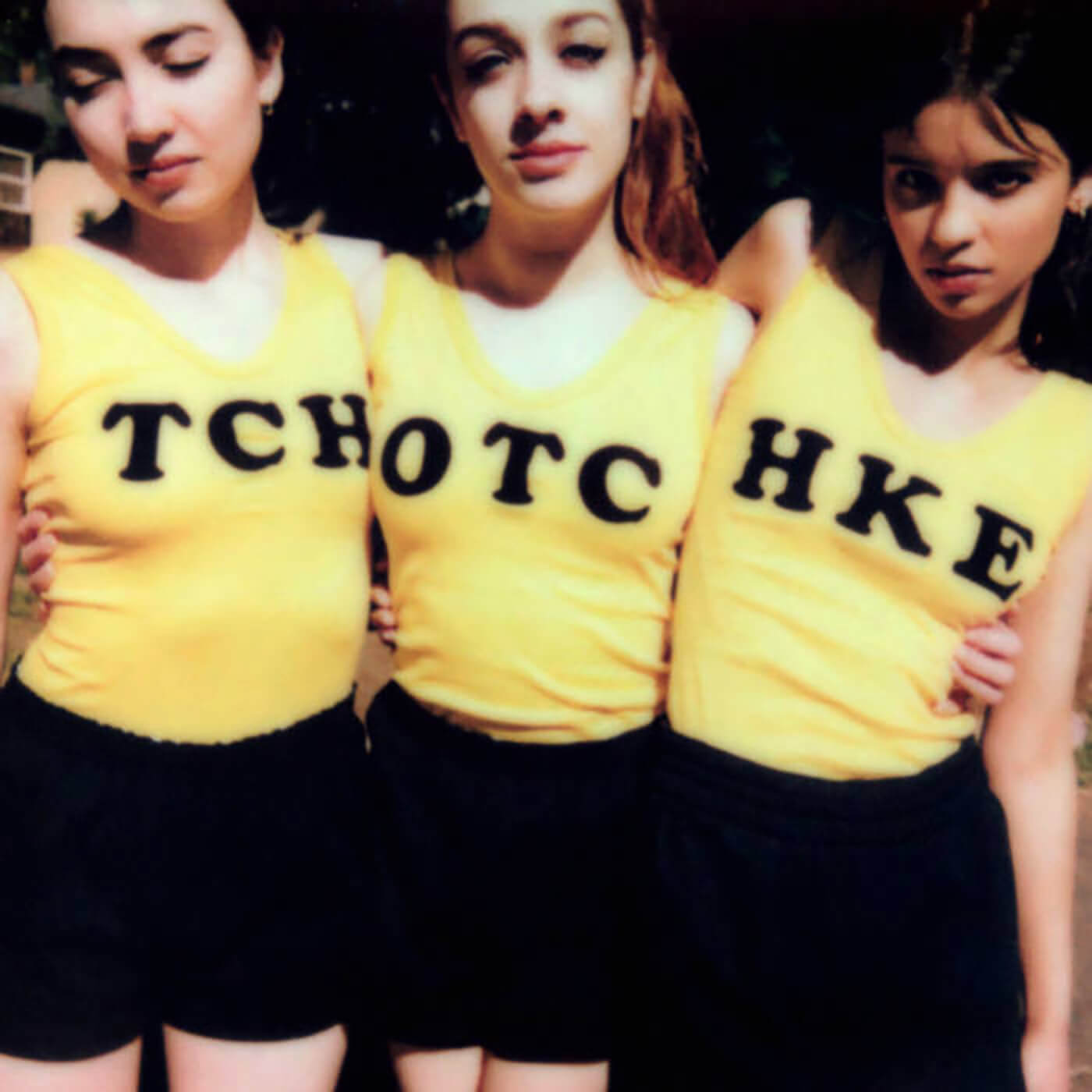 How is touring going?

Anastasia: We finished up our shows with the Paranoyds in October. We would definitely love to do something longer with them in the future cus it’s so refreshing and fun to be with other girls on the road. And we just wrapped up our final run of the year with Adam Green. We will be joining King Tuff on his American tour starting the first day of March and ending the first week of April. Super stoked about that!!

Tell us about the upcoming vinyl pressing of your debut on Org Music. How did that come about? Is the release different to the digital version at all?

Anastasia: Since this album was self-released, vinyl seemed unrealistic. Luckily, Mitch from Org reached out to us not long after the digital release asking if we’d be interested in physical format (other than the cassettes we already had). The vinyl comes with a poster and special bonus track! We’re also gonna have CDs.

What does your songwriting process look like? Is it collaborative between all three members?

Anastasia: Eva and I wrote this debut album during the pandemic. She’d bring a piece to me and I’d write a melody, or I brought her lyrics with a rough melody and we figured it out together from there. We also wrote a handful of the lyrics together, like Come On Sean and You’ll Remember Me. When bringing this record over to be recorded, the [Lemon Twigs] boys helped out a lot with some wonky structures or different placements. We are excited to be starting this next record with Emily.

What was working with The Lemon Twigs on production like?

Anastasia: It was super easy and fun. They’re our best friends, so we had a blast the entire time we were making this album. Brian wrote and arranged all of the string parts on Come On Sean and What Should I Do?
What were the guitar and bass setups like for the album?

Eva: We used a precision bass with flatwounds and a 60s blonde bassman amp. For guitar, it was mostly a strat, telecaster, with a Vox amp. I’m pretty sure we used a kitchen sponge as a mute for the bass on Wish You Were a Girl and guitar on the bridge of Come on, Sean.

Are you using similar setups when you play live? What guitars, amps and pedals are you using, and why?

Emily: In our live configuration, I usually play my Eric Clapton Fender strat. I recently had a rechargeable battery installed for the active pickups; it’s funny to charge my guitar like it’s an Apple device, but the tone benefits from the added boost. I like that the pickups create a balanced sound between a single coil and a humbucker. I also use a Boss pedalboard consisting of a pitchfork, an MXR phase 90 and analog chorus, a flashback delay, and a Boss overdrive. Regarding amps, I use a Fender Hot Rod Deluxe and sometimes borrow the D’Addario’s Mesa Boogie. Since we only have one guitar live, my aim is to have a full tone that effectively supports the rhythm and lead parts I switch between.

Your songs have a really distinct approach to vocal melodies and harmonies – what drew you to this sound?

Anastasia: Being inspired by tons of different artists and fusing genres together is what I have the most fun doing when writing a song. Through years of writing this way, I’ve realised that it is probably the hardest and nonsensical way of songwriting. But it’s fun!