Bespoke acoustic luthier Rory Dowling of Taran Guitars tells us how his first foray into electric guitar building changed his mind about plugging in – and may have edged the worlds of electric and acoustic instruments a little bit closer in the process. 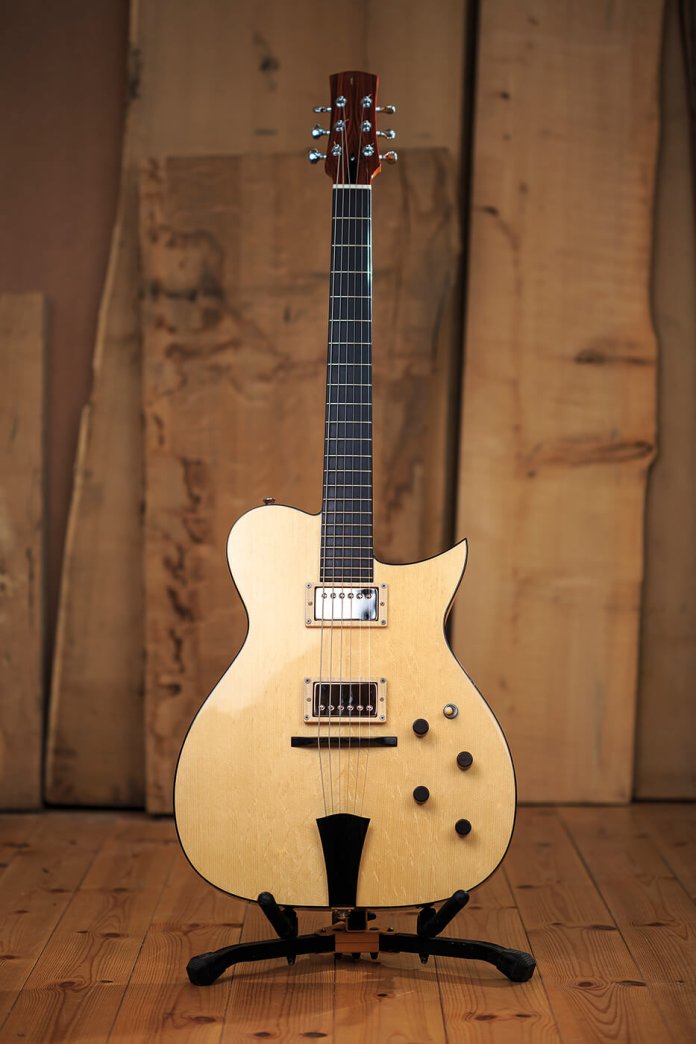 Rory Dowling loves a Tele. It’s the simplicity he likes – the straightforward appeal of a design born out of simplicity. “I just wish I’d invented it,” he says. “If I had, I’d be done. I’d be finished. It’s not going to get better than that! Given a choice of any new guitar, apart from my own, the first thing I would buy would be a ’52 reissue Tele. Yes, I’d go for an electric over an acoustic, maybe because they’re intriguing – the forbidden fruit of the acoustic maker.”

Sitting in his workshop in Fife, Scotland surrounded by exotic woods and exquisite acoustic guitars, it’s hard to imagine Dowling drooling over a straight-up Tele. This, after all, is where earnest musicians find themselves if they’ve committed to having a guitar made to their exact specifications. This is a place where virtuosity meets elbow grease and varnish.

Dowling’s instruments are collaborative undertakings between luthier and musician. An involved process that requires investment, time and patience – Dowling builds around 12 guitars a year, but temporarily closed his order book in 2017. It has since been reopened.

The stripped-down design of a Tele is a million miles away from the bespoke acoustics he crafts from his Scottish lair. With names such as Tirga Beag and Tirga Mhor, these are precision instruments coveted by folkies and fingerpickers. “You get known for building good instruments, but you also get known for building a type of instrument,” he explains. Yet despite Dowling’s forlorn wish to somehow retrospectively beat Leo Fender to the chase, single-cut electrics are far from what Dowling is best known for. Until now. 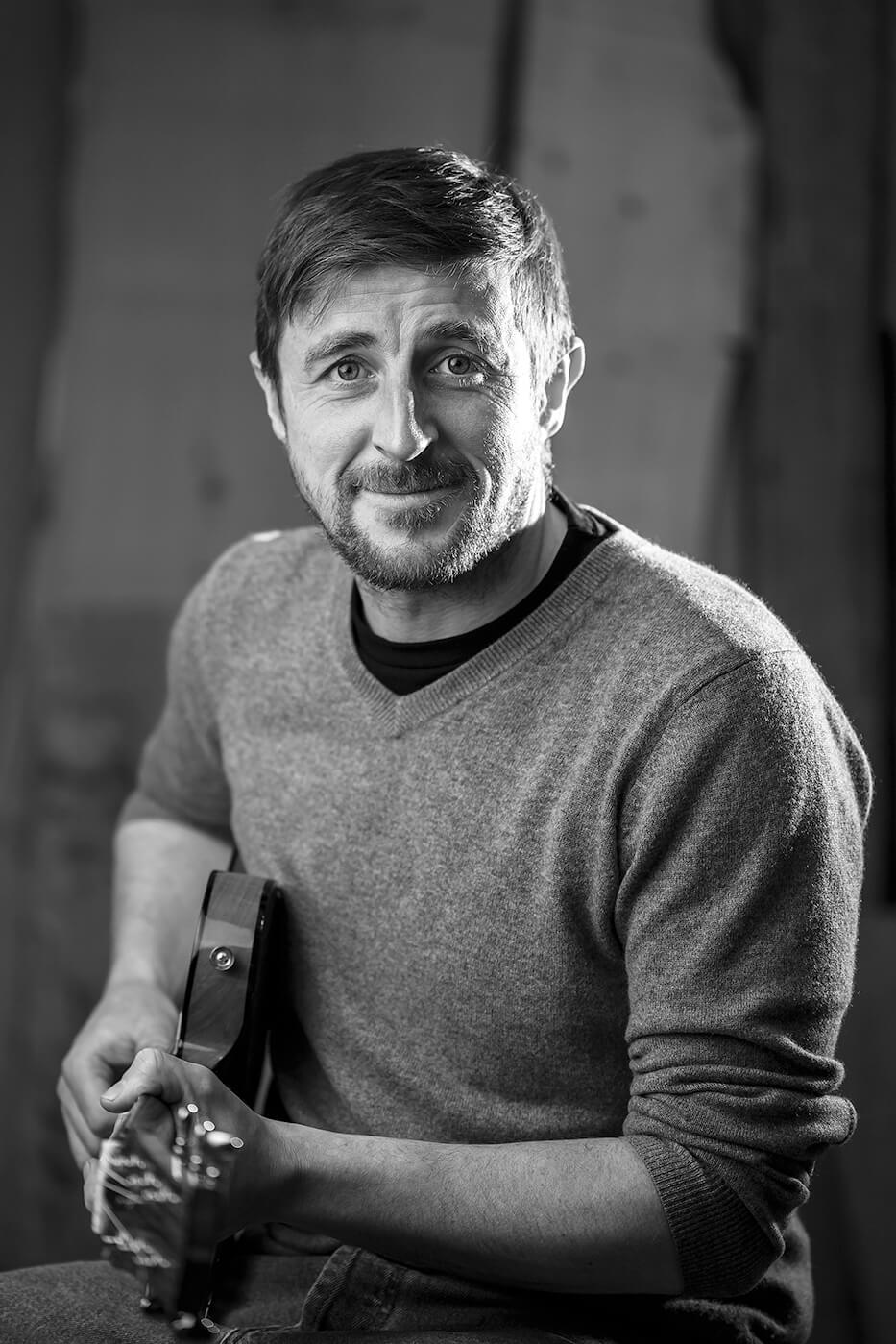 Dowling’s guitars are soulful and considered instruments. They are designed for pubs, clubs and shindigs, for jams, ceilidhs and tours and, until now, they’ve been exclusively acoustic. That changed earlier this year when the Lecky was born – a set-neck electric with a familiar and deceptively simple layout.

With a mahogany body and neck, single cutaway and a spruce cap, the Lecky was created following a three-year gestation period of detailed discussions, plans and painstaking work. Fitted with a pair of Bare Knuckle Mule humbuckers with a six-way switch and push-pull tone pots, it’s the first electric guitar Dowling has built from scratch.

“Building an electric was more challenging than I ever thought it would be,” he admits. “I was really surprised at how complicated it all was. When you look at a guitar like that, you think it’s just going to be two bits of wood glued together, but it’s not. There are five bits of wood just for the body, and then you have the curves. The top is shaped like a dome, so the bridge sits at the highest point of the whole instrument.”

Dowling’s foray into electric guitar making began when a client approached him about making a unique instrument that would combine all the sonic advantages of an acoustic while producing an electric signal from a smaller body.

“He came to me because I had never built an electric before, and I would therefore look at it in a different way,” Dowling explains. “He had been to loads of builders, but they all had an idea of what they thought he should have. I was completely unhindered by the thought of what an electric guitar should be. I don’t have preconceived ideas like that.”

He continues: “My client settled on the pickup system, which I couldn’t, because I didn’t know enough about pickups. What I do know is how to make a guitar lively and responsive, and he wanted a guitar that was super active. He wanted a guitar that sounded halfway between an acoustic and a solidbody electric, something with more life than a standard solidbody.”

Before the specs for the Lecky were finalised, Dowling visited acoustic maestro Martin Simpson, who also offered up some inspiration. “He’d just bought a replica 1950s S-type. It was flawless. Some guy had built it in his bedroom, but it was mental. I’d never played an electric like it. It played and sounded like an acoustic. It was alive in your hands. As soon as I played it, I knew that was what we needed. That blew me away.”

The replica’s light ash body with a thin finish got Dowling thinking. “If we want an instrument to be light and responsive and sound like an acoustic, but be electric, why don’t we build it like an acoustic and make it electric? That’s where the idea for the spruce top came from.” 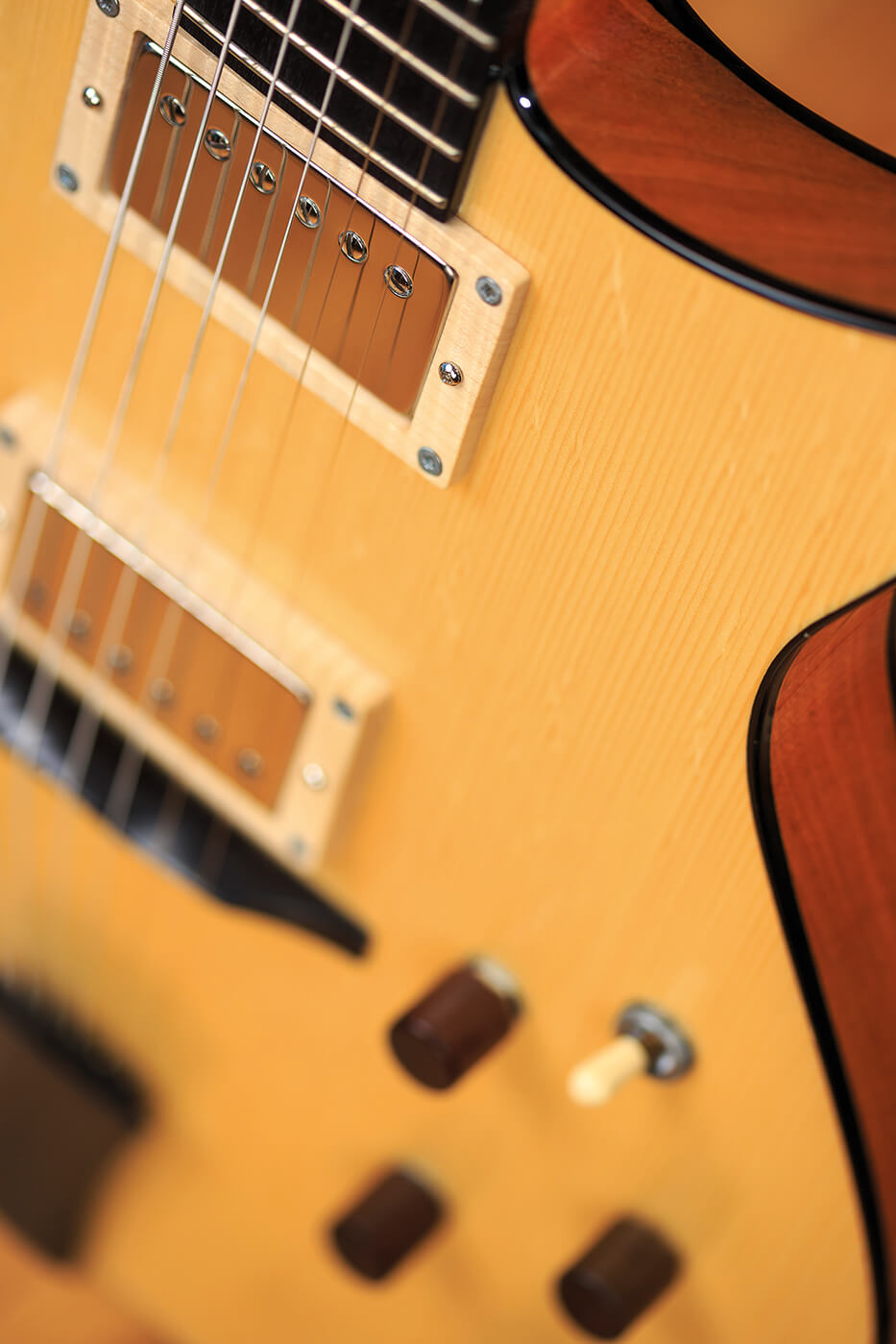 Dowling’s plan was to fuse the worlds of electric and acoustic instruments by creating a guitar with all the sonic response of a hollowbody, but with the playability and convenience of a solid. He decided to build his first electric using the same principles that he would often apply to his acoustics – a floating bridge, solid neck joint and the light-weight strength of spruce. “The top is Swiss bearclaw spruce,” he explains. “It is incredibly light, very strong and resonant. The Lecky is a solid instrument, but in construction terms, it’s probably as light as you would want it to be.”

The back and sides of the guitar are made from Honduras mahogany – known as Swietenia macrophylla in plant-y circles – which Dowling describes as, “a very specific type of mahogany, a true mahogany, and the dog’s nuts”. The binding is Rocklite, giving it a clean and unfussy finish… almost unremarkable. That is, until you strum a chord and feel the resonance against your body. Rather than craning your neck to hear what the unplugged guitar is producing, the Lecky comes alive in your hands.

While the body had to be light and lively, the Lecky’s neck had to be steady and secure. “The thing about my client is he is always gigging; out and about on buses and trains,” explains Dowling. “Everything I build for him has to be rugged.”

To secure the neck, a three-piece design was agreed, featuring a slab of Honduras mahogany cut in two, with a middle element of rock maple. “By splitting the mahogany down the middle, you release any tension in the neck,” he claims. “The other reason for the laminations is that it strengthens the headstock.”

In addition, two carbon-fibre rods and a two-way truss rod were embedded for added stability, while on top, a bound Rocklite Ebano fingerboard with 22 frets was finished with a bone nut paired, fittingly, with a bone saddle. 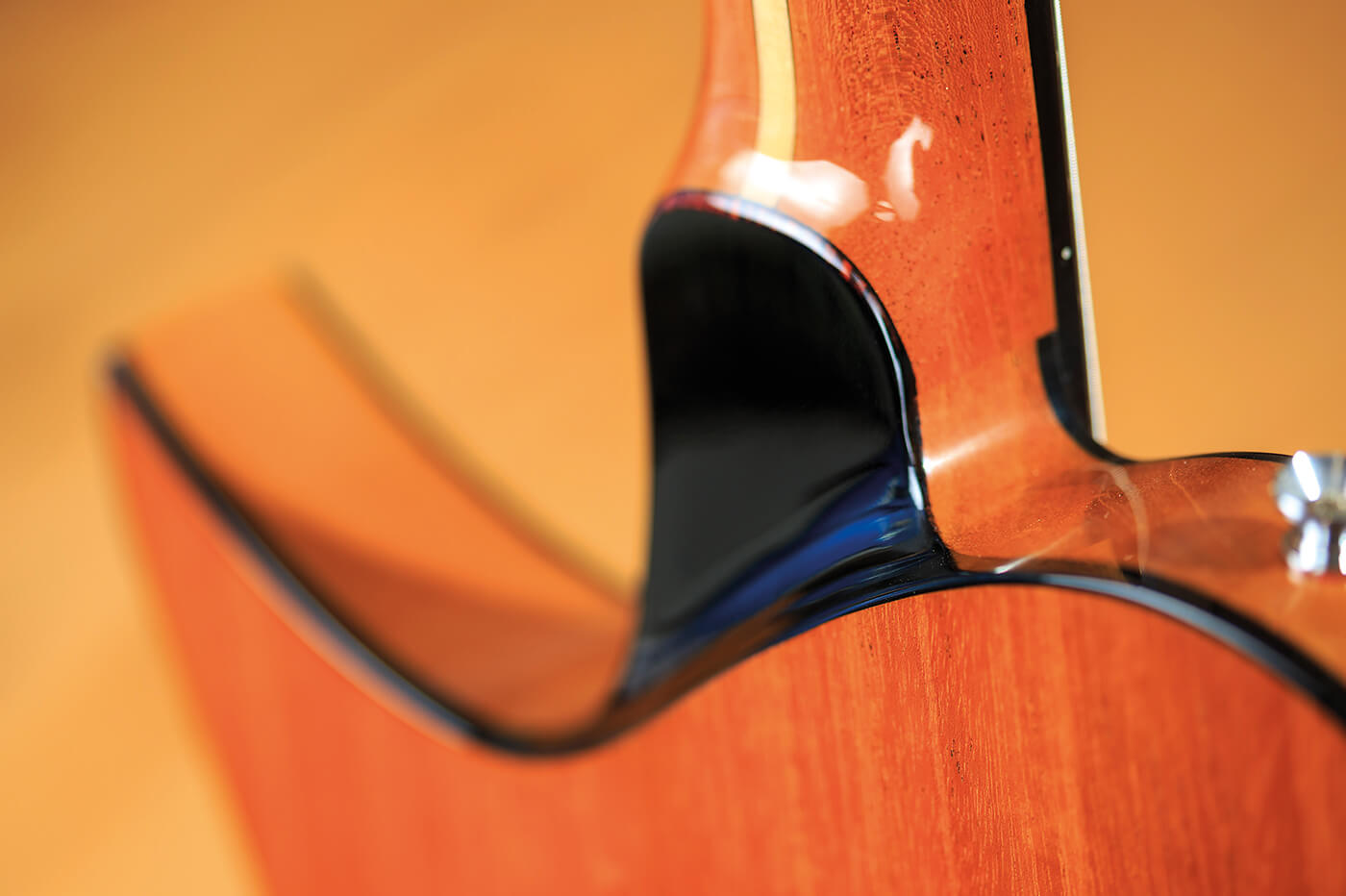 Nothing had been left to chance, but to deliver a responsive acoustic experience, Dowling had to move some air. So, while the centre of Lecky would remain solid, on either side, the guitar would be chambered – crucially, from the back – to accommodate the lightness of the spruce on top. With a cap on both the back and top, this is where Dowling’s venture into the world of electric design became complicated. “It’s a chambered body with a spruce top,” says Dowling.

“In woodworking, there’s a thing called ‘telegraphing’, where a denser piece of wood will move more than a lighter piece of wood. If I had chambered the guitar in the traditional way, from the top, you would be able to see all the chambering through the spruce. So this guitar is chambered from the back.”

To take advantage of a lively spruce top, Dowling had to turn the process of chambering on its head, removing wood from the back instead of from the top. It meant that the spruce cap sits on top of a “full face of mahogany” that has been engineered to ensure it’s thick enough to stop the tell-tale signs of telegraphing, but thin enough to make the top vibrate. “Getting those chambers to be the right depth for this to work was bloody difficult. Like really difficult.”

Dowling may have pushed the envelope to create a guitar that rings, but his efforts were worth it. Rather than producing a focused, targeted sound, the Lecky seems to produce tones that broadcast in 360 degrees. It’s a three-dimensional sonic experience, in an unassuming single-cut body that may have a very passing resemblance to a Tele, but it doesn’t sound anything like one. 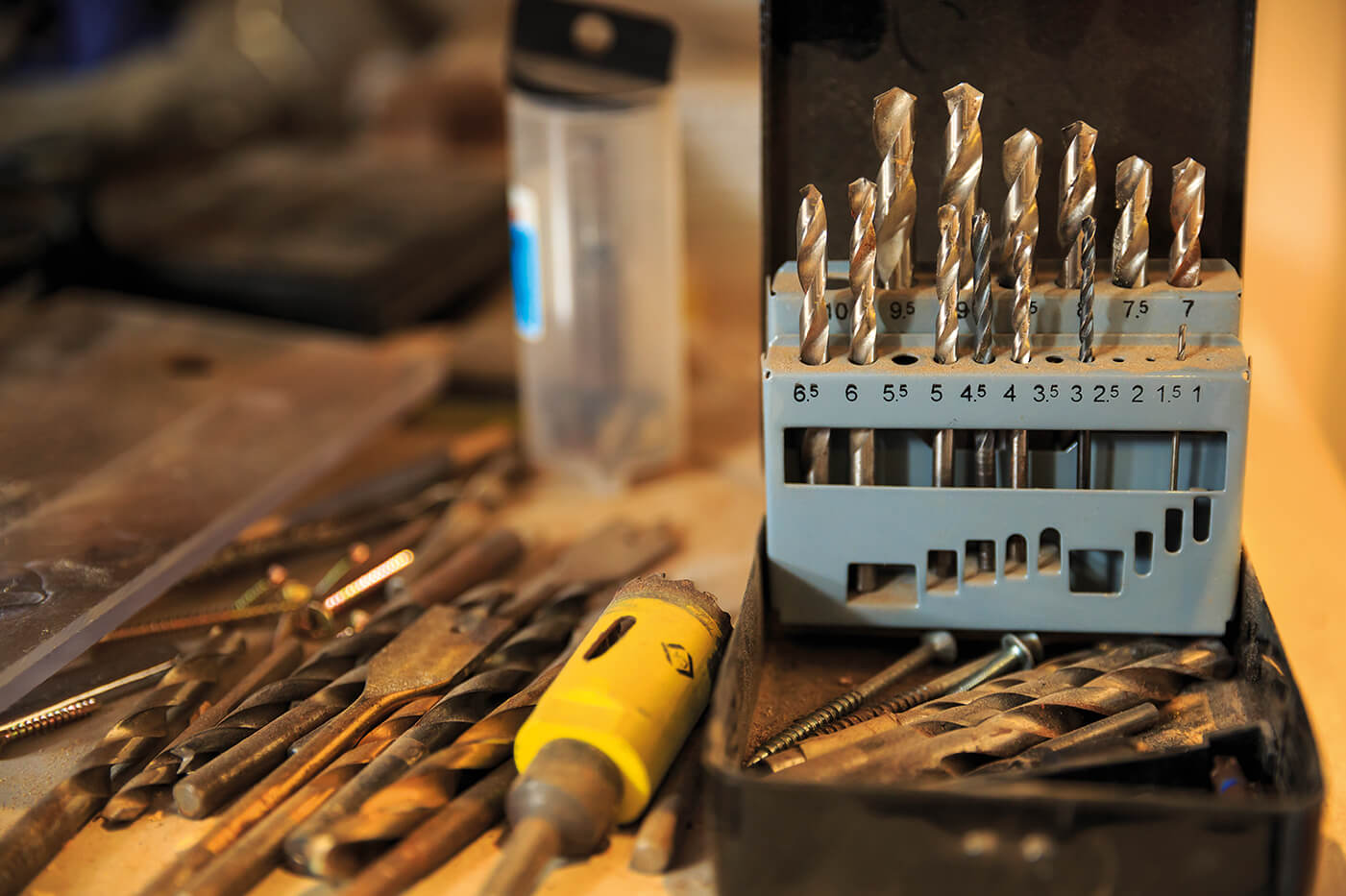 The experiment had paid off, although it hadn’t all gone his way. “In the future, the neck joint will be a through joint right up to the pickup,” Dowling explains. “At the moment, it’s a mortise and tenon, which is a really solid neck joint. It’s how all Les Paul necks are put on.”

He continues: “Originally, the neck joint was like a set-neck Tele, but the client asked if there was any way of reducing the material. I was happy to do it, because we wanted to do it, but it’s the one element of the guitar that I find annoying. I have to build another electric just to do that neck joint again.”

It might be grinding Rory’s gears, but to the untrained eye, the joint works perfectly. Smooth and recessed, it provides ample access to the upper frets and feels solid in the hand. But that’s not Dowling’s assessment. “There was a design change at a time when it shouldn’t have happened, that’s what I see. It should have changed on paper, rather than changing the wood. Saying that, I love the sweep onto the cutaway. That’s really nice.”

Despite the trials and tribulations of building his first electric guitar from scratch, Dowling is satisfied with the end result. “My client hasn’t put it down,” he says, “and I’m pleased, because it’s super stable. It’s doing more than he thought it ever would, because of the way it was built. He’s getting way more from the guitar than he thought he would.”

However, with the glorious lens of hindsight to focus his thoughts, Dowling admits he has had to revise his views on electric guitars. “It looks really simple, but building it was quite complicated,” he admits. “I thought electrics were two bits of wood with a neck glued onto them with the pickups doing all the work – like most acoustic builders do! What I’ve learned is electrics can be good and bad, and it all comes down to the construction, choice of woods and the design.”

For those intrigued by Rory’s unique instruments, the Lecky commands a price tag of £2,700, which includes a hugely versatile six-way selector and the Bare Knuckle pickups. A simpler arrangement is also available, but with the same commitment to quality and refinement that makes this guitar so special.

For more on the Lecky and Dowling’s other guitar builds, visit www.taranguitars.co.uk.