The Cult’s Billy Duffy on 1989 album, Sonic Temple: “We wanted to capture the essence of what a powerchord felt like”

30 years on from the release of the band’s hard-rocking fourth album, the guitarist looks back at how The Cult’s mid-80s albums set them on the course for rock ’n’ roll stardom.

It’s now 30 years since The Cult released Sonic Temple, leaving no doubt that the band had shaken off their indie shackles to make a fully fledged rock album. The album’s artwork alone was a statement of intent, with guitarist Billy Duffy in full guitar-hero pose with legs apart, striking a black Gibson Les Paul borrowed from Sex Pistol Steve Jones.

With long flowing hair and a bare chest, Duffy now more resembled a dishevelled biker than the quiffy platinum-blonde indie-goth responsible for a string of distinctive riffs earlier in the decade. His most visible guitar had been a Gretsch White Falcon that had featured on era-defining singles such as She Sells Sanctuary and Rain, both from their seminal second album, Love, released in October 1985. In Britain at least, Duffy suggests that rock music had become “a bit like forbidden fruit”. 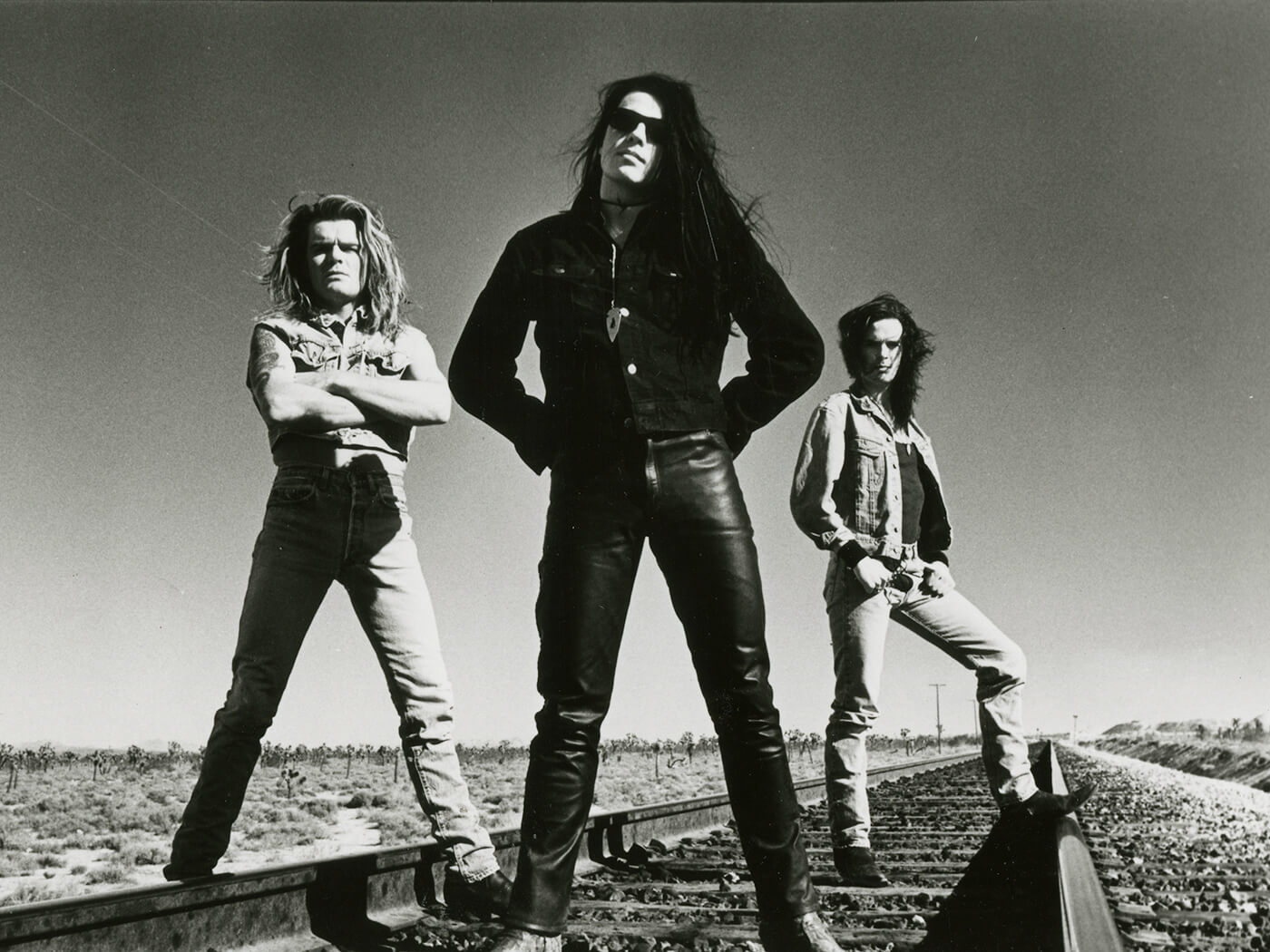 “Growing up in England, you couldn’t do this or that and in the London-centric music press, they were pretty brutal about who they liked and who they didn’t!” he tells us. “If you drank in the wrong London pub, you probably wouldn’t get a good review for anything you did when it mattered.”

It was The Cult’s 1987 album Electric that helped set the tone for a classic-rock revival in the mainstream. “You have to contextualise it, looking back you would say yeah, with Guns N’ Roses rock came back, but a lot of other bands were involved,” he recalls. “We were one of the bands that helped bring it back with Electric around the same time as Appetite For Destruction and they were punk fans really, certainly Duff McKagan.

Initial attempts to record Electric in England had been a struggle, especially with the pressure to follow-up the three hit singles that Love had spawned – so the decision was made to head over the Atlantic and into the arms of Rick Rubin.

“That album was made as a reaction to the failure of making the record on our own in England,” Duffy explains. “Rick Rubin’s quote is accurate, he said: ‘I didn’t so much produce the Cult, I reduced them.’ He took away a lot of the frills, we took Love on tour around the world and wanted to develop that sound and get a bit heavier and a bit more psychedelic acid rock. It was lean, the band was just putting on a bit of muscle. We were gaining more experience and spending more time in North America where rock music wasn’t considered a sideline and we wanted that to influence our music.

“Steve Brown had done such a brilliant job on Love, he stayed in England and worked with bands who wanted that ‘Cult’ sound, but we were already moving on. With Rick, it was like somebody throwing a hand grenade in the room.”

Along with Slayer, The Cult were one of the first bands that Rubin had produced who recorded with a live drummer.

“Before that, it was drum machines with Beastie Boys,” Billy recalls. “But he loved early Aerosmith, early Zeppelin and AC/DC… specifically Highway To Hell. Those were three bands that we all agreed were brilliant. With that in mind, we went into the studio and started disassembling all the songs we had recorded in England.”

As one of the most distinctive guitar players of the 1980s, Duffy was now indulging in what his contemporaries and life-long friend Johnny Marr might consider beyond the pale.

“To my mind, you had the Bunnymen, Simple Minds and U2, obviously with most bands at the time, riffs were there, but you wouldn’t call them blues-rock based riffs, they were melodic hooks. With bands like The Psychedelic Furs and people like Billy Idol there were all these guitar figures and hooks which linked back to the Sex Pistols and The Stooges, the lineage is there, but as time passes, you’re trying to find your variation, depending on who you are in a band with and what that band can get away with. 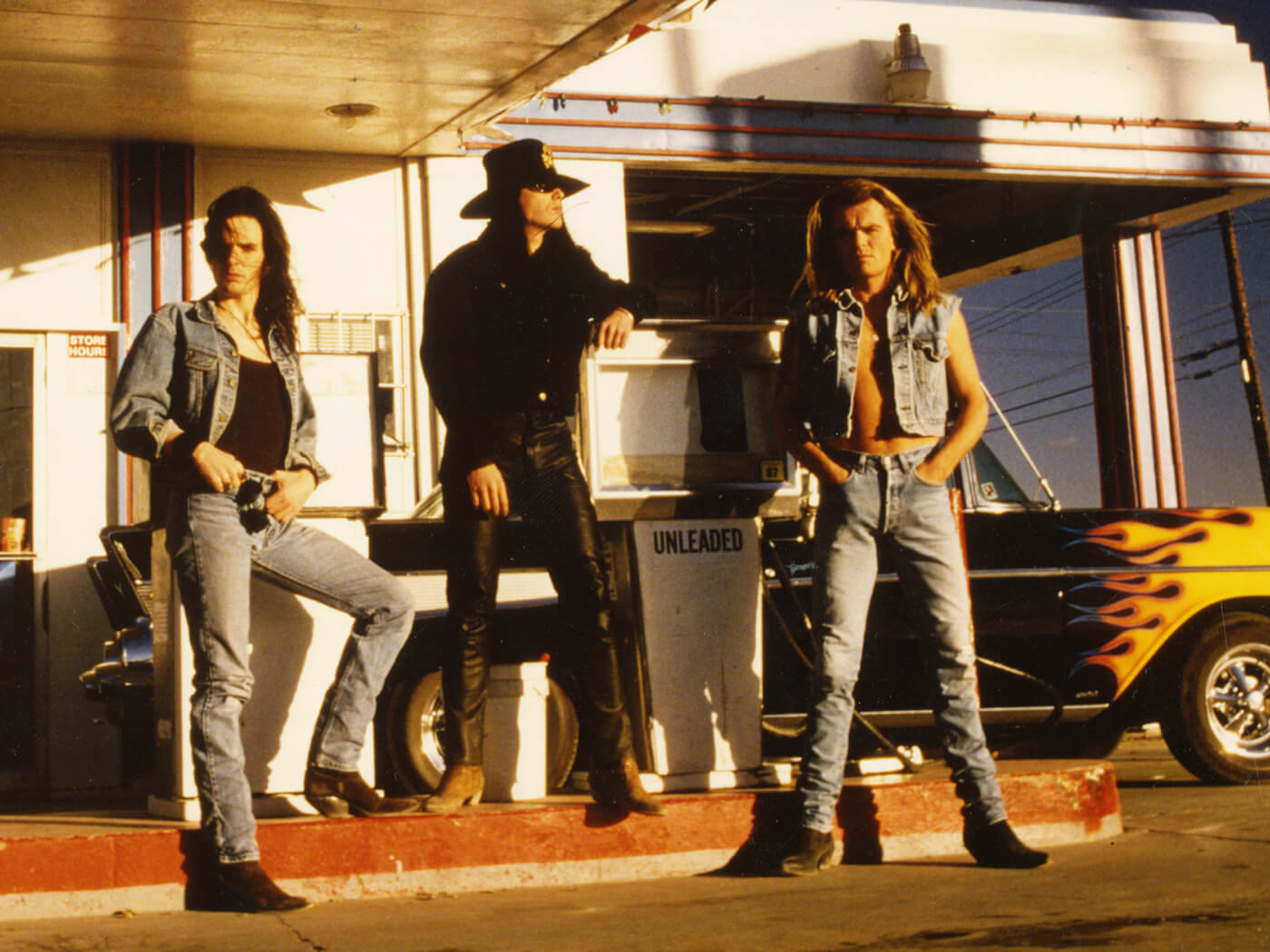 “It was exploratory, The Cult’s always been a riff-driven band, even in the early stages with the Death Cult and Southern Death Cult, it was just that we started to get into the more forbidden fruit, which was blues-rock riffs. It changed the rhythmic sense of the band, which was very tribal in the early 80s, changing to a more rock, swing beat. Those are the things that happened on a mechanical level.

“Electric was great, but we were never going to make that album twice because it was so derivative and very ‘cartoon’, although a lot of people love it. It was necessary to make that record to have the longevity that we’ve maintained. To make such a ridiculously bold statement as that, it was less than two years between that and the Love album, it was quite a quantum leap to go from big white guitars with echoes, effects pedals and chorus pedals. The clues are on that album if you listen to the tracks Love and The Phoenix.”

When it came to nailing the elusive guitar sound and energy on the finished work, Duffy points to the chemistry between Rubin and his partner George Drakoulias as being a key component.

“Rick was very present, solid and attentive throughout, as was George and that was important,” he explains. “They had a singular vision throughout the process. They saw what we could become, probably before we did.”

The Electric album was in many ways a template for Sonic Temple, a long-player that would transfer The Cult into the rock mainstream, shifting 1.5 million units in the United States, making the Top 10 Billboard album chart. It would peak at No.3 in the UK while producing a string of transatlantic hits that would soon become mainstays on American rock radio stations. It was clear from the cover alone that The Cult had made an all-out rock album.

“It was definitely mutually agreed by all concerned that we would go for that image,” Billy says. “It wasn’t really about me – it was more the symbolism of the guitar. We wanted to capture the essence of what a powerchord felt like and we managed to pull that one off, that’s what it was about.” 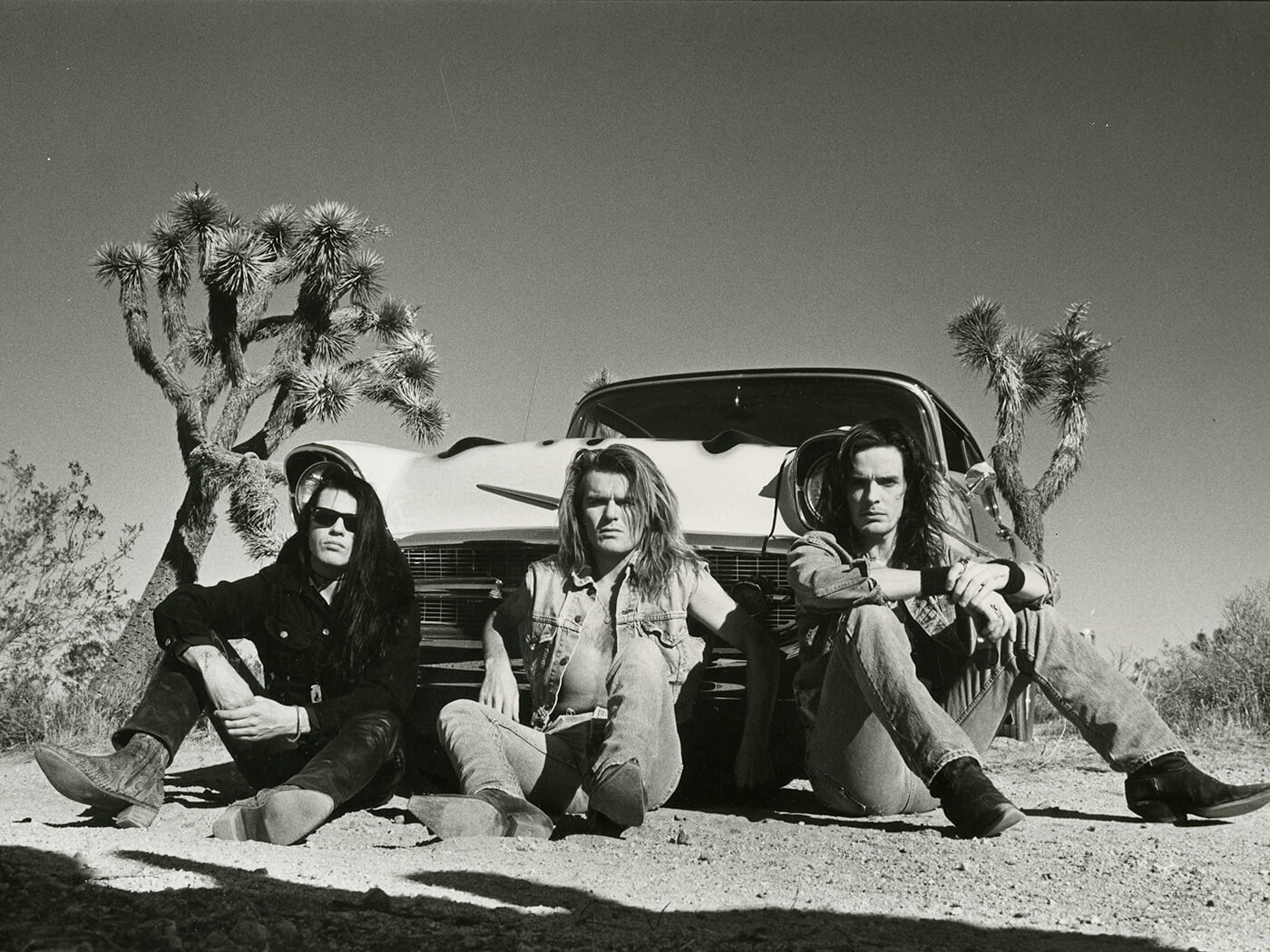 Sonic Temple managed to retain the band’s European sensibilities and avoided falling into the cliched terrain dominant at the time, allowing the album to age well.

“It was a different take,” adds Duffy. “It was less misogynistic; you never really saw scantily clad women in our videos, at least. Ian wrote some of the lyrics in Paris and while travelling, it’s rock music from a European perspective with the sensibilities of punk, which was how we all learned to play.”

Duffy’s embrace of the Les Paul was a notable return to his roots. “I’d come full circle with the Les Paul. I was talking to Steve Jones about loving Ronno [Mick Ronson] and that was a common thing between us. I started taking the front off the Les Paul and went back to the natural finish while also playing the wah pedal half-closed like Ronno. It was back to guys like Mick Ronson, Mick Ralphs, Thin Lizzy and Jimmy Page.” 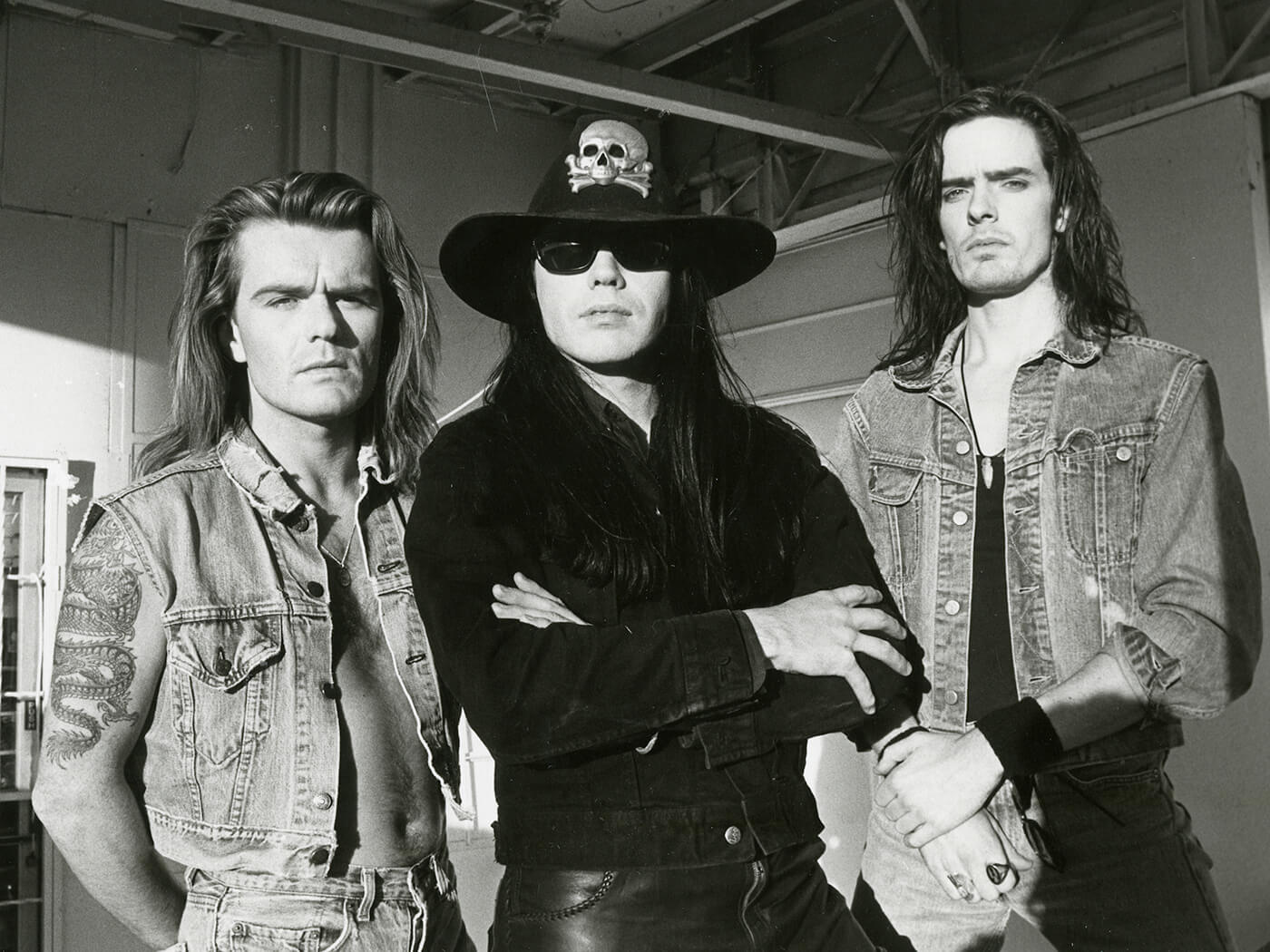 The White Falcon remains Duffy’s most iconic and heavily associated guitar, however, and for that, we have to go back even further.

“That goes back to when I joined Theatre Of Hate, because Kirk Brandon had one and it seemed like a really interesting sound,” says Duffy. “We were trying to get that spacial Ennio Morricone thing. They had a saxophone with very tribal drumming and the guitar had a very different function, the Les Paul wasn’t appropriate.”

By the time he got to Love, however, there was a more Byrdsian influence, with the 60s jangle coming firmly to the fore. 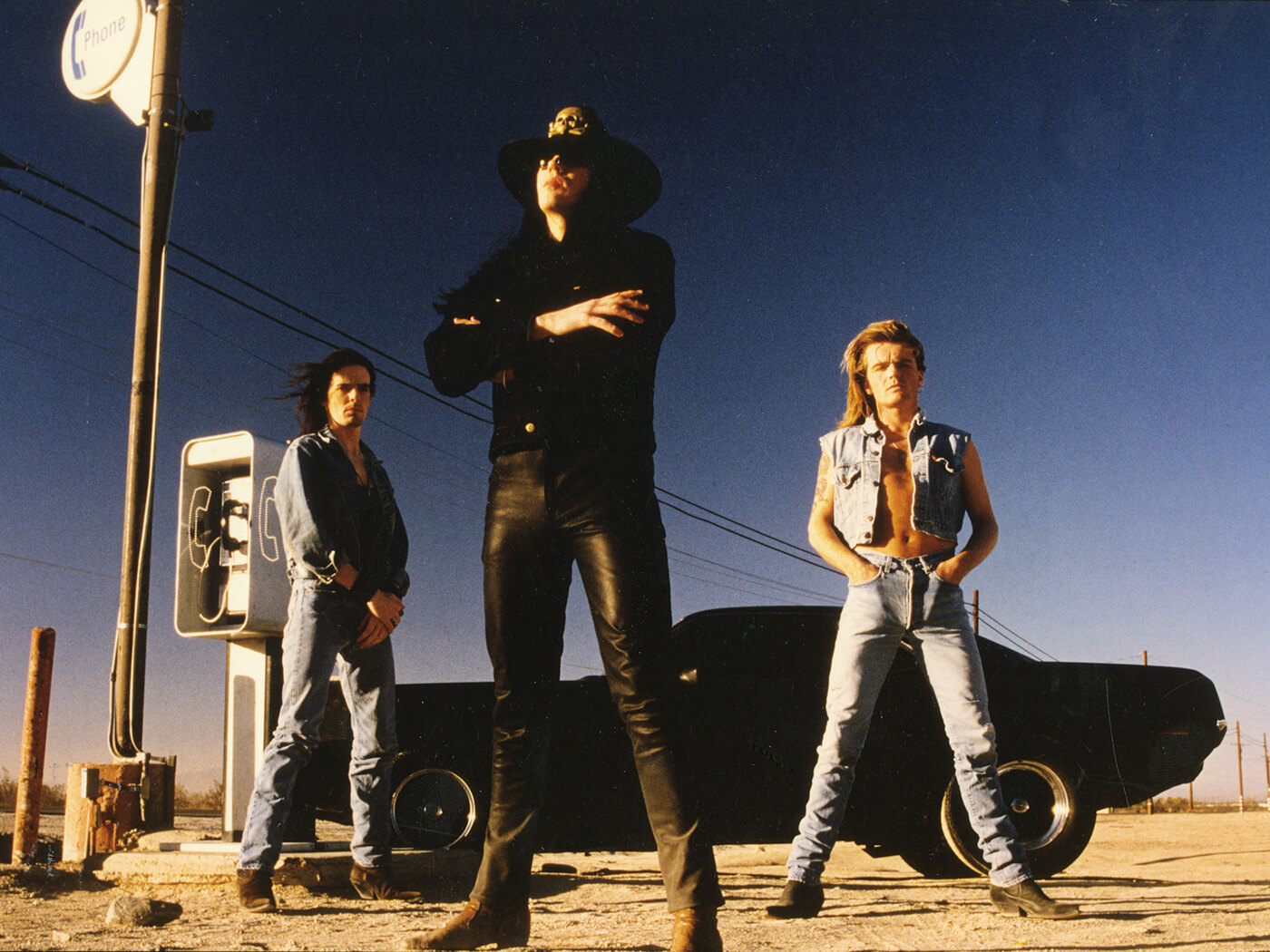 “I was aware of the format and how those riffs worked mechanically, but I never went down the road of saying: ‘I’m going to get a Vox and Rickenbacker 12-string’ – but we did play around with part of that. A lot is going on; I mean The Skids are in there, too and that whole Celtic sound,” Billy observes.

Sonic Temple would also mark the start of a long association between the band and producer Bob Rock, who has now produced five albums with The Cult, most recently 2016’s Hidden City.

“Bob is an alpha male,” says Duffy, “He’s kind of part leader and part father-figure. In common with Chris Goss [who co-produced the Choice Of Weapon album with Rock], he is a guitar player, both of them are musical. Rick Rubin is not musical at all, but he knows what he likes and more importantly, what he doesn’t. Goss is a brilliant producer but he’s more passive, like a guy hanging out waiting for something to happen, whereas Bob is like a ‘walk in and make it happen’ guy, sometimes you need one and sometimes it’s the other.

“We did some great stuff with Chris Goss, it was just that, to do a whole album, we kind of ran out of time and money. The album didn’t sound finished to my mind and, more importantly, to Ian’s. It just didn’t quite have the cherry on the cake and that’s why Bob came back. He’s done five albums with us and they all sound kind of different, we’ve tried to use other producers and just come back to Bob. I think sometimes you have a special relationship with a producer and he understands. He just gets the job done.”

The Sonic Temple 30 box set and reissues are out now. The Cult are touring throughout the UK from 15 October.