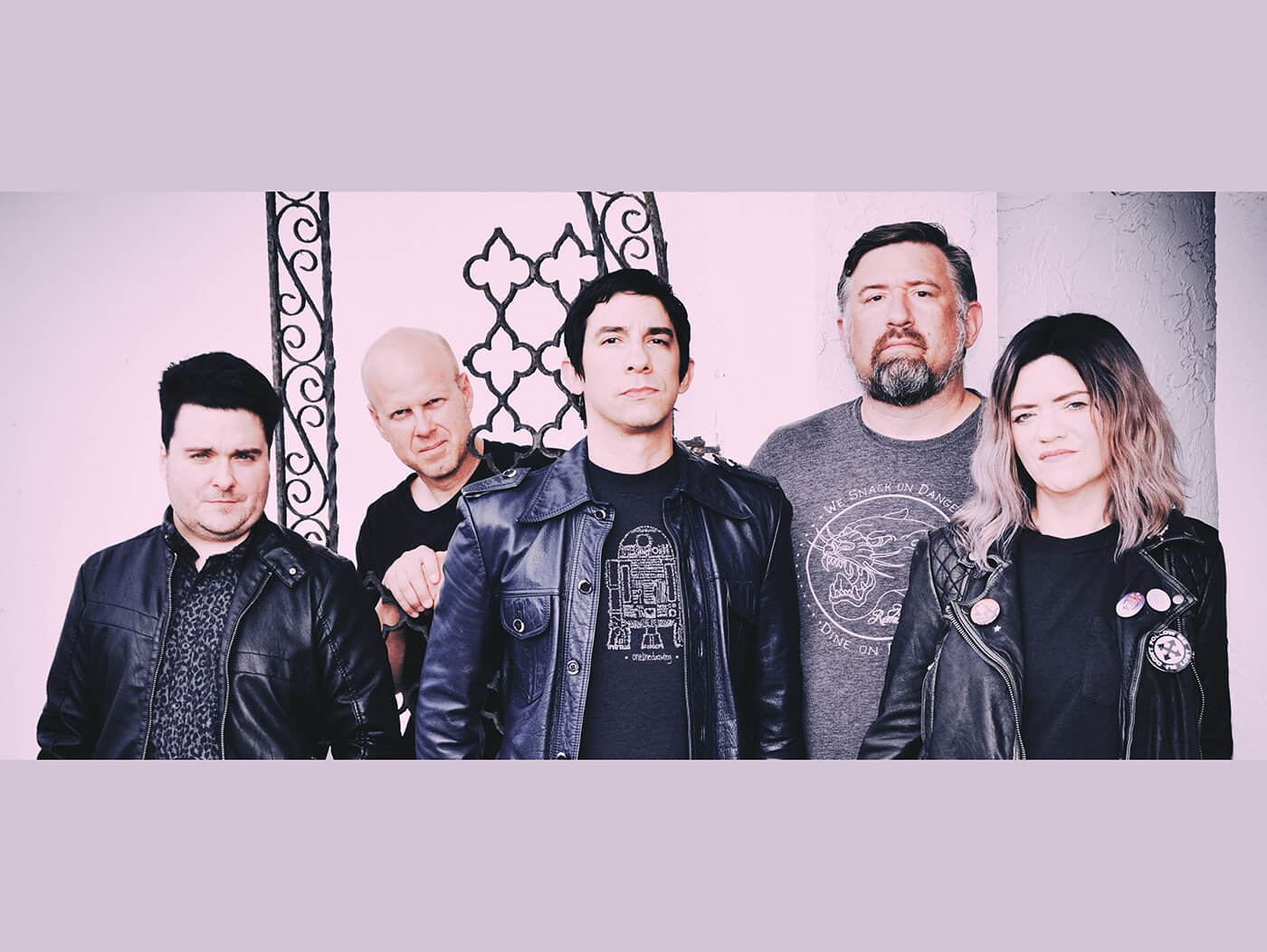 If you were a fan of the second and third wave of emo (circa late 90s to early 00s) then there’s a good chance you’ll find a few familiar faces in The Darling Fire. Featuring members of Dashboard Confessional, Further Seems Forever, The Rocking Horse Winner and more, this brand-new rock outfit are equal parts crashing guitars, emotive lyrics and nuanced storytelling.

The Darling Fire are about to drop their debut album, Dark Celebration, that, upon closer inspection, has a lot more going for it than it lets on.

Speaking to Guitar.com, guitarists Jeronimo Gomez and Matt Short tell us how this project was born out of a growing despondence towards life, but has quickly matured into something more sanguine. They also share about their gear and how the guitar is a central theme in The Darling Fire’s music. 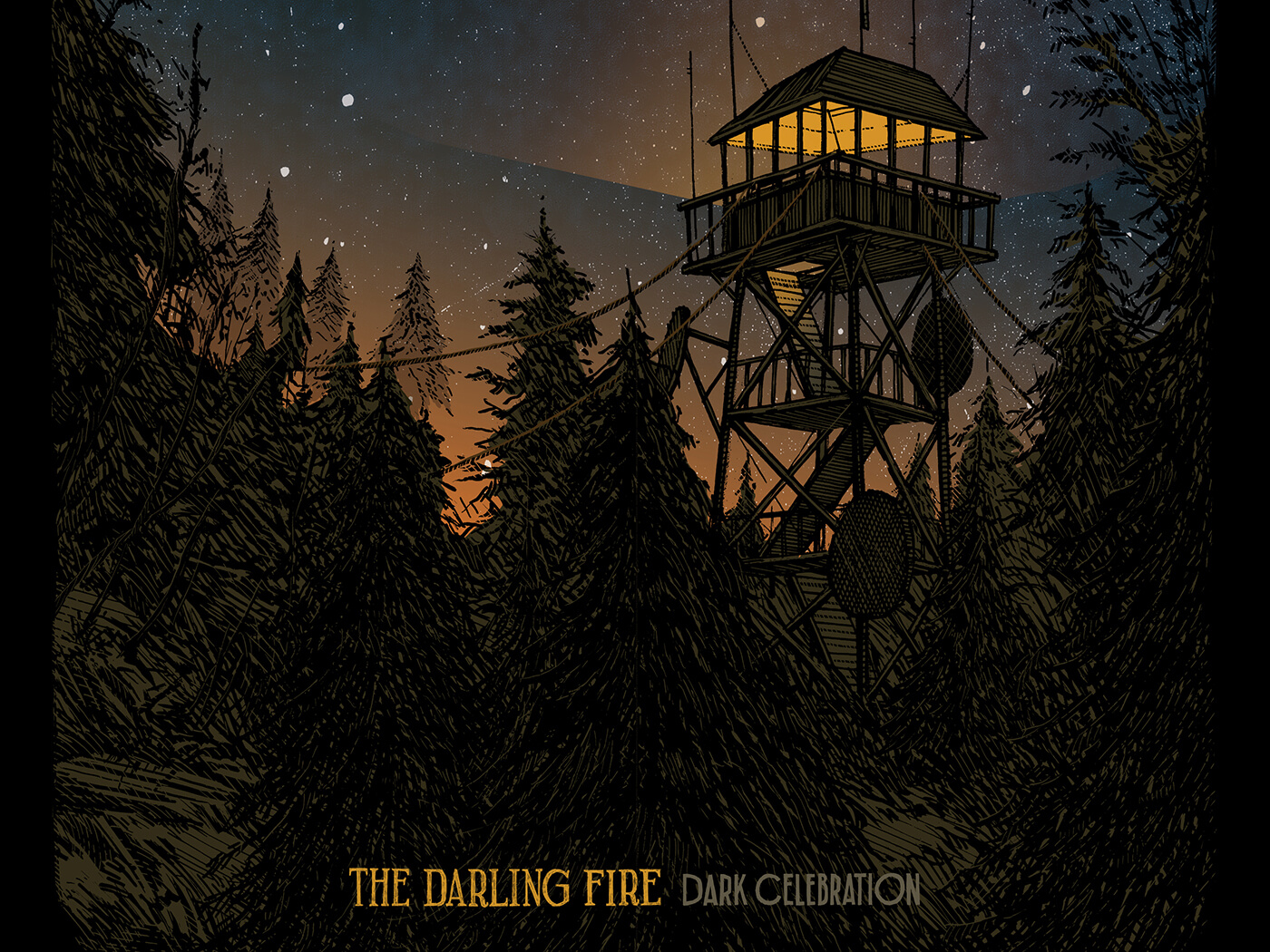 Can you tell us how this project came about?

JG: My wife [Jolie Lindholm] and I were in a band previously [The Rocking Horse Winner], in the late 90s to early 00s, and when it broke up, we stopped playing music completely. I sold everything and hadn’t played since probably early last year. We were just unhappy with where we were in our lives and just wanted to do something a little different – and dove into music again.

So we wrote a couple songs and did some bedroom demos. When we were considering who we could get to play drums, our friend Steve [Kleisath] who was in another band called Further Seems Forever, was the first to come to mind. So we contacted him, sent him the demo and he was really into it. Then we had our first practice.

MS: I had previously met Jolie and Jeronimo when they were with The Rocking Horse Winner. We were playing in similar type of bands – I was in an emo project called Jasperwal – but we never really played shows together. So fast forward to when I met them again years later, when they came in to where I worked [Guitar Center, Florida] and we started chatting up. The discussion about working on music came up, and like Jeronimo said, we were all coming out of some hard times, and this seemed like an adventure I could get onboard with.

So they let me listen to some of the demos they’d been recording and I was like, “Yeah, that sounds really good!” They asked if I wanted to do this for real, and of course I agreed so that’s kinda how it all got started.

Greg [More], our bass player, was introduced to us by Steve. We tried someone else out previously but it didn’t work out. But yeah, Greg turned out to be the perfect person for the band.

How would you describe the Darling Fire sound?

MS: It’s funny, Steve – I think – was the person to coin the term to describe our sound: heavy metal Cocteau Twins [laughs]. I have to agree with him because, well, I love the Cocteau Twins and, musically, there’s a lot of similarities. But if we’re going to tag it to a genre, a lot of people have been labeling us as “post-hardcore revival”. I think there’s also a lot of other influences like shoegaze – especially for myself – and alternative rock, too.

Going into Dark Celebration did you guys have a clear idea of what you guys wanted for guitar?

JG: We knew we wanted to be on the heavier side. You could say the music sounds a little darker, but we knew we wanted a thick and big guitar sound. We want to really put a lot of emphasis on the guitars. But a lot of the writing is just happy accidents that just happen. I didn’t really go in there knowing exactly what I’m gonna do. I know the kind of vibe that I want, but I don’t know what I’m going to do. I am not a trained guitar player. I know some notes and I know some chords and stuff, but I’m not like a technical player. I don’t know like the theory and stuff. So when I go into it, I stumble and trip over myself a lot. But I think sometimes that’s kind of fun because end up with these happy accidents.

Jeronimo, we’re more accustomed to hearing you on bass. What influenced the switch to guitar?

JG: So as I said before, after our last band broke up, I sold all my equipment. I didn’t really pick up an instrument for maybe 10-plus years, until my girlfriend started learning the guitar. Then it kinda sparked something in me. Like “Oh, maybe I should start again.” So yeah, I picked up the bass again. I bought a bass, and with her guitar laying around, I started strumming on that for a little bit too, and before you know it, I started writing songs.

We understand the album has an interesting back story regarding the pressures of modern society. Can you shed a little more light on it?

MS: With Dark Celebration, again personally, the idea has to do with people going through difficult times, how we tend to look at the negative aspects of life as the bane of our existence. But you can also choose to take it in and push yourself to do better. To strive and mould yourself into something. That’s my experience. It’s the dark things that push you to survive or evolve, and personally, that’s what I hoped would come through in the album.

We wanted to find out a little more about the recording process. What was it like working with J Robbins?

JG: J is one of the most talented people I’ve ever met. He’s got an amazing ear and some great ideas. I love his previous projects. Working with him was a bucket list thing for me. I’ve been listening to Jawbox and Burning Airlines since I was young and he’s just amazing. He is so on his game when it comes to perfecting guitar tones and effects, and coming up with melody ideas for vocals. The guy’s seriously like a genius.

I wish we would have had more time with them because we recorded the album pretty quick. It would’ve been nice to ask him questions about Jawbox and all that stuff, but we didn’t really have much time to mess around.

What are your main guitars at the moment right now?

JG: I have two Fender Jazzmasters. One Jazzmaster Professional, which is one of the newer models they have and then I have a Jazzmaster Deluxe, I believe it’s called. It was made for Chicago Music Exchange, a custom run of guitars. I found this one in a pawnshop and I picked it up.

MS: I have an ’88 Japanese Fender Strat that I’ve had for a few years; I got it online, took out the pickups and installed Billy Corgan Signature DiMarzios in it to get more of a heavy bottom end.

And I also have a Jazzmaster that Jolie found for me. I told her there’s this guitar I really want to get but it could probably take a year [through Fender Custom Shop]. And she actually found one in the exact colour I wanted on Reverb, I believe, and the price was way better [laughs]. It’s a 2017 Custom Shop Jazzmaster with the Reissue or ’67 Classic Series pickups I think. I immediately got that and it’s become one of my favourite guitars.

I also have a Mexico-made 2017 Jazzmaster that’s a Troy Van Leeuwen signature. I got that guitar when I was still working at Guitar Center and I was able to get a really great price on it, which is awesome [laughs]. I didn’t really like the Classic Series pickups it came with so I swapped it out for V-Mod Jazzmaster pickups to give it a lot more of a thicker tone. So yeah, those are the guitars that I have been using live and to record.

What’s an interesting aspect about your rig that would surprise most guitarists?

JG: I guess it’s more about me than my rig, but maybe how I have no idea what I’m doing [laughs].

MS: For me, it’s how big a sound and tone you can get out of the amp and guitar combination. That’s what I get most compliments about when it comes to my rig.

Dark Celebration is out 14 June via Spartan Records.