The Canadian three-piece on how the looming pandemic shutdown pushed them to their limit to get their new record, Fuck Art laid down, even if it left them as “shells of human beings” 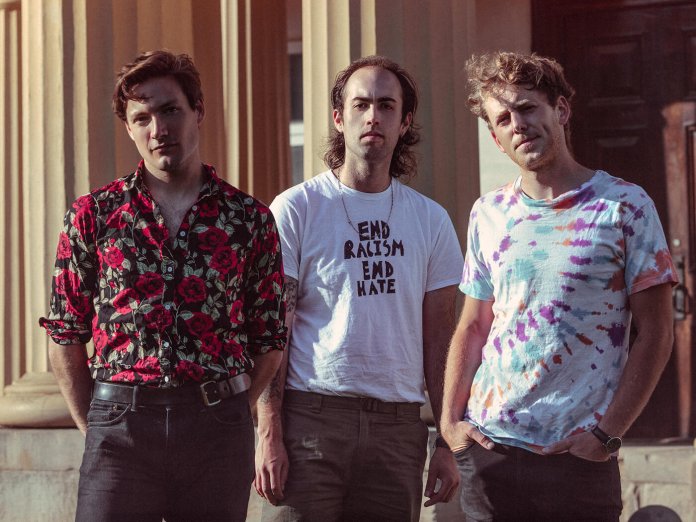 The Dirty Nil have played enough empty shows and slept on enough hardwood floors, to understand that sometimes you have to roll with a situation that’s less than ideal. So, when COVID-19 kicked the door in at Toronto’s Union Studios back in the spring, as they worked on their gleaming, riff-laden new record Fuck Art, the power trio made it work.

Right after finishing up tracking bass and drums, producer John Goodmanson, returning after helming the band’s 2018 rager Master Volume, caught the last flight out to Seattle. Engineer Darren McGill then laid it out in black and white: Luke Bentham had two days to track the LP’s guitars before the studio closed its doors.

“We basically put in two 16-hour days,” he recalls. “At midnight on the second day we collapsed in each other’s arms laughing, had a beer, and were super happy that we didn’t pause. I knew that if we did, this record would be dead. Momentum is everything when it comes to a recording project. We basically arranged to do the vocals from home and sent them out for John to mix them.

“There’s going to be a lot of COVID music coming out soon, or COVID-inspired isolation music, but this to me is not a COVID record. It was halfway through the recording that it threatened to destroy it. We saw that a lot of bands were deciding to take a pause and wait to put their records out. No offence, but I think that’s a fuckin’ loser attitude. Time is the most precious commodity, especially in rock ‘n’ roll.”

Bentham and McGill loaded up on a family size box of pizza pockets and some coffee and spent two or three hours on each song. Once they were done, McGill would hit the spacebar and go out for a cigarette. When Bentham had listened through, they started in on the next one. “By the end we were shells of human beings,” he remembers, almost fondly.

But they were able to get the job done because, by accident rather than design, the Dirty Nil’s whole operation lends itself to such an examination. Hailing from Hamilton, Ontario the band, completed by bassist Ross Miller and drummer Kyle Fisher, spend hours, days, months mulling over each song. The kinetic, eye-bulging energy of their records, which fuse punk grit with stadium rock melodic acrobatics, is not off the cuff.

“We have a tiny jam space and we will argue for a year, and laugh, and bash away, until it sounds good in a concrete box with a blown out PA system before we solicit the help of anyone else,” Bentham says. “We will do our dirty work ourselves. There’s a modern trend of producers having an overarching role in that, where the songwriter will show up with an idea and the producer will help them build that in the studio.

“That causes less fighting and stand offs and all that shit, but I really think that you miss the opportunity to craft a moment and have the sweet satisfaction that you did it yourselves as a team. That’s not a knock on anybody, but that’s a sacred aspect of our process that I’ll never let go of as long as I live.” 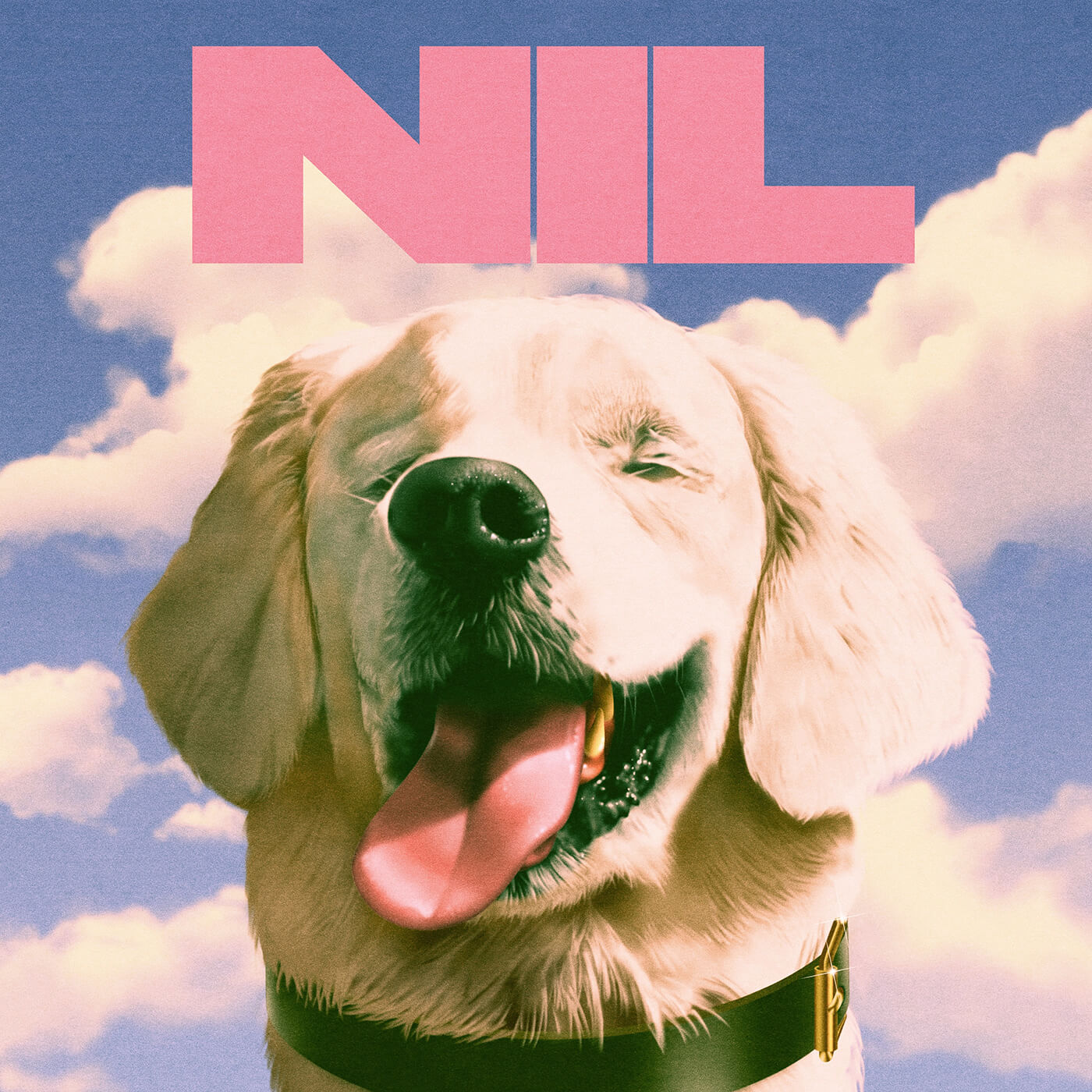 Bentham spent roughly a week capturing the guitars on Master Volume, experimenting with different setups including a Tweed Deluxe that he recorded while wailing in the room with it, but that sort of sonic navel gazing went out of the window for Fuck Art. From the Slayer-aping opening riff of Doom Boy onwards, the Dirty Nil lock into a clear-eyed evocation of their sound: uber-hooky jams served with shit-eating grins.

Bentham has been a Gibson guy since trading his Squier Strat for a Raw Power Les Paul Standard when he was 13, and here he put his prized “beat to hell” 1975 Les Paul Custom to work for most of the record. “It’s actually a very bright sounding guitar, I really, really love it,” he says. “It’s my favourite in the world.”

Fitted with DiMarzio Super Distortion pickups, it worked in tandem with an ES-335 and Les Paul Junior through a vintage RAT into a couple of Marshall Super Leads and, at times, a Vox AC30. “We did not have any time to fuck around,” Bentham adds. “It just needed to be executed. At first, I was bummed that I didn’t have that leisurely enjoyment of getting to track the guitars that I’d been working on for a year. But I really think they benefited from not being precious, just playing what I play through my rig, really dimed out.

“The only other special sauce ingredient was my Gibson J-200. It’s got a really weak, shitty pickup in it. I plugged that into an old fuzz tube preamp and a Deluxe Reverb, and I used that on The Guy Who Stole My Bike and One More And The Bill. I put it into an open tuning and just hit it in the verses. It has this ghostly feedback sound. I learned on the last record to put a little bit of acoustic over some things for texture. I think it’s also on Elvis ’77, where I also played the first bit of slide I’ve ever played in my life, which was hilarious.” 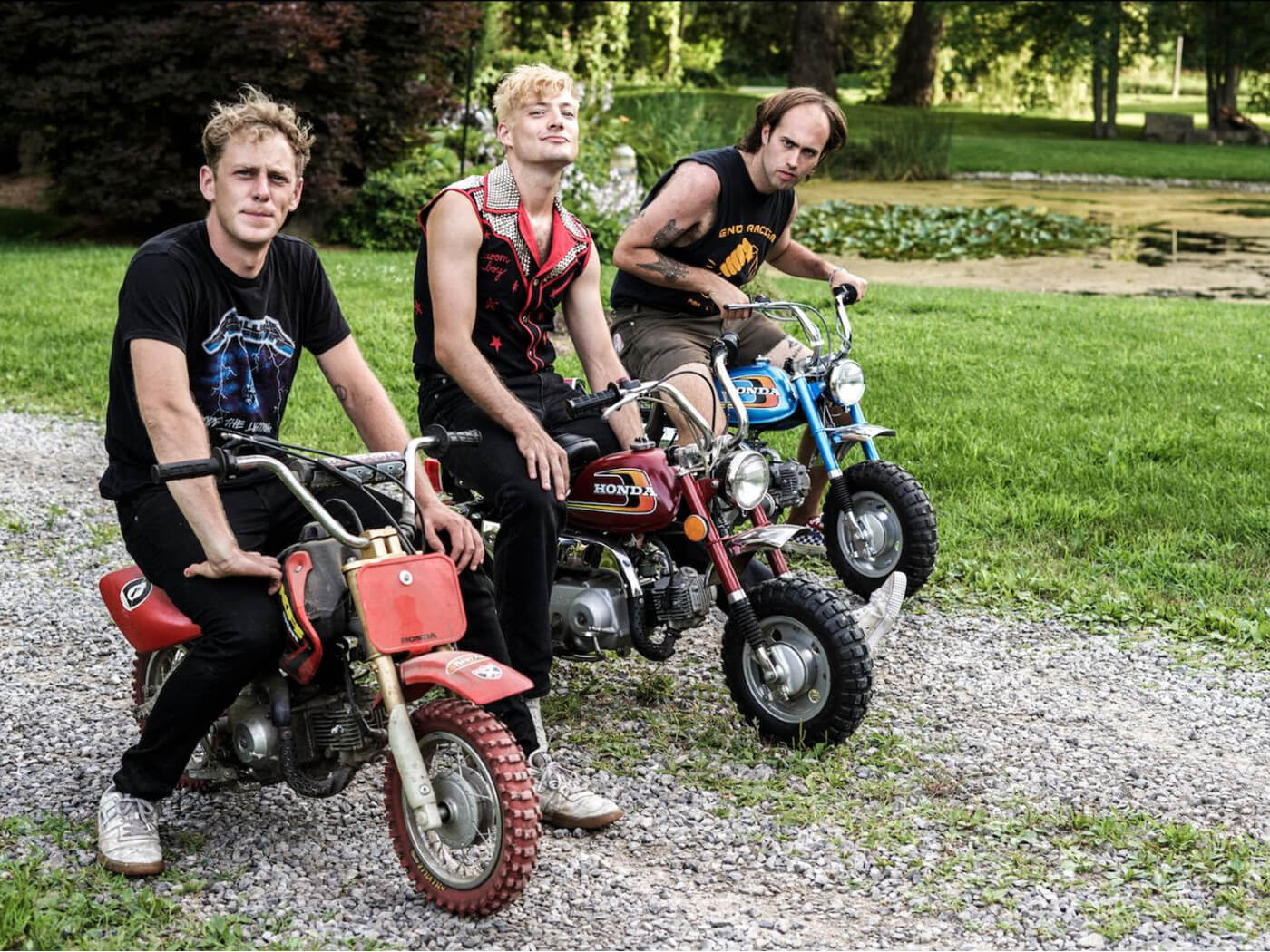 The Dirty Nil are a classic power trio and Bentham’s style splits the difference between several of his early idols, blending the muscularity of Pete Townshend and volume of J. Mascis with James Williamson’s ability to find pockets of space and fill them with pyrotechnic mayhem. Songs such as Friends in the Sky, from their crushingly good 2016 debut Higher Power, fall firmly into Bob Mould’s wheelhouse as hyper-melodic lead lines blend in with chugging rhythm parts.

“If I’m being totally honest I usually don’t get along very well with other guitar players,” Bentham laughs. “That’s why we only have one. I use open G tuning a lot of the time because you can hold down a rhythm and do a little lead within it and have the best of both worlds. We arrange a song for it to be played live, and then be recorded. That’s how we approach things. When I was a kid, I’d hear recordings I’d be like, ‘This band’s sick!’ and I’d go watch a video of them live and be like, ‘Well, this sucks!’ They couldn’t do it live. I’m not totally to the letter, but I definitely try to keep it 95 per cent reproducible live and five per cent fun in the studio to add some fairy dust.”

After having his head turned by Nirvana’s final recording, You Know You’re Right as a young kid, Bentham grew up being disappointed by apparently canonical bands on YouTube. But in each new letdown he found that the things he loved about rock ‘n’ roll only became more entrenched. “There was a big classic rock renaissance in the early 2000s, and people were talking about Cream and all these bands,” he says. “I’d watch a video of Cream and I’m like, ‘This fuckin’ sucks. They’re just standing there.’ Then I’d flip on The Who at the Rock & Roll Circus and they’re smashing shit and having fun. There’s a mischief to it. That became the blueprint for our band: having fun and creating chaos.”

Over time, the Dirty Nil have bought into this ethos more openly. Pre-Higher Power their punk streak was a little wider (they even put out a 7-inch on Fat Mike’s punk-centric imprint Fat Wreck Chords) and former bassist Dave Nardi (who now plays with Daniel Romano’s supreme band the Outfit) balanced out Bentham’s more outré rock stylings with 30-second hardcore freakouts. Back then Bentham still wore a star-spangled denim shirt on stage, blowing bubble gum masterworks while ripping solos, but in recent Fuck Art promos he’s gone one step further and ditched the sleeves. It appears he’s reaching his final form, somewhere between Paul Westerberg and Ace Frehley.

“Bands like the Replacements really showed us that you could play with stadium rock cheese and still love it, and not give a shit about what anyone thought about it,” he says. “In our early career we were trying to be cool, but by the time we were in our mid-20s we were like, ‘Fuck what anybody thinks. Let’s just do what we think is cool.’ Sometimes that involves some Ace Frehley bullshit and sometimes that involves Fugazi madness.”

On many levels Fuck Art is a serious record. Lyrically it deals with the ennui of ageing, performative wellness on social media and busted relationships. But it does so by making these things sound like a total blast. The Dirty Nil have sweated, bickered and fought to make something that thrashes from the speakers like the best stadium rock record you’ve ever heard played by a snotty, obnoxious punk band. “I’m 30 years old and we’ve done this a lot,” Bentham says. “We’re very lucky to get to choose what thing is going to drive us nuts. And that thing’s rock ‘n’ roll.”

The Dirty Nil’s Fuck Art is out on 1 January through Dine Alone Records.