“This record feels like a progression into a new territory”: Metz on Atlas Vending

On their fourth long player, the band double down on the harmony and colour they achieved previously and deliver their most compelling and visceral work to date.

“Change is inevitable if you’re lucky,” according to Metz frontman and principal songwriter Alex Edkins. And there’s no doubt that the music composed by the Toronto trio is difficult to pin to a specific genre, constantly moving, growing and changing with each album. So, does this make him one of the lucky ones?

“I think what I was trying to say is when you’ve been working with the same people for as long as we have and you’ve been doing music together, it’s easy to get stuck in conventions and ruts and not progress,” he reveals. “I think this record, more than any for us, is something that feels like a really nice progression into new territory. It’s still very much us. We didn’t intentionally set out to change who we are or what we sound like, but I think the production and the songwriting have taken it to a new spot that we’re really proud of.”

Despite being written and recorded prior to the global pandemic, Atlas Vending feels immediate in its response to 2020, clearly poised to attack its themes of social anxiety, isolation and paranoia caused by modern media head on. “Songs like Pulse, and songs like The Mirror, are just so connected to how I’m feeling right now,” Edkins admits, coyly. “It’s [COVID-19] truly shifting the meaning of a lot of the songs for me at least, and I don’t know how people will perceive it. But that’s kind of all you hope, that people take it in, they work it through their situation and maybe it will connect to where they’re at.”

Indeed, the 10 songs that span the band’s fourth LP offer a glimpse of the ills of over-consumption of social media and the psychological issues it can lead to. The aforementioned album opener, Pulse, is a true exercise in tension and release, perfectly setting up the album for its journey on through the blinding dissonance heard on Blind Youth Industrial Park, centred around a menacing descending guitar riff. Whether it’s the remorseless drive of No Ceiling – which still manages to lean on Edkins pop sensibilities – or the album’s magnum opus, the almost eight-minute long A Boat To Drown In, Metz are increasingly adept at conveying propulsive rhythms, bloody-fingered riffs and consistent, channel-peaking distortion. There remains an oft-forgotten musicality amongst all this, which some bands spend years trying to achieve, or end up switching genres entirely in the pursuit of commercial acceptance.

The value of experience

Atlas Vending is acutely mature in its craft, particularly in a genre that can often be considered a young man’s game. “I think for people who don’t see abrasive or underground music the same way we do, which is like an art form or craft, I absolutely agree that 99 per cent of them would be like, ‘Well that sounds pretty immature,’ but we’ve always seen bands like Hüsker Dü or Fugazi as artists of the highest order!

“We come from that school of thought where if you can approach anything with craft and care, and real emotion and honesty, I think it will have value and it doesn’t really matter what the perceived tropes of that genre are. For us we’ve always just wanted to make impactful and important music to us.”

It’s unquestionably impactful, and there’s no yielding to complacency either. Aiming to create a more patient and honest record, Edkins, drummer Hayden Menzies and bass player Chris Slorach agreed that the best course of action was to just follow their musical intuition. “It’s a matter of just following your gut and going, ‘Does this do anything for me?’ I think our love of music is quite varied, it’s far reaching. No Ceiling is Buzzcocks-inspired, whereas Pulse is Suicide-inspired. Those are different worlds, but they’re worlds that I think we embrace and love.” 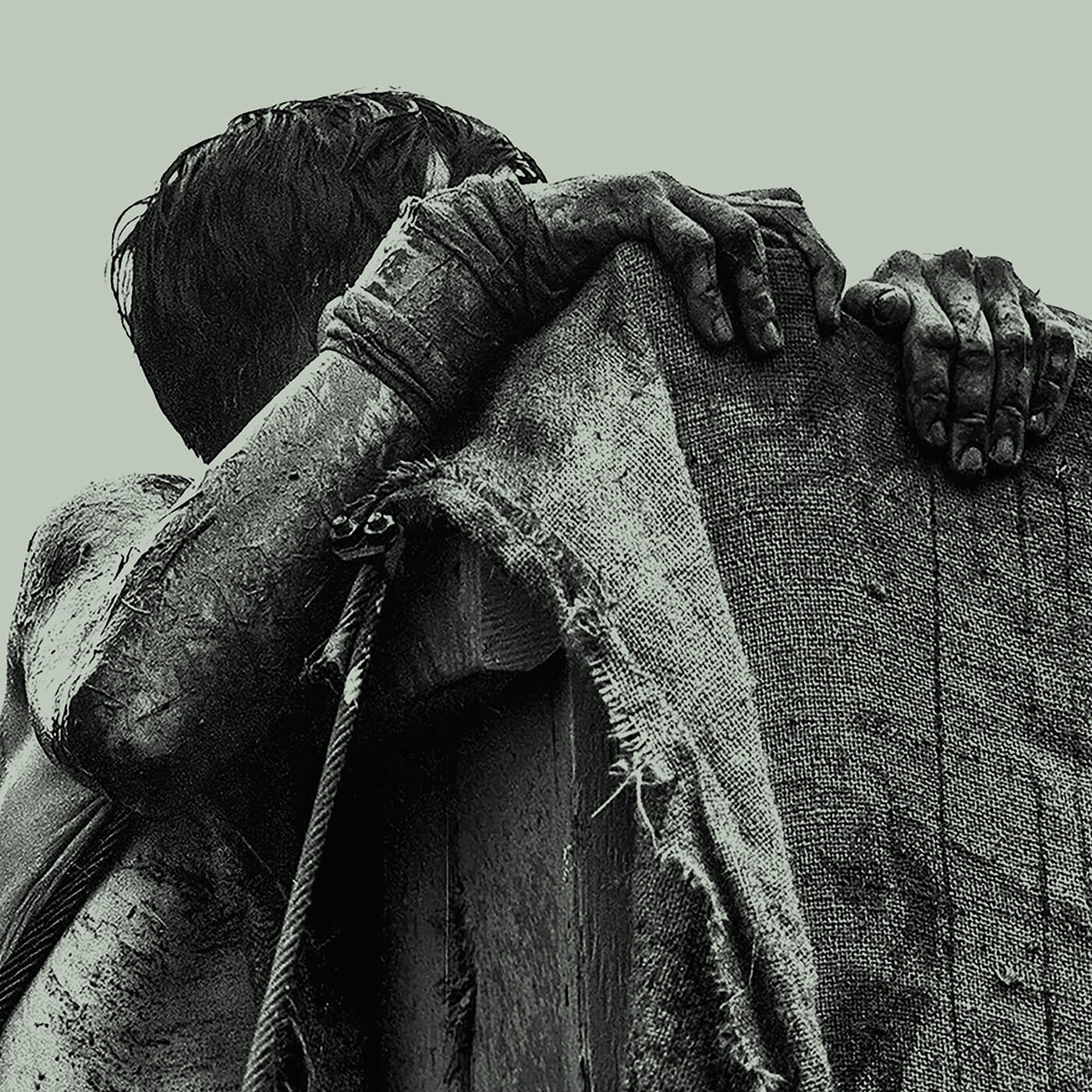 Though they conceived the album through their collective love of thrashy, guitar-orientated underground bands of yesteryear, Edkins acknowledges that the most important aspect of structuring the long player was ensuring it steadily progressed to a natural conclusion. “I think the key to a record that has varied songs is the sequencing and I definitely approached the sequencing of this record like telling a story. A Boat To Drown In is definitely the ‘riding-off-into-the-sunset’ and escaping this anxiety riddled world that the record takes place in, and follows that character. So, I think it from Pulse out to Boat, it’s like a roller coaster but also a linear narrative. It was never intended to be conceptual, but the way I sequenced it, I think it does that for me. It does take me on a bit of a trip.”

On their previous album, Strange Peace, the three-piece worked with the esteemed Steve Albini, famed for his work on Nirvana’s In Utero and Pixies’ Surfer Rosa, but opted to forgo loyalties this time around and enrol Ben Greenberg of Uniform as the man in the chair. So, as a member of such a heavy band, was his contribution similar to that of Albini? “Oddly enough, coming from such a heavy band, what he what he brought was levity.

“He’s just this this ball of energy. He has a deep love for all music and he brought a looseness and level of fun to it that was totally necessary. I think Chris, Hayden and I, we can get tense and we can also make it so it’s absolutely no fun whatsoever. [laughs] We take it too seriously. With Ben it was nothing but fun.”

Given Edkins well-drilled arrangements and pre-planned album sequence, there was no need for any additional writing sessions during studio time, no squabbles over extra choruses, allowing the band to focus on the sonic explorations and complexities of Atlas Vending. “We managed to have a lot of fun and even explore more sonically than we did with Steve, because that’s not really a part of the deal.

“He’s very much like, ‘I’m going to push record, you’re going to play, and my mics are gonna be placed perfectly. It’s gonna sound wonderful; I don’t really want to chat about whether or not there should be a middle eight here.’ I totally respect that approach and I have a lot of good memories and takeaways from that experience with Steve. I also really love this, the making of Atlas Vending, because it was the complete opposite.”

Commonly regarded as a power trio, emphasis on the word power here, Metz are rightly applauded for their minimal use of excessive equipment in a live setting, whilst still ensuring they sound absolutely humongous. Edkins is an ardent user of Fender Jazzmasters, particularly his beloved 1962 variant, but chose to branch out on album number four with a motley of good and great results. “There was a whole slew of guitars on this record, but I went into it for the first time ever wanting to write two distinct guitar lines for each song that intertwine and have them be played on different guitars on different rigs, to give another layer of texture.

“I focused on my pride and joy, my ‘62 Jazzmaster that’s played basically every Metz gig ever, but I rolled down the saturation. I use a Twin Reverb and then crunch it with a Turbo Rat, which is basically as uncool as it gets,” he begrudgingly concedes.

“That was one of the guitars in the blend for every song, and then I purchased a Ricky 330 that I’d been lusting after for years. That makes an appearance on a lot of the songs too, for instance on No Ceiling, it’s in there with some chorus.”

Despite the somewhat conventional, albeit vintage inspired, guitar choices on the record, the band were definitely unafraid of pushing their collective boundaries and using the studio as a tool in their guitar takes. “The second guitar in each song was usually a toss-up. I often used Ben’s Dan Armstrong, or sometimes we’d put a contact mic on an acoustic guitar and distort it through a compressor. Shit like that! We did a lot of fun stuff with guitars.”

Whilst previous Metz albums have been dogged in their display of abrasion and visceral riffery, Atlas Vending sees the band dig deeper into their songwriting capabilities, combining both the colour and harmony of their previous album with the exhilarating bludgeoning’s of their live shows. Both articulate and bold, it’s an album with a certified narrative and requires numerous listens. It could very well be their most dynamic and important body of work to date.

Atlas Vending is out now on Sub Pop.