The revered luthier studied under the tutelage of Ervin Somogyi, developing into one of the most in-demand builders in the world today. Here he discusses selling all his possessions to study abroad and developing a close relationship with every customer. 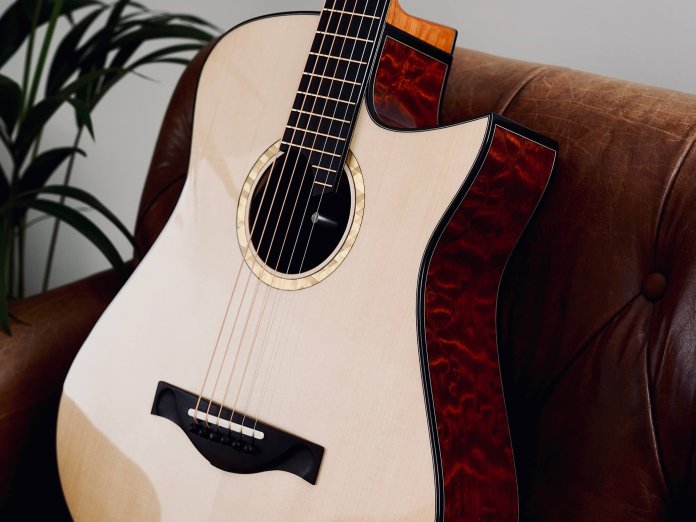 What first drew you to acoustic guitars?

“It’s a long and convoluted story which features many pivotal characters. I expect when they make my biopic, Peter Jackson will be involved. *Spoiler Alert* – I’d reached a bit of a dead end in my career as a furniture maker, or rather I found myself in the position whereby my passion for making, my reason for being had slowly been evaporating.”

“I decided I needed to get my mojo back and this involved going on a pilgrimage of sorts. I wrote to artists, makers and designers all over the world asking if I could spend some time with them in their studios and workshops. Ervin Somogyi responded with the offer of an interview. (This will be the part in the movie where I’m chopping down trees in the Russian Tundra, painting fences and raising X-Wings  from swamps.)” 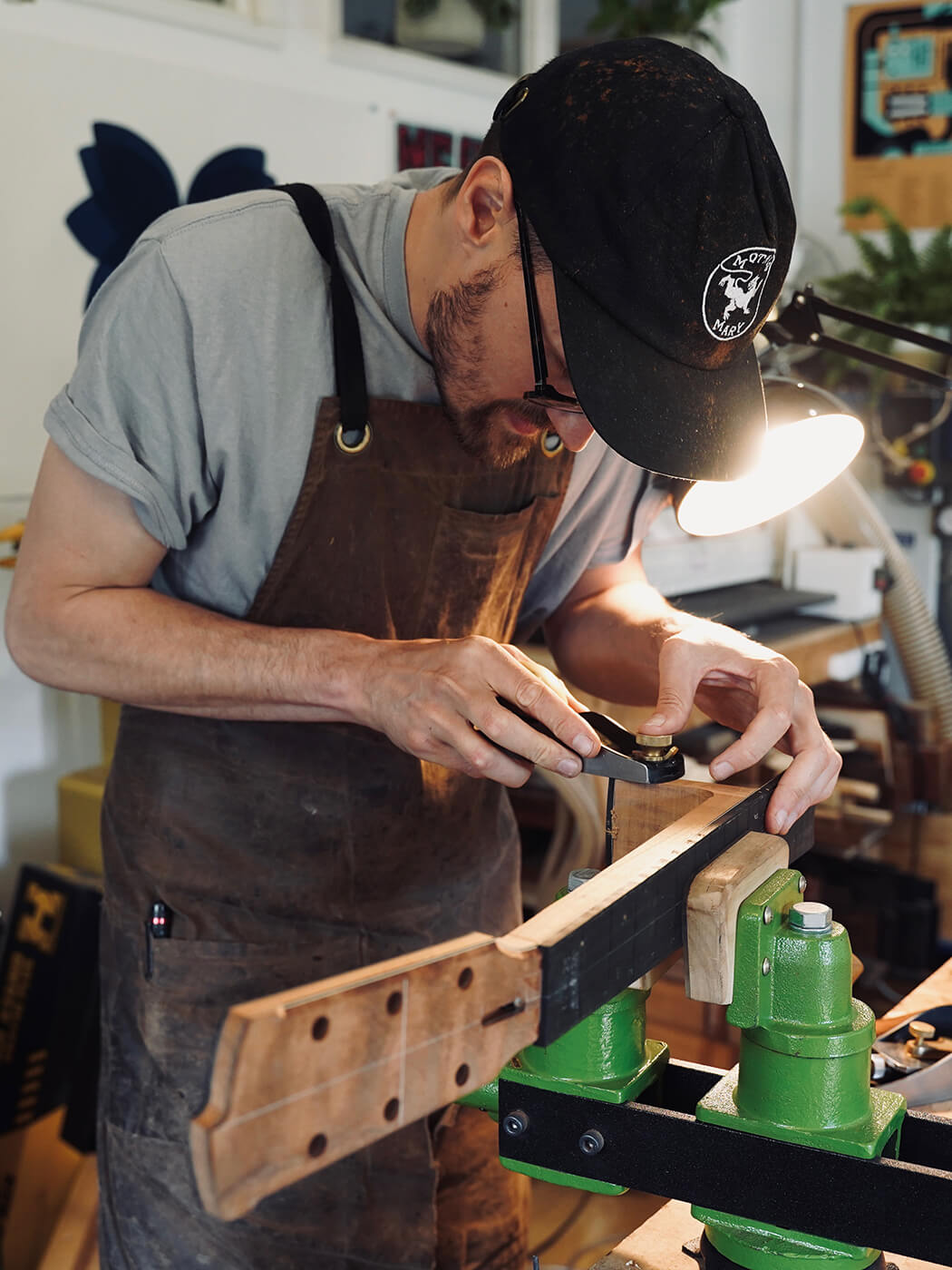 What impact did Ervin Somogyi have on your development as a builder?

“Ervin reignited my creativity and my critical thinking. For me, that was everything I had been searching for.” 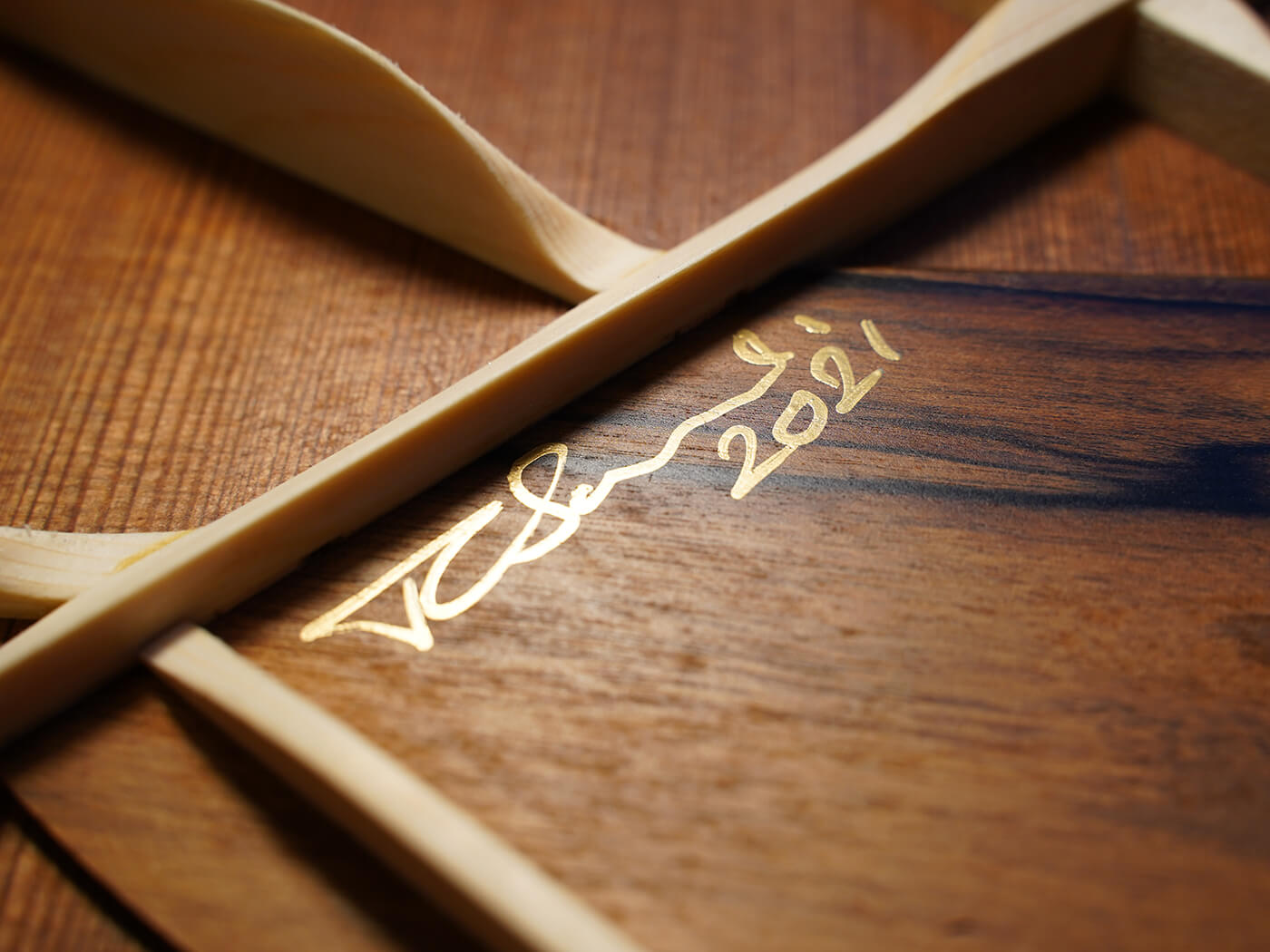 You’ve mentioned your background in luxury furniture building, and you also studied at the Glasgow School of Art. How does your knowledge of the art world influence your luthiery?

“I think it allows me to come at the work from a different perspective. I’m not buried in the tradition of the instrument, and I feel free to play around with materials, colours, textures and techniques. I love looking at contemporary product design and wondering how I can apply that design language to the acoustic guitar.” 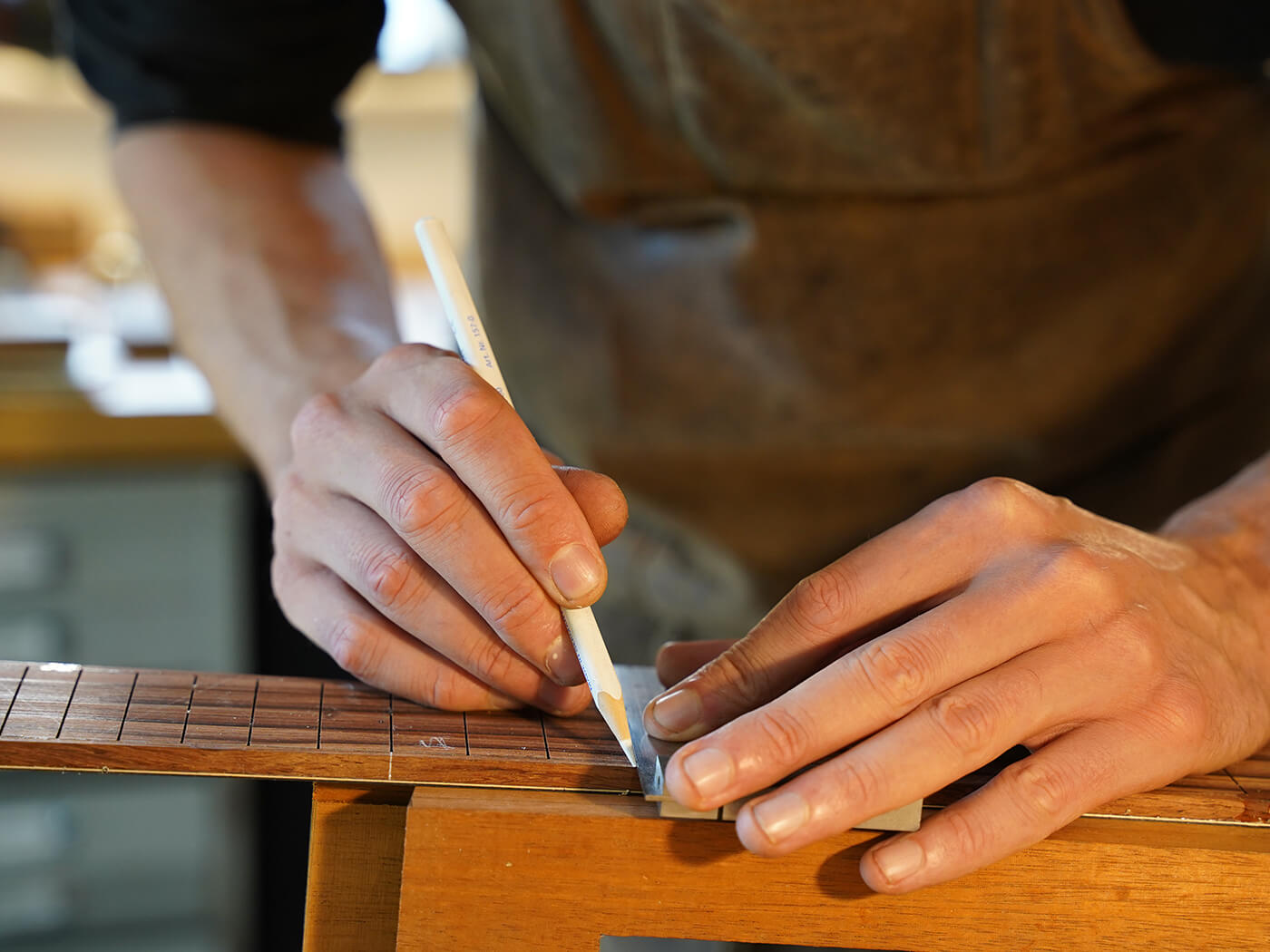 There are three models – the S, M, and L – as the basis of your catalogue. Why did you choose to avoid standard acoustic model names and revert to simpler choices?

“Honestly, I found the commonly used Martin naming conventions confusing and often misleading. Unless you’re completely familiar with the nuances of scale lengths and the number of frets to the body etc, terms like 000 and OM become meaningless. Like, when was the last time you saw someone playing acoustic guitar in an orchestra? I’d played around with cool sounding model names like ‘Blade’, ‘Laser’ and ‘Blazer’ but ultimately settled on Small, Medium and Large.” 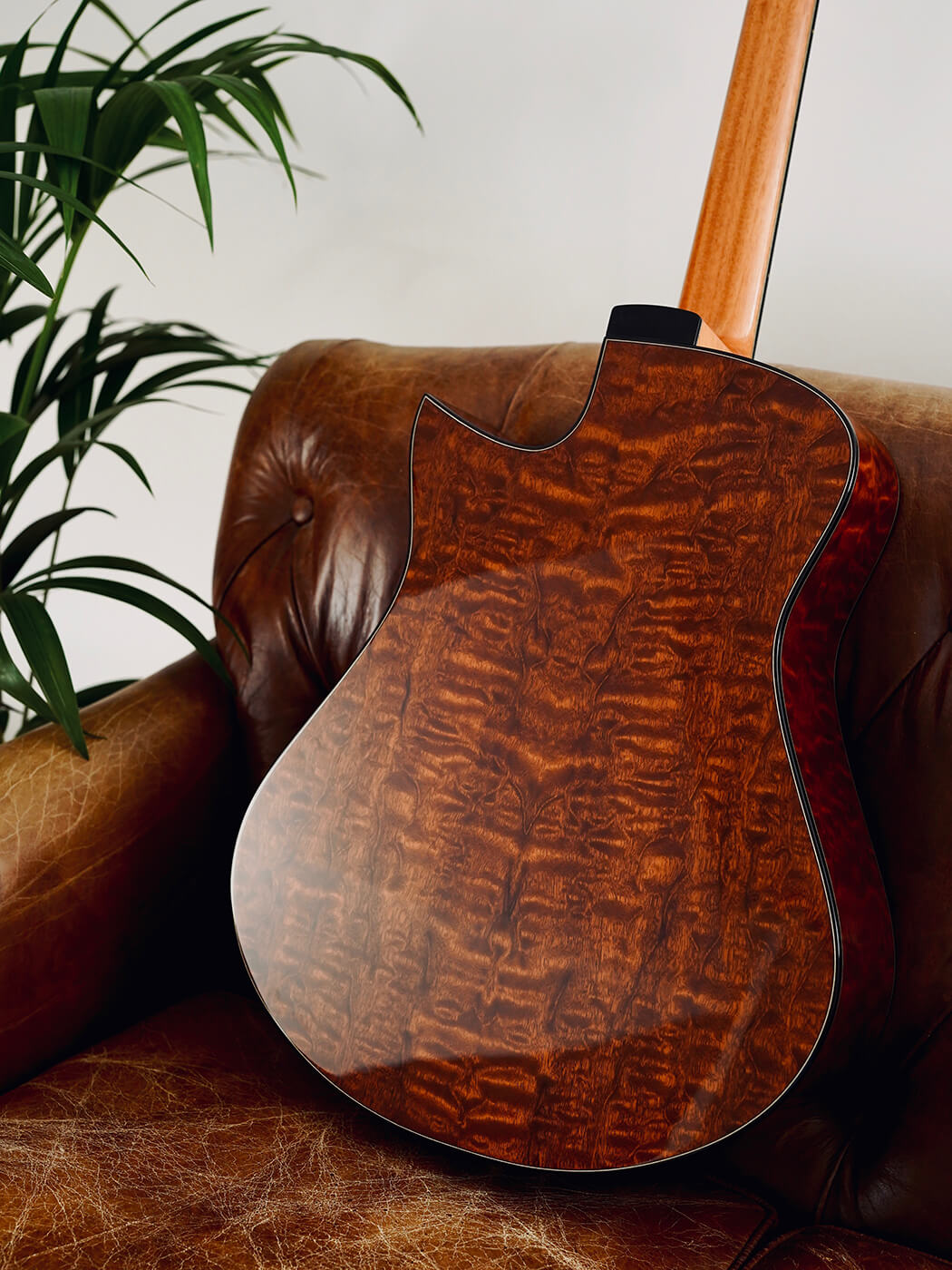 Each of the three models listed above are endlessly customisable. Is this ‘contemporary’ approach a way of connecting with the modern guitar buyer?

“It’s become a bit of a personal cliche at this point, but I always say that a great guitar starts with a great relationship. My clients are spread across the world from different cultures. There isn’t one demographic I’m trying to target. Ultimately, they’re   all people that are passionate about guitar and that’s something we share and can form a bond over. That bond is crucial because the gestation period between the first email hitting my inbox and delivery day isn’t exactly short. There’s a journey of discovery we go on together and a shared language we have to develop to arrive at a successful guitar. A custom guitar is such a personal, esoteric, intimate item and the best ones always come out of a friendship.” 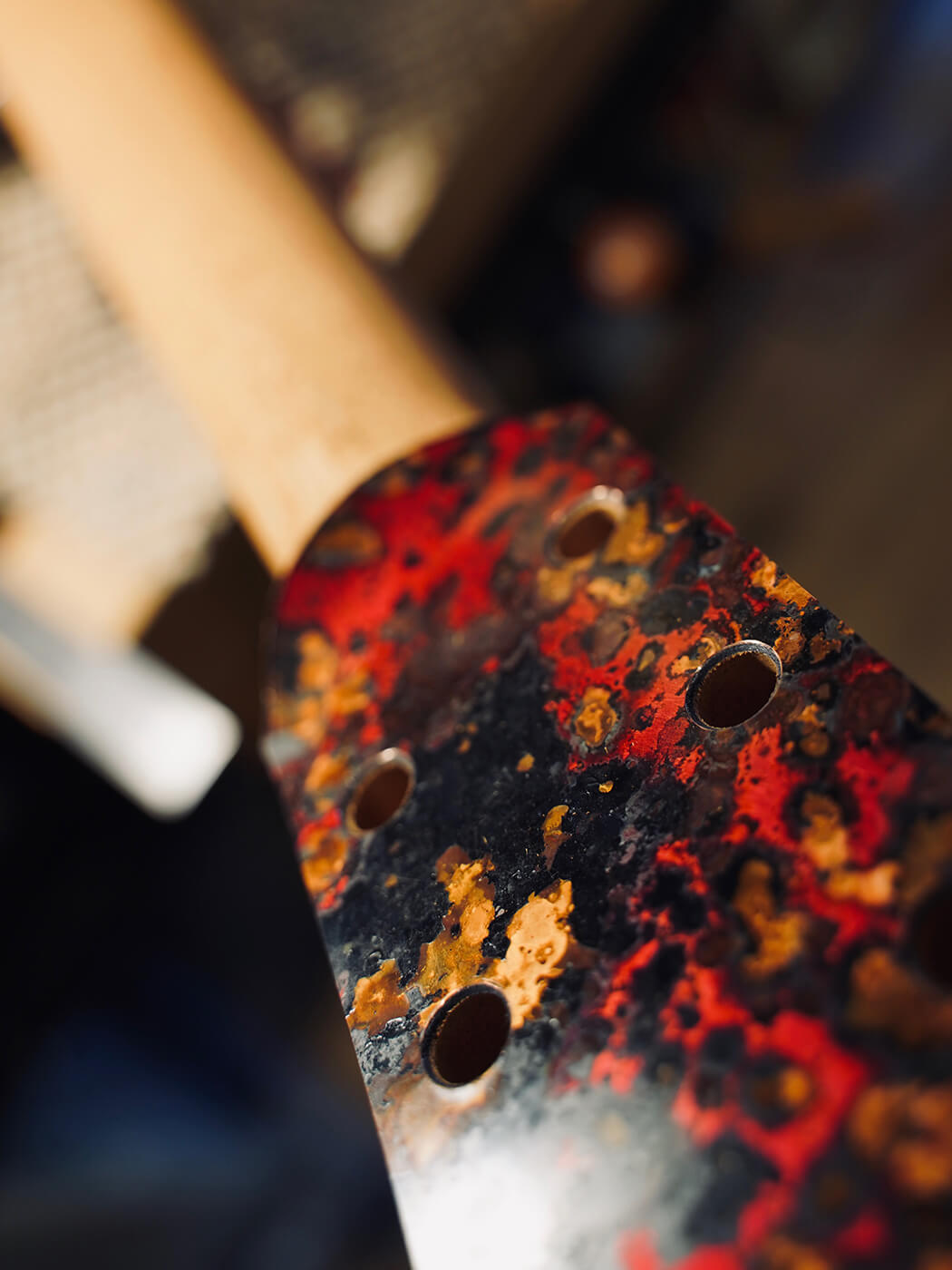 There are some intriguing materials used for rosettes and headcaps too, such as patinated copper. Why are you using materials like this?

“It started during my apprenticeship. If you’re familiar with Ervin’s work, it’s extremely artistic and expressive. There’s loads of amazing inlays, carvings, and embellishments. In the early part of my time in Oakland, I tried to emulate this style. Two things hit me pretty quickly. One, I’m far too impatient for this kind of detail work. Two, I’m really, really bad at it. So, I went back to my basic principles of design and focused in on materials and allowed them to do the talking. The natural beauty, the colours and textures of the copper could say more than I ever could with thousands of joints.” 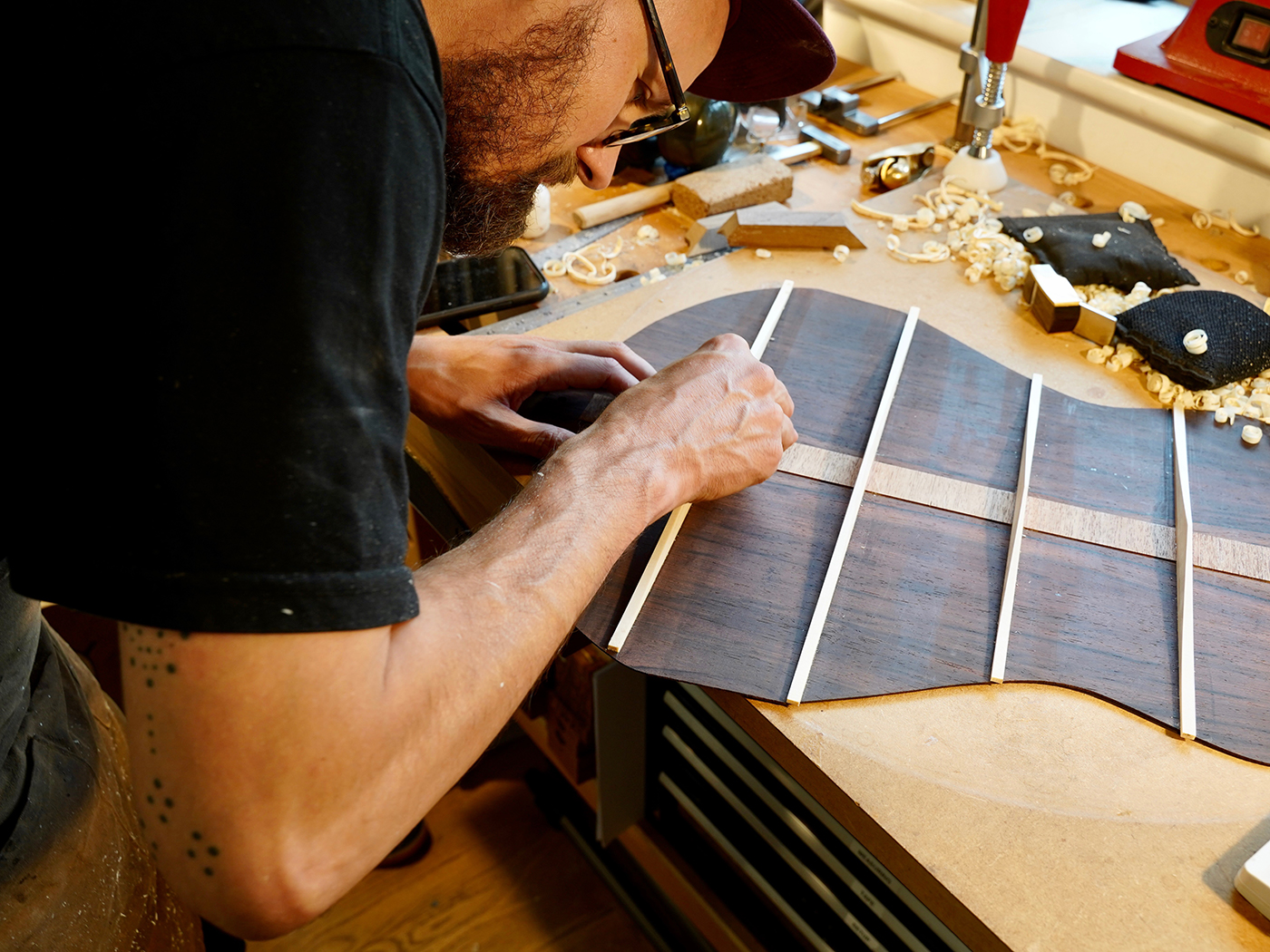 “When I could buy a fish burrito AND a drink from the Mexican restaurant across the street from Ervin’s workshop without having panic attack. I was very fortunate in that a now dear friend discovered my work pretty much straight out of the gate. He commissioned me to build a guitar, which I did, during my evening and weekends at the Somogyi shop. I fell in love with the whole process of working with a client, I’d found my mojo and there was no turning back. As long as I had enough money for rent and the occasional cocktail, I wasn’t ever going to do anything else.” 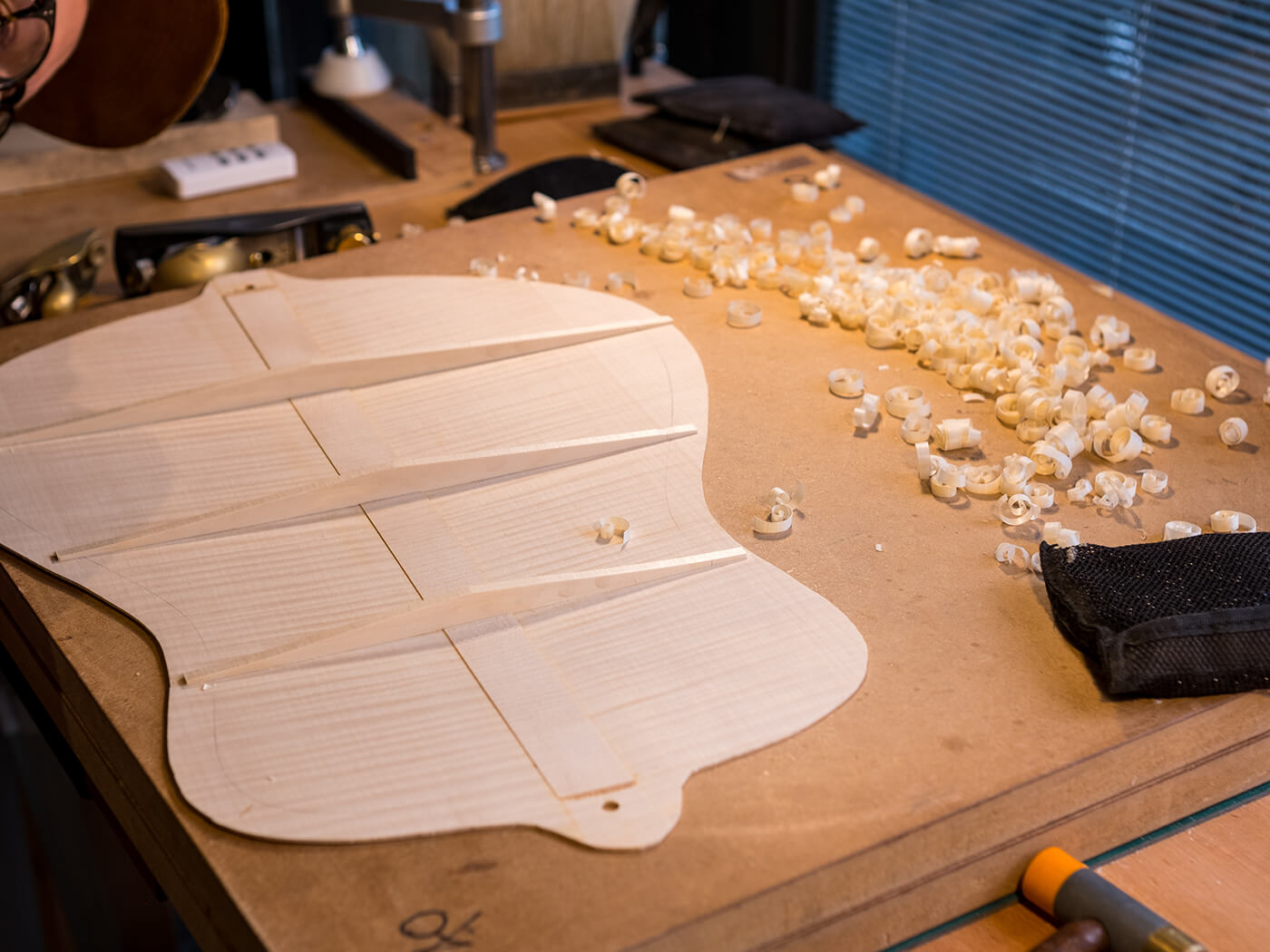 “I did. My apprenticeship was paid in kind so to speak, and as The Bay Area has the highest cost of living in the US, I didn’t have savings of note and so I had to seek financial assistance. A friend told me about The Queen Elizabeth Scholarship Trust, which is the charitable arm of the Royal Warrant Holders Association. Twice a year QEST awards funding to support British Craft. I was very fortunate to receive a scholarship which essentially paid for my first year’s study with Ervin. With that and selling everything I owned, I was all set.” 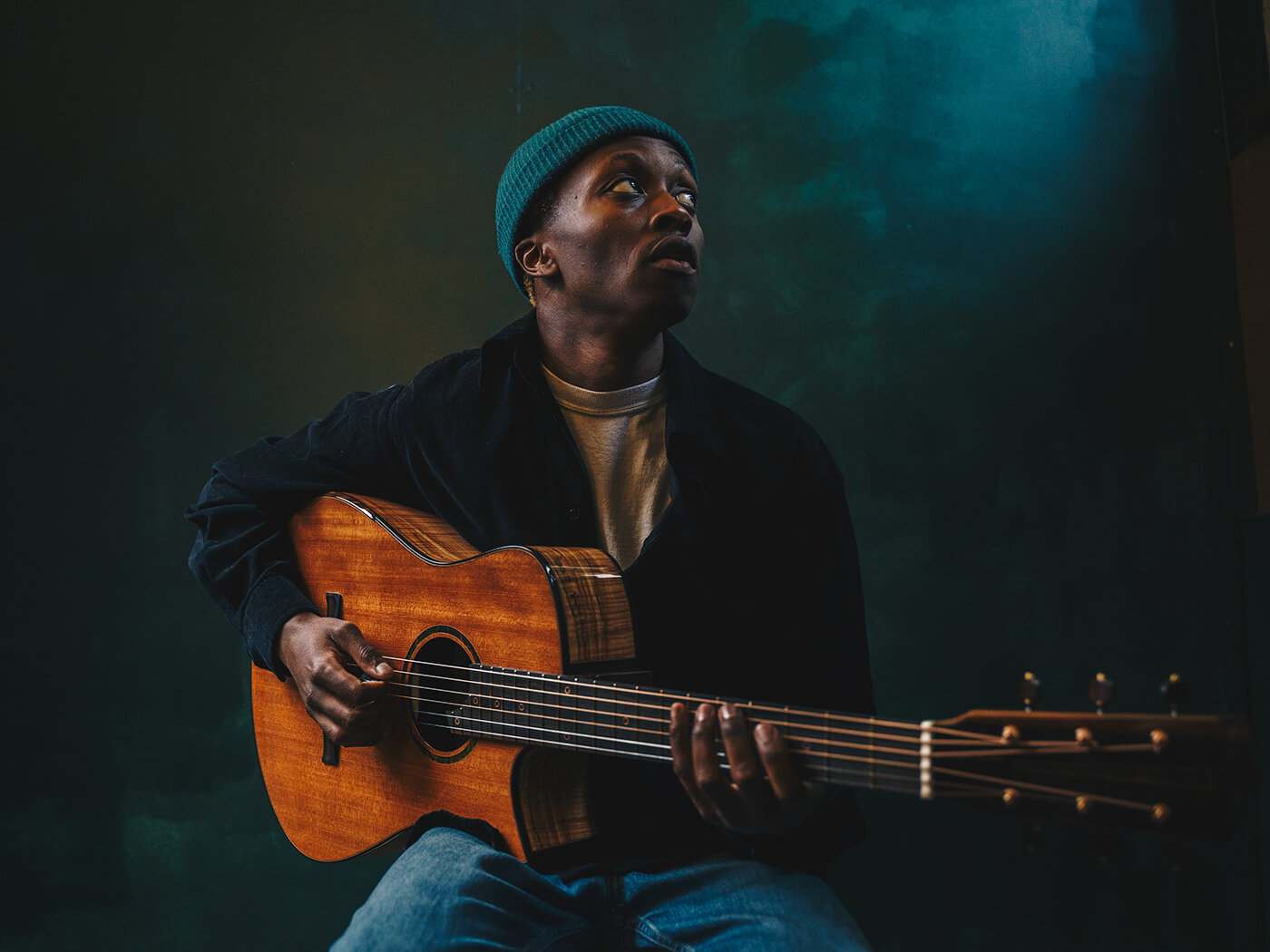 Elsewhere you’ve introduced ‘white label’ guitars, much like early LP pressings. How does this improve the specs and build quality of your instruments?

“I love to experiment, primarily to indulge my own curiosity. It keeps things fresh and exciting; you never truly know what you’re going to get. There’s an element of risk to this which honestly I get a kick out of. If I built the same guitar, day in day out, I’d get bored pretty quickly. Building in small quantities, by hand, with wood – it’s very difficult to beta test with any degree of certainty. There’s a huge amount to be said for experience and for developing an intuitive sense for how a material behaves.” 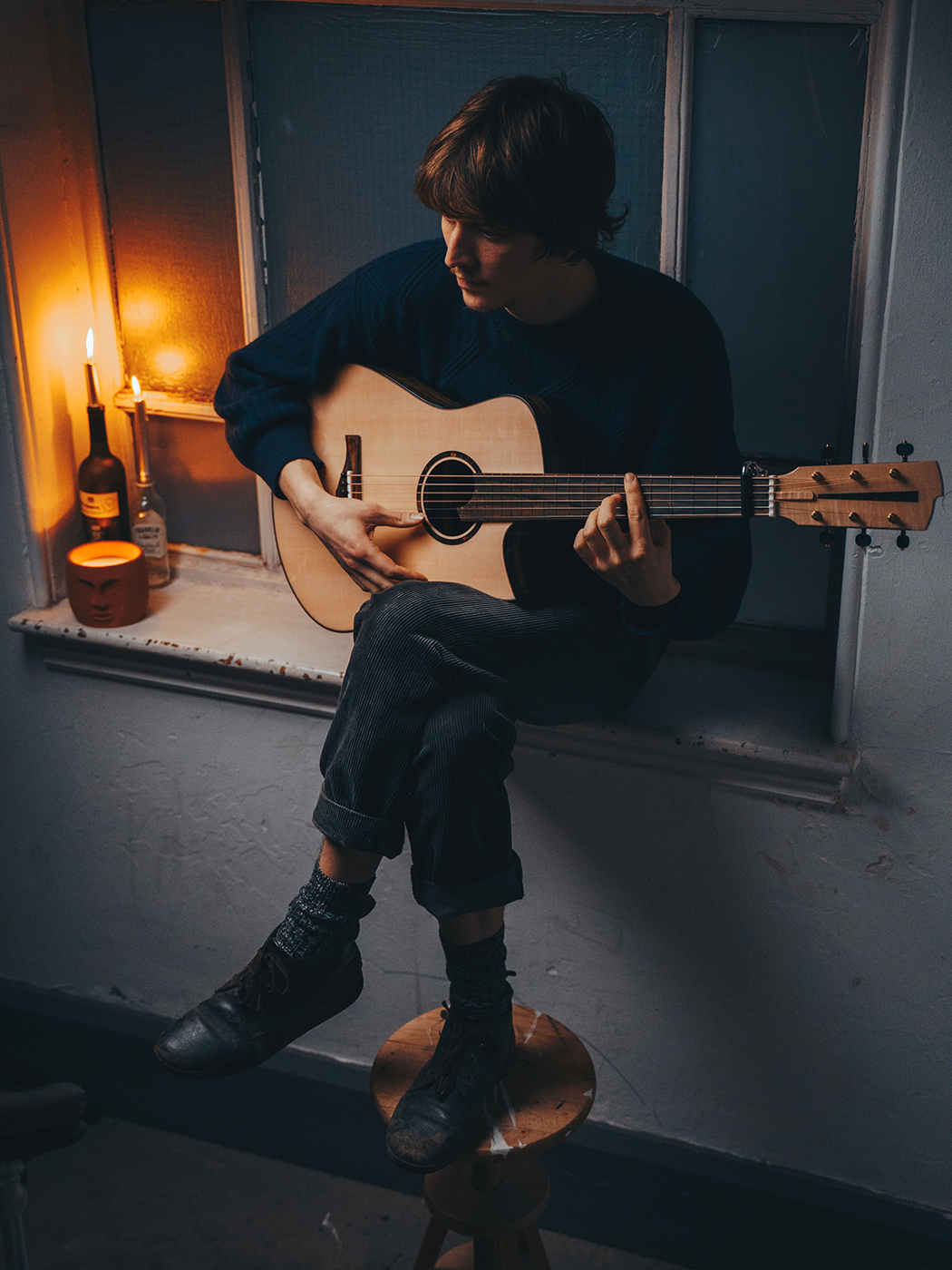 “I combine this with a huge amount of note taking, record keeping and handing the finished article off to players who really know how to get the most out of a guitar. Head of Bullshit Detection at Tom Sands Guitars is Will McNicol, he records every guitar I build, and we’ve even designed and composed the ultimate ‘guitar testing tune’ to draw out every nuance of an instruments character. My goal is always to be better than yesterday, to always keep pushing for that extra percentage point of improvement and incremental growth. Experimentation is at the core of this philosophy.” 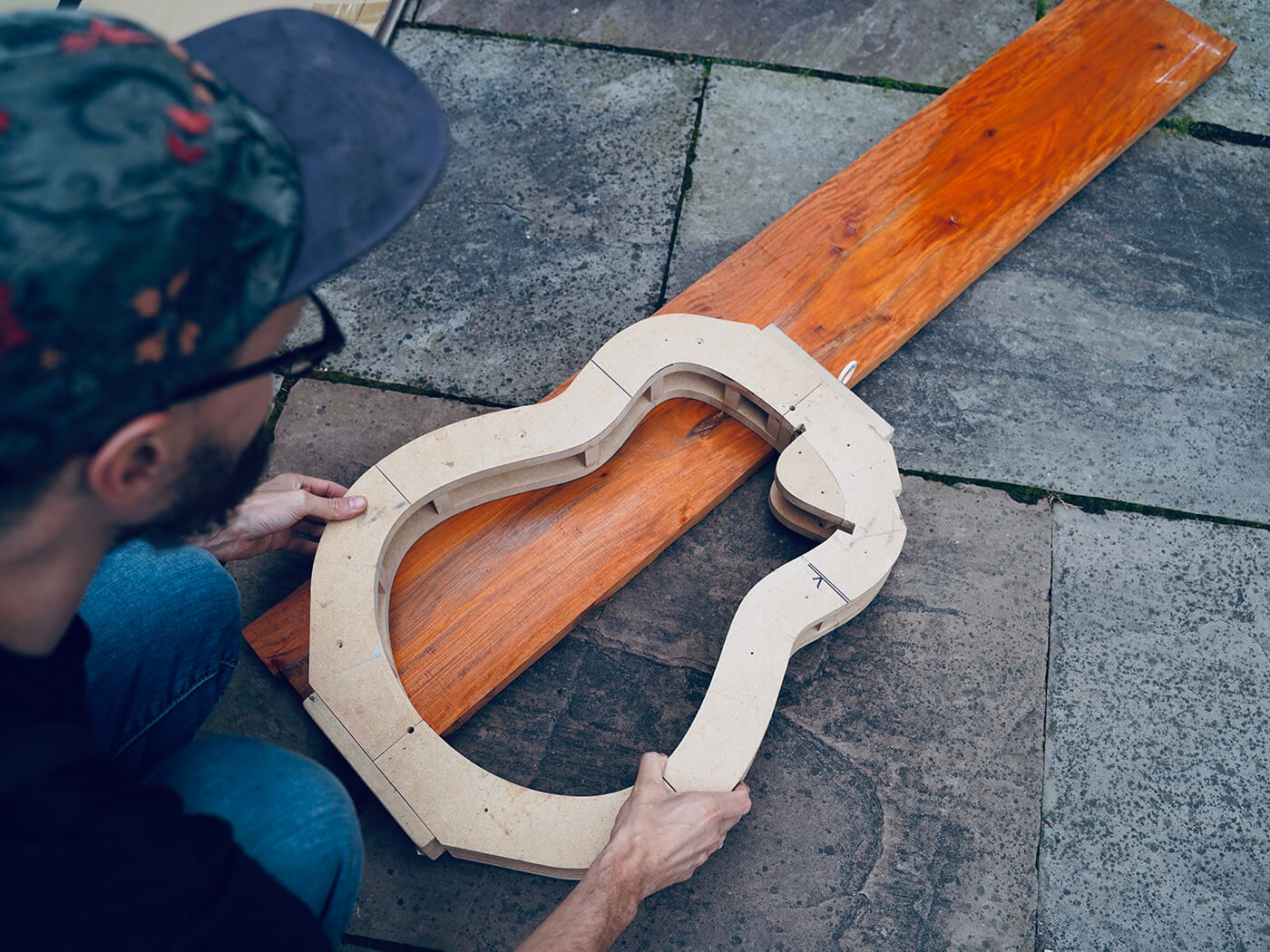 What does the future hold for Tom Sands Guitars?

“I feel like we’re emerging from the pandemic, blinking in the light but full of hope and excitement. This year I’m investing heavily in growing the business, we’ve just moved into a beautiful new space and my assistant Ted is doing amazing work. We have a whole host of White Label guitars making their way through production so you can expect to see some new features, woods and hopefully sounds too!”