Edmonton’s TunaTone is committed to pushing the boundaries of what short-scale instruments are capable of, but the creator of these exquisitely crafted instruments, Leila Sidi, isn’t even a guitar player. We meet an exciting but different type of luthier. 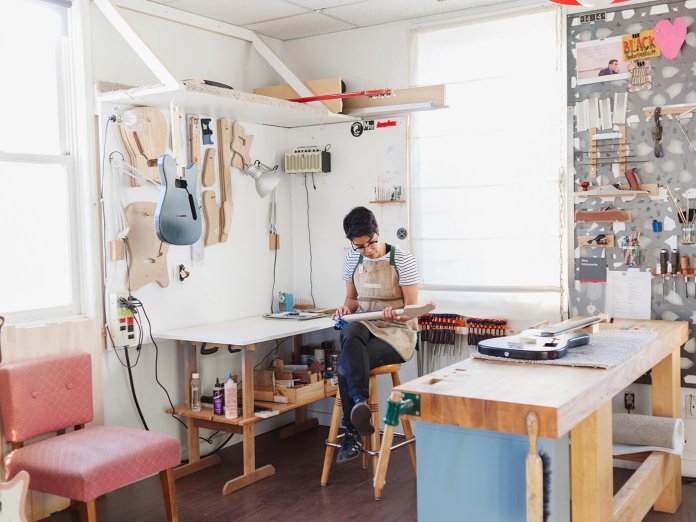 “I have yet to get into playing the guitar which feels a little strange, but I’ve come to learn it has given me a unique perspective as a designer and builder. I entered into the world of luthiery from woodworking; I was working with a furniture builder, Brad Goertz of Inside Passage School of Fine Woodwork, for a number of years before building my first guitar. When he moved on to other pursuits, I asked our shop mate and friend Dion James (Dion Guitars) if he would help me build an electric guitar. He graciously did, and I have been building guitars under his tutelage since.”

“I’ve been building guitars for nearly five years. My first instrument was a short-scale bass, a copy of a 1969 Fender Musicmaster. It was a beautiful instrument that also had inherent flaws that affected playability. My goal was to replicate the bass while improving upon the imperfections that were built into its design.

“I realised that building guitars had a level of complexity, detail and variety in process that I really liked and so I continued. My next guitar was a baritone, a gift to Dion for his mentorship. It was my first ground-up design that heavily informed my primary model, the TeenyTuna.” 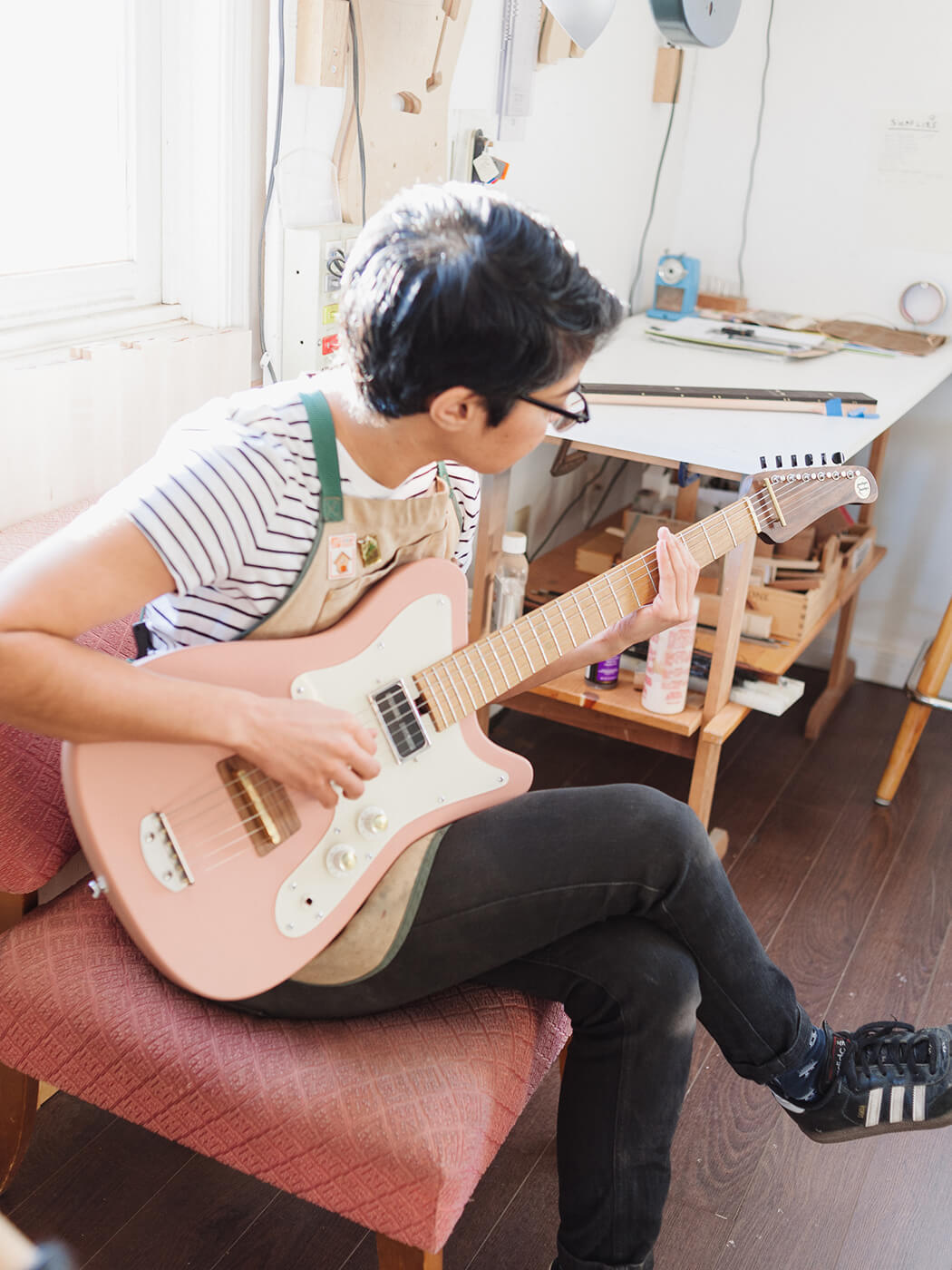 “Handmade guitars involve a lot of time, skill and labour and in an economic system that is based on mass production and constant consumption, it is hard to feel like hand-building instruments is a viable business model at all!

“But what I’ve found is that there are people, just like myself, who deeply value being let into the process. My clients are able to watch the build, know the person doing the work and trust that thoughtful decisions have been made every step of the way. As a result, people get to develop a uniquely special relationship to their instrument. My hope is that feeling of connection translates into how a person feels inspired to play.”

“I have built my business slowly and have self-funded it with my part-time job. I work as an occupational therapist in palliative care; I am a part of a wonderful team of healthcare providers who focus on comfort and quality of life for people at the end of their lives. It is meaningful work for me, and I feel honoured to be able to do it. My background in occupational therapy has certainly informed the ways that I design guitars with ergonomics in mind.” 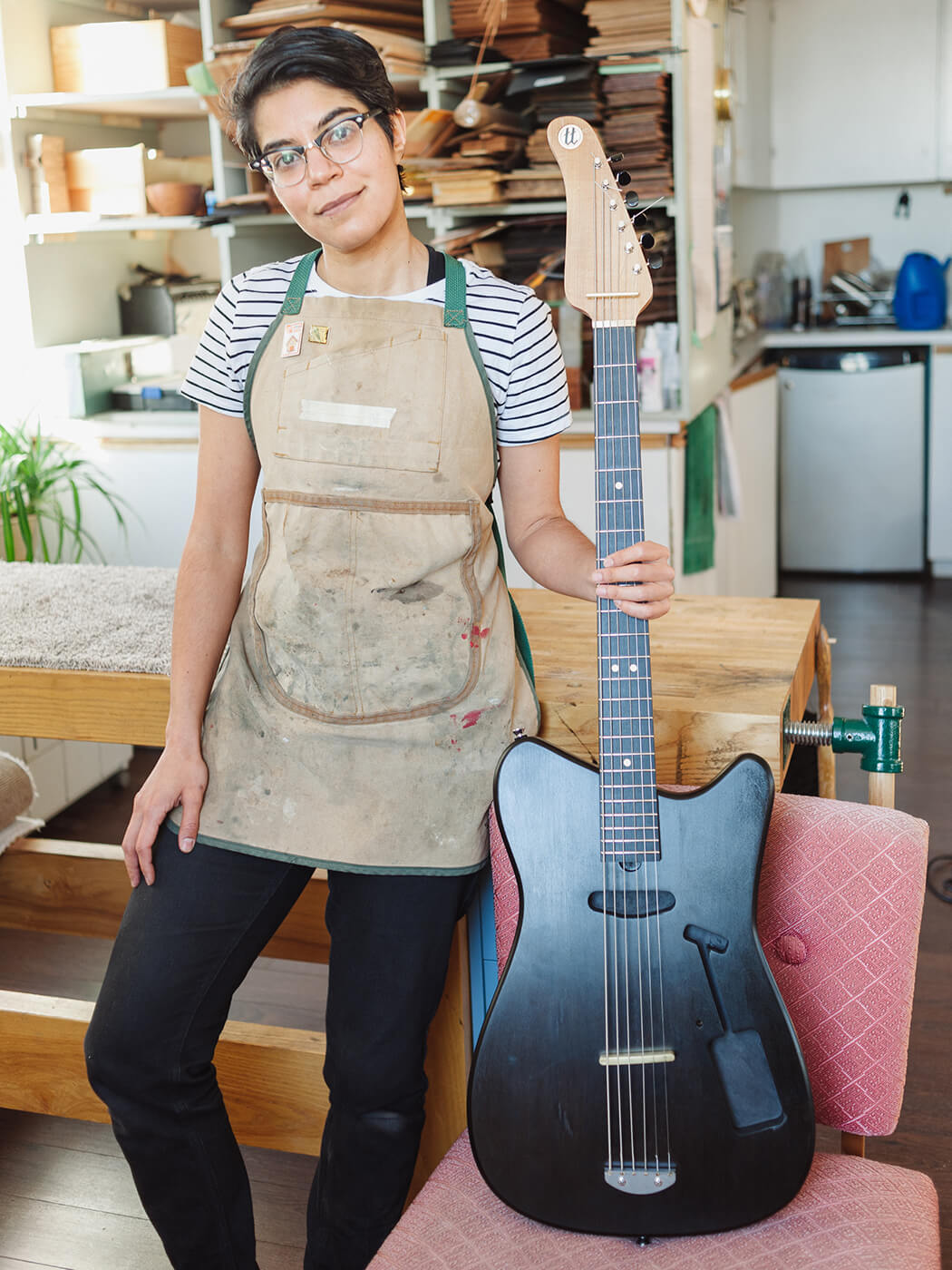 “I’m certainly not the only craftsperson who has really shied away from the idea of branding. But I’ve also had to recognise that communicating about my work via social media is a key way for it to reach people!

“Guitar building and my time in the shop is deeply personal for me, so I’ve chosen to talk about my work that way too. I love the intimacy I have with my materials and shop, and the relationships between myself and my clients, so in the way that I communicate about my work, I try not to separate the maker from the material.

“Though it felt especially vulnerable and exposing in the beginning, I’ve committed to communicating not just my process of guitar building, but the values I bring into it, the depth of what I think about and feel, the reality of my failures and successes as well as my deep appreciation for terrible jokes and general silliness.

“When it comes to translating the personal into visual branding, I’ve been very fortunate to work with two designers: Aaron Parker, who from the beginning has worked closely with me to design my logo and the aesthetics of my guitars. And Paras Memon who has been working at the visual identity of my work.” 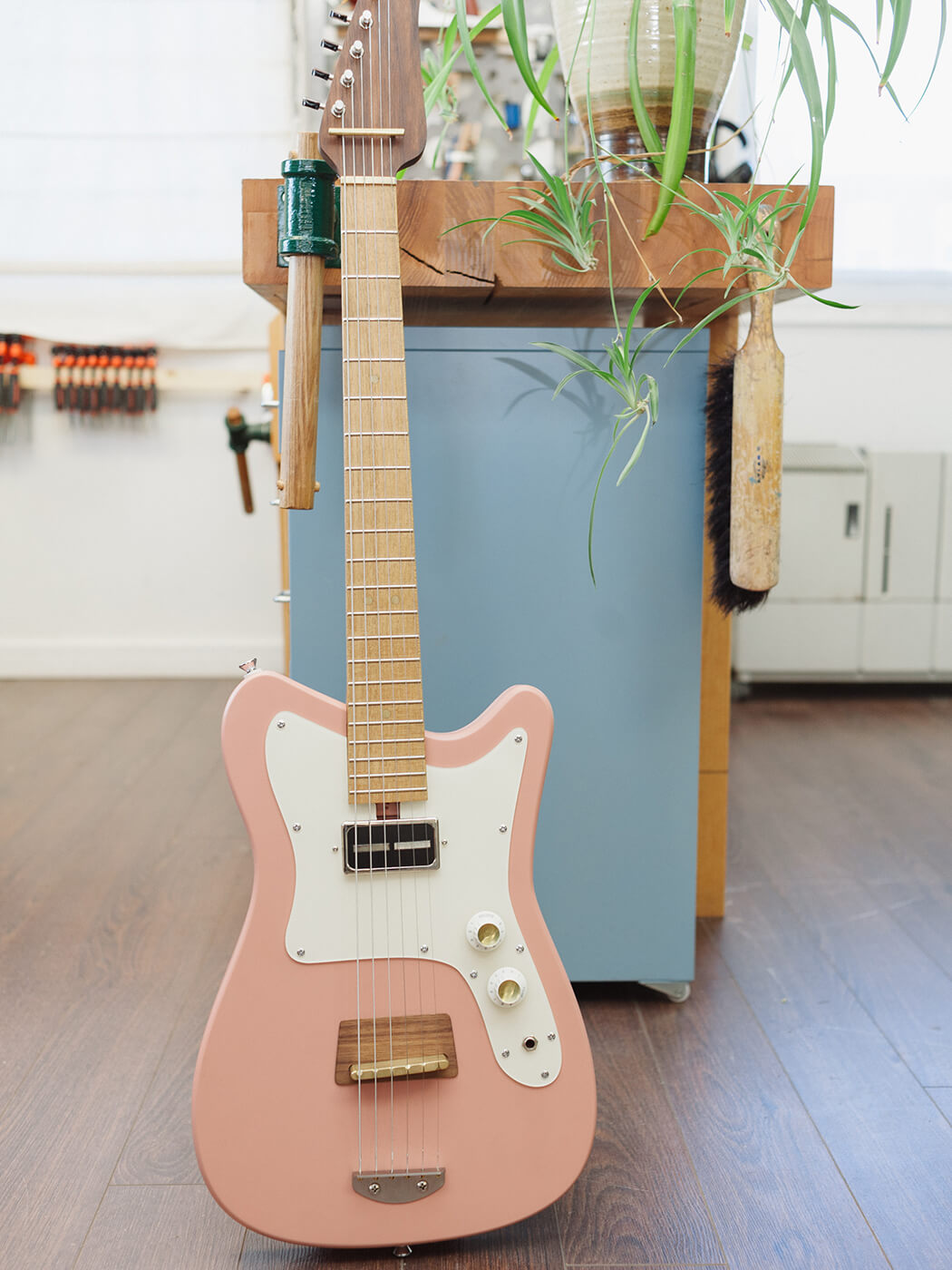 “When I was building the Musicmaster copy, I realised that short-scale instruments were generally made of a lesser quality. The underlying assumption behind this decision was that short-scale guitars were made for non-professional players, particularly kids and women.

“Once a player, assumed to be a cis-gendered man, got good enough, he would move onto a full-scale, heavy guitar that was part of the factory’s professional series. My Teeny Tuna model aims to debunk those assumptions. It is a single-pickup standard 6 string guitar, 24.75” scale length with a lively response and weighs in around 5.5lbs.”

“While I focus on building guitars that are ergonomic, until earlier this year, I hadn’t had the opportunity to see whether or not my guitars actually succeeded in that design goal. In January, I was approached by a musician named Abby in Maryland who was interested in my guitars specifically for ergonomic reasons. I decided to send my demo guitar across the continent for Abby to try in person. Receiving the testimonial, she wrote about the experience and it was probably my proudest moment as a maker.”

“I think there is a great ethical challenge the guitar making industry faces in our role and responsibilities around climate change and what it means to use natural materials in a world that is driven by the values of extractivism. While factories of all kinds are using materials to build more and more instruments that will be massively consumed, I think there is an opportunity for players and small-scale craftspeople to interrupt that process by designing, building and playing thoughtful instruments that will last lifetimes.”

What’s next for TunaTone Instruments?

“I have a number of TeenyTuna models I look forward to building in 2021, and I’m currently working with Maximillian Heidemann in Berlin on a vibrato system for my instruments. Aaron and I are also designing the visuals for a short scale bass at the moment!”