“When the beat kicks in, it’s like a punch in the face!”: Gary Holt on how Exodus rekindled their aggression on Persona Non Grata

The thrash pioneer on why he wanted Exodus’ new album to explode in your face, the trusty Yamaha that powered the record, and why he will never give up searching for the tone in his head. 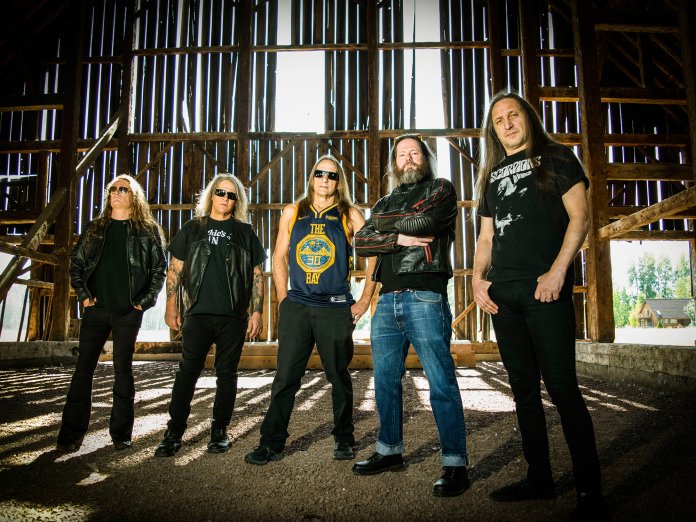 There’s an almighty bang outside the front door. Seconds later, it’s followed by a whirling hiss, then another explosion. “If you heard noises like that where I grew up, you’d be staying away from the windows,” says Exodus guitarist Gary Holt, as the cacophony relays, via Zoom, all the way from West London to his home in northern California. “It sounds like gunfire!”

The lesson here is never do an interview on Bonfire Night. This is especially true if your neighbours are partial to throwing firework-addled nighttime garden parties, as this writer’s evidently are.

Fortunately, Exodus are not only unphased by ear-splitting noise; they’ve been peddling it incessantly for half a lifetime. The sound of pyrotechnic mayhem mere metres away from your house is child’s play if you’ve jammed the thrash loyalists’ eleventh album, Persona Non Grata, the way you’re supposed to: fucking loudly. “When the beat kicks in on the album-opening track [also called Persona Non Grata], it’s like a punch in the face!” Holt devilishly laughs, still relishing Exodus’s audial violence forty years after first joining the band.

“We thought, ‘Let’s just come straight out of the gate! Let’s hope people have the stereo on too loud! They’re gonna hear silence and then boom! This explosion right in their face!’ I like it best that way.”

In metal circles, the word “Exodus” has long been synonymous with unchecked speed. Their debut album, 1985’s Bonded By Blood, remains a genre classic, its riffs ceaselessly blistering yet also quietly technical. Holt, then and now the band’s lead songwriter, darts from hefty chords to callus-disintegrating leads to the thrash mainstay of open-E-string chugging.

The subsequent R.E.M.F. sends that low open E note into overdrive, before Slipping Into Madness concludes with twin guitars so flamboyant that they’d make Iron Maiden sweat. Prescribing Horror specialises in looming arpeggios à la Slayer’s South Of Heaven, while Lunatic Liar Lord even gets a smooth bluegrass lick. So, essentially, Persona… is a tick list of metal guitar trickery, which Holt largely fulfils with a 1980 Yamaha SBG-3000. 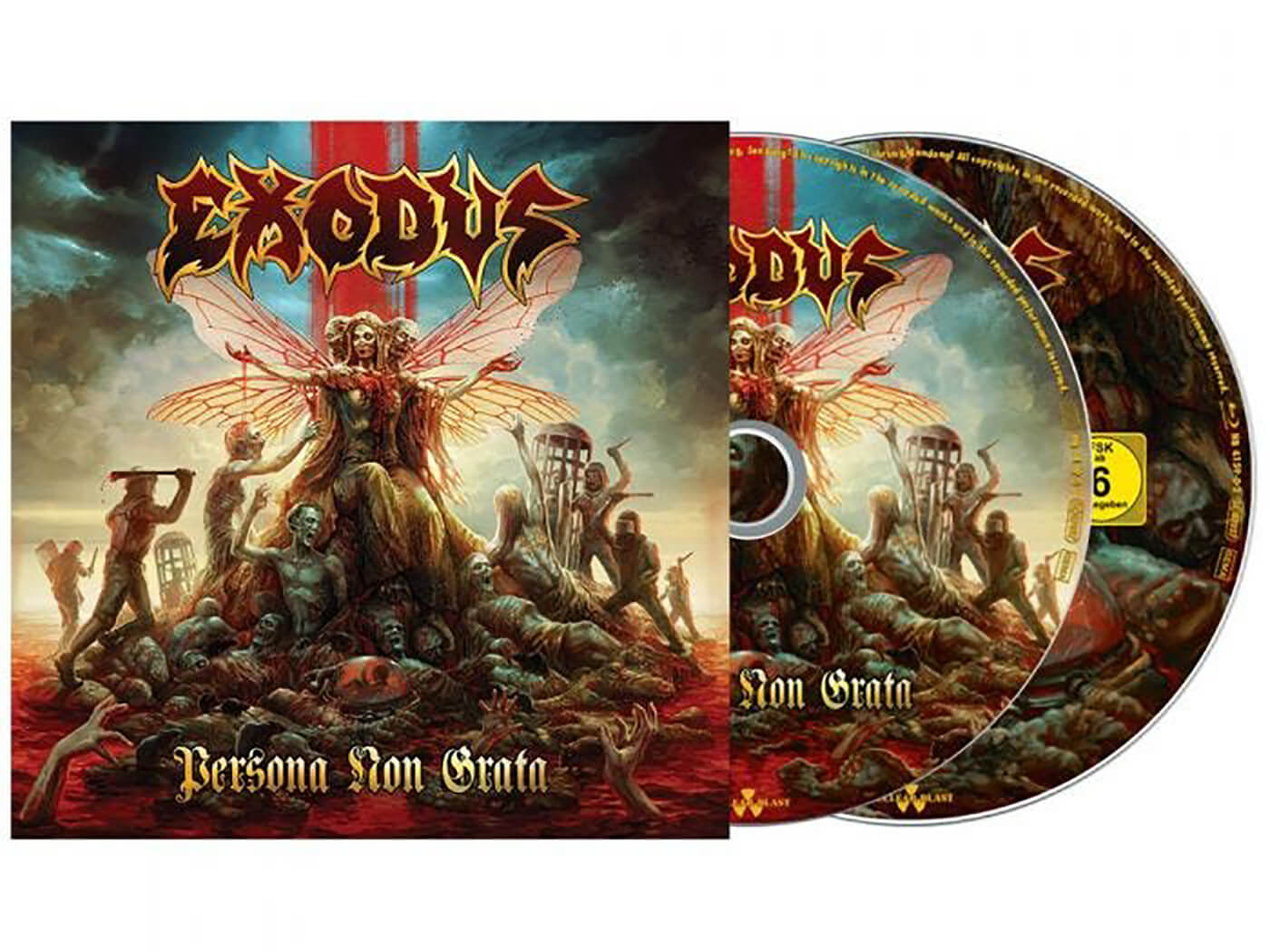 “It’s one of the greatest guitars ever made,” he says. “I usually don’t track on fixed-bridge guitars, because I’ve been playing on a Floyd for my whole life, but this guitar had the comfortable playability of a Floyd and it’s, like, a mile thick. The tone on it is insane!”

He continues: “One of my favourite things in life is the chasing of guitar tone; I’ll never stop doing it. I’ll plug anything into anything to see if it works. For this album, we went back to the old school, using Marshalls and even buying a couple of vintage BBE Sonic Maximizers. Once you get to that end result and have achieved this crushing tone, you’re super excited to record with it. That shows in your playing, because you’re really feeling it. That’s what you lose when you go in to record with, like, Axe FX. You miss that journey, that trip to chug.”

The only other guitars Holt recorded with were “a couple of my signature ESPs [the GH-600 and GH-200] and also this ESP Strat that I had scalloped from the twelfth fret down”. He intentionally packed light, as Exodus recorded at drummer Tom Hunting’s house, which is in the remote mountains of Lake Almanor, California.

“I had to ‘audition’ gear at home and take the ones I really thought I needed,” Holt explains. “It was a three-hour drive from my house; I couldn’t just go to my storage locker and start pulling out guitars to sit around and not play. I had to narrow it down in advance.” 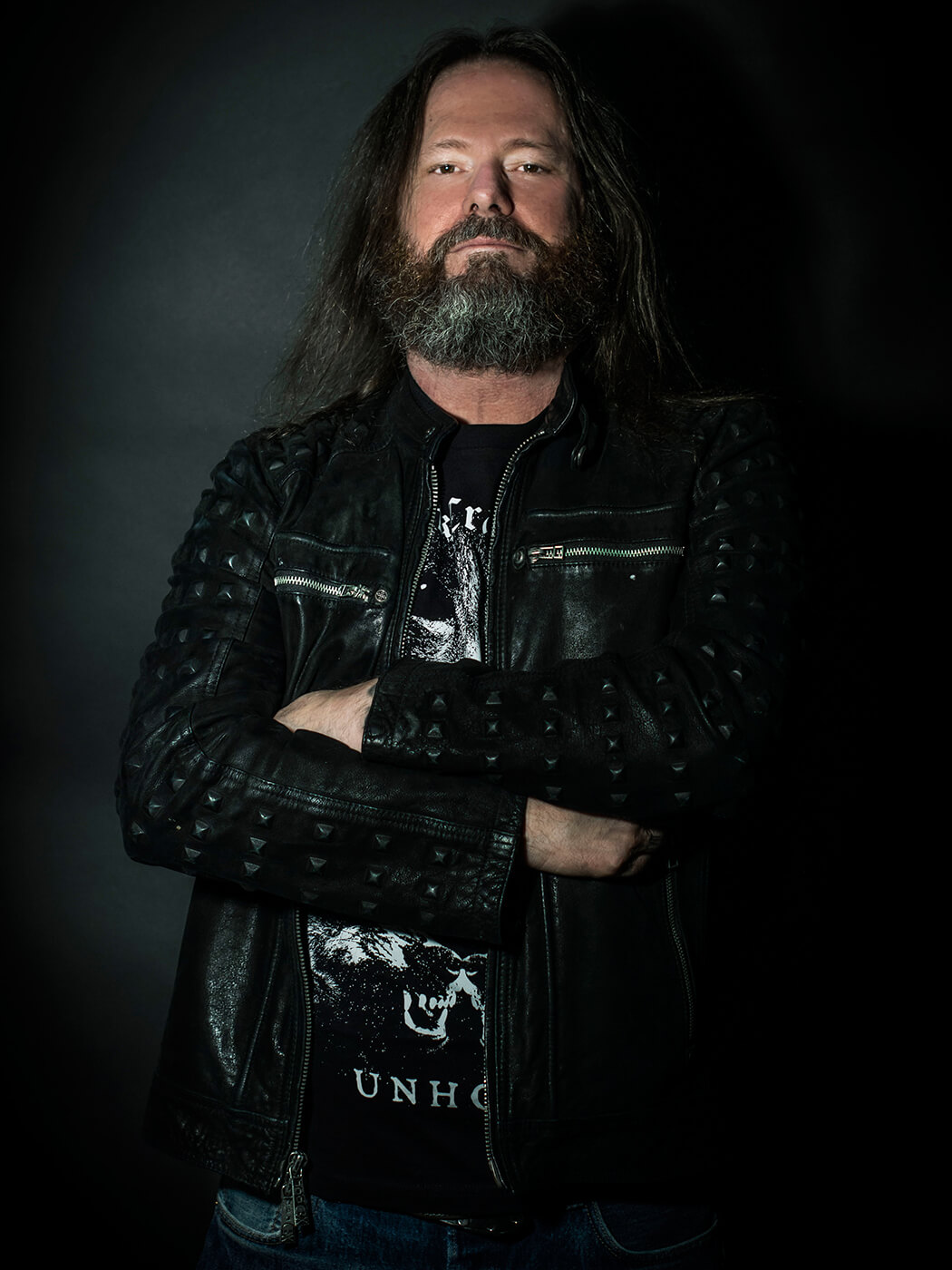 Recording Persona… was largely joyous, especially when compared with the tumultuous sessions for its predecessor, 2014’s Blood In, Blood Out. According to Holt, the band recorded that album “only a couple of months” after singer Steve “Zetro” Souza rejoined the lineup. “He was working on the songs within a week, just trying to learn the material,” says the guitarist. “He was thrown into the fire.”

Holt, meanwhile, was scarcely present. From 2011 to 2019, he moonlighted as a member of thrash metal demons Slayer, replacing guitar player Jeff Hanneman. What was initially envisioned as a short-term fill-in role became more permanent when Hanneman passed away in 2013. As a result, while newcomer Zetro tracked vocals in California, Exodus’s principal composer was touring Europe.

“I’d have preferred to have been there [in the studio],” he admits in hindsight. “It makes it very difficult to work on vocals when you’re dealing with eight-to-ten-hour time differences, and you have to get your point across in what you’re looking for over phone calls. On this one, we were able to work on it together and it was super easy.”

It wasn’t until Slayer retired two years ago that Holt fully recommitted himself to his original band. “I got a call before the start of the two-year [farewell tour], saying that they were gonna call it a day,” he remembers. “That kind of gave me a countdown to when I’d return to Exodus full-time. I was struggling with not being there, mentally. You’re out playing these great venues but you really miss your family. I was happy, when the end came, that I could go back to being in Exodus; I was on tour in two months.”

The reunited Exodus toured Europe in early 2020, as part of the Bay Strikes Back bill with fellow San Francisco thrashers Death Angel and Testament. Although Holt leaping back and forth across the stage added new fervour to their show, the live comeback proved short-lived; the trek’s European leg ended just days before the start of the Covid-19 pandemic. Testament’s Chuck Billy and Steve Di Giorgio both caught the virus while on the road, as did Death Angel drummer Will Carroll, who spent two weeks on a ventilator in intensive care as a result. Holt also stated on Instagram in March 2020 that he was “suffering from all the symptoms” of COVID. 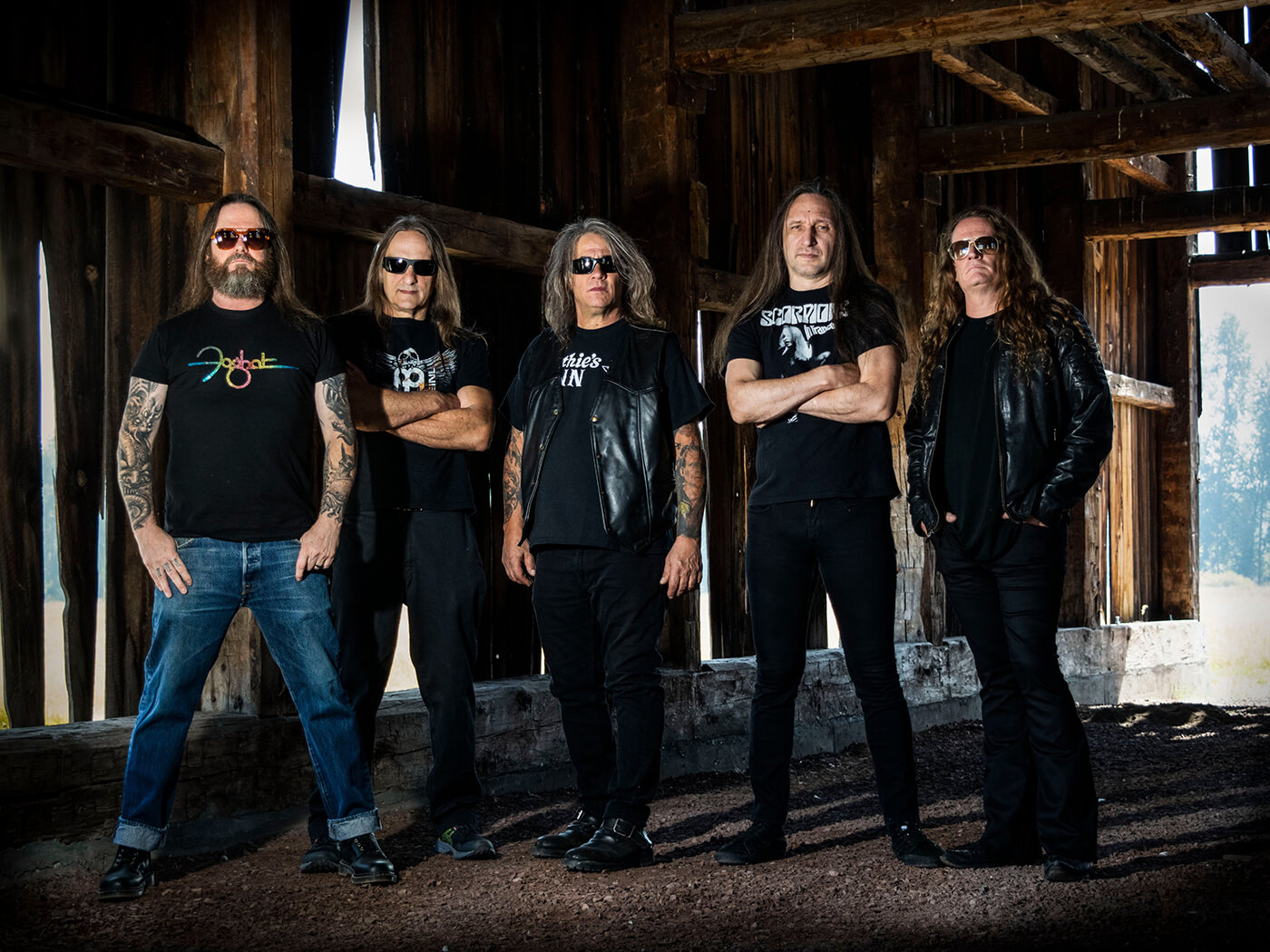 Write what you know

Writing for what would become Persona… stretched back as far as 2017, and Holt spent much of the summer of 2020 writing lyrics. However, despite the then-inescapable pandemic and his own previous illness, this is far from a Covid-obsessed album. Clickbait is a swipe at heavy metal news sites, while Prescribing Horror laments the deformities and deaths of children as a result of thalidomide. Most urgent, though, is The Beatings Will Continue (Until Morale Improves), which Holt wrote in response to police brutality during the 2020 Black Lives Matter protests.

“I looked on the TV and watched mass riots and protests, and the tear gassing and beatings of peaceful protestors, as well as those taking advantage of the situation,” he remembers. “I couldn’t help but wonder, ‘Are [the cops] hoping to improve this situation through violence?’ That never works!”

More health issues rattled the band after the album was recorded. In February 2021, Hunting called Holt and told him that he had been diagnosed with stomach cancer. “We knew, recording the album, that something was going on,” the guitarist recalls, “because he was losing weight rapidly and inexplicably.”

He continues: “He felt fine and he played out of his mind on the album. He got some higher-level testing than mountain doctor testing and then he got the diagnosis. He needed time to get better, so the [lockdowns] actually worked for us.”

Hunting underwent chemotherapy and, in July, a total gastrectomy. That same month, Holt posted on Instagram that his bandmate was cancer-free, but two days later admitted that he had “jumped the gun”. Exodus delayed the release of Persona… to let their drummer recuperate, before his eventual return to the live arena at Aftershock Festival in October. “He crushed it!” Holt beams. “It was super emotional, almost a spiritual moment, and I can’t wait to get back out there.”

After the last decade assaulted them with lineup-related uncertainty, a live-music-derailing pandemic and a tumultuous cancer battle, Persona… deserves to be the album that finally rekindles Exodus’s momentum. “I’m super excited about the album and where it’s gonna take us,” Holt concurs, audibly impatient for his band’s first fully fledged tour since the world froze almost two years ago.

“There won’t be seven years between albums again, I promise you that,” he vows, “but I want to tour this one first. Let’s hope things get back to normal and we can get back on the road!”

Exodus’s Persona Non Grata is out now through Nuclear Blast.