Jon Gomm is a true fingerstyle virtuoso. Here, he shares his advice on becoming a better acoustic player and songwriter… 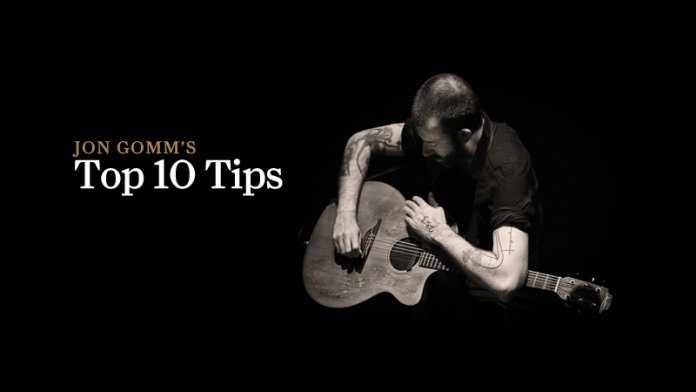 1 Don’t hit your guitar too hard

This is one of the first things I tell people when I do workshops about playing drums on acoustic guitar. You have to do it really softly and sensitively. This is for three reasons. The first is the tone – if you hit a kick drum sound on a guitar really hard and then, say, a bongo sound in a slightly different place or with a different part of your hand, if you hit them hard they’ll sound pretty much the same, because the attack is loud.

If you play them softly, suddenly the attack gets quieter, and you can hear the sustain of the tone a lot more and your kick drum will sound completely different from your bongo. If you do it hard, it sounds like somebody building a shed. The second point is, if you do it softly you get a balance between the percussion and the guitar playing. The third, and some would say most important, reason is you’re not going to break your guitar!

2 Avoid the curse of the backbeat

There’s nothing wrong with a four-to-the-floor backbeat, kick drum on beat one and three, and the snare on two and four, and you get this syndrome where guitarists will play a fingerstyle tune and then slap the strings on beats two and four and occasionally make a kick drum sound on one and three.

What they sound like is not even the worst drummer, they sound like a metronome. They could add the same colour to their music by just switching on a metronome. You need to be creative, don’t just settle for the most obvious thing that only a drummer in their first lesson would ever use. Try to create grooves that are interesting by moving the drum beats off the obvious beats. 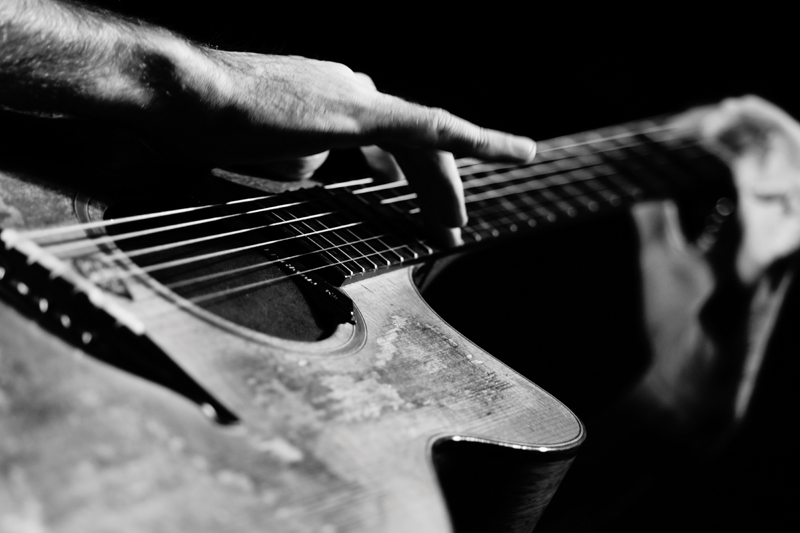 3 Learn a new scale or a new mode today

Electric guitarists are quite often OK with scales and modes. A lot of electric guitarists might know about the Lydian mode, for example, and know that it’s the one that Joe Satriani likes, or the one that Steve Vai likes, but a lot of acoustic players will be, like, ‘Lydian, I have no idea what that is!’ It’s really easy to learn a scale – just go on to the internet or open up your guitar magazine and learn the notes of the scale and then figure out how to play it on the guitar – just with one finger going up and down one string is a really good way to do it, and then put the notes together to make a chord.

Passionflower, my most famous song, is in the Lydian mode, and I deliberately did that, and that’s why it sounds interesting and different to people, because not many people write with that scale. Songwriters and composers can learn a scale and then use it immediately, that’s what I recommend.

4 Get a good pickup system

Pickups allow you to sculpt a three-dimensional sound. I’ve got a humbucker in the soundhole that has a microphone attached to it, and that comes out through a separate output. I also have a transducer stuck on the soundboard and three separate outputs from the guitar, EQ’d separately, and they all do different jobs. 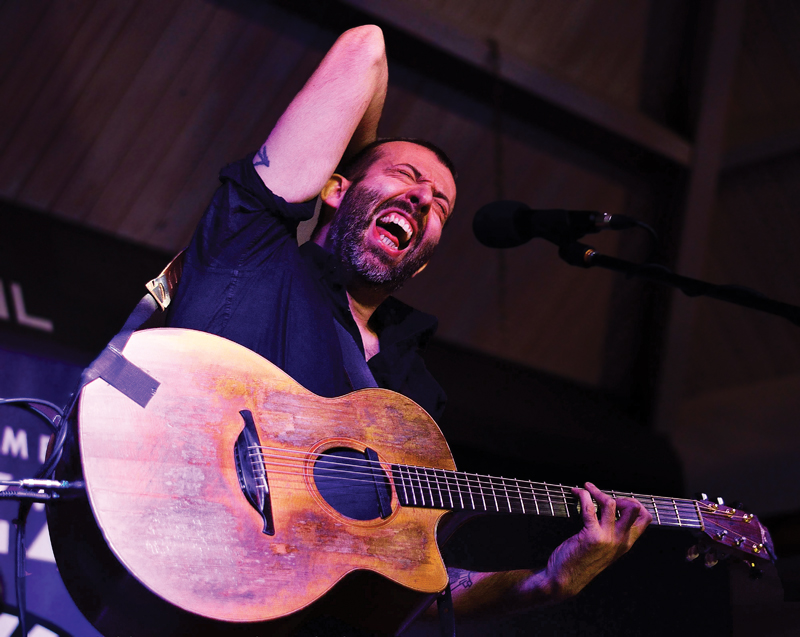 5 Use open tuning as a root to creativity

Some people will tune their guitar to DADGAD and then once they’re there try to learn a load of chords, maybe some scales and songs in that tuning, but what I’d recommend is go into a new tuning you’ve never used before and try to write something immediately.

Explore it a bit, but try to see what is possible just by moving your fingers around. It sounds like a bit of a `caveman’ way of writing music, but it’s very liberating and it’s what a lot of the great songwriters from the past have done. If you imagine Kurt Cobain writing the riff from Smells Like Teen Spirit, he’s clearly taken that powerchord and moved it round to places where it will sound good.

That’s such a great way to write. Almost everything that’s possible in standard tuning has maybe been done, and as soon as you tune into a different tuning you can take that `writing with your fingers’ approach and find things nobody’s ever done before.

6 Build your songs around extended techniques

If people are interested in new techniques on acoustic guitar, of which there are now many, use them to compose and make them part of a tune. Another curse of modern fingerstyle guitar is people will write a fingerstyle piece, it sounds kind of like a regular tune and suddenly there’s this slapped harmonic, a violent, high-pitched loud sound that just kind of appears. That’s not necessarily the end of the world, it can sound good, but what you’ll find with guys such as myself and my good friend Andy McKee is when there’s a slapped harmonic in the tune, it’ll be holding a melody note, it’ll be a crucial part of the tune, rather than a weird overdub that’s just been dropped on top. Include those techniques from the start, don’t add them in later because it won’t work and they won’t fit. 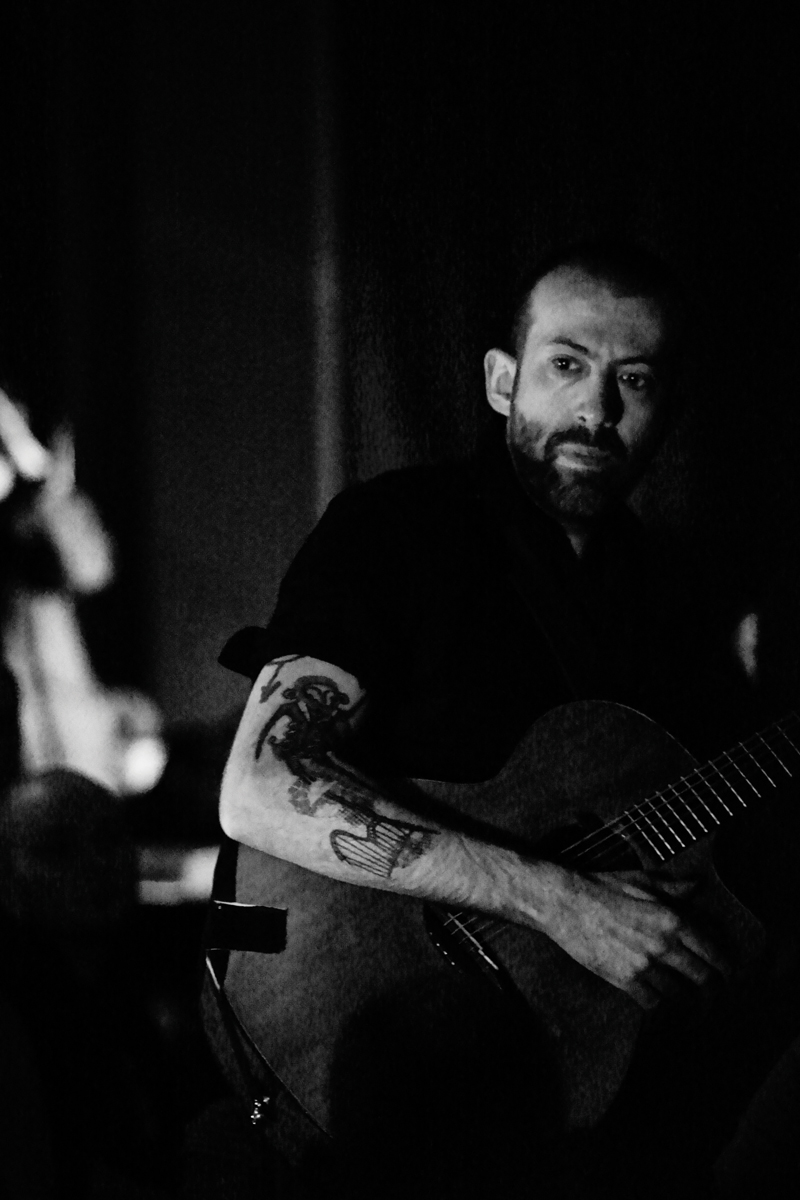 7 Compose away from your guitar

This really frightens guitarists, for the same reason that reading music frightens guitarists. They think that if they don’t have a guitar in their hands that they can make sound with they can’t express themselves musically. People always joke ‘what’s the best way to shut up a guitarist? To put sheet music in front of them’. Even better for me is to say, ‘What’s a good way of stopping a guitarist from being a musician? Take away their guitar’.

One thing I do a lot as a luddite guitarist who’s terrible at reading music, is write in my head. You’ll often find me hiding away in a hotel room or in the bathroom at home, singing a bassline into my phone, or a melody. Quite often, if I’m listening to the radio I’ll hear a little something in a melody that I like and want to use, and I’ll sing those notes and somewhere later they’ll get incorporated into a song.

I’ve just written a song, and the melody of the chorus is based around a Jeff Buckley live CD, where he improvises a little pentatonic fill with his vocal. I loved it so much that I expanded it into an entire chorus for this song.

There are two elements to this: one is your hands and wrists, the other is posture. Every time I play guitar or do a gig, afterwards I stretch. I have five or six stretches on each hand, my fingers, palms and tendons from my forearms through to my fingers. That’s how you avoid getting injured. It is an unnatural activity and not very good for you. Nearly 15 years ago, I had tendonitis in my shoulder and had to have surgery. Since then, as you might expect, I’ve been very careful about stretching and posture. It’s difficult to put it across in text, but if you’re worried about your posture or get any kind of pain, discomfort or numbness you need to find out what’s wrong with your posture, the sooner the better. Don’t take it lightly, I’ve been there and it’s not great.

9 Try to recreate non-guitar music on the guitar

A lot of young acoustic guitarists now sound as if they’re influenced by Andy Mckee, Antoine Dufour, Don Ross, Michael Hedges or me. You can hear that, but you can’t hear anything else, it’s just guitaristic input. I always suggest that acoustic guitarists try to recreate the sound of other instruments.

I do it all the time in my composition. I try to make my guitar sound like I’m an 80s synth-pop band, or a dub reggae band or a jazz trio. I’m thinking both in terms of the genre that I’m playing and the sounds I hear in that music. I’m always gunning for both things at the same time. It’s an approach that tends to get people out of compositional ruts. 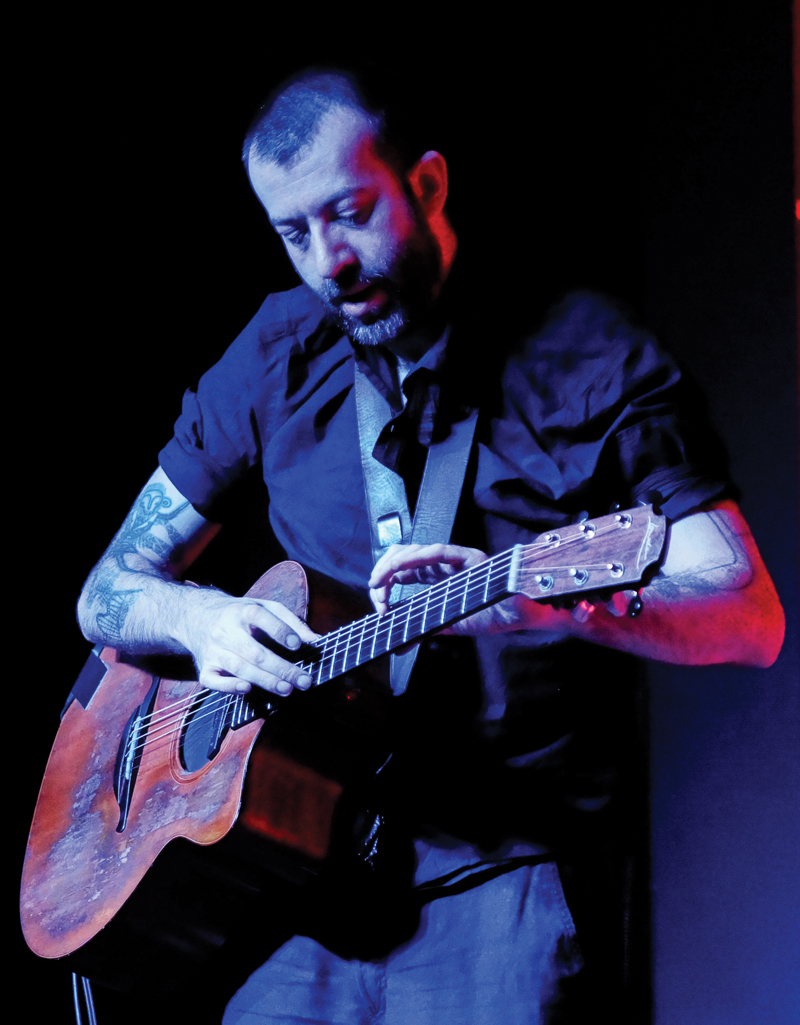 10 Be yourself as a musician

It’s quite to hard to do, or to figure out what this means, but the more of yourself you put into your music the more likely it is to be unique and interesting. There are questions you can ask yourself before you start writing your next song. Why are you going to write this music? What’s the purpose of it? Some people just want to make a pretty sound or make music that people can dance to, and they’re totally valid things. But for me, the way you can really invest yourself into the music is by thinking, `What’s the motivation? Why should this music exist? What will it bring to the world that’s different or valid?’

There’s a lot of music in history that’s protest music, and that barely exists now. I’m the only person I’m aware of among my peer group in fingerstyle that writes songs about protesting against the actions of my own government, for example. There’s no reason why fingerstlye guitar, or pop music, should be reduced to just being a nice noise that people put in their ears, when over the decades of pop it’s fulfilled such vital functions in society.

I met Nile Rodgers last year; he was showing me the chord changes in Good Times. The chords are really weird, and I thought that it must be a jazz thing, but actually it’s not. He’s classically trained and loads of the chords he uses are thought about in this method of voice leading that’s taken purely from classical training. All he wants to do as a musician is make people feel good, but he’s also got things he wants to do musically and intellectually that are really exciting and innovative, and that’s a reason for that music to exist beyond just being disco.