It’s important for the right hand to establish speed, but you can’t establish speed if you start by trying to be a 220bpm player when you’re a 150bpm kind of player – you’ve got to work up to it. My suggestion for that is to use your phone. There are so many things that you can do with your phone now, like getting a metronome app.

So for working up speed, you can start at 150bpm and play your riff at that speed, and if 220bpm or some ridiculous number is what you’re looking for, work your way up to that. That’s the most structured way to build up your speed.

I’m mid-tour now, so I don’t really think about anything like that, but at the beginning of a tour I’ll run through some Slayer riffs. I’ll also play Propaganda by Sepultura because that’s a good pedalling song but it’s not fast, and then I’ll graduate to Hostile by Pantera because that’s a bit faster and then, when I’m oiled and ready to play, I’ll start playing Reborn or Jihad; Slayer stuff that has what I call broken rhythms. It gives your hand different ways in which to warm up. It’s about getting prepared.

I find myself warming up for longer because I want to be good. We also open up with Repentless, which isn’t the easiest song in the set to play. Another thing I do to warm up for a show is to play whatever leads I have in the first five or six songs. I play those two or three times each. I know what they sound like if I’m playing them correctly, so I don’t even plug in – I won’t bother anyone else with my repetition.

Sometimes, I neglect that and I hear it back a few days later and realise I didn’t play it that good, so I’ve been concentrating on that. We have a very physical show, so I stretch my neck and my back every night. My hands get a stretch when they’re doing their thing anyway. 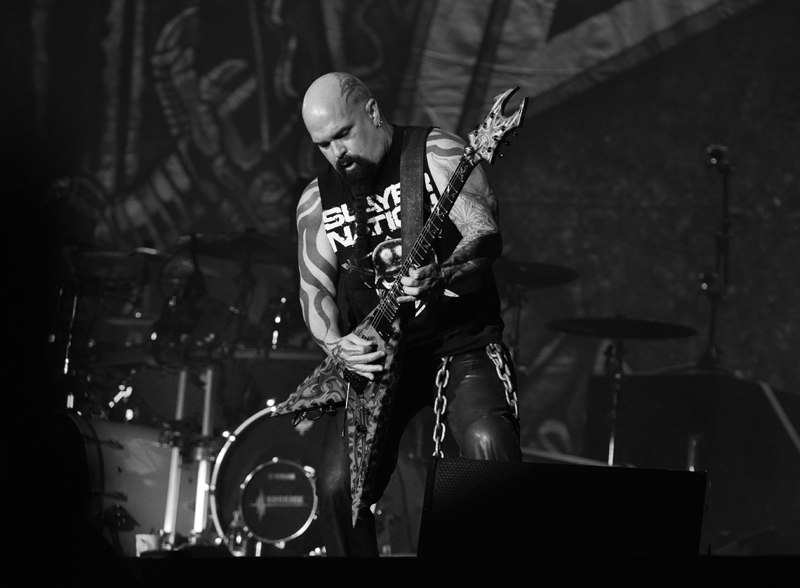 3. Work on your vibrato

I don’t even think about it. I just do it. I think Gary [Holt – Slayer’s other guitarist] has a harder vibrato than I do. It’s your own personal style, and how it evolves depends on how much you want to make it sing on its own. It has a lot to do with muscle development and getting calluses at the end of your fingers.

When we are rehearsing for tours, we go from working on new material with no leads at all to live show stuff that has lots of leads. Sometimes I have to call time on practice because my fingers are dust; I have to just go home. You’ve got to build up the stamina.

Slayer is more than a show. We interact with the fans and they interact with us with their mosh pit. It’s an event. If I wanted it to be a perfect musical event, I wouldn’t be up there headbanging wearing 15lb chains hanging around my knees.

If I stood still, I would play everything note for note, but when you put on a show, I think note for note gets a little lost. If you’re playing great songs and the performance is awesome but it’s not like watching a symphony, that’s OK. It’s a personal choice. You’ve got to figure out what you want to do and you’ve got to be OK with that decision. Do I wish I hit every note? Yeh that would be nice, but the show wouldn’t be as intense.

I would revert back to the metronome. If you want to get faster at something, master it and then bump it by 5bpm. That’s kind of remedial, but guitar is remedial – you don’t have to think outside of the box. It’s cool to think outside the box when you’re trying to be cool and different, but as far as getting better and faster, it shouldn’t be that tricky, but it is a lot of work.

I’ve used the term archaic to describe my solos, but demented also works. And it’s even more applicable to playing rhythms. If it’s not in key, it doesn’t matter as long as it sounds cool. At the end of the day, if you like the way it sounds, it doesn’t matter what key it’s in. Slayer’s bent that rule since day one.

My lead playing evolved from that style of writing. So if we were playing a rhythm that was all in a major scale, I’m sure we would do leads in a minor, even though playing a major would make the most sense musically. You just branch out to see how you can bend the musical rules. That’s the most fun thing we do. Some people don’t like our lead style – it’s unique and it sounds like Slayer. It’s like Tom’s voice. When you hear Tom’s voice, you know it’s Slayer. When you hear us playing lead, you know it’s Slayer. There’s something to be said for that. 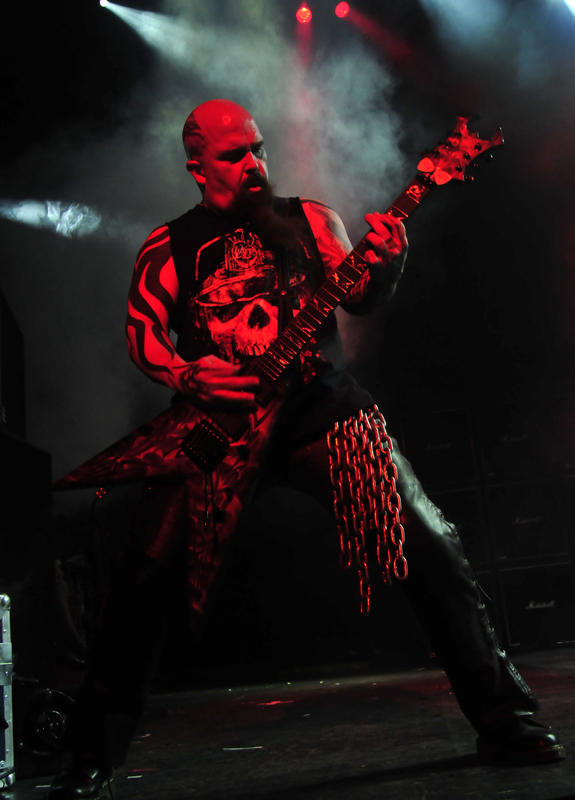 6. Write riffs with a metronome

I’ve got a metronome app on my phone because I often have riffs in my head that I think will go together but when I play them to a beat, one will work and the other will be a different tempo. I use the metronome so I know before I show Paul [Bostaph – Slayer’s drummer] the riffs work together.

Stay away from the whammy until you’re out of ideas, because it is way too easy to rely on it. Of course, there’s a skill to it. When you’re playing something, it’s so easy to go to the bar and hit it and it sounds great. That’s why I try to stay away from it – you can get tunnel vision and get married to your bar.

More than I am. And that’s not what people want. You want to use the whammy bar as an accent, not something you rely on. Sometimes, yeah, you need a big divebomb and you want to hit a harmonic and bend the fuck out of it, and I’ve done that too many times in my career. But I like it; it’s Slayer, it sounds good.

In Cast The First Stone, Gary starts out with a guitar harmony on his own and then just rips through the whole thing on top of a slow rhythm. I recorded my solo after his and I wasn’t going to go head to head with Gary Holt, so I left it really open. It’s got a lot of air in it, so it accents what he plays perfectly, I think.

That’s one way of playing it, but it can be all over the map. In You Against You, it sounds like a guitar duel. 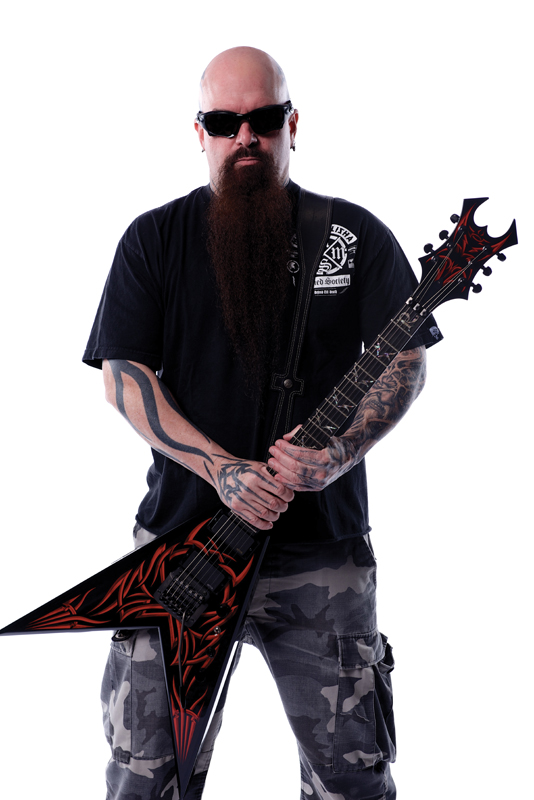 9. Get your tone right

When I used to use an EQ, everyone would look at it and it would be the exact opposite of what people thought it would be. If you were to look at my EQ, it would look like a frown rather than a smile. I liked the mids because everything else I could get from my head. I used to play a show with a Marshall JCM800 and a Boss 10-band EQ, and I would have my sound. That, to everyone’s surprise, including Marshall, was that frown.

The EQ would start at zero and go all the way up for the mids and then back down to zero for the treble. It wasn’t for leads, it was for rhythm. It made them full and chunky [Marshall released a signature Kerry King JCM800 2203KK amp – a single-channel, all-valve 100-watt monster with no reverb or effects. It featured a switchable signature sound section that included two adjustable controls: assault and gate.

Assault controlled the extent of King’s signature EQ boost, while gate was an adjustable, studio-quality, ultra-fast noise reduction unit]. My sound is based on a rhythm sound, but for lead, that’s not so good. So for lead I have an overdrive on a little bit, and generally I’m on a wah just to get a little more high end out of it. If I dialled in a lead sound, I wouldn’t like it for my rhythm sound. And since my rhythm is the majority of the set, that’s what I base it on. 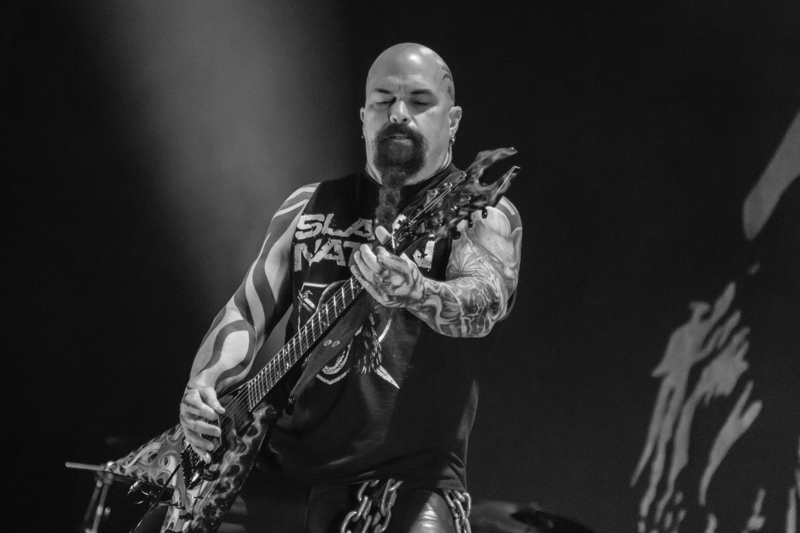 It’s way cooler than mirroring. It’s not like you’ve just plugged in a harmoniser. The solos actually interact with each other. It’s an interesting thing that I like to incorporate into our solos.

11. Learn to work with other guitarists

Gary Holt is a phenomenal player. I’ve been here forever, so I couldn’t let the new guy show me up the whole time. I’ve paid attention to what I’ve been playing, especially on this recording [Slayer’s 2015 album Repentless]. I am trying to be a cleaner player with innovative ideas that will bounce well off the innovative ideas he’s got.

We’ve just played how we’ve played forever and then, when I realised Gary was going to be playing leads on the record I knew I had to step it up because Gary was going to come in here and kick the doors down. I just wanted to pay more attention to my leads in that respect.

I still have my archaic, demented leads, but in instances where I’m playing right behind or right in front of something Gary’s doing and he’s ripping through it, I want to be more musical.

Slayer will be back in the UK to headline Bloodstock Festival (www.bloodstock.uk.com) in August 2016