For a quarter of a century, Mark Baier has been chasing the dream of recapturing that elusive sound of the classic Fender amps of the 50s – and his Victoria amplifiers are proof he succeeded. Dave Hunter meets a man with a remarkable passion for vintage fidelity… 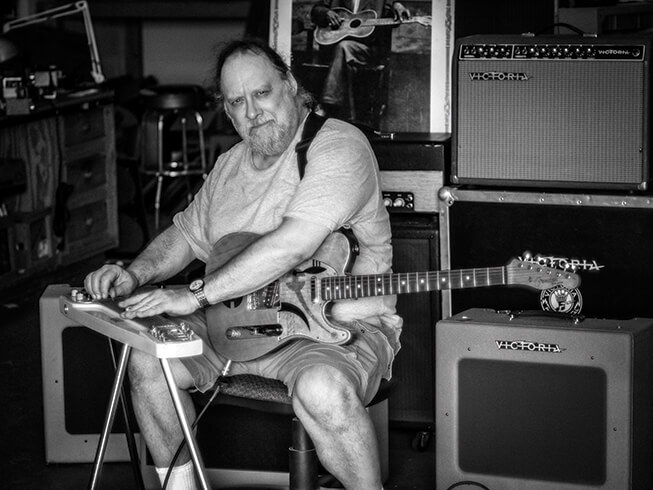 The boutique amp boom was fuelled by the desires of guitarists who couldn’t find what they were looking to play — whether in satisfactory renditions of vintage amps or modified modern designs – and decided to get their hands dirty and build the things themselves. Such was the birth of Victoria Amplifier Company. Working as a stockbroker by day and playing blues around Chicago’s ever-fertile music scene by night, founder Mark Baier had discovered the magic of Fender’s tweed amps of the 50s, but sought the same tone in a more reliable and more affordable modern reissue… only to discover they just didn’t build ’em like they used to.

“I had bought a reissue Fender Bassman and I’d had a real one,” Baier tells us. “I bought the new one thinking it would be new and great, but I was disappointed and realised that part of the mojo was the way they were built.” It seems there was nothing for it, then, but to build the things himself, and to adhere as closely as possible to the components and construction techniques used by Leo and co back in the day. Thus began a quest that soon resulted in some of the best-respected reproduction tweed amps ever made, followed by several more original designs that have ably shown off Baier’s more creative side.

With all of the suppliers and online resources available today, the would-be valve-amp maker can easily fill out a parts list without even having to rise from his or her desk. Back when Baier started Victoria, however, the effort was far more challenging.

“Everything’s quite a bit more accessible if you’re a young lad looking to build your first tube amp,” he says. “When I did that back in the late 80s you really had to search to find the transformers, to find the schematics, the parts. Many of the parts I had to make myself. Now you pick up a Mojotone catalogue and you can build your own amp.”

One insanely fortuitous discovery amid Baier’s quest for accurate components came from his search for period-correct transformers. Speaking with another parts supplier one day and venting his frustrated efforts at locating accurate transformers, Baier was told, “Oh, I know a guy who used to work at [original Fender transformer maker] Triad. He’s retired now. Why don’t you give him a call?”

Baier takes up the story: “He gave me the number, and it turned out I was calling this old guy in Arizona who’d initially made the transformers for Fender. I told him I’d called Fender trying to acquire the original specs, and they had no idea what I was talking about. I’d called Schumaker and what was left of the Triad company, and nobody knew what I was talking about. I was relating all this, and the old guy, whose name was Tom, said, ‘Well, the reason that none of those people have any of those specs is that when I retired I cleaned out my desk and took them with me.’ He had all the original old winding data that was initialled by Leo Fender and dated ‘1958’. And he gave me every one of them, and I was able to take these engineers’ specs to my transformer manufacturer here in Chicago and say, ‘Build these transformers just like this!’ And they said ‘no problem!’” 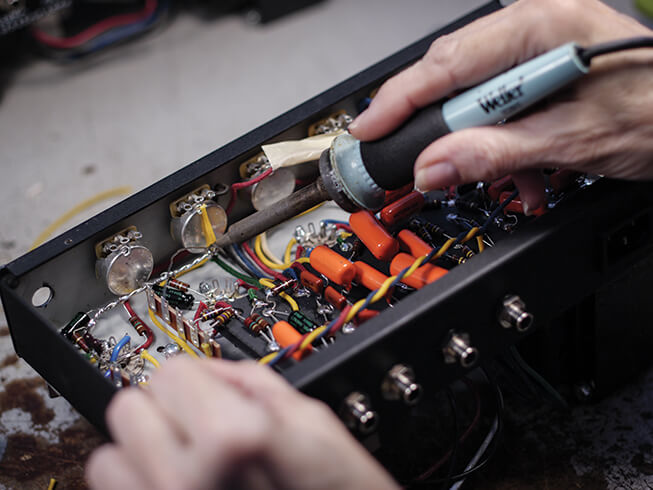 In addition to the access to parts and information, Baier has seen a lot of other changes in the high-end amp market since he founded Victoria nearly 25 years ago in 1994. There’s a lot more competition in the market now, certainly, but one of the major obstacles involves the effort to promote and publicise his products. “I am a 20th Century person at the end of the day,” Baier adds, “and I love magazines, I read magazines, and I like the ads in magazines. I can’t stand the ads on the internet. They drive me crazy.

“When I first started, my first substantial sales numbers were the result of a product review I got in a blues magazine called Blues Review Quarterly. One of the writers was Bob Margolin, who had played with Muddy Waters, whom I’d had an opportunity to meet. So I called the magazine and they gave me Bob’s number, and I talked to Bob. I sent him an amplifier, and Bob gave the amplifier a five-star review – it was a tweed Super, the first amp I made – and as a result of that little article in a quarterly blues magazine I must have sold 40 amps. Holy cow! And that’s when I realised, ‘Maybe I’ve got something!’”

It’s easy to forget today — when you can’t swing a Tele without hitting a good tweed-inspired clone or some homage to those timeless 50s Fender designs — that just a little more than two decades ago, your only real option if you were hell bent of acquiring that sound was to track down an expensive original, and hope it didn’t fall apart on tour. In the intervening 25 years, Victoria’s vintage-reproduction amps have become the go-to for countless working professionals seeking an easy and reliable means of fulfilling their need for tweed.

Among the several facets of the ‘tweed mystique’, Baier cites the simplicity and elegance of the circuits, with few extraneous components to get in the way of the tone; the resonance of the solid pine cabinets and their thin ‘floating’ plywood baffles; the liveliness – to the point of microphony – of the circuit boards themselves and the components mounted on them; and the fortunate confluence of so many well-made parts that simply came together to sound good.

One component that’s often overlooked, however, is the stuff that strings it all together. “The hook-up wire!” Baier declares. “That solid, 22-gauge copper wire. I think it’s got a real character of its own. It’s a solid conductor, so you’ve got this extremely subtle kind of top-end. The top-end is recessed, but it’s not that it’s muted or muffled or anything, it’s just one of those things that you hear in an amp, and I can almost tell when it’s got stranded wire in it [rather than solid], and that’s most amps.”

Alongside the wire itself, though, is the way in which Fender used it, and Baier and co have been strict about following the template laid out in Fullerton more than 60 years ago.
“The way you dress the wire in the chassis, that’s one thing that I’m very meticulous about personally,” Baier relates. “And JoAnne [Klein] and Maureen [Baier] who build the chassis are very meticulous about how they route that wire along the chassis and to what extent it creates a subtle capacitive effect. That’s on purpose.” 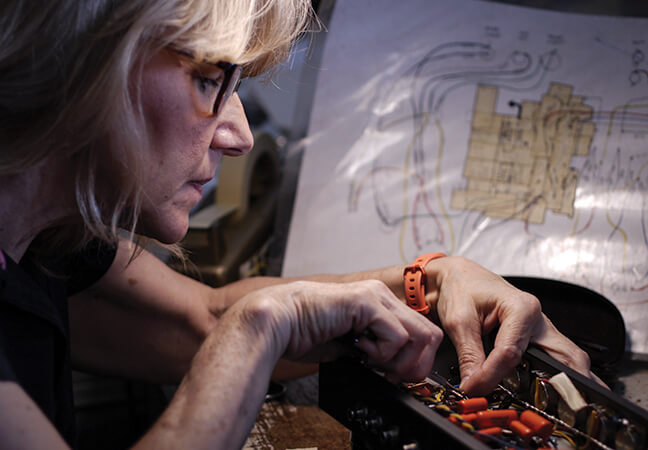 Having long established Victoria as a leader in tweed repros, Baier has also created some more original designs – albeit amps that are often inspired by vintage circuits and build techniques. His aforementioned Silversonic packs the legendary tweed Bassman circuit into a 1×12 combo generating 20 watts from a pair of 6V6s, with reverb and early-60s-era harmonic tremolo squeezed in for good measure, while the Sovereign applies nifty design twists to a more Marshall-inspired 50-watt template with EL34 output valves.

Of all the newer efforts, though, one of the faves is a re-think of the smallest of the collectible tweeds. The Tweedy Verb is a tweed Champ circuit adapted to a 1×12 combo with reverb and the ability to both swap in larger output valves for more power and to scale the rectifier tube upward for more punch and solidity.

“Chicago Music Exchange did a Champ shoot-out with Jeff Tweedy from Wilco, with Jeff’s original Champs and one of mine. They told me, ‘Mark, yours was just the best! Tweedy couldn’t believe how much better the Victoria sounded!’” And the key to the tonal splendour of Baier’s Champ (dubbed the 518 in Victoria speak)? “This is one of those dirty little secrets, but my Champ amp is my only reproduction amp that is not 100 per cent honest to the original, in that we use a much larger output transformer, and we beef up the rating on the cathode resistor to the power tube. The output transformer’s the size of a tweed Super output transformer, but it’s a single-ended transformer, it’s a big piece of iron. The output transformer on the originals is the size of a peanut.” All of that translates into the Vicky Verb, along with the great-sounding buffered effects loop of the Sovereign head and – voila! – the result is an amp that has quickly won a lot of favour among studio and small-club players. “Put in a 6L6 and a GZ34 rectifier and you can easily take it to the next blues jam,” Baier declares.

So what’s next? Amid the shifting sands of the boutique market, Baier has identified the need for a versatile sub-20-watt amp head at a good price, and has just the thing bubbling on the back burner at the time of writing.

“It’s going to be a dual-EL84 or 6V6 head with a stepped attenuator,” he reveals. “I’ve been messing around with attenuator circuits and I think I’ve found one that really works well – it’s not that expensive and it’s really groovy. It will have the effects loop from the Sovereign, and it should all fit into that compact chassis from the original Hammond reverb amps – at a price of $1,000 to $1,300.” Bring it on!
For more visit www.victoriaamp.com