With a powerful voice and distinctive electric guitar style, the Vigier-toting UK songwriter has conquered YouTube, played Nashville’s famous Bluebird Cafe, and played with a host of big-name acts along the way. Now, as she embarks on her first headline UK tour, she tells us about the secrets behind her unconventional success… 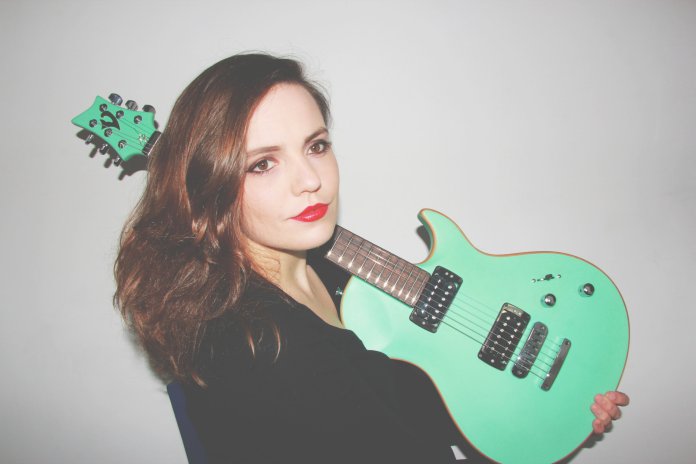 As with so many guitarists, it all started with a Squier for Mary Spender, but not in the way you’d think…

“After seeing some boys at school with their Squiers, I found my great grandmother’s Spanish guitar that was gathering dust,” she recalls. “I started teaching myself on that, while it took me year to save up for my first electric – a Yamaha Pacifica 112 and a Laney practice amp, which I still have today! I was quite lucky and my parents had good taste. So I grew up on Joni Mitchell, Tracy Chapman, Dire Straits and the Rolling Stones. I was also studying classical music – violin, viola and piano – but I never had lessons on guitar.”

It’s a very solid foundation, but over the years she’s built on this to develop a style that blends her sultry vocals with an unusual percussive fingerpicked electric technique blurring the boundaries of pop, blues and soul. “My style has changed a lot,” she affirms. “I’ve drifted through a few different genres, as well as my voice maturing quite a lot, too. I started playing in heavy rock bands as a teenager, then even dabbled in electronic music, but have settled on writing my own material in quite a bluesy style.

“To make a living in music, you have to find your niche and then work very hard on carving it out. I’ve worked as a freelance musician for quite a few years playing cover gigs and weddings around Bristol and the South West, but started focusing on my own material and making videos this time last year. My career has changed somewhat!”

The fruition of this process can be seen in her recent material, including latest single, Opposite, which showcases her crystal clean fingerpicked electric guitar in full flight. It’s an unusual vibe for an electric artist, but something that grew out of the realities of the road.
“Although I started on electric, I switched when I was 19, as it was easier to travel with just an electro-acoustic,” Mary explains. “I went back to electric in 2015, but kept on finger picking… so yes, it’s also why I play with 0.011-0.049 gauge strings!”

YouTube is one of the most powerful tools that young musicians to get their music out there, but Mary took a different approach to the website, which has proved hugely successful, and also enabled her to indulge her guitar and gear obsessions along the way with her ‘Tuesday Talks’ series, which blends practical advice about gear, songwriting and technique with interviews with guitarists, online guitar personalities and gear makers.
“I’ve had my YouTube account since 2006 and started with just music videos I had made with my friends,” she recalls. “It took me a really long time to find something I could do consistently, but I knew I enjoyed film making and I also watched [mega-popular YouTube star] Casey Neistat’s daily vlog, and thought it would be interesting to do something music-related.

“I started ‘Tuesday Talks’ in September of 2016 and it’s just grown since then. I still perform original music on the channel and vlog my trips, but I also get to interview successful guitarists, including Devin Townsend, KT Tunstall, Kaki King and most recently James Valentine from Maroon 5. I enjoy the variety. I love documenting the whole process of what it takes to be a musician in the 21st century, but really love interviewing guitarists and hearing about their journey.”

If her path to success has been unconventional, Spender’s guitar choices are equally outside of the norm…

“I’ve never gone for what other guitarists would expect,” she affirms. “For a short time I did own an arctic white Mexican Strat, it’s almost a rite of passage for any guitarist. But I now understand why I don’t like certain guitars and for me it’s pretty simple; the neck has to be really slim, with a low action and I prefer a shorter scale lengths, too. I don’t use a plectrum either, so huge Gibson acoustics just wouldn’t work for me.”

What does work for Mary, however, are the unconventional charms of a pair of Vigier electrics – a GV Rock and an Excalibur – that she ended up with thanks to a series of unlikely bits of serendipity.

“Well, weirdly, Ben Whatsley, who sold me my first guitar, ended up becoming Vigier’s UK manager,” she recalls. “We stayed in touch, and he even used to play bass for me. I was then introduced to the whole team at his wedding and I just thought they were a lovely bunch of people. They kindly gave me a pass to NAMM in 2015 and the rest is history. I’ve since been to the factory in France and Patrice and Lina have just been very accommodating.”

It was at that NAMM show that she found and fell in love with her main squeeze, a GV Rock in Revolution Green. “I knew that it was unique and an extremely versatile instrument, not just meant for heavy music,” she adds. “I now have quite an eclectic range of gear for a bluesy guitarist.”

This includes her Excalibur Indus, which has been tricked out with a A Little Thunder pickup – something that really helps her out when she’s gigging without a full band.
“It’s a really fun bit of kit, especially for a solo guitarist, as it drops the lowest two or three strings an octave (or two) below,” Mary explains. “It has a special jack input, too, so you need a stereo XY cable for it to work. You then plug one lead into a guitar amp and the other into a bass.” 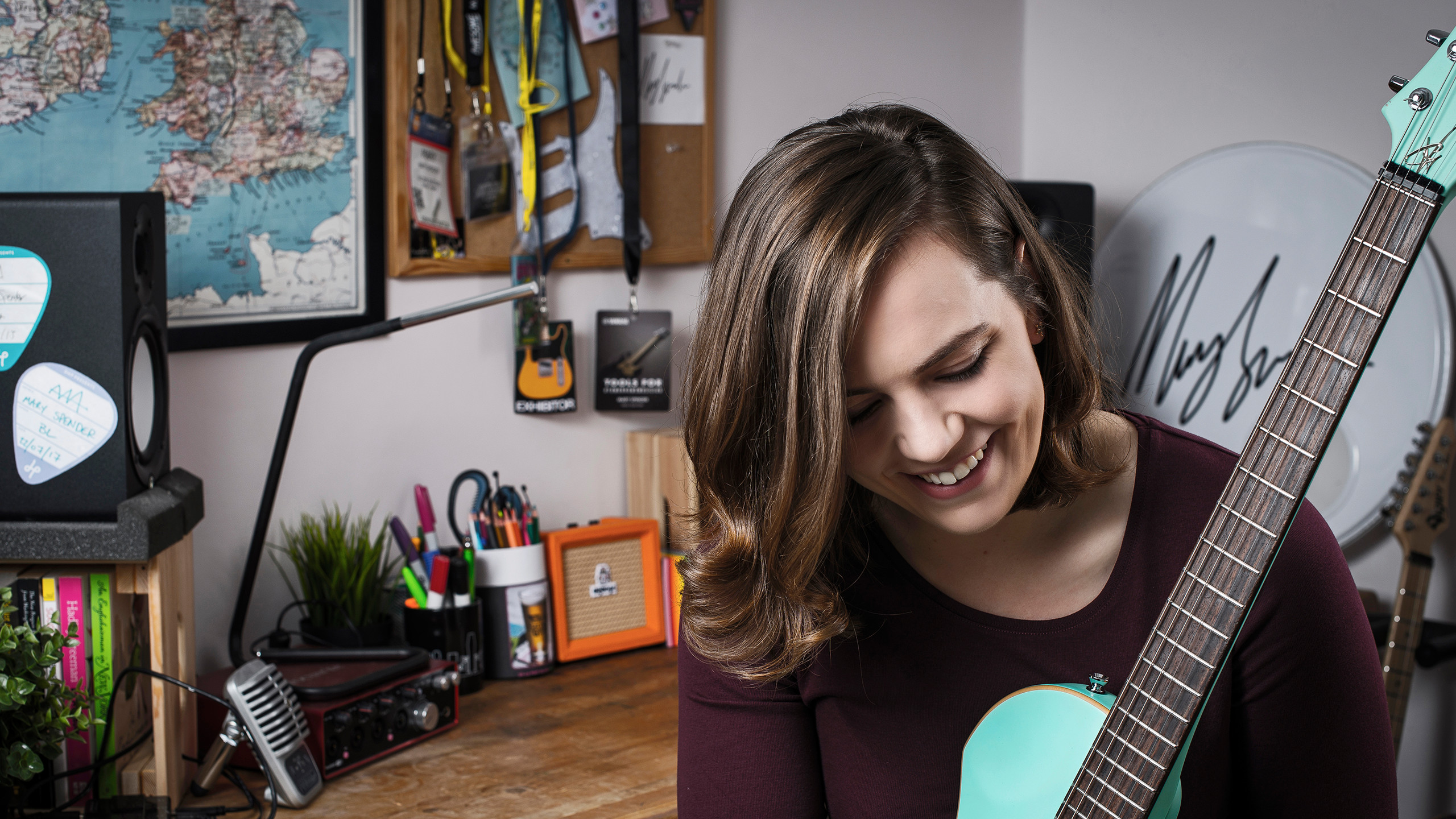 Her most recent guitar purchase is impossible to miss, however – a limited edition neon orange Music Man St Vincent signature model that most of us would certainly struggle to pull off…

“What’s not to love?!” Mary chuckles. “It’s just a crazy guitar – especially with the leopard print pickguard. I’d been eyeing up the St Vincent signatures for a really long time and then they released the super limited-edition versions to celebrate her latest album release, so I just bought it straight away. I’ve been a huge fan of Annie Clark’s music and met her briefly. It’s one of three in the world and it’s signed, so possibly an investment, too.”

There’s no use in having the perfect gear set-up if you haven’t got anything worthwhile to do with it, however, but Spender has been putting it all to good use for some time: she’s supported artists as diverse as Gabrielle Aplin and Mike Dawes recently, but is stepping up to the headline slot with a headline UK tour with a full backing band in March 2018 – something Mary is understandably brimming with excitement about.
“It’s going really well and I’m very excited as it’s my first headline tour ever,” she enthuses. “I’ve always loved performing with other musicians. I grew up playing viola in orchestras and string quartets, so I like working as a team.”

As an artist who wears so many different hats, its hard to know what Spender will turn her hand to next, but for the time being it seems like she’s happy to keep doing what she’s doing – but bigger and better.

“I plan on keeping everything up and just being consistent!” she affirms. “I’m releasing a lot of original music over the next few months and that’s the real priority. I want to do more and more videos, too, showing behind the scenes of producing tracks and making music videos. I’ve also got a few collaborations coming up that are very exciting, so watch this space!”

Mary Spender’s UK tour starts on 18 March in Glasgow, for more information about her music and videos, visit maryspender.com.