“There’s three sides to every story” Dave Mustaine on 40 years of Megadeth, defying doctors, and a reunion with Metallica that almost happened

The outspoken Megadeth frontman on why he doesn’t believe he’s a control freak, the importance of being a ‘utility guitar player’ and why he won’t be picking up a seven-string any time soon.

Even after 16 albums and almost 40 years recording Megadeth, Dave Mustaine still passionately and diligently promotes his new albums as if they’re his first. In many ways, Magedave is an interviewer’s dream – both because his passion for his current work seems never to subside, but also because he is a man who has absolutely no hesitation in speaking his mind, or airing old grievances in public. When Mustaine speaks, headlines come tumbling out.

In truth it’s hard to know whether the outspoken and controversial Dave Mustaine is actually the real him, or if he’s simply been more unguarded and revealing with his opinions over the years than he perhaps intends to be. Indeed, it’s rare that you’ll find Mustaine saying anything controversial without ultimately walking it back once confronted by said quote in isolation – whether that’s the politicians he endorses, his religious beliefs, or indeed his disowning of certain more ‘Satanic’ elements of his heavy metal past.

In the social media age however, we’re all more aware of what we say and how we are perceived than ever before, and it seems the Mustaine of 2022 has learned to avoid topics that have got him into trouble in the past. Indeed, when we press him on such divisive topics as politics or religion, his answers become borderline monosyllabic.

Mustaine might have learned to keep his own counsel somewhat, but he’s still Dave Mustaine. Love him or loathe him, he is one of the two titanic rhythm players who influenced a whole generation of metal guitarists. Without those meandering, wonderfully conceived chord progressions on Rust In Peace, the work of the soloist simply would not be as memorable – he provides the melodic pathway.

We caught up with him to chat latest alcum The Sick, the Dying… and the Dead!, extended range guitars, being a control freak and yes, his old band might have come up too – fancy that.

“Yeah! You know, I think people are comfortable seeing James [LoMenzo]. I know that for me James is wonderful to play with because of his singing ability. He’s the best singer in the band so he’s constantly helping me to reinforce my singing ability, and he’s really helped with Kiko [Loureiro] and Dirk [Verbeuren] a lot with playing, and us getting into the jam room every day.”

“So that’s been really great and you know, Kiko has been a great partner to play with, although we weren’t really as close as I wanted to be on the last record. We’ve gotten really close on this record and I think we’ve started to really have chemistry that guitar teams hope to have.” 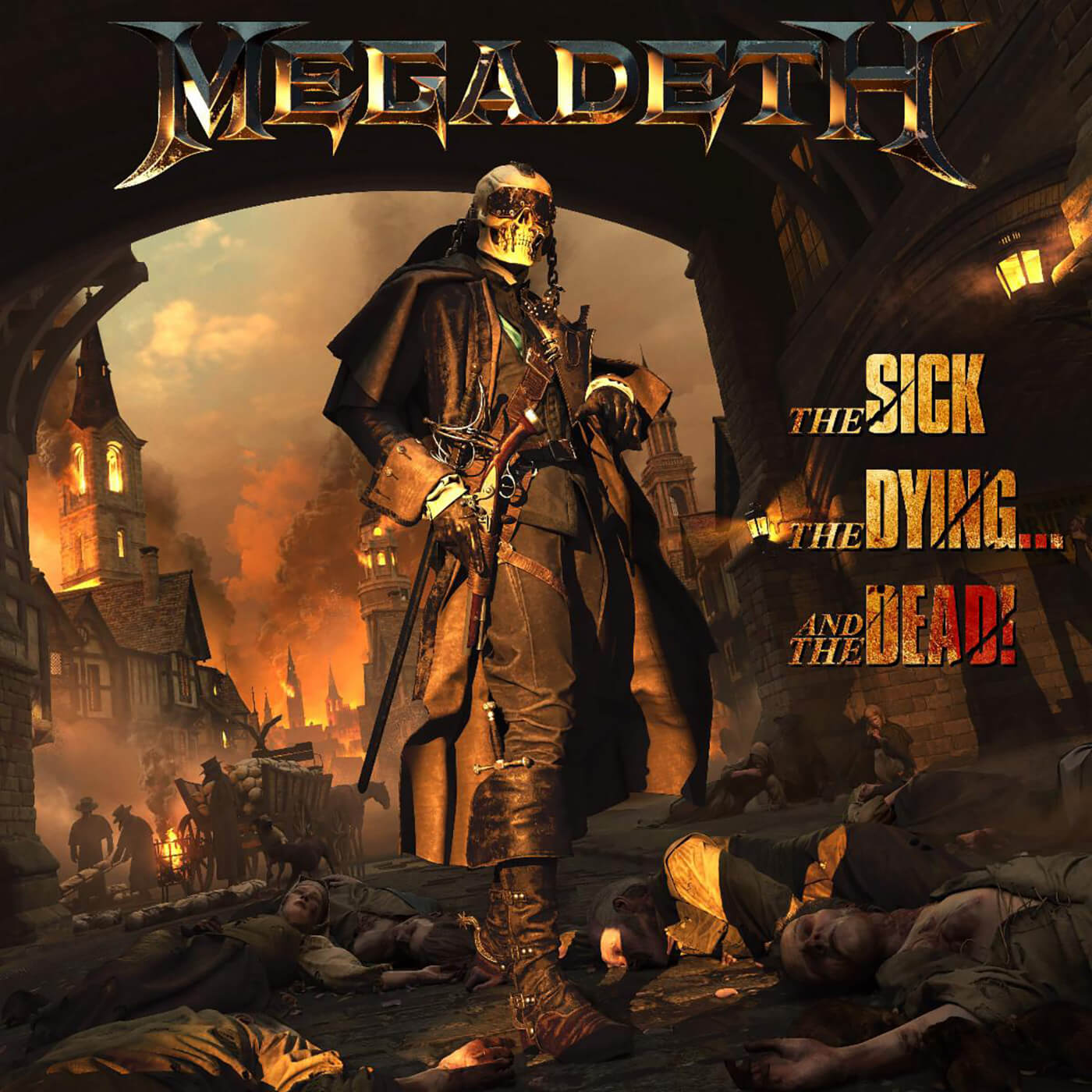 As always, you are the chief songwriter but there are many songs which have been co-written with Kiko. How does the collaboration process work with you?

“There are numerous ways. On this album the guys weren’t contributing very much on lyrics but they did contribute with some music. Of course, any of the stuff that we had from any of the old band members was cleaned out a long time ago. Any of the performances prior to the recording of this record, because remember Chris Rakestraw and myself were doing pre-production on the record at my house and it was just me and Chris for a long time, so I was doing the bass, guitar and singing; and Chris was helping me to program drum beats until we got Kiko and Dirk there.”

“And then once those guys came, we got ready to start recording, and it wasn’t short after we all got together that we found out that we needed to make a change with the bassist. Getting Steve Di Giorgio to helps us out of that bind was great.”

Kiko mentioned to me that he brought in the riff for the track We’ll Be Back, but then you helped turn it into a ‘Megadeth’ riff. How would you describe that process?

“I don’t know what he means when he says that. I can tell you what I think he means, which is just taking a riff that has a melodic idea and making it heavy. Or taking a melodic idea and making it thrash. Sometimes you can do that with existing songs, other times doing stuff like that just ruins it. So there’s a fine line that you walk when we share each other’s music. Usually, there’s three ways that it comes down; it’s your way, our way, my way”

“And so when I hear stuff it’s usually ‘their’ way, then that’s great – I know we’re onto something good and it just works. Now, if it’s really good but it just needs something, like maybe it’s played in a different key or maybe it’s played on a different string, instead of playing it up high on the neck on the low strings you play it a little lower on the neck on the higher strings, because the strings are clearer or vice versa because you want the fatter strings to sound heavier. Stuff like that you know – that’s how I would ‘Megadeth’ it up, I think.”

We are always led to believe, rightly or wrongly, that you are a control freak…

“All you have to do is look at the last record and how much Kiko wrote on it. It completely dispels the lies from the past about me not letting certain band members in the past write music. Same thing with Dirk too. So that was just a bunch of bitter ex-members complaining about ‘quality control’ over riffs that weren’t that good. If they were good, they would have been on the record.”

Where do you get your inspiration from these days? Is it still from older records?

“You know, I could listen to a record of something that I’d heard before and hadn’t listened to for a while, and listen to it again and I’ll hear something in it; it’ll inspire me.”

“Yeah, that’s what the doctor said.”

What motivated you to put yourself through such a gruelling rehabilitation process? Did you just want to fight to keep doing what you loved, or do you simply like proving people wrong?

“The doctor didn’t have permission to talk to me like that. I’m not going to allow someone like that to speak into the universe words that aren’t true about me. In my reality, when he said those things, they were untrue to me and I was not going to accept that. It might have been his reality; it might have been reality for some other people; but for me not being able to play guitar again was just not going to happen.”

Was during this time that you became a Christian?

“They were not connected, no.”

You have a reputation for being outspoken. Do you think that has benefited or hindered your career in the long run?

“There’s three sides to every story, right. There’s my side, there would be the other person’s side, and then there would be the truth which is somewhere right in the middle. You know, oddly enough that was one of the last conversations I ever had with James Hetfield because we were talking about getting back together and doing a project.”

“Something had come up about the publishing discrepancy that we have been arguing about for years and years and years, and I told James, ‘I’ll do it but we’ve got to get this stuff sorted out first’. And he said, ‘Oh yeah, sure’.”

“So I said, ‘Now these two songs you and me split, 50/50. Lars didn’t write on this song – you know that. I don’t know why you gave him percentages but I’m not. I’m not going to sign another deal that’s gonna confirm that because I never agreed to that’.”

“And James said, ‘Well, Lars has a different recollection of that,’ and I said that’s fine; there’s his side of the story, my side and the truth is somewhere. And that blew his mind, and we haven’t talked since. You know, I was trying to be really friendly with him; he told me that the last three projects they did bombed, and they wanted to go back and use all the stuff that I was on, and I said sure. As soon as I said that ‘three stories’ bit, it was over!”

People have spoken and written a lot about the solos on Megadeth records over the years, but not so much is said about the backing provided by the rhythm guitar and the rhythm section. Do you spend a lot of time ensuring that you have a great landscape for lead guitarists to express themselves over?

“I haven’t even spent any time thinking about that until just now! I do think that rhythm guitar is important, you know; it carries the brunt of the responsibility for the music since we’re a guitar-oriented band. But I think that’s the difference between a guy who’s a soloist and a guy who’s an ‘utility’ player, or a guy who is a rhythm player. A guy that’s a rhythm player is just going to play rhythm; he’s not going to venture into the unknown world of soloing. A soloist is only gonna solo and, pretty much like guys that play hockey, they just wait for the puck to be passed to them so they can shoot.”

“Fortunately, Kiko is a ‘lead’ guitar player; he’s not a soloist. He can play rhythm and lead, and his strength is lead. And mine is vice versa. I can play solos but do I have the mentality from the get go? Do I approach it like a soloist? No, I don’t. What I do is that I hear the song and then I think, what would the guitar say if it was saying something right now?”

“I wouldn’t think like, ‘have some sweeping arpeggio intro and a bunch of dive bomb parts and then double stops’ and all that shit, because I don’t know what that even means! I’m a self-taught guy that when the guitar’s in my hands; we kinda work together and make sounds. So I kinda look at myself as a ‘utility’ kind of player.”

Extended range guitars are all the rage in metal right now, but I don’t think I’ve ever heard a seven-string on a Megadeth record, are you ever tempted to give them a go?

“I’m just not, you know. I think that, where we’re at right now, with me having to play tuned to D as a necessity because my neck started falling apart. I had to have my neck fused back together and there’s a metal plate in my neck and it affected my voice. Having the radiation and everything done too [for treating throat cancer], it’s more of the same, you now – more damage to the head and neck and obviously the vocal box. So, do I see the need to have a seven-string guitar? No, not really.”

“I think those other things are kind of a gimmick for most people. Some guitar players are really great and they can work those guitars out to their favour, I haven’t found that I need more from the guitar than I can get out of it right now.”

The Sick, the Dying… and the Dead! is out now on T-Boy Records.