The Fender Custom Shop is celebrating its 30th anniversary with a limited run of guitars designed by the Master Builders who helped establish it. We play the first, and meet its maker… 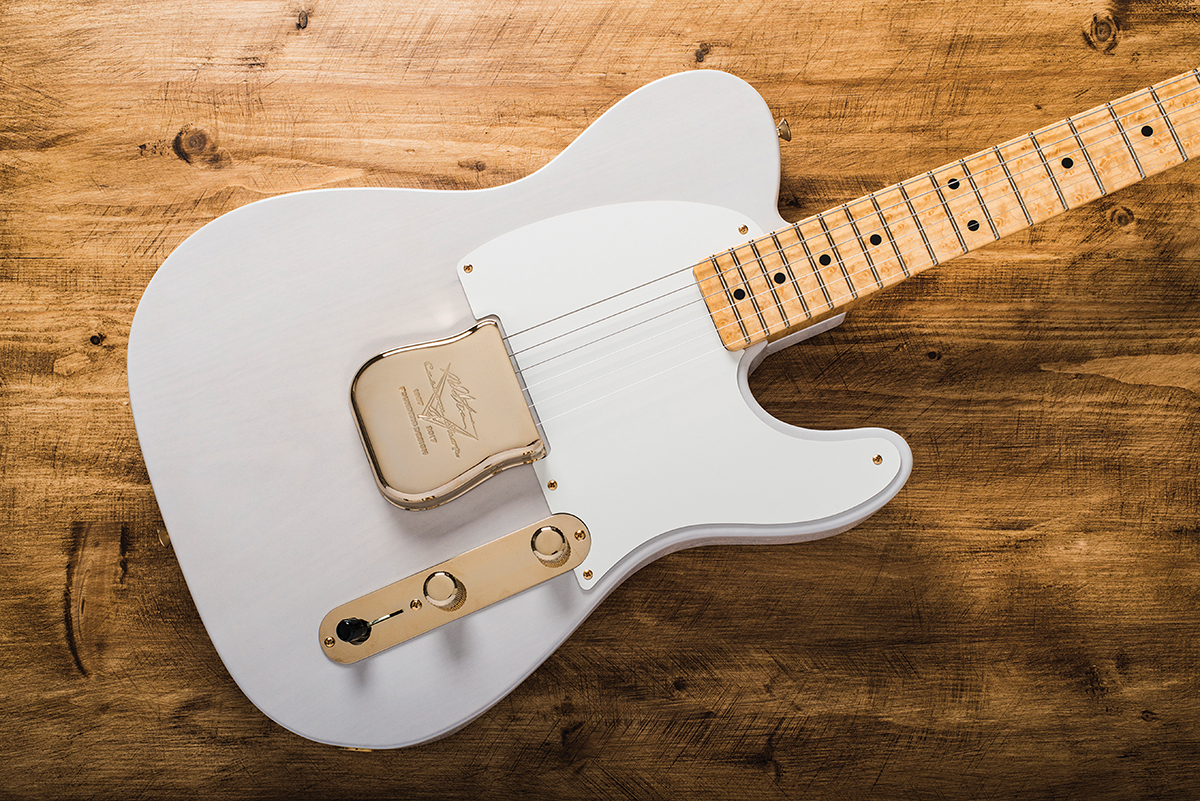 It’s 30 years since Fender established its hugely influential Custom Shop, some 40 or so miles east of Los Angeles in the town once considered the ‘lemon capital of the world’.

The mission was simple: to produce electric guitars in Corona that would roll back the years and shake off the perceived shortcomings of the company’s much maligned CBS era. From a background in vintage instruments and repairs in Texas, the widely-respected Michael Stevens was recruited in 1986 as the Custom Shop’s senior design engineer, a decision that Stevens says “made vintage heads turn”. 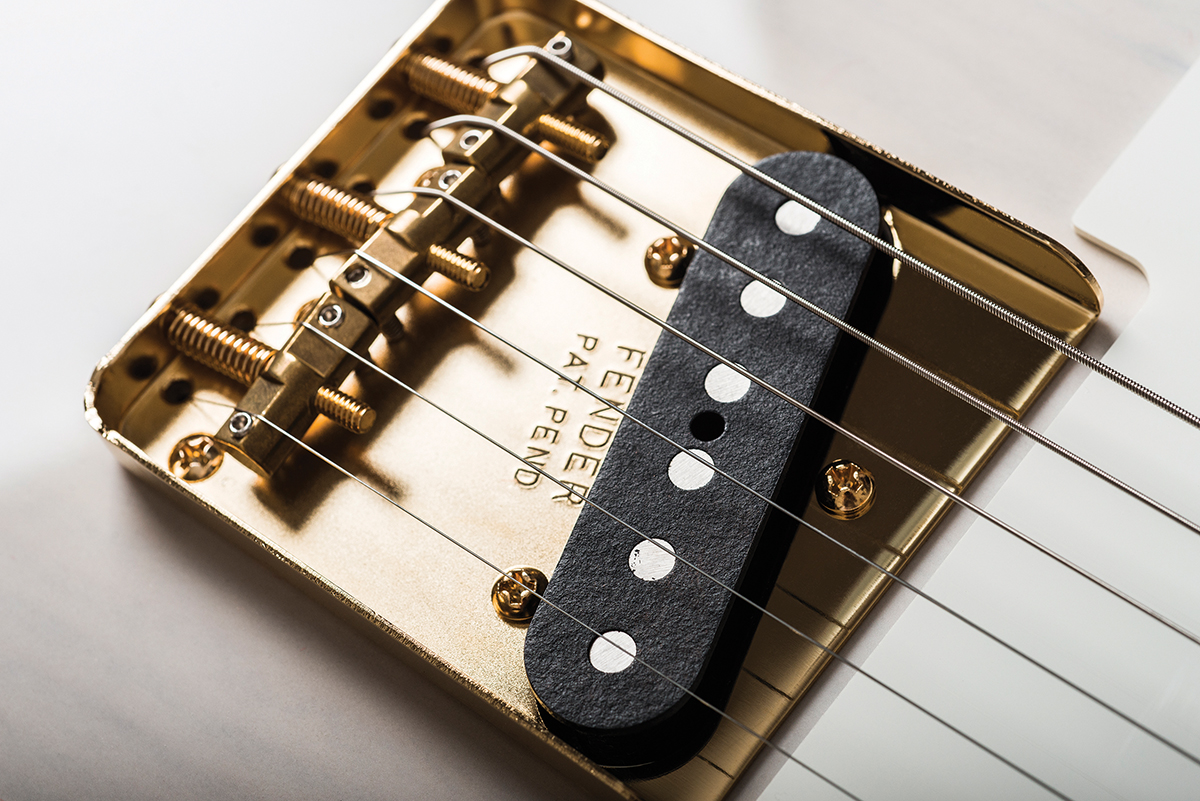 Although Fender was serious about recapturing the mojo of Leo’s prime, the first Custom Shop guitars were made by Stevens and a small team in his garage. Nevertheless they would soon be building instruments for the likes of Danny Gatton, Waylon Jennings and Eric Clapton. “On the late nights it could get goofy,” Stevens remembers, “but everybody was there working like a dog, whether they were getting goofy or not.”

During the process of creating the Eric Clapton Stratocaster, Stevens made the necks that were approved by Slowhand himself, and he even go to spend some quality time with the Brit blues legend’s fabled ‘Blackie’: “I got to sleep with Blackie under my bed and my gun under my pillow… nobody could get it!”

Stevens clearly has great affection for those early days, during which he was able to mine a treasure trove of artifacts from Fullerton. “Fender still had tonnes of stuff left over from Leo,” he recalls. “Tooling and machinery and templates… there weren’t many drawings – he and Freddie [Tavares] would draw it on meat paper and cut it out and that was that. It wasn’t until CBS sent in their blueprint guys in about ’65 that there were blueprints. Collecting all that stuff was fun. 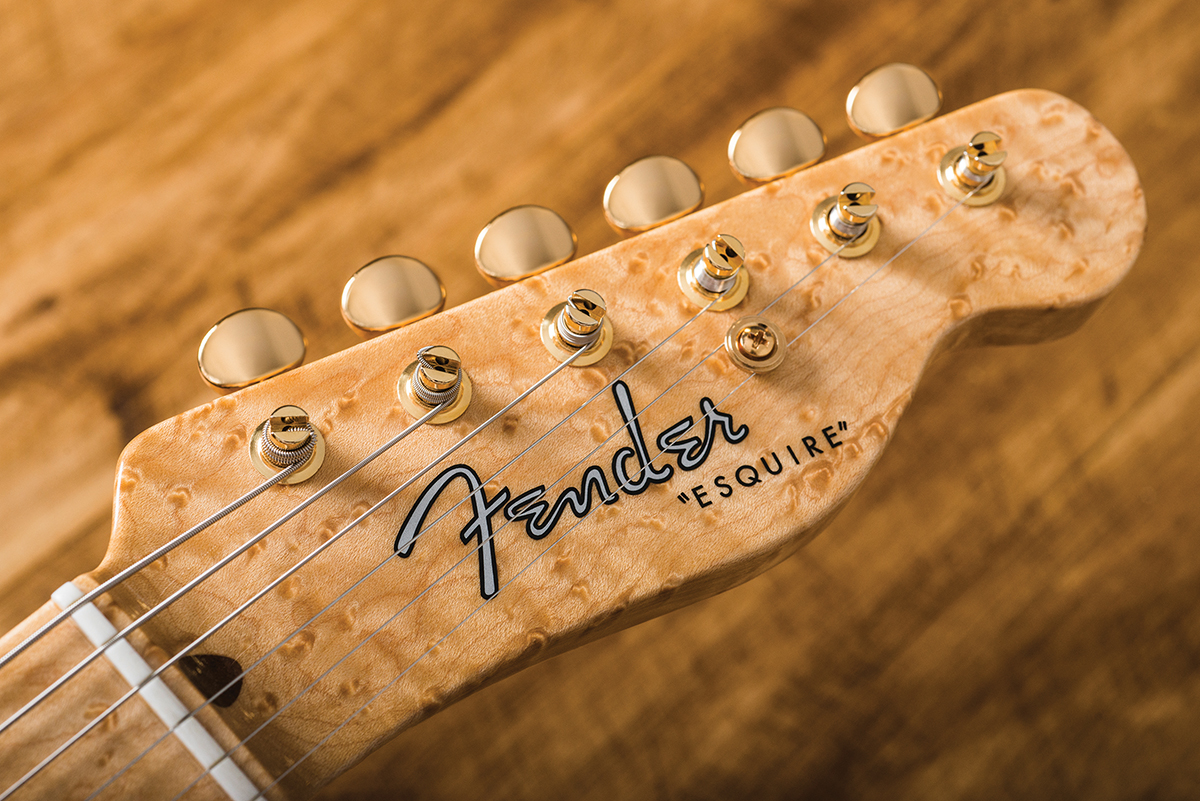 It was strewn all over the place. There must have been half a dozen variations on Tele Thinlines that I found templates for. Teles with Strat vibratos that never saw the light of day. Prototype five-strings. They experimented. They didn’t just do one and run with it. They were doing stuff back then that I was doing later thinking that I was cool!”

Three decades later, Stevens’ Founders Design Esquire sees him pay tribute to a favourite electric and also tip his hat to the first instrument he built for the Custom Shop: a Strat/Esquire double-neck with Mary Kaye cosmetics bearing the serial number 0001.

“I had an Esquire a long time ago, a dirty one with a thermometer case. I’ve got a picture of it sitting against an old beat-up tweed amp that I’ve had forever and ever. 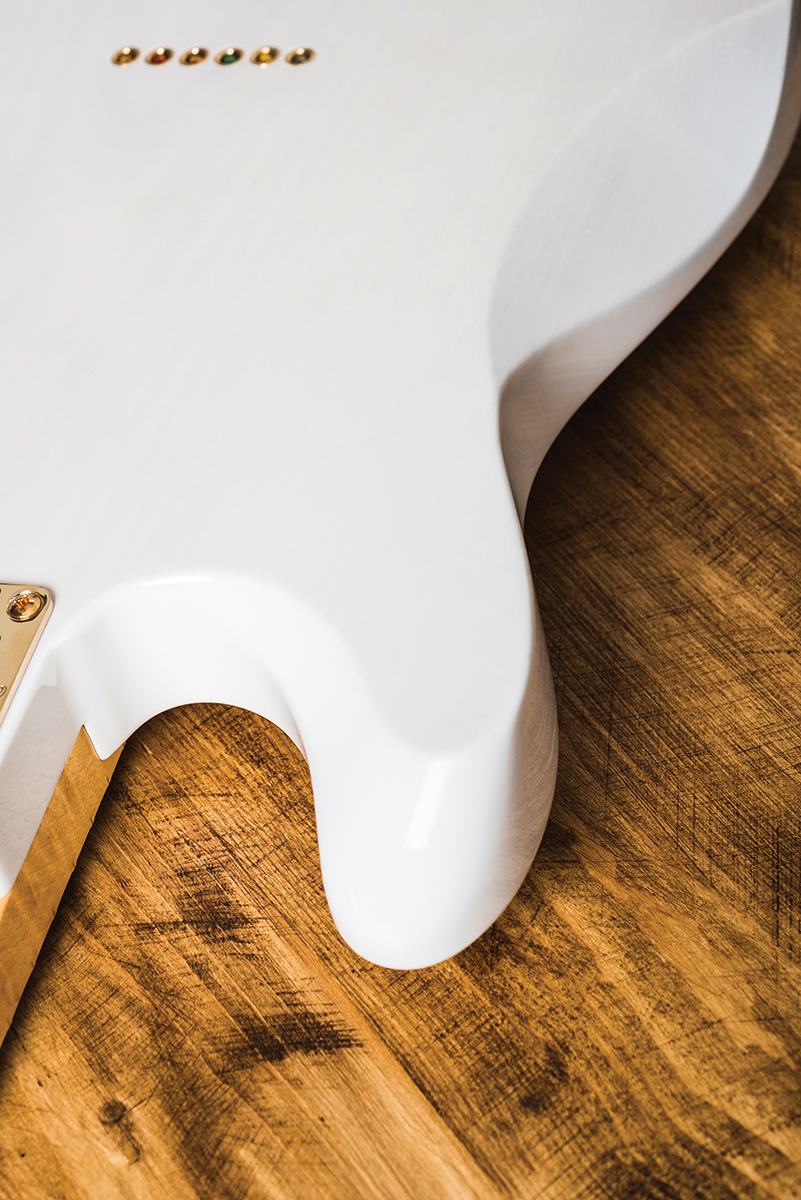 I don’t have the guitar anymore. And when I first got to Fender I did the double-neck. Before that, I had customers in Austin that really loved Esquires. I did a lot of work on them, messing with the controls and set-ups and stuff.

“So I was working on the Founders Design model and it dawned on me that it was half of 0001, the first guitar I came up with over there! So then I decided to go a little further with that and do the sassafras and the cutaway thing in the back so it’s more ergonomic without ruining it from the front, ‘cause I really think that Teles and Esquires are the coolest guitars in the world… that I didn’t design [laughs].”

Sassafras may be a relatively uncommon tonewood, but it has heritage at Fender, as Michael explains: “When I was in the vintage business I ran into some early April ’54 Strats that were sassafras. It grows in the same area you’d find ash. I figure a board just got mixed up and it came into Fender and they just ran the bodies. 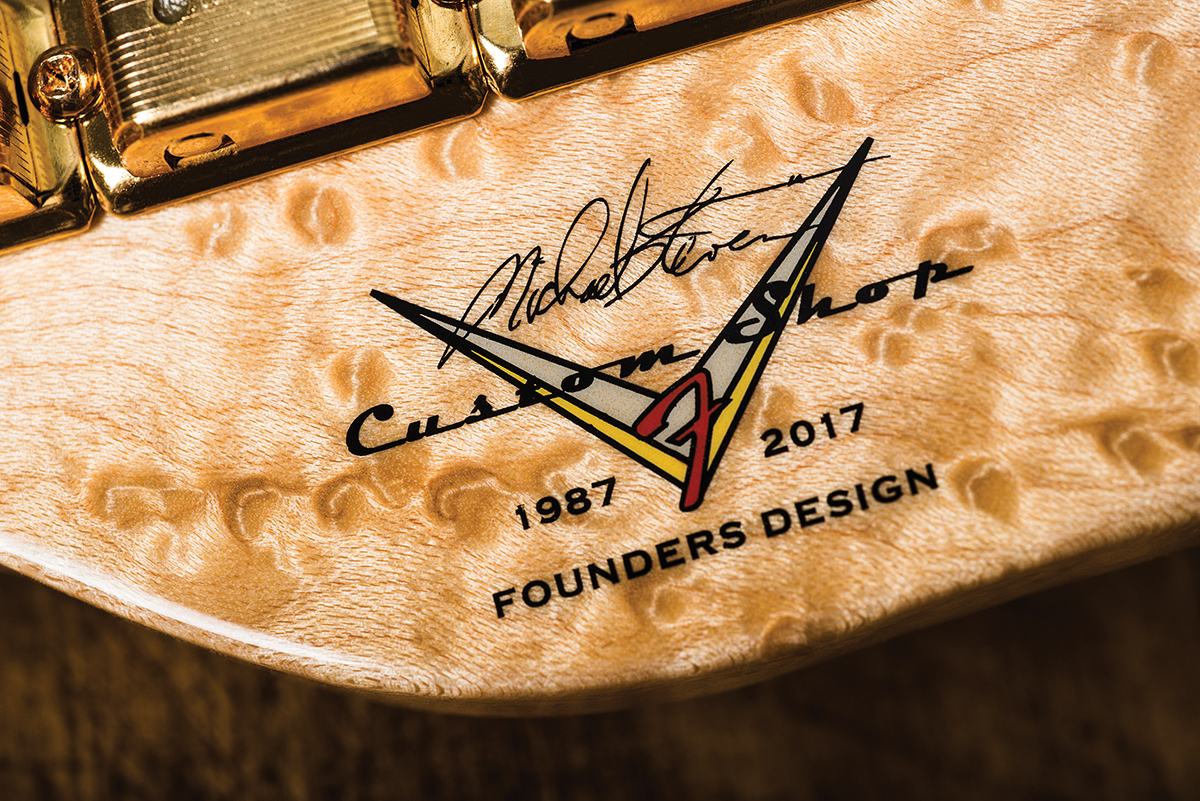 Why not? It was a different look on some of those ’54s. When this model came along I thought, that’s what I want to do. It’s got a different scoop to the tone. It’s got it’s own voice and it really rings.

“The sustain on it’s great. It’s heavier, generally than swamp ash, although you get some white ash that weighs about eight pounds before you even put a neck on it! This wood lies in a medium-ish range, like alder. A seven and a half or eight pound guitar doesn’t bother me at all – the world’s full of ’em.”

In Use
Our sample model weighs in at approximately 7.6lbs. Given that we’ve played blackguards that are well into Les Paul territory, this sassafras-bodied Esquire’s weight is a non-issue. Additional player comfort is derived from the rear contouring’s form-hugging lines, which are particularly noticeable when played in a seated position.

Acoustically, there’s a vocal quality to single notes while chords bark without sounding at all scratchy. The Esquire’s birdseye maple neck offers a supremely comfortable ride with its 50s meat subtly dressed away at the shoulder, delivering a soft-V that you’ll want to play the hell out of.

Plugged in, the reverse-slanted bridge pickup no doubt helps the guitar deliver tones with a sweet but still clear and cutting high end, and serious twang on the bass strings – the latter can of course be attenuated in the middle setting by rolling back the tone control a couple of notches. 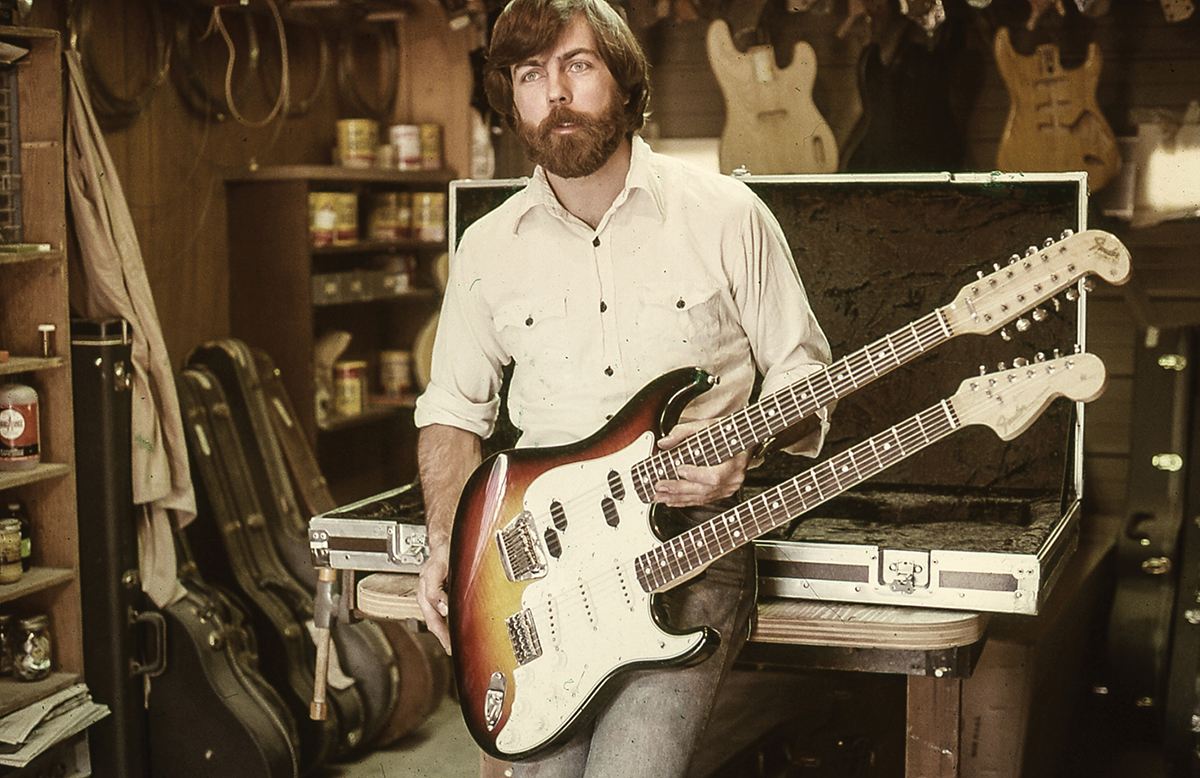 The guitar’s third voice is an intriguing, slightly nasal tone that works well with gain and sounds excellent for faux pedal-steel licks into spring reverb and even single note runs with a hint of exotic psychedelia.

Michael Stevens has proved here that there’s still plenty of room for Leo’s original solidbody electric in a modern context and added a few pleasing tweaks informed by decades of experience at the highest level of solidbody guitar making. Hats off…