Mike Stern and Eric Johnson arrived at the peak of six-stringed creativity via very different routes, but put them in a studio and the sparks fly. Photos By Max Crace 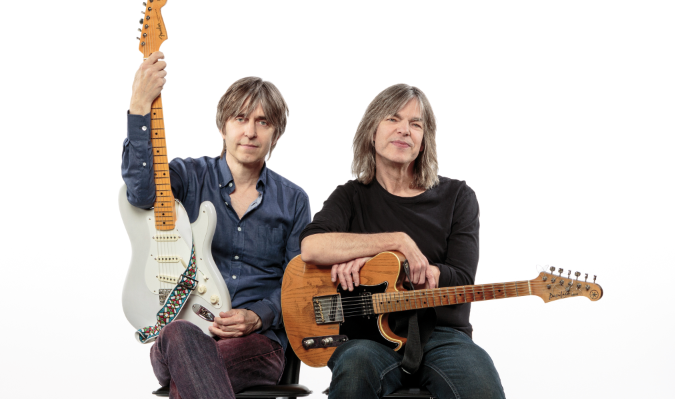 They make an odd couple – the long-haired jazzer who looks like a rocker and the somewhat neater, shorter-haired fella whose fiery riffs belie his understated appearance. Mike Stern and Eric Johnson inhabit different musical worlds, but their unexpected collaboration, first sparked five years ago, has finally made it to the record racks.

Johnson’s guest appearance on Stern’s 2009 release Big Neighbourhood started it all, but it was during a week on the stage of New York’s Blue Note Club in 2013 that the affair was truly consummated. What we hear now springs from that…and, if you YouTube it, the available footage shows two men very much at ease in each other’s company.

‘We have a good time and that’s the main thing that comes across… it’s what music should be about,’ Stern explains. The record took just three days to make in Johnson’s Austin, Texas studio – and while Eric, the credited producer, was ostensibly calling the shots, his partner now reveals he was working on loosening him up just a little.

‘I always like a live feeling to the music I play, and Eric is getting to be more like that. He makes beautiful records but they’re a little bit more produced. Now he’s letting go a little more – “letting a little more heart come through,” as he says. Even though I dig all his records, there’s something about that. Some of the rough edges give it more of a human kind of feel. Plus he makes 99 per cent of what he tries to do all the time; he’s got a real command of the instrument.

‘There’s no competing or anything like that. It’s a fun, inspiring situation with Eric and at the same time he’s very simpatico in terms of his orchestration and his comping behind my solos and I’m trying to do the same behind him. Leave plenty of space. That’s the vibe… it’s really a joy.’

The pair selected 11 tunes, more than half of them previously unheard, then added the Hendrix signature blues Red House as a closer. Mike sang on that for the first time on record, splitting the verses with Eric, and shared the singing on another tune with guest Christopher Cross. ‘Richard Bona, who sang [on Wishing Well] when I did it live, has always been pushing me to sing, so I’ve started to do a little bit, singing vocalese behind the melody. And in the case of Red House, singing the words… when I can remember ’em!

‘Singing is a trip, though. I always wanted a singing sound on the guitar. It was my first instrument, I used to sing as a kid and that’s when my mum got me piano lessons; she could tell I wanted to do something as I was singing all the time! I have never really let that go. I wanted to have that singing sound in my solos, my playing and in whatever I write. I’m never going to be a real singer, that’s hard to do, but it’s fun to do in the limited way I’m doing.’

Like many jazzmen, Stern is used to collaborations, but is unused to sharing his six-string space. ‘Most times I try to get ideas from horn players, not guitar players. Of course I used to check out Wes Montgomery and Joe Pass, still do, and Jim Hall… but in the last 20 years or so I’ve been trying to get ideas from other instruments, for a fresher approach. I like the phrases horn players do; there’s so much air in their sound. I try to get that kind of sound and touch on the guitar.

‘Eric likes that horn-like approach, too… getting some ambience on the instrument so it’s not too brittle, too staccato. He’s got some Jeff Beck stuff that I’m into from years ago but haven’t really pursued like he has. That’s so cool to me, to be playing the same instrument and come at it from such a different place. Both directions seem very cool when they gel together; he makes me look at the guitar in a different way, and I do the same for him, I think. There’s a lot of different ways you can express yourself.’

The two players are both associated with guitars they’ve made their own. Stern stays faithful to his Yamaha Pacifica 1611MS, a guitar he first made his name with while rising through appointments with Billy Cobham, Miles Davis and more. Johnson, associated with his signature Stratocaster for the last decade, strayed only for a couple of tunes. Tidal, his tribute to the legendary Wes Montgomery, saw him pick up a Gibson ES-175 – a logical enough choice, as the jazz guitarist favoured Gibson semi-acoustics.

But on Red House Eric elected to use a 335. ‘It was just to give it a little bit of a different twist. I’ve recorded and played it live before and it’s always been the Strat. I love Jimi’s version, but this time I used the 335 and played a few Clapton licks to make it a little different!’

The Texan’s favourite of his contributed compositions is Benny Man Blues – ‘my own spin on a Benny Goodman and Charlie Christian kind of vibe’. The duo’s version of Dry Ice, reclaimed from the repertoire of Johnson’s ’70s band the Electromagnets, proved a popular set closer at the Blue Note – hence its inclusion here – but his favourite number on the album is one that Mike wrote. ‘I know it’s a re-done tune, but Remember is cool and indicative of the band.

It’s got a head, and it’s got this whole blowing section and that’s the premise of the whole band. We have these songs with heads, and then we just play.

‘The song was cut live and, even though I’m bringing this rock influence to it, it’s all about that openness, that interplay. Benny Man’s Blues has the same thing in it…’

Elsewhere Bigfoot, contributed by bassist Chris Maresh, has shades of Miles Davis’ Bitches Brew, while Stern’s Sometimes gives Johnson the chance to dust down his acoustic. Drummer Anton Fig, noted for his work in the Letterman house band, is in fine form, and Stern, who loves linking his playing with percussion, emphasises how happy he was to record as a group.

‘Everybody was there, which was nice. People send files [these days] and for certain kinds of music that works, but for this kind of music the spontaneity and last-minute ideas, when the drummer does this and you do that on the spur of the moment… there’s no other way to get that interaction.’ 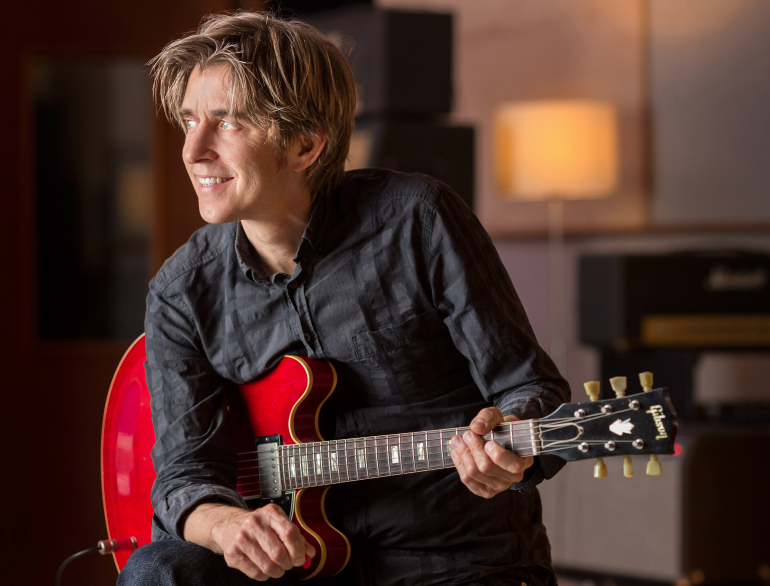 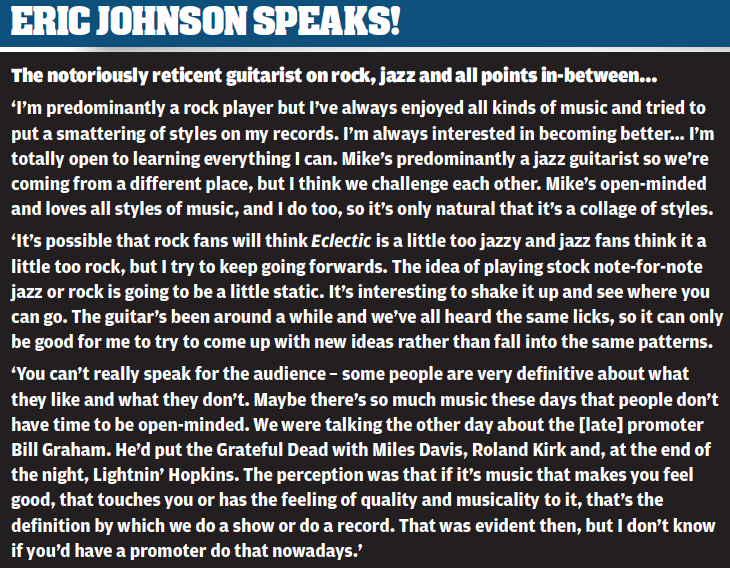 The album’s opening track features vocalist Malford Milligan. ‘He’s a badass singer from Austin,’ recommends Stern. ‘I’d recorded Roll With It before, but it was instrumental. I wrote words for this project thinking Eric might know a singer. Eric gave me an example of what the guy could do, and Malford came over and sang the shit out of it. That’s how the project was – we did it pretty much on the fly.’

German-born Magdalena ‘Leni’ Stern, Mike’s wife, is a singer-guitarist in her own right, and appears on the record playing n’goni, a Malian instrument best described as a cross between a banjo and a guitar; check www.lenistern.com for details.

‘Eric’s always been a fan of hers, especially the later stuff,’ explains Mike, ‘and he checks out a lot of different people. He said Leni’s stuff is so fresh, especially the African direction she’s going in. We did a couple of takes with her to see if it would work, and we used both of them as intros. So that was really cool. We made last-minute decisions, that is how that happened with Leni too.’

The pair don’t gig together, but make time to hang out on the road or in the studio. This year found them teaming up as teachers at a guitar festival in Montana. ‘We will probably do it next year, and maybe Eric will come too. They had Lee Ritenour and that blues cat Joe Bona… what’s his name? Bonamassa, he did that. There were classical and jazz players, it was really cool.’

The Road Awaits…
Mike Stern’s diary is never empty, and future projects include collaborations with trumpet player Arturo Sandoval, a hoped-for collaboration with Steve Lukather, a tour with Randy Brecker in the spring in Europe, and an Australian tour with Davis tribute Four Generations Of Miles.

But ask him who his perfect partner, living or dead, would be to repeat the Eclectic experience and the first name that comes to his lips is an impossible choice – Jaco Pastorius. (Stern spent 1983-84 touring in the late legendary bassist’s Word Of Mouth band before he returned to Miles Davis for a second stint in 1985.)

‘We were so tight, Jaco and me – we used to play all the time. He’d come up to New York and we had a lot of help from “better living through chemistry”, which didn’t work out so well! I finally got totally sober and he didn’t, which is a tragedy. He used to want to play all the time, just me and him in a room practising. I would have loved for him to be around and do more with him. 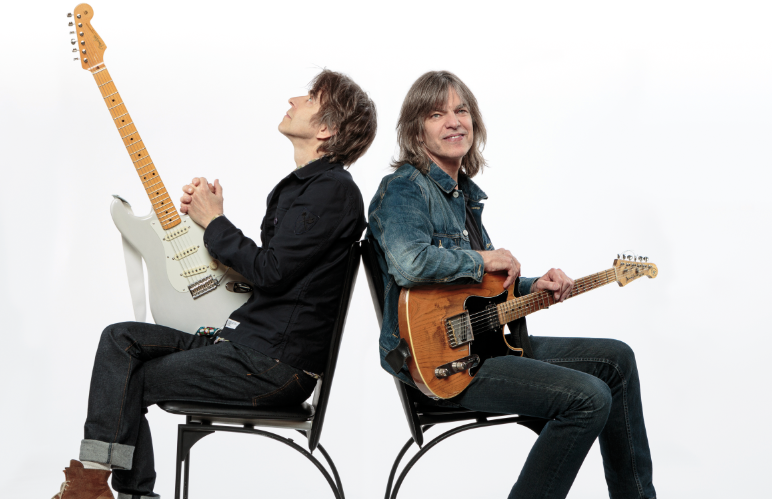 ‘Wes Montgomery would be fun, or Hendrix of course. They’re the two obvious cats. I wish I could have done more with Jim Hall, who just passed; he was so inspiring. There were a couple of possibilities, but we had to put them off – he was eighty-something.

‘Of the guys who are alive I’d like to play with Herbie Hancock, or Chick Corea. I’ve recorded a little bit with Herbie – maybe I’ve played with Chick, I forget, but I played with Herbie on a Michael Brecker record. It was a ball, just amazing.’

All these are names to conjure with. For now, though, the road awaits for Mike, Eric and their eclectic guitars.