Ahead of the release of the Swedish progressive metal band's 12th album, Sorceress, Opeth frontman Mikael Åkerfeldt (centre) shares his tips for aspiring musicians trying to make it in an increasingly cut-throat music industry… 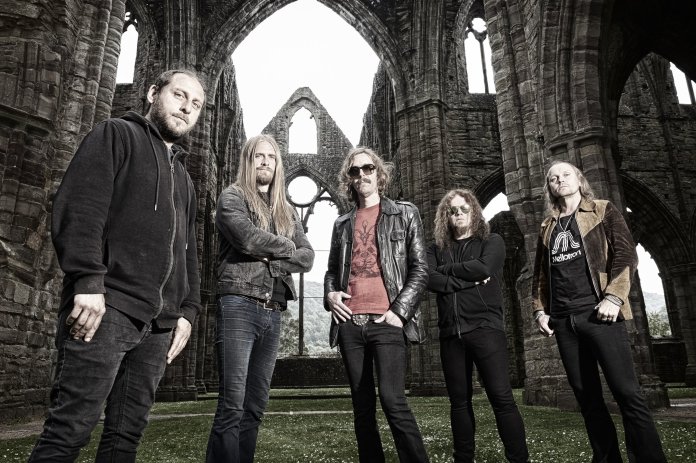 1. A real musician doesn’t take advice
“I love that quote. I heard it somewhere, and I think it’s really important if you’re true to your art. It should be number one! Now I’m going to follow it with the advice…”

2. Practise makes perfect
“I’m a guitar player and I also write songs. There was a time when I just wanted to be a shredder, and if you want to be a shredder all you have to do is practise, find inspiration, emulate other guitar players’ sounds so you understand how it works and have a vast array of influences so you don’t get stuck sounding like your idol. You need to have lots of different influences and you have to work on your tone. Practice is really important.

“If you’re going to be a guitar player, it’s probably better to nail down your rhythm guitar playing first, and that’s how you’ll pick up how to write your own songs – that’s more important than being the boss of shredding! You need to get the rudimentals down before you start shredding, and listen to simple stuff and start playing simply first before making it gradually more advanced.”

“I never had that catapult into rock stardom, from being a nobody to a somebody overnight. It still surprises me when people recognise me in the street. I guess I am humble, but my profession is as a musician who puts out records, and we get seen in magazines and we’re out touring, and people tell me how great I am.

“To a certain extent the ego’s got a boost, but I still think that I’m humble. I have perhaps a slightly bigger ego than my neighbour, but it doesn’t make me a cock! I like to see myself as a normal, humble guy who just likes music.”

4. Consume a lot of music
“It’s very important to consume a lot of music. I’m a record collector myself and it’s kind of passed over into sickness territory – I buy a lot of records! I love music and I love vinyl. It’s a thing that most people would think is OCD behaviour! You’ll probably start with the music you want to play – if you want to play heavy metal, yeah consume a lot of metal music.
“But you also have to consider there are a lot of metal bands out there, and generally the ones that make it are the ones that have a sound of their own. If you’re consuming only metal music, you might end up sounding like ‘just a metal band’. If you want to broaden your senses, you’ll need to go outside of metal. Be open-minded, too.

“Don’t force it, but if you think ‘fuck, I love jazz music’ but I’m in a metal band, it’s good to start consuming jazz music. There can be no wrong with having lots of influences. You will benefit from having a wide taste in music.”

5. Persevere
“This is very important. A lot of people think it happens overnight and once they’ve formed the band, the next step in life is stardom! That’s not going to happen. Keep going at it and don’t give up too soon. With Opeth, I’ve been in the band since I was 16 and we had a good 10 years with no money.

“We couldn’t make a living and every day was a struggle, thinking ‘maybe I should get a job’. So persevere and commit yourself. A lot of bands run into trouble because they have day jobs. This is not a recommendation, but It’s maybe good for a while to stop everything else but music and suffer for a little bit. I was struggling between education and jobs, and I quit a job I loved in order to focus on music full-time, and that was like going into the dark for a little while because I didn’t have anything.

“Eating noodles, eating macaroni with salt… this one doesn’t apply to aspiring musicians who have kids! It’s good to be one with your music, find your inner place and make the only thing in your life music. You have to turn your back on everything else for a little while.”

6. Play as many gigs as you can
“Playing shows is more important than a band’s Facebook page, ultimately, because you’ve got to be out there showing yourself in the flesh. Every fucking kid on the planet with rockstar dreams, the first thing they will do is start a Facebook page. It’s more important to try to get shows. Be persistent, be a pain in the arse. I wasn’t like that, but luckily we had a guy in the band who was like that for getting us shows.”

7. Be in a band where there’s democracy
“This is important from the get-go. As it goes along, you’ll see band members dropping off, and their hearts won’t be in it a few years down the line. Maybe the band situation will be watered down to where there is eventually a leader, which is not necessarily a bad thing, but it’s important to have the idea of democracy at least.

“In our band, even though it’s to a certain extent a democracy, I do call all the shots and write all the music, but I do believe in the idea of democracy. You can do that in different ways, like everyone having a station to take care of. If you’re the bass player, you’re going to focus on that and be the best bass player you can be, but there are other practical things – someone books the shows, someone fixes the equipment, whatever. Try to make it a team, where everybody in the band is valuable.”

8. Get a good drummer
“If you have dreams to be in a band and you’re a guitar player, the next most important guy in the band after yourself is the drummer, so get a good one. The widest extension of your own abilities is to have a drummer who can take the band to the next level – and generally if you have a good drummer you’re going to be a decent band, it’s very important.”

9. Make great demos
“I write demos for all the instruments. Even if I can’t play drums, with synthetic sounds you can make it sound really good. I make a demo that sounds really good. That’s my way to get the other guys interested. I want to intimidate them, make them feel like ‘fuck, that’s a good demo, the drums are going to have to top that’.

“That’s kind of kicking them in the arse to perform better, and they always do. Generally, the way I write music, I don’t feel I have many boundaries in terms of my musical taste. My record collection and the stuff I listen to, it can rub off, and get me inspired to write something that’s going to end up in Opeth. I learn everything from being a musical consumer. I’m a product of my record collection.”

10. Go back to a simple setup for inspiration
“I don’t have that ‘one’ guitar. I have so many that the connection I had back in the day when I couldn’t afford to have more than one guitar that’s beaten up and broken and stuff isn’t there. I had more of a connection back then. Now I use my guitars as a tool, and I don’t have one that’s more important than the others.

“It’s more pedals. If there’s a sound that I love, it inspires me to write – like a nice spring reverb. My ultimate set-up is a PRS with two humbuckers or a Strat on the neck pickup through a little amp, clean sound, or slightly dirty with spring reverb and a Small Stone phaser.

“Then I can sit around for hours playing. I love that simple rig. The other stuff, the rig I tour with, is complicated – I don’t even understand it, but it’s like a tool to make everything work. But when I’m playing alone for myself, and no one can hear me, that’s when I’m playing the best, and I have a clean sound with a little spring reverb. That’s kind of how I worked out my tone, through a very humble, small setup.”

Sorceress is released on 30 September 2016. Visit Opeth online for more.

You can pre-order ‘Sorceress‘ at iTunes, Amazon and in a variety of formats (coloured vinyl & special bundles) at nblast.de/OpethSorceressNB.
Opeth also play Wembley Arena on 19 November. Tickets are available at www.livenation.co.uk.
Advertisement