Work on Bernie Marsden’s amplifier collection continues as Rift’s Chris Fantana gets to grips with a rare Marshall combo. 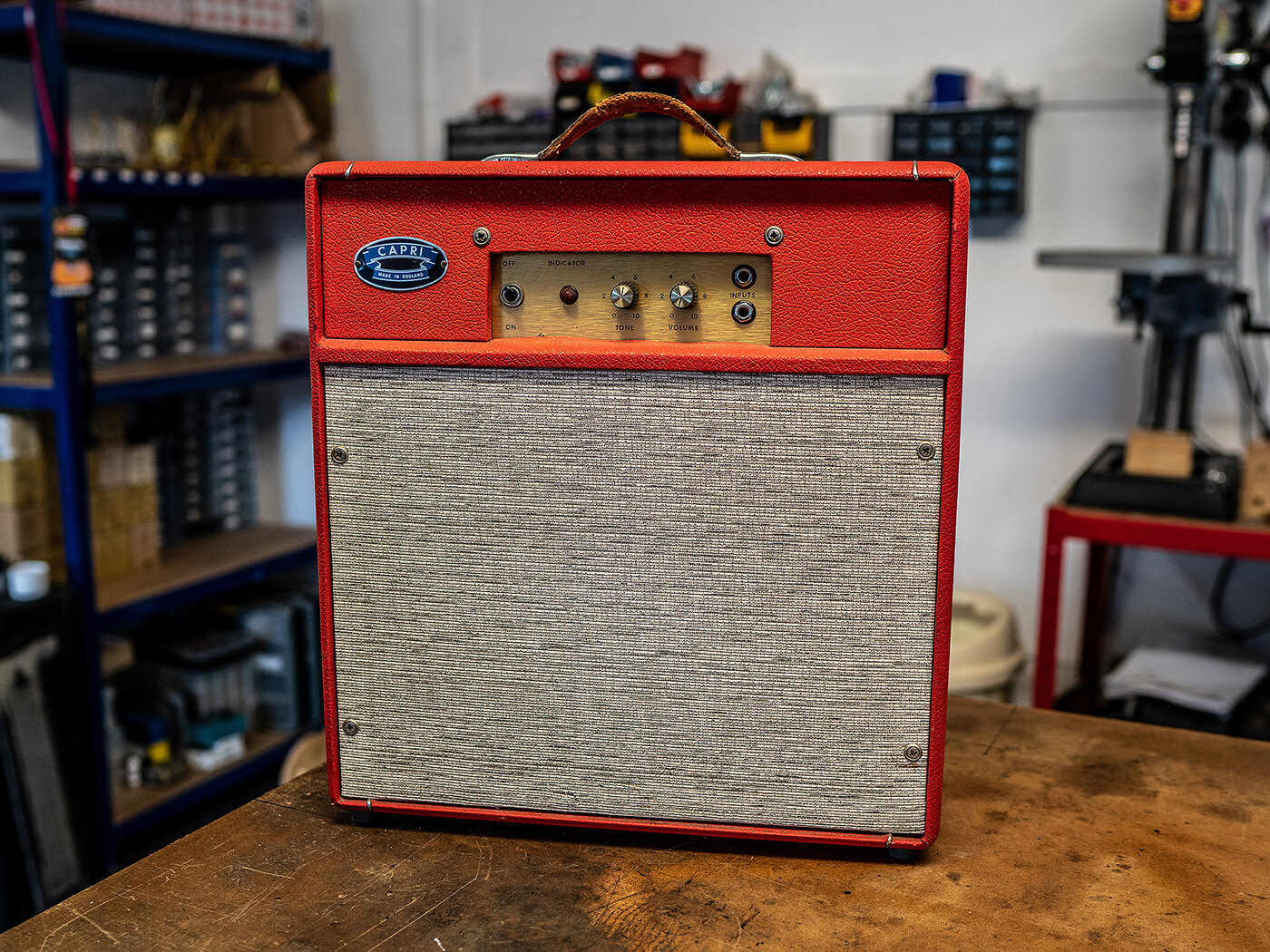 The Marshall Capri – although this one is missing a logo

The latest amplifier we’re taking a look at from Bernie Marsden’s collection is a mini-Marshall dressed in bright-red tolex.

The Capri was one of Marshall’s famous ‘catalogue’ amplifiers – models only available by mail order – and, according to the chassis label, it is rated at seven watts. I cannot find a schematic either online or in any of my old service data books but as it is quite a simple circuit, drawing it out took all of 15 minutes.

I’m finding it difficult to confirm exact shipping numbers on the Capri, but general internet wisdom reveals that approximately 100 units were made, with most around 1969 in an unusual 2×8 format. This taller version dates to September 1971 and unlike other 1×10 examples found online, is factory loaded with a 13-inch x 8-inch elliptical speaker.

Those familiar with other low-wattage amplifiers such as the Fender Champ and Vox AC4 will see similarities in the circuit topology of the Capri. There’s a single ECC83 providing two stages of amplification before a single power valve in the output stage, an EL84 in this case – a simple formula that is surprisingly toneful.

The circuit has two inputs, one high and one low, using the now ubiquitous pair of 68k grid stoppers and single 1M grid leak resistor found in nearly every amplifier since the late 50s.
The first gain stage (one triode of the ECC83) is biased warmer than the second stage, pushing the operating point more towards class A and therefore generating more harmonic distortion when the stage is pushed into overdrive.

The second Gain stage is operated closer to the centre point of the load-line, allowing less distortion but much more accurate reproduction of the signal, before being worked on by the tonestack.

Speaking of which, it’s a simple volume and tone arrangement feeding into the control grid of the single EL84 output valve and, just like nearly every other single-ended output stage, it is cathode biased.

A feature not commonly seen in a guitar amplifier is a Zobel network, consisting of a capacitor and resistor in series placed across the output transformer’s primary winding. Its function is to help minimise the impedance rise of the speaker above the resonance frequency. In very simple terms, it helps smooth out the sound.

As I mentioned earlier, the amplifier drives a single elliptical speaker made by EMI. Due to the small magnet, I would guess it is rated for 10-watts or so, with quite a wide frequency response. I can’t find much information on this particular speaker, model 92390CAZ, but the non-CAZ model was widely used in hifi equipment of that era.

A quick listen through our bench amplifier reveals that it’s quite well suited to a low-wattage application, although not exceptional. An interesting choice then, and it perhaps confirms the theory that these amplifiers were built using leftover parts around the factory.
The amplifier itself is great fun to play and I’ve found that it is particularly good at reproducing Stratocaster ‘quack’ in positions two and four. My rosewood-board American Strat with 50s pickups does a great funk impression.

A PAT test sticker shows that this amplifier was last safety checked in 2007 and, judging by the condition of the two large electrolytic capacitors, it hasn’t had much attention since then. Just like the Gibson amplifiers that we’ve serviced recently, Bernie wants to put the Capri to work so when the parts arrive, we’ll be giving it the attention that it deserves.