Amp FAQ: What is a cap job and what do filter caps do?

Over time, many tube amplifiers end up suffering from bulging, leaky capacitors and it can make them noisy or unusable.

Hi Chris, I recently took my Marshall JCM800 into my local tech because it was making an awful hum and he said that it needs a cap job, what does this mean?

Chris Fantana: Much like the tyres and brakes on your car, there are components inside your amplifier that’ll wear out with everyday use. Potentiometers, sockets, and switches all have a limited lifespan and will eventually need swapping out. Unlike your car, however, there’s not a service schedule for your guitar amplifier that handily explains when things are likely to expire. Unless you know what to look out for, it’s usually a case of ‘wait until it fails’.

There are some components inside your amplifier that are highly stressed while doing a very important job. These are called the filter capacitors (aka smoothing caps) and sit in the high-voltage rail. Their job is to smooth out or filter any ripple in the rectified high voltage that feeds the valves. 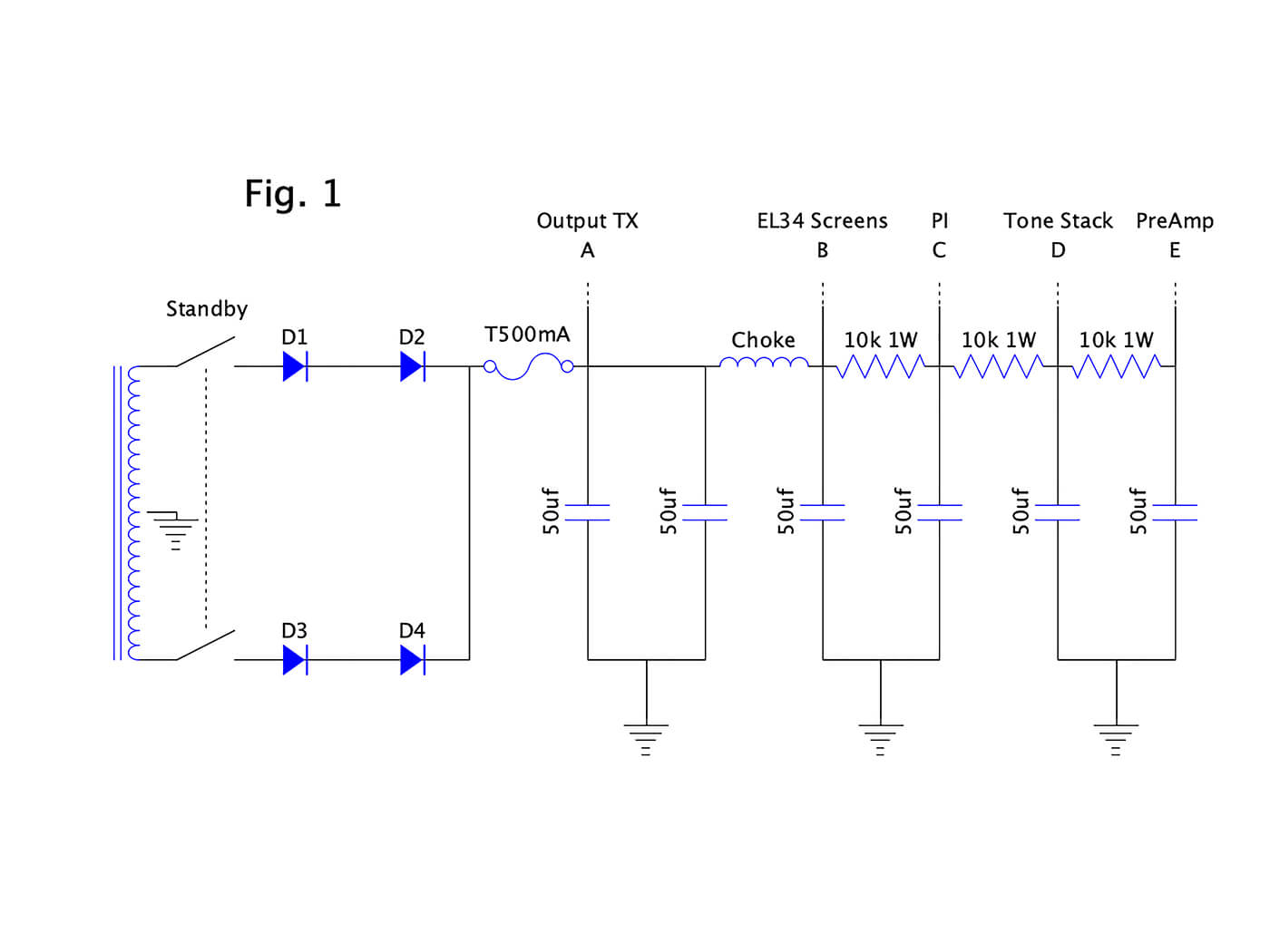 Fig.1 shows the HV rail from a 50w JCM800, model 4104 (the combo version of 2204) that recently came in for the same complaint. On the left, we have the transformer, standby switch, rectification diodes, and the HV fuse. On the right we have six 50uF capacitors – these are the filter caps that we’ve been talking about. In this instance, they’re arranged in three groups of two. This is because, in this amplifier, the physical caps are packaged exactly like that. The two-in-a-can format is pretty common and thankfully, replacements are still manufactured today.

Each capacitor or ‘node’ along the rail is given a label, in this case A-E. Each node is where the HV DC is tapped off to feed the various parts of the circuit. I have annotated each node so you can see what is fed from where.

If we look at node A, we see that it feeds the output transformer. The DC is fresh from the rectifiers at the point, so needs quite a lot of smoothing and filtering to make it useable. The two 50uF capacitors at this node are wired in parallel, creating a single 100uF capacitor capable of a large amount of smoothing. This capacitor is also known by a different name – the reservoir capacitor – and its primary function is to store the bulk of the energy of the whole amplifier.

Node B is placed after a choke – we’ll discuss the function of these next month – and has a single 50uF capacitor. The screen grids of the output valves require cleaner DC than the output transformer, so additional smoothing is required. Then as we go down the rail towards the final node, E, we see that each stage is smoothed further still. The preamp section of the amplifier is the most sensitive to noise, so this stage must have the cleanest and most noise-free DC.

Image three shows the three capacitor cans removed from the JCM800 combo, and you can see that each has erupted from the centre relief, spewing electrolyte onto the outer cover. If this amplifier was regularly inspected by a technician, they would have noticed a bulge forming in that spot, indicating that the capacitor was no longer serviceable, and required replacement. A capacitor can also be tested electrically, checking both the capacitance and electrical leakage.

Replacing these caps is fairly easy, although can be quite a time consuming depending on both the quantity and location of each capacitor inside the chassis. Fortunately, it’s not a job that must be done regularly with most needing replacement every 10 years or so, depending on usage.

Visit riftamps.com to find out more about Chris Fantana’s range of boutique amplifiers.