A brief history of Gretsch guitars

It’s one of the oldest surviving names in American instrument making, but the Gretsch guitar story is one of the most unique and tumultuous in all of guitar.

“That Great Gretsch Sound” has been 135 years in the making – and counting. That’s how long Gretsch has been making musical instruments, starting out as a drum manufacturer in the latter half of the 19th century, before becoming one of the world’s most beloved guitar brands.

In the decades that followed, Gretsch earned a reputation for pushing the technical and technological boundaries when it comes to instrument manufacturing, and this reputation saw them earn favour with some of the most iconic guitarists of all time.

From Chet Atkins and Duane Eddy, George Harrison and Pete Townshend, to John Frusciante and Jack White, the brand has pulled in a diverse and enviable list of disciples over the decades, but it all started, as so many American guitar stories do, in Germany.

Gretsch’s origins can be traced all the way back to 1883 when Friedrich ‘Fritz’ Gretsch, a 27-year-old German immigrant, opened a shop in Brooklyn dedicated to crafting banjos, drums and tambourines. Fritz had been a bookkeeper for another banjo and drum maker in Brooklyn, Albert Houdlett, and the Gretsch shop was a chance for Fritz to take what he’d learned and strike out on his own.

The company enjoyed modest success catering for marching bands in those early years, but Friedrich would die just 12 short years later at the age of 39. Stewardship of his shop passed to his wife, Rosa and to his son, Fred, who was just 15 years old at the time. Rosa was encouraged by many to sell the shop to provide for her seven children, but she was determined to fulfil her late husband’s dream.

It helped that young Fred was no ordinary teenager. As his grandson Fred W Gretsch, the Gretsch family was blessed with the “entrepreneurial gene, not the artistic gene” and within two decades Fred had grown the company to become one of the premier instrument manufacturers in the USA.

The Gretsch Manufacturing Company was incorporated in 1903 and by the time the first World War broke out, Gretsch had six properties across New York City, including a 10-storey factory building on Brooklyn’s Broadway that remained owned by the Gretsch family until 1999.

Fred had a keen marketing mind and a knack for understanding what products and trends would move the needle of public demand. And as the roaring twenties became the 1930s, he realised that there was a growing market for a new instrument – the guitar.

Guitar’s not yet the star

The first Gretsch-branded guitar arrived by 1928, but at the time was one of 3,000 instruments that the Gretsch company offered in its catalogue. Like most of its competitors initially the company targeted the popular jazz and country musicians that dominated the airwaves in this era – broadcast radio having exploded in America in the post-war period.

At this time, however, Gretsch was still primarily a drum company, having revolutionised the construction of drum shells in the 20s and had built on that success further with the revolutionary Broadkaster set.

In 1935 a 19-year-old named Charles ‘Duke’ Kramer joined the company making $11 a week polishing horns. It was the start of a 70-year association that would change the course of Gretsch and its guitars forever.

Duke wasn’t polishing horns for long, and soon he was travelling all over the southern United States as a purchasing agent, visiting music shops and finding out exactly what they wanted so that he could funnel this information back to Gretsch’s HQ.

In 1941 Duke was drafted, and served in the Special Service Music Division in the Pacific theatre – putting on entertainment for the troops and getting a first- hand glimpse at the musical trends that would amalgamate into ‘pop’ music in the post-war era.

The Second World War was a period of great transition for Gretsch. Fred Sr retired in 1942 and left his son Fred Jr in charge of the company, but not long after he was drafted. His brother Bill took over the company on an interim basis, but wartime restrictions on metal use meant that instrument makers were left unable to produce their wares – something that was particularly true of drum makers such as Gretsch.

Instead, Bill turned Gretsch’s factories over to making ‘entertainment kits’ for servicemen, including ukuleles, ocarinas and harmonicas by the thousand. Bill sadly passed away in 1948, causing Fred to leave the navy and return to the company his father had entrusted to him.

Fred Jr and Duke Kramer came out of their service with a vision for a future of Gretsch that elevated the newfangled electric guitar to the company’s primary focus. The pair teamed up with country superstar Chet Atkins and longtime consultant Jimmie Webster to totally overhaul the look, sound and image of Gretsch guitar – The Great Gretsch Sound was born.

Gretsch had a long history of artist relationships on the drum side, and driven by Kramer, this would become a key facet of how the Gretsch guitar brand would explode in popularity. Kramer was happy to provide custom instruments to artists, with no request too unreasonable or out of the question.

This commitment to pushing the boundaries meant that by the late 50s, as well as country superstar Atkins Gretsch counted rock ‘n’ roll trailblazers like Duane Eddy, Eddie Cochran and Bo Diddley among their ranks – Gretsch guitars were capturing the first first true zeitgeist of pop music.

By the middle of the 50s the Gretsch guitar line had expanded to include iconic designs such as the 6120 Nashville, White Falcon, Country Club, and the Duo Jet. The Duo Jet in particular provided a unique sound via a chambered solid body design.

Then, just as Gretsch’s star seemed to be on the wane in the face of Fender’s space-age electric designs, a rock ‘n’ roll obsessive named George Harrison brought Gretsch roaring back into relevance as he used various models in the early days of The Beatles, most notably a Chet Atkins on the iconic Ed Sullivan Show performance. 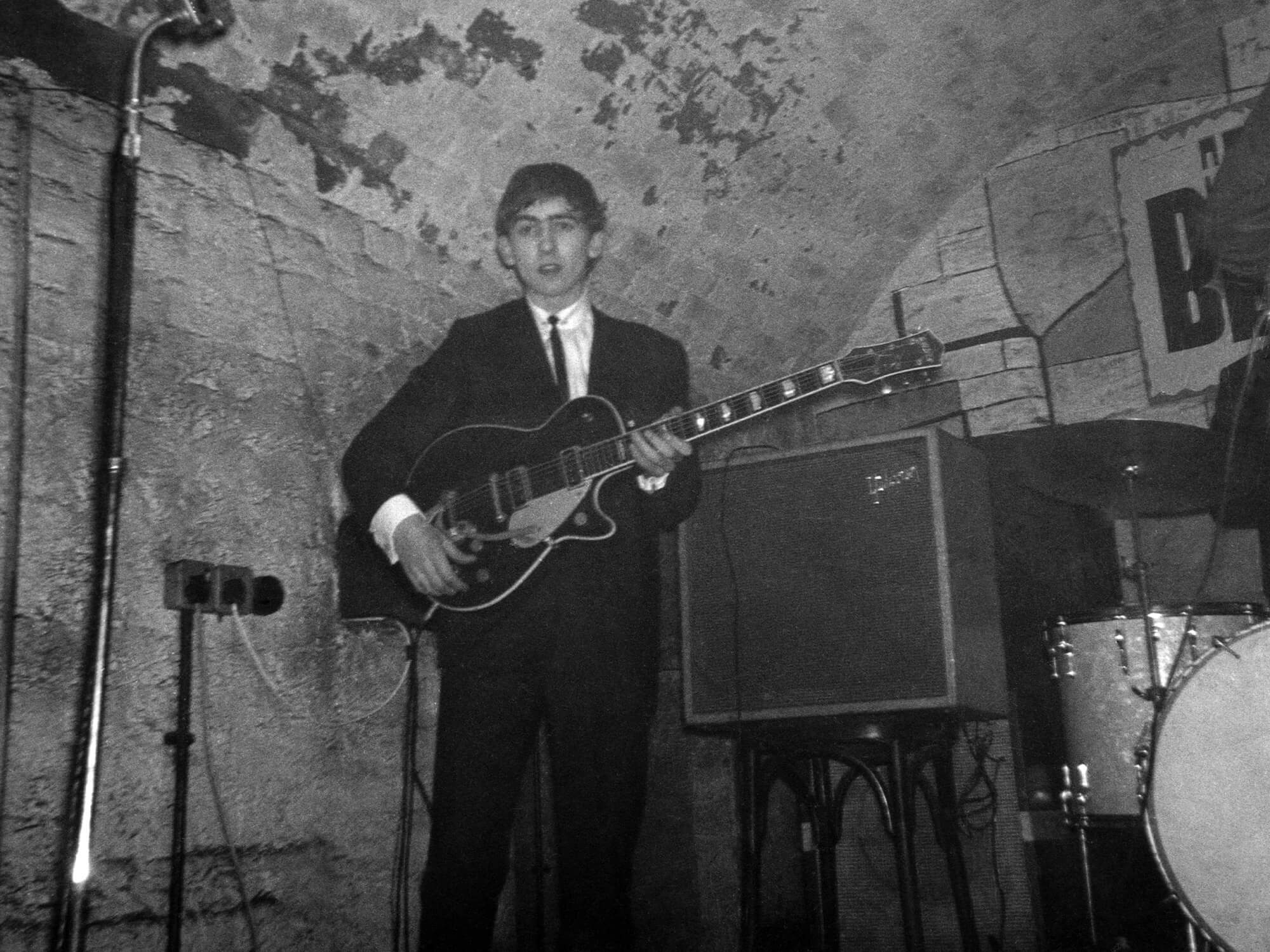 Fred would retire before the 60s was done and in 1967 the company was sold to Baldwin Manufacturing – producer of fine pianos among other instruments – and two years later the company’s manufacturing would be relocated from NYC to Arkansas.

The Baldwin era would be a period of turmoil for the company – the Baldwin company never understood the desire for Gretsch to appeal to the rock ‘n’ roll audiences of the day, and as music got heavier throughout the 70s the brand struggled to remain relevant.

The 70s would also see labour upheaval and at least two factor fires, and in 1981 Baldwin shuttered production of Gretsch guitars altogether. Baldwin’s leveraged buyouts caught up with in 1983 and the company went bankrupt, a year later Baldwin’s CEO bought the music division and brought back Duke Kramer to run Gretsch.

Back in the family

But all the while, the Gretsch family were desperate to get back what they’d lost in 1967, and bring the brand back under family ownership. Key to this was Fred W Gretsch, son of the late Bill Gretsch, and his wife Dinah.

Fred had grown up delivering Gretsch instruments to New York music stores and later worked in the company’s engineering department, and along with Dinah had run their own successful music company in South Carolina.

In 1984, the couple bought the Gretsch brand back, with Fred and Dinah coming in as CEO and CFO respectively. They brought drum production back to South Carolina, and after 17 years Gretsch was on the up. In 1989 Gretsch would resume producing guitars with a new line based on its classic designs.

Fender and Gretsch had been rivals in the Golden Age of rock ‘n’ roll, with the company even causing Leo Fender to rename the Broadcaster the Telecaster because they felt it was too close to the successful Gretsch Broadkaster drum line. But by the turn of the Millennium, things had changed dramatically and in a way that nobody could have anticipated.

In 2002, Gretsch and Fender Musical Instruments Corp announced a strategic partnership that would change the shape of Gretsch once again in dramatic fashion. While Fred W Gretsch retained ownership over the Gretsch brand, and of the company’s drum-making arm, Fender would gain exclusive rights to develop, produce, market and distribute Gretsch guitars worldwide

For the last two decades, Gretsch has been a key part of Fender’s brand proposition, and it has expanded dramatically in scope, making instruments at all price points both in the USA with the hugely respected Gretsch Custom Shop and in Japan and elsewhere in Asia.

The Gretsch of 2022 is a very different beast to the brand that started out making drums and banjos in New York in 1883, but the fact that after all the turmoil and upheaval of the last 139 years it remains at its core a family business is all the more remarkable.