Fuzz Was The Future: Now but not yet

In the latest instalment of his exploration of the history of fuzz, Josh Scott takes us through the troubled early years of the first effects pedal, and asks, “How could they have gotten something so right, so very wrong?”

Over the last few months, we’ve ploughed through the history of the guitar, and it’s been a wild ride. We’ve jammed with cavemen in 500BC, gone kite-flying with Benjamin Franklin and on a cross-country road trip with Mark Twain, and you even joined me in a sound-proof anechoic chamber in Japan. Most recently we stood alongside studio engineer Glenn Snoddy while he made the history-changing decision to leave in the fuzz on a country western hit in 1961. It’s all led to this.

Now, I know that I promised last time that I’d wrap this up in the next article, and in my defence, I 100 per cent intended to. That said, this home stretch is just too important to squeeze into one column. It needs two, and since this is a monthly column, let’s make the most of it.

If you haven’t been following my tour through guitar’s unlikely sonic evolution so far, I’d suggest you head to Guitar.com and brush up on the first three articles in this series before continuing. It won’t take long, and these last two sections are going to make a lot more sense if you do.

At this point in the narrative, I feel like a cross between Doctor Who and Bill S Preston Esquire (coincidentally, both time-travelled in phone booths). We’ve gone on a most excellent adventure through guitar’s sonic history, a journey that started in 500BC and is still underway in 2021, and I’ve had the pleasure of being your tour guide through the whole thing. This, of course, brings up a very logical question: why don’t I have a time-traveling phone booth? If anyone can be trusted with such a powerful device for the exploration of guitar history, it’s me, right? But no: I’m sitting here, typing on my stone-age laptop computer, stuck in the present, not teaching founding father Benjamin Franklin how to play Free Bird on a fifties Strat. Sometimes, life’s not fair. Okay, enough of that – let’s get back in our metaphorical phone booth and head back to the not-yet swinging sixties…

Full disclosure: this first section is a bit of a downer. We already discussed how Gibson’s initial efforts to market the fuzz pedal were a disaster, but it’s equally important to understand why it failed. For that reason – and to try and keep the mood up over the next few paragraphs – I’m bringing in my good friend Thomas A Edison to give us a pep talk. Edison was, of course, a genius inventor whose greatest creation, the lightbulb, has become the literal symbol for a great idea. But it wasn’t always smooth sailing; he tried and failed more than two thousand times to invent a working lightbulb before he nailed it. When critics brought this up, Edison responded, “I didn’t fail. I just found 2,000 ways not to make a lightbulb; I only needed to find one way to make it work.” With that in mind, you could say that Gibson spent the first three years of the Maestro Fuzz-Tone’s life (roughly 1962 through 1965) finding 2,000 ways not to sell a fuzz pedal.

If you look at the marketing material from the time, it’s not surprising that their advertisement campaign totally tanked. How were they supposed to sell a product that no one remotely understood, that no one thought that they needed, and that the majority of musicians were probably scared to even use? It was a product nightmare, and I’d argue that even Don Draper would have passed on pitching the Fuzz-Tone in 1962.

True, people absolutely loved Marty Robbins’ Don’t Worry and the glorious studio accident that gave birth to the song’s fuzzed out solo, but could Gibson successfully build an entire advertisement campaign off of that? Short answer: nope.

I like to call the period between 1962 and 1965 the “now, but not yet,” and that phrase wraps up this moment in history pretty well. It was a strange time when western popular music was (metaphorically) on the edge of a cliff, but no one could decide whether or not it was the right time to jump off. Revolutionary gear like the Fuzz-Tone almost fit into the cultural landscape of the early sixties, but not quite.

In the late 1950s, a new generation of American teenagers had done what teenagers do best – utterly rejected their parents. These teens wanted to trade in the popular, capitalist, Cold War-infused, paranoia-fuelled lifestyle in favour of something more authentic. Some turned to folk music as the ultimate homespun alternative, but other teens hungered for something even further removed from their parents’ ideals. Something downright rebellious. Thus, rock ’n’ roll began transitioning into rock (if you’re not sure what the difference between the two genres is, try listening to Johnny B. Goode and Sunshine Of Your Love back to back).

It’s no coincidence that the FZ-1 launched the same year that Capitol Records dropped Les Paul as a recording artist. By this point, the characteristically polished vocals and exquisite guitar technique of the fifties were officially out of fashion, and this new audience wanted something dirty, gritty and even a little offensive. But the outright offensive nature of this new rock music actually has its roots in songs that, circa 2021, we would call totally harmless. 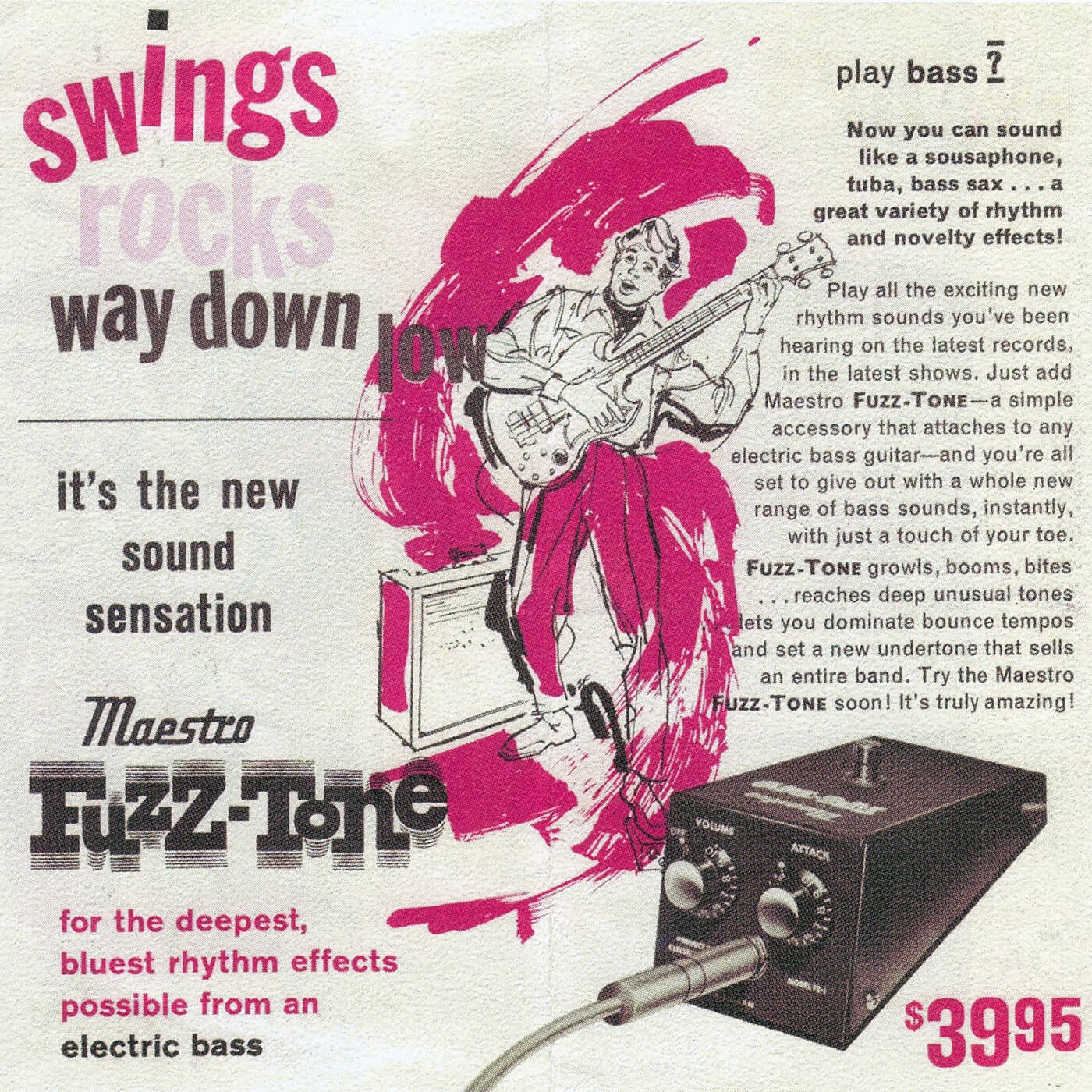 Case in point: Rock Around the Clock by Bill Haley and the Comets is remembered nowadays as an innocent teeny-bopper jingle, but when it peaked in 1955, this song literally incited riots. Rock Around the Clock was featured in the hit film Blackboard Jungle, and it riled up teenagers so much at screenings that they danced in the aisles, ripped up theater seats, got into fights and generally trashed whatever venue they happened to be in. As far as parents were concerned, this just proved that rock ’n’ roll was “the devil’s music.”

At this point, American parents did what parents do best: completely overreacted out of concern for their kids. I’m not just talking about throwing a few records in the trash. When Elvis Presley released Heartbreak Hotel in 1956, overzealous parents literally burned him in effigy in St. Louis. I’m not sure even Alice Cooper or Ozzy Osbourne has that claim to fame. According to historian Ronald L Davis, psychiatrists at the time called rock ‘n’ roll a “communicable disease” and pronounced it “a cannibalistic and tribalistic” form of music.

To be clear, the “cannibalistic and tribalistic” music they’re referring to here are edgy songs like 1952’s I Saw Mommy Kissing Santa Claus, 1958’s Splish Splash (“I was taking a bath”), 1962’s Puff The Magic Dragon and 1963’s Louie Louie, all which were banned from the radio for fear that they would corrupt the American youth. More than anything, these responses show that people just weren’t ready for the angst of fuzzed out electric guitars.

The FZ-1 launched in 1962, the same year that Jimi Hendrix was discharged from the US army and the Beatles recorded Love Me Do. Within a year, the Rolling Stones’ Come On and the Beach Boys’ Surfin’ USA would rocket to the top of the charts, and within two years Pete Townsend would smash his guitar onstage for the first time at a London concert.

The rock ’n’ roll of the 1950s had evolved into an unstoppable force and reached boiling point; politics, technology and culture were pressing in on all sides, and guitar effects like fuzz and distortion would help subversive rockers like the Rolling Stones, the Kinks and The Who embrace this entirely new era of music.

The FZ-1 was actually the perfect piece of gear to do that. The problem was, when Gibson released it in 1962, no one seemed to care. With a few thousand FZ-1s sitting on retail shelves across the country, the potential didn’t match its reality. This was partly due to what I call development delay, and it goes a long way in explaining why people didn’t understand the FZ-1 when it was first released. We see development delay in the first car, the first MP3 player and the first internet service. The product that comes first is guaranteed the uphill battle of explaining itself while the later Ford Mustang, Apple iPod and fibreoptic internet have nothing to explain; they are simply the progression of an established technology. Every technology has this factor; if you do a little digging on your favourite product, you can find out which inventions led to its existence. The Fuzz-Tone may have been the first, but like most firsts, it was by no means the best.

The most revealing proof of the Maestro Fuzz-Tone’s failure to launch can be found in its first marketing campaign. This is an important moment in the timeline of guitar. The FZ-1 was not only the first guitar pedal, it also produced the first ever pedal demo, in the form of a vinyl record that was shipped to dealers across the US. Like any good demo, it endeavoured to explain what exactly the FZ-1 was supposed to do.

I’ve listened to this demo dozens of times and, every time, I share the confusion that any guitarist, or music shop salesman, would have felt concerning the FZ-1 in 1962.

The narrator can’t seem to make up his mind about what exactly the FZ-1 is supposed to be used for as he gushes, “It’s mellow! It’s raucous! It’s tender! It’s raw! It’s the Maestro Fuzz-Tone.”

In a frantic transatlantic accent, the narrator tells listeners that they can make their guitars sound like organ-like tones, mellow woodwinds and whispering reeds, booming brass and bell-clear horns and that they can also utilize it with their amplifier’s effects like reverberation, tremolo and vibrato. The specific “fuzz” sound that rocketed Marty Robbins to the top of the charts is at least demonstrated in a Don’t Worry-esque track within the record, but the guitarist doesn’t quite deliver the same tone as Grady Martin.

Gibson had brought out a product that did one revolutionary thing – but they lacked the confidence to just say that, and instead gilded the lily with reed, brass and organ-like-tones.

Even getting the pedal into the hands of the greatest musicians of all time didn’t help – pictures of the Beatles circa 1963 show the FZ-1 on the floor at Abbey Road Studio 2 during the recording session for She Loves You, then it is seen again later that year while they recorded Don’t Bother Me. But the fuzz effect isn’t heard on either of these records. The Beatles saw the potential in this new sound, clearly, but fuzz didn’t actually make it into one of their final recordings until 1965’s Think For Yourself.

Between 1962 and 1965 the Fuzz-Tone, and fuzz itself, was set to be filed alongside the thousands of other failed musical innovations. But then came a young man from Dartford who wanted to record a horn part that had come to him in a dream. And the rest, as they say, was history.

Tune in next month for the actual, real, we’re-not-kidding last article in this mini-series: Satisfaction Guaranteed. Coincidentally, if you want to do a deeper dive on the FZ-1’s terrible pedal demo, you can watch my YouTube video ‘The First Pedal Demo Ever Made’.