It’s one of the most distinctive signature models of all time, but how did the KISS Demon come up with his trusty four-string? We asked the man himself.

What is a guitar but a collection of wood, magnets and metals? The body and hardware can be shaped in any number of ways. But at the end of the day a guitar is just a tool to create art. Just as musicians arrange 12 notes to create songs, guitar designs often take the form of artistic expression when shaped in new and interesting ways. Sometimes the paintbrush can be just as beautiful as the art it inspires and creates. This is the story behind the iconic Axe Bass which has been wielded by Gene Simmons for decades. Plenty of articles can tell you what the Axe is, the wood and the metal – the specs, but to get the real insight on what this legendary instrument means you have to go to the source, the man who’s been playing it all these years, Mr Gene Simmons himself.

So what is the Axe Bass, then? Well, in simple terms it’s a neck-through construction instrument with a hard maple neck and mahogany ‘axe blade’ body. Various production versions of the instrument often feature pickup configurations and tone controls that offer a wider tonal palate, but Gene doesn’t want anything getting in the way, and so his personal versions feature just a volume control. Under the hood, in the 70s and 80s the Axe featured a boost, but the current models feature only EMG pickups and a preamp.

The inception of the Axe Bass came from the adage of referring to a guitar as an “axe”. Ever the savvy businessman, Simmons ended up trademarking the term “Axe” as it refers to a musical instrument, as well as the shape of the bass. As Simmons explains, “…because I owned the name and the design, it qualifies as an invention in the library of congress. My bass is the only musical instrument that is an ‘invention’.” 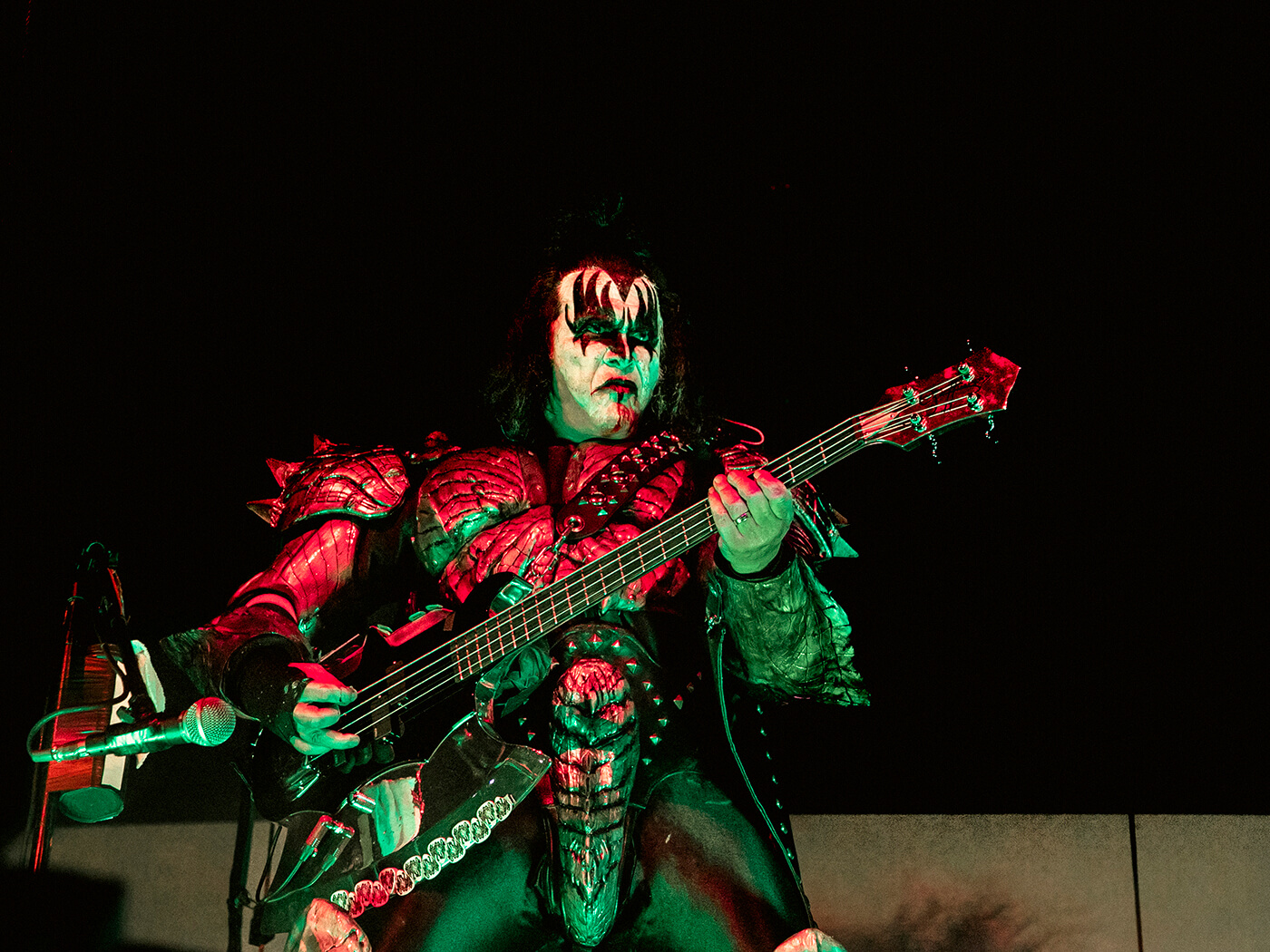 Jokes abound about the level of KISS merchandise available, but the reality is that Simmons was ahead of his time in terms of understanding how to monetise and control his image and legacy, and trademark ownership has played a big part of that. Oftentimes we find that ownership of an idea is just as important as the idea itself. As Simmons explains, “I started out playing Ampeg SVTs and for a while we were going to do a line of SVT amps and they were originally going to be called The Punisher, and I was able to beat Marvel to the trademark for the name Punisher, even though they had a character named The Punisher. I beat DC in using The Demon – they tried to stop me, but I was able to prove that my Demon was far more famous than their Demon character!”

By trademarking the name and shape of the Axe, Simmons’ was able to control who builds the instrument for him, and sure enough he’s switched builders many times over the years. Gene tapped Valdez Guitars to build the first one, then Steve Carr built a few, as did Kramer, Jackson, and Cort. In the case of Kramer, Jackson and Cort, as soon as quality started to dip, a new builder would be found. As Simmons explained, “[Cort] started mass producing them and selling them for a cheaper price, obviously, so the wood was cheaper – everything was cheaper, and the paint started to crack. So I ended that relationship and continued to make them on my own.”

These days the basses are available through his own website [GeneSimmonsAxe.com] and every Axe Bass is built by hand, and is personally inspected by Simmons before being shipped to the customer. All of the basses are built at a shop in South Korea [although there are some specialty one-off builds done in the USA by master builder, Jim Cara]. 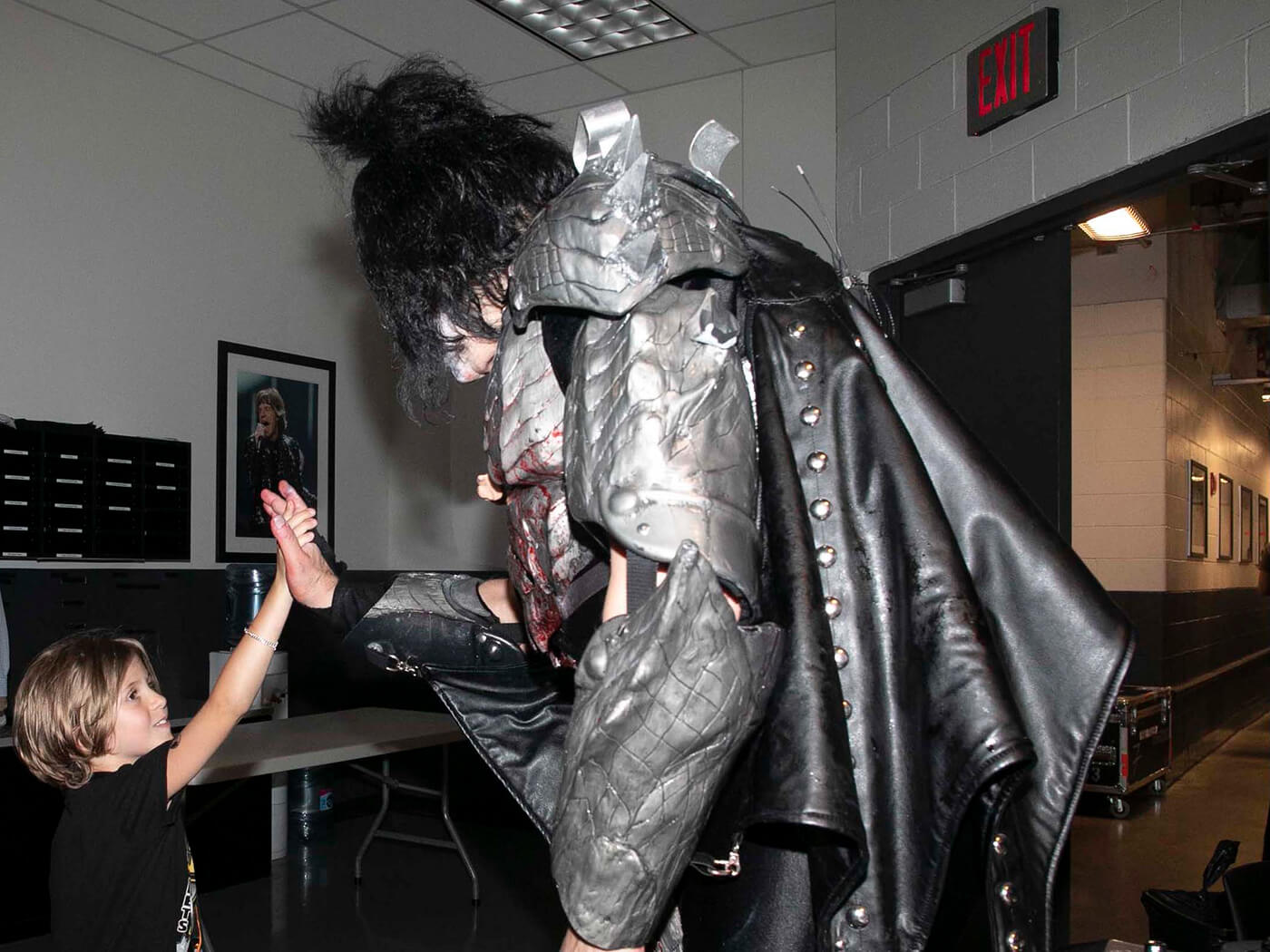 Perks of the job

While the price tag for the Axe basses might be high, they are often sold as a package deal with other perks. The basses are often signed or played on stage – depending on what price point the buyer wants to reach for. There are masterclasses taught by Simmons himself that are only available to Axe buyers. Simmons estimates he’s sold about 10,000 instruments over the past 10 years. But did he ever imagine such a strange instrument would become as successful as it has?

“Everything starts with me,” he explains. “I do stuff because I get excited about it and then I hope that other people will get excited about it as well. For me it was also pragmatism, because I already owned the word ‘Axe’ as it relates to musical instruments, so I hand-designed it, and I still have the original artwork and it looks very much like the Axe that’s available today. I drew what the Axe might be. 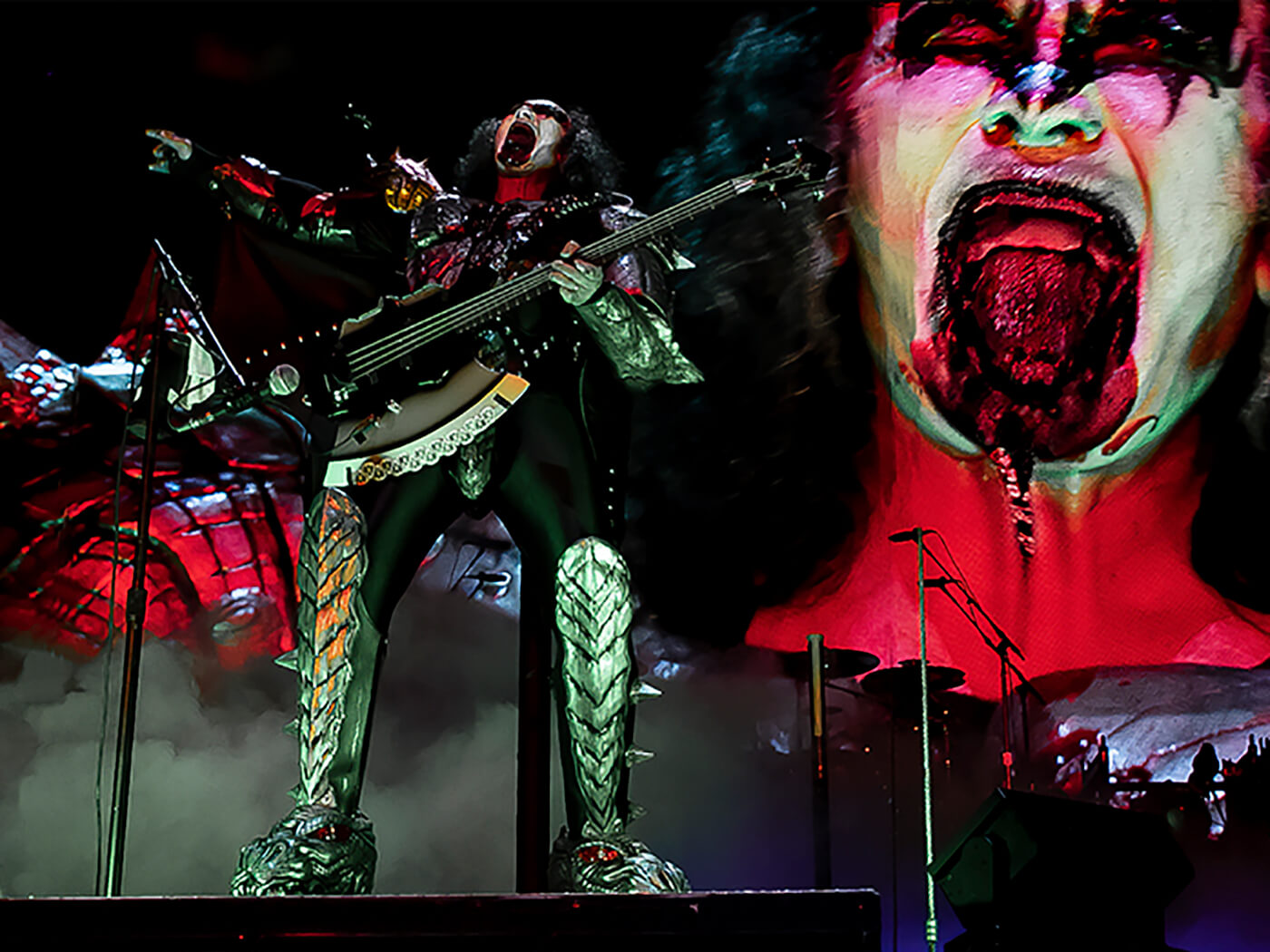 I didn’t know anything else about it – the wood, the relationship of the bridge to the neck, I didn’t think about any of that. So I started out with the visuals, because when somebody walks in, that the first thing that hits them. It looked cool on a piece of paper so I thought it would look cool as a bass.”

The Axe has become such an integral part to not only KISS, and Gene’s Demon character, but Gene Simmons himself. The imposing imagery the Axe inspires would lead many to believe that it is purely a stage instrument, but it was used extensively in the studio through the years as the tonal properties were always a priority. Which is why, in addition to some of the cosmetic alterations the Axe has gone through over the years, we often see them with different pickups and hardware as well, as Simmons explained, “A pickup is subject to the wood and the body shape. So I kept moving the pickups around and adding a boost on the back, just to make sure that the bass had the sound I wanted.”

Simmons notes a distinction between bass designs that work well in the studio compared to on stage, “Sometimes in the studio, because of the different acoustics and dynamics, I would use basses that I have never used on stage, because live, they don’t sound good. The Fender Jazz basses I’ve used on some songs, but live, they’re too boomy. They don’t have the attack you need in arenas.” 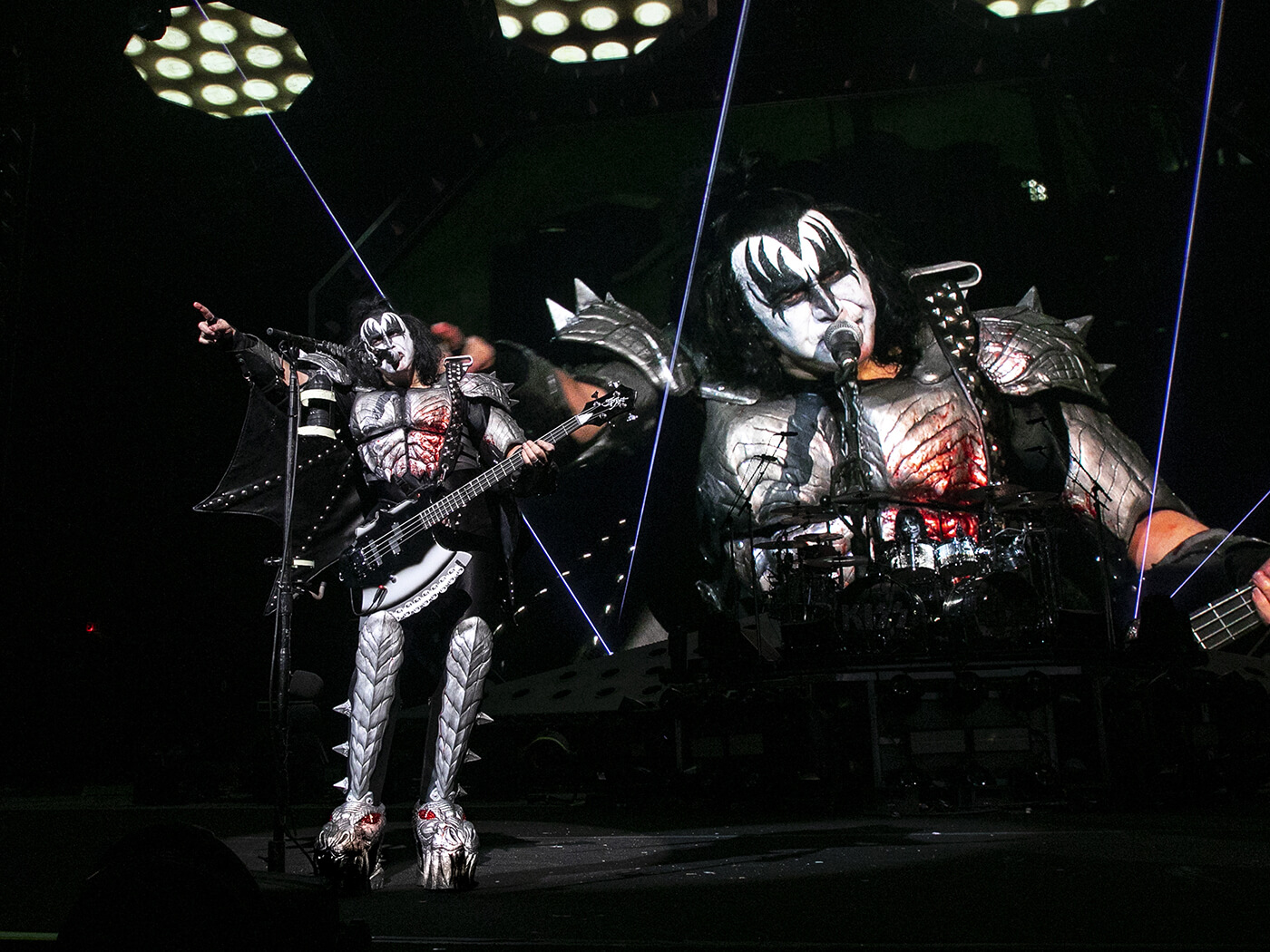 Sell out with me

Simmons isn’t a nostalgic type of guy when it comes to his instruments, even the vintage ones and the prototypes, “I don’t have that sort of ‘I have to keep this one because it’s my first’ mentality. I still have 50 or so that are from the 70s but they’re available for sale.” To those who might call Simmons a sellout, Simmons has a message, “Damn right, bitch. I sell out every night.”

Just as different paintbrushes might inspire us to paint differently, the Axe is a very different instrument and commands a different vibe when it is played. As Simmons explains, “Well, you can’t avoid feeling badass… It’s not the first instrument I think of when I want to play Yesterday by The Beatles…” 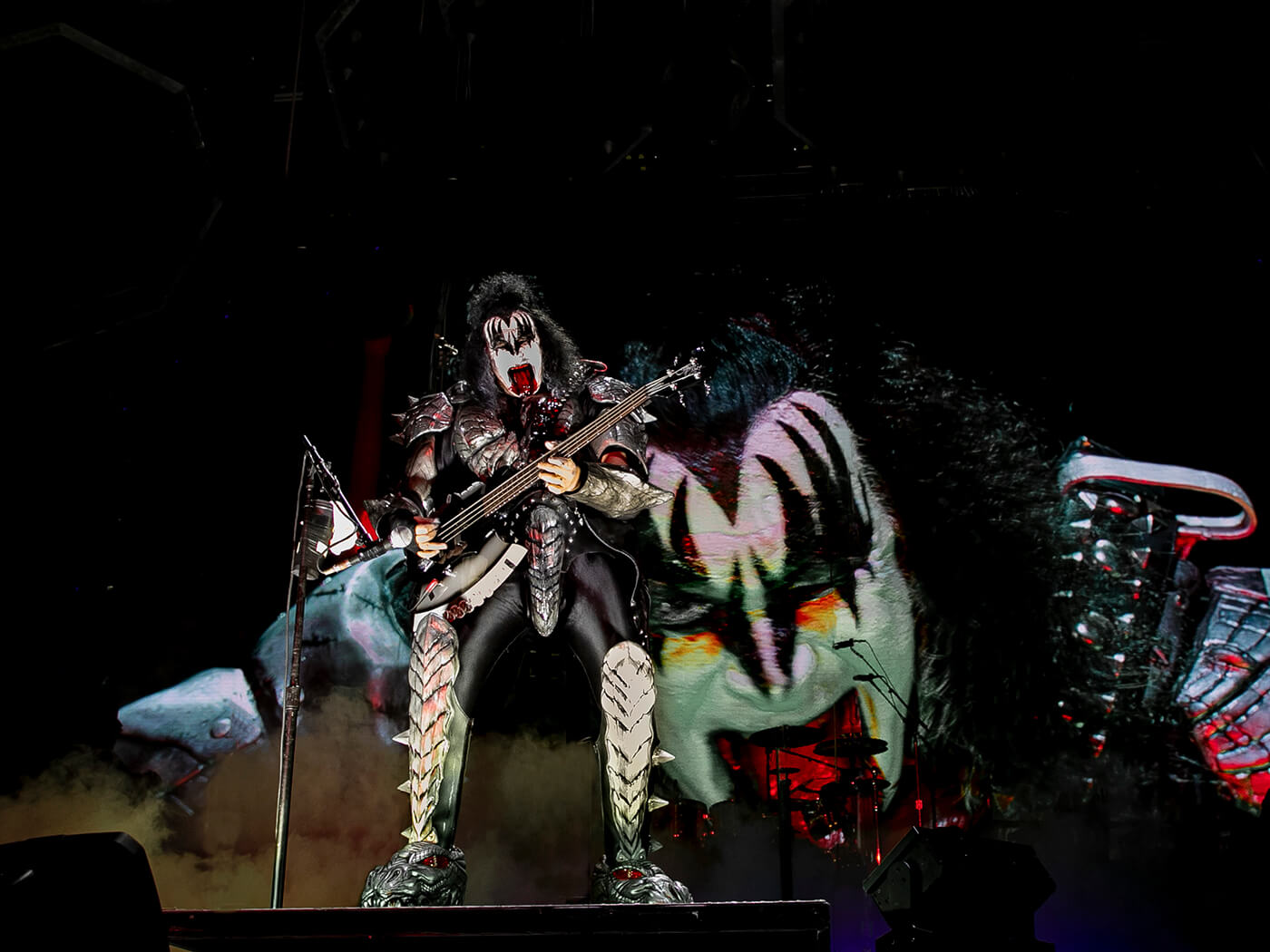 The Axe is one of the most recognisable and distinctive signature instruments ever, but you won’t get Simmons wasting time worrying about the enduring legacy of his favourite bass.

“You know, I don’t think in those terms,” he explains. “I have a very large ego, don’t wonder about that! I’m clear about that. It’s difficult for me to walk past a mirror without stopping to say, ‘yo, what’s up?’. But as far as what it’s going to mean after I’m gone, oh my god, who cares? There are people that want to leave a legacy and are concerned with what is said about them after they’re gone. I don’t care, it doesn’t mean anything to me.”

Find out more about the Axe Bass at www.genesimmonsaxe.com.