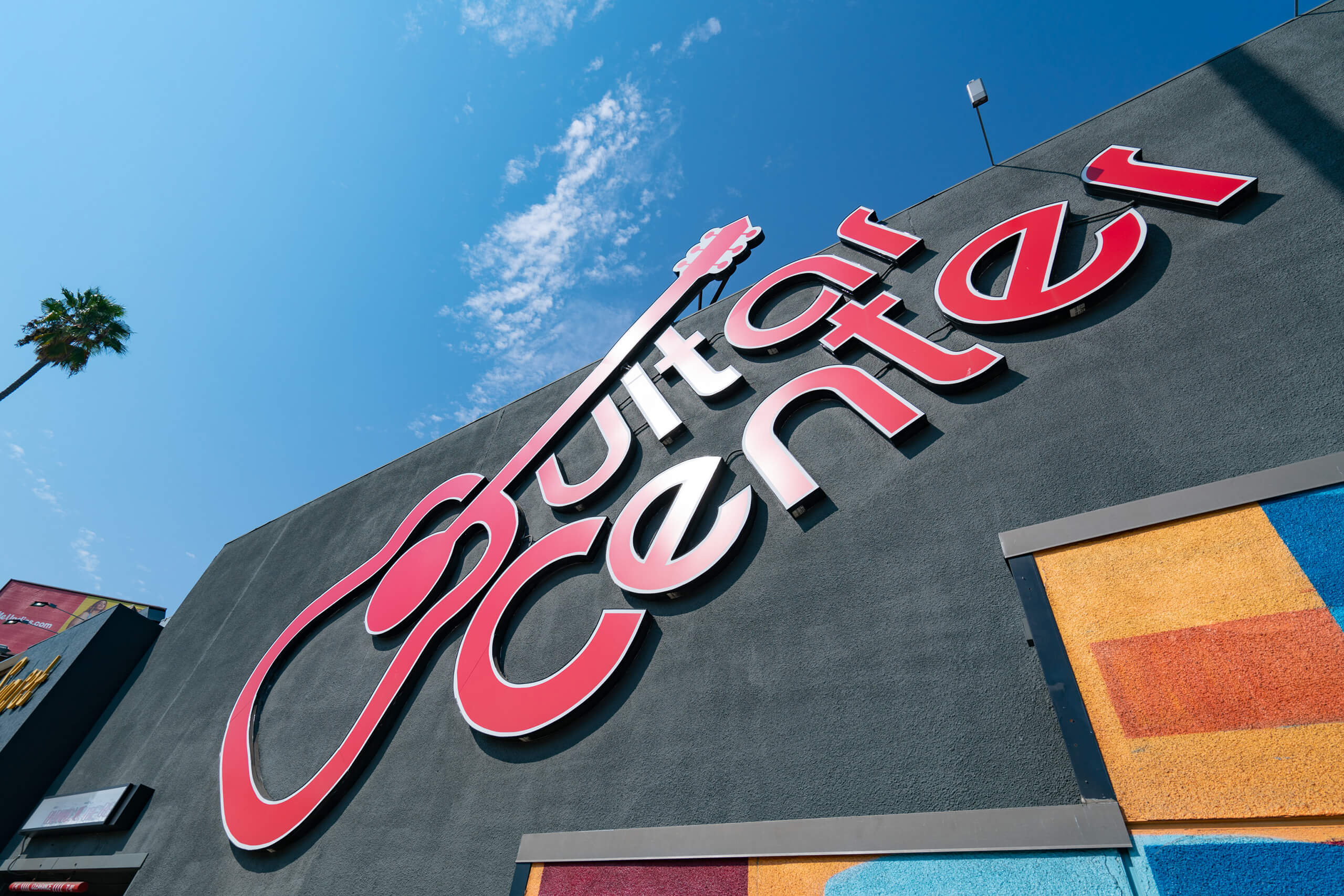 Could Guitar Center actually go bankrupt and be forced to shutter?

Time is running out for the US retail giant.

The 15th of November may not be marked on your calendar as anything special, but if you’re a guitar player in the US (and potentially in other countries too, as we shall see), it might be a good day to watch the news, because 15 November is when the giant Guitar Center chain could finally collapse into bankruptcy.

Guitar Center‘s date with destiny has been a long time coming. Once the much-loved Hollywood guitar shop that was the place you went knowing you would find the hottest brands, the best products and great service, the 1959-born retailer started out selling organs, then reincarnated itself as The Vox Shop (as the mid-60s British invasion brought Vox amps with it) eventually becoming The Guitar Center in the late 1960s. So far so good. And during the 1970s and 80s, times were very good indeed with the store opening multiple branches across the US, eventually becoming a public company in 1997.

Despite COVID-19, sales at GC have apparently held up quite well this year

Already by then, it may not have been quite so loved by guitarists as it had once been. The nature of a large retailer being what it is, some felt the personality and style had begun to fade, but in the eyes of the business fraternity, Guitar Center was on a roll. Such a roll that in 2008 it attracted the attention of the financial behemoth Bain Capital, one of the US’s largest investment companies.

Bain liked what it saw and purchased the company for an estimated $2.1 billion, including debt. And it’s debt that has haunted the chain ever since and which now threatens its very existence. In the financial world, they call that sort of debt ‘leverage’ and GC was suddenly leveraged to an astronomical degree.

What follows is a greatly simplified version of how this sort of deal works. In essence, Bain bought Guitar Center then handed the bill for its purchase onto the company. That may sound strange to a layman but that’s how a lot of big businesses work and, as long as times are good, it makes a sort of sense.

The purchased company carries on being successful and making profits, which can be used to pay back the interest on the debt and maybe a little of the overall borrowing too, while still expanding and, more or less, keeping everyone happy. With luck and good management, the value of the company should even increase, so if the new owner feels like selling it on in a few years time, it could get back more than the price it paid.

However, as the Scottish bard Robert Burns reminded us: “The best-laid schemes of mice and men go oft awry”, and what Bain couldn’t have foreseen (but really should have considered as a possibility) was the 2008 financial crisis, which didn’t so much dent Guitar Center’s business as punch a hole straight through it.

Suddenly, paying the interest on such a huge debt became a big, big problem.

Cue frantic management efforts to put things right, including staff cutbacks, which inevitably meant less skilled and attentive service for its customers and increasing pressure on its suppliers in the search for bigger profits. It also tried to catch the wave of online selling by merging online retailer Musician’s Friend into the operation but did so less than successfully – which was unfortunate given how one of the biggest challenges to Guitar Center’s existence today comes from highly successful online competitors like Sweetwater, Thomann and, of course, Amazon.

The corporate shenanigans undertaken in an attempt to turn Guitar Center around didn’t only involve policies that upset and demoralised shop floor staff, suppliers and customers; the company also went through successive senior management changes. Bain’s supposed magic touch with skilled management didn’t seem to be working too well.

By 2013, Guitar Center was in such trouble that Ares Management (another ‘alternative investment manager’, which owned a large chunk of the company’s debt) was able to take control, relegating Bain to a relatively minor role. In theory, this was good news as it reduced Guitar Center’s debt to a more manageable level. But not everyone was convinced. The eagle-eyed observers at the credit rating agency Moody’s didn’t help the atmosphere by constantly downgrading its estimation of the ailing retailer’s potential.

Then, in May this year, having missed a $45 million interest payment, still saddled with an estimated $1.4 billion debt mountain and facing fast approaching ‘secured notes’ (in other words, promises to pay loans by a set date) GC agreed a ‘distressed debt exchange’ taking on almost $33 million of new debt to pay off some of the old.

Meanwhile, GC’s suppliers looked on, uneasily, needing to keep selling to the nearly 300-strong chain, but worried that if things went from bad to worse, they would be left not so much with the euphemistic ‘haircut’ businesses like to talk about, but scalping, if not actual decapitation.

If all this sounds like a heavy session in The Last Chance Saloon, things may not be quite that bad. Despite COVID-19 and the impact it has had on traditional retail businesses, sales at GC have apparently held up quite well this year. Forced to stay at home, many people seem to have decided now is the ideal time to learn to play, so guitar sales have actually been respectable, as Fender and others have reported.

Moreover, before the pandemic, even the sceptical Moody’s had recognised that, fundamentally, GC is a viable retail business: its stores, for the most part, are selling well and paying their way. Industry observers privately opine that it needs trimming back here and there, and that it is going to have to come up with a more effective way of combating the growth of online competitors. But despite that, it still generates profits which would be quite reasonable were it not for the huge debt it has carried since the 2008 buyout.

Which brings us to the present crisis and another missed interest payment, leading to speculation that the company will file for Chapter 11 bankruptcy protection on 15 November.

Most industry insiders (none of whom will speak on the record, for all too obvious reasons) believe Guitar Center will emerge out of its Chapter 11 cocoon much like some of the banks post-2008: on a similar ‘it’s too big to be allowed to fail’ principle, relatively unharmed. The financial wizards will wave their wands, debts will be exchanged, promises made and the company will stagger on. Individual stores may have to close and the corporate belt will have to be tightened, but GC will survive in a recognisable form.

Suppliers, almost inevitably, will be expected to contribute, and will do so if only because it will be better for them to lose a huge chunk of money than forever lose a customer with almost 300 shops. Property owners of the leased stores will almost certainly suffer too, being faced with attempts to renegotiate leases.

And there will be further impacts on the already depleted staffing levels, which is unlikely to impress customers who already – and sometimes vociferously on internet forums – complain about GC’s service levels. This sort of chaos is never good for employee morale, after all.

There is, however, an alternative strain of thought in the industry – albeit a minority view. Some believe that events of the last year have changed the world so much that GC just might, just possibly, be allowed to close, or at least be forced to restructure in such a way as to become a very different business.

Many manufacturers, they claim, do not much like dealing with GC. They get asked for special discounts and privileged ‘incentives’, which cost them money. They are expected to produce products exclusively for the company, which risks alienating their other customers. Some say they even have to take their proposed new models to GC’s buyers before introducing them so that GC can say what it likes and what it doesn’t and demand changes accordingly.

Above all, they don’t like living on the edge of a metaphorical volcano, reasoning that however the cake is cut, sooner or later the pile of debt the company is carrying will mean it has to go – and that now might be the time to let it.

Is that a real possibility? Well, despite the suffering brought about by the pandemic, some musical instrument businesses have done well since last spring, not so much despite COVID-19 but actually because of it.

Guitar makers at the top end of the market, especially, have seen customers around the world suddenly (if only temporarily) free of commuting costs, with expensive holiday plans forcibly abandoned, finding themselves with spare furlough money and able to buy that luxury guitar or bass they’ve always wanted. And they have been doing just that, in such numbers that some manufacturers haven’t been able to meet demand, not least because production has also been hit by COVID-19 restrictions.

Further down the scale, the influx of learners has seen entry-level sales soaring, as well. COVID may have more or less wiped out sales of the bigger backline amplifiers (notably bass amps), PA equipment and acoustic drums, but effects pedals, guitars, keyboards and home recording equipment have all been selling well. While there is never a good time to take the hit of a major customer going down, now, the prophets of doom say, while suppliers are doing comparatively well, could be a better time than most.

If that were to happen there could be some interesting consequences.

The highly respected Music Trades journal has estimated that an eye-watering $375 million is owed to suppliers, landlords and other trade creditors, so inevitably the first thing that would happen would be a major sale.

Sooner or later, some financial genius is going to have to work out how to vanish that $1.4 billion debt that hangs over GC

Next could be the loss of some smaller instrument and equipment makers, unable to survive the hit. The big names in the industry would almost certainly survive, though even the biggest would be wounded, which could result in reduced model development, R&D and marketing budgets at the least. This would make a collapse an international event, as the brands impacted wouldn’t just suffer in the US and the victims would not be restricted to US-owned companies.

In the short term, smaller independent guitar shops might benefit from customers returning to their stores, but inevitably some business overall would be lost. The money would just be spent on things other than musical instruments. The big winners, as you might expect, would be the online stores.

It can’t be stressed enough that most observers expect Chapter 11 to be filed and that somehow Guitar Center will appear out the other side, still burdened with a huge amount of debt but having dodged the executioner’s axe yet again. How many more times it will manage that, assuming it does, is anyone’s guess. But sooner or later, some financial genius is going to have to work out how to vanish that $1.4 billion debt that hangs over it like a sword.