Guitar Recording FAQ: How to record an acoustic guitar with only one microphone

You can get great acoustic guitar sounds with just one microphone by using mic placement and the room to your advantage. 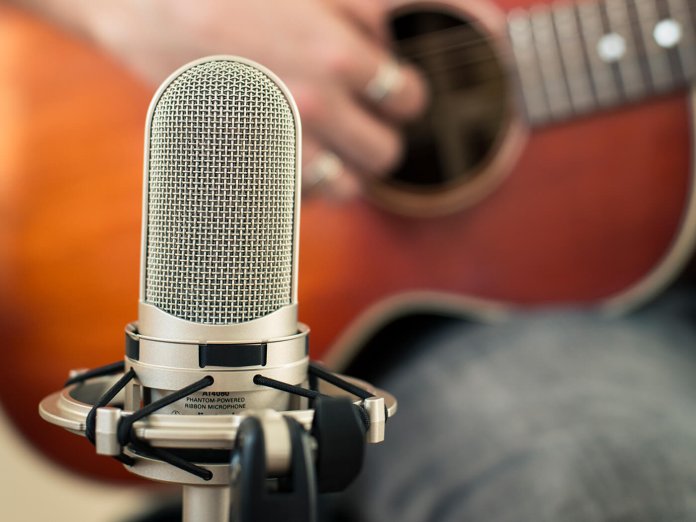 How do I record my acoustic guitar with only one microphone?

Hi Chuck. When you distil things right down, acoustic guitars are essentially mechanically driven loudspeakers. Instead of a paper cone driven electronically by a voice coil, there’s a sheet of timber called the soundboard, which is put into motion by string vibration.

Just as you can fine tune electric guitar tone by aiming a microphone towards different areas of a speaker cone, the recorded tone of an acoustic guitar depends on the area of the body that the microphone targets and the type of microphone being used. We’ll return to those topics shortly, but there’s another crucial factor that needs to be addressed first.

Forum discussions on acoustic guitar recording typically focus on microphones, equalisation and compression but acoustic environments are rarely addressed. When attempting to record an acoustic guitar, the first thing you need to decide is where you want to do it.

Try playing your guitar in your bathroom, kitchen and living room and you’re bound to hear the difference. A bathroom with a tiled floor and walls is likely to sound brighter and more reverberant than a carpeted living room with curtains and soft furnishings. A kitchen might sound somewhere in between.

Decide which room sounds best to you and consider recording in there. If you’re recording a solo acoustic piece, a livelier room might produce the best results. But if you’re overdubbing acoustic in a band mix, you might be better off working in a drier environment and adding reverb later. Don’t be afraid to experiment.

We discussed microphone choice for acoustic guitar in a previous instalment of this column. Here, we’ll just say that, given the choice between recording an acoustic guitar directly using its onboard piezo pickup or a lowly moving coil microphone, we’d go with the microphone every time.

Placement can refer to the guitar as well as the microphone. Before plugging in that microphone, try moving around within your preferred room and find the spot that sounds best. Early reflections from hard surfaces can sometimes enhance an acoustic guitar sound, so try playing up close to glass doors or windows if that’s an option.

You can also balance the direct and reflected components of the sound by moving the microphone. If you want more roomy sound, move the mic away from the guitar and if you want the opposite, move it closer. Also experiment with pickup patterns if your microphone has that feature.

Legendary bluesman Robert Johnson famously played facing into a corner. It was suggested that he did so because he was shy, but Ry Cooder believes Johnson was probably exploiting an acoustic phenomenon called corner loading.

Playing with your guitar facing into a corner increases low frequencies and produces a type of natural compression that enhances detail. If you try this, try placing the microphone directly in front of the guitar or maybe over your left or right shoulder aimed downwards towards the soundhole. If the sound is too boomy, move out of the corner slightly, or do the opposite if you want a fuller tone.

An omnidirectional polar pattern has the flattest frequency response, and you’ll hear more of the room in the overall sound. Figure eight will remove some of the room ambience while cardioid should detect the least ambience of all. But figure eight and cardioid may sound boomy if the mic is too close to the guitar. If that’s the case, try moving the microphone away from the guitar, or activate bass roll-off if you’re keen to minimise room ambience.

With regard to microphone placement, there are no fixed rules because all guitars sound different and much depends on the tone you’re shooting for. If you’re recording somebody else’s playing, try getting in close with your ears and listen closely to the way the sound changes as you move from below the bridge, across the soundhole and then on towards the neck joint. If you’re recording by yourself, make separate recordings for each position and listen back to decide which you prefer.

Once you’ve figured out where you prefer the sound, use that as the starting position for the microphone. When you think about it, that’s pretty obvious and the same procedure works for all acoustic instruments. Just remember to explain what you’re doing to the musician before you start, or you might freak them out!

Placing a microphone slightly below the bridge and aiming upwards towards the soundhole should yield a full and deep tone, but you may notice some lack of detail and treble. Moving the mic in front of the neck joint and firing it across the body will provide more treble and detail, but the tone might not be as deep.

Placing a mic in front of the soundhole can give you a good frequency balance with strong midrange, but the tone can sometimes be a bit strident and you may pick up too much slap from the pick if the player is using one. Remember that much depends on the sonic character of the microphone, too. So, if it’s a bright sounding mic, try placing it where the guitar’s tone is less trebly. Or if the mic has inherent treble roll-off, like most moving coils, ribbons and some old school condensers, try targeting a brighter area of the guitar.

Using just one microphone means that your recordings will all be in mono. Recording in stereo is a lot of fun and there are various ways to do it. So, let us know if you would like to learn more and we can explore it in a future column.