From Jimi to Stevie, we examine the history of Fender’s iconic instrument across six legendary players and their axes. 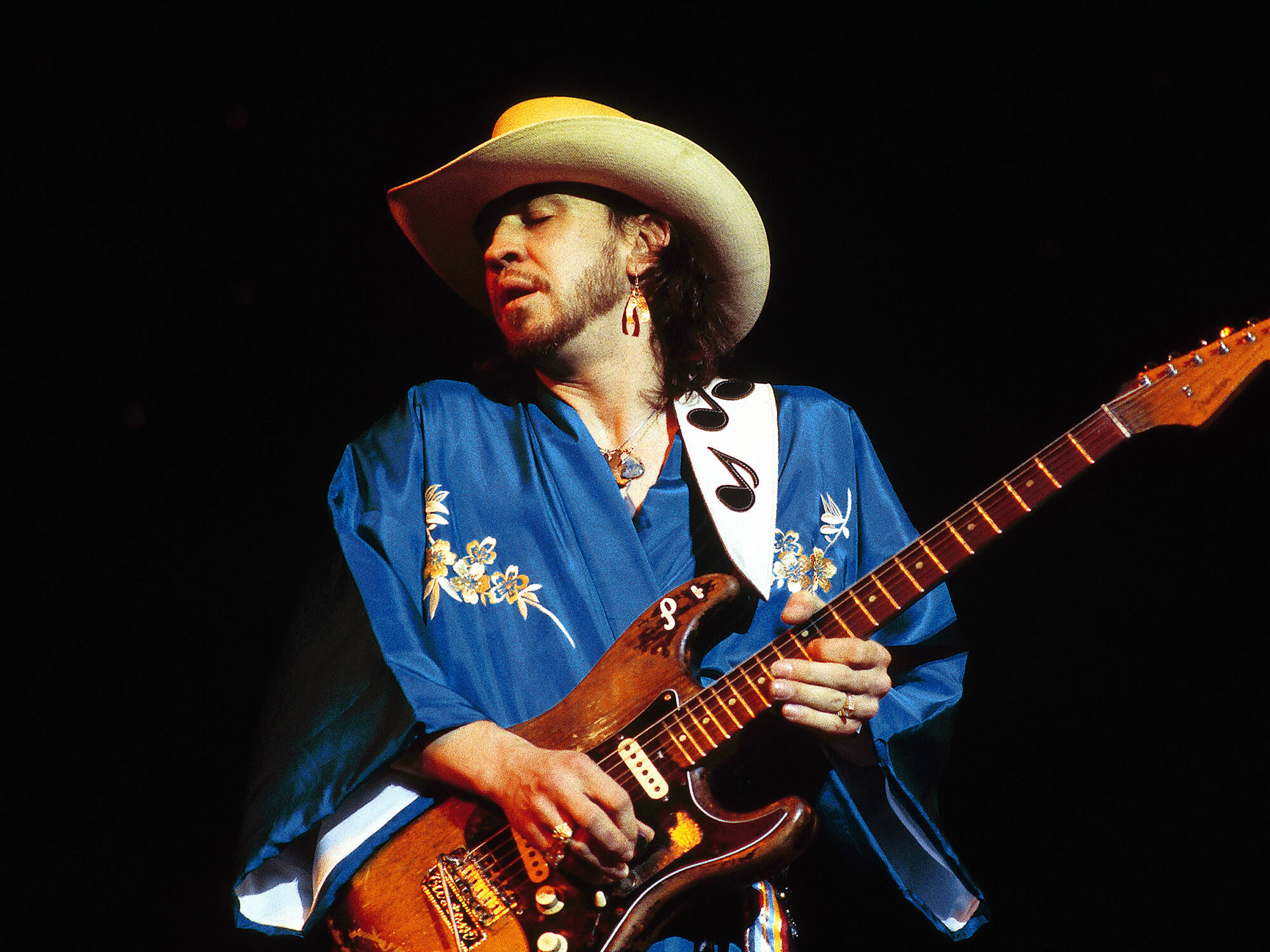 Fender introduced the Stratocaster in 1954. Since then the guitar has remained one of the most popular and influential instruments ever produced.

Artists from almost every genre have put a Stratocaster to use, often employing modifications that Fender would incorporate into future variants. The Strat is timeless. Here we explore a few of the Stratocasters that prove it.

Often referred to by Stevie Ray Vaughan as his “First Wife” and his “Number One”, in terms of tone this Strat is legendary.

Number One featured a left-handed bridge long thought to be a homage to SRV’s hero Jimi Hendrix, who generally played a right-handed guitar upside-down so that its stock vibrato arm hung over the bridge saddles.

However, Stevie’s tech has repeatedly disputed the claim that Number One’s lefty bridge was installed in honour of Hendrix. Instead, he said it happened to be the only one in stock at the time they needed one. What you believe is up to you.

Number One is made up of a 1962 body and a 1963 neck. It’s possible that this is how it left Fender’s factory, as necks and bodies were created separately and assembled at the end of the line. The pickups, however, were not stock, as they were dated back to 1959. SRV used and abused this guitar throughout his career and with it was able to squeeze out some of the most sought-after tones in guitar history.

Relic’d guitars are now a popular offering from Fender, and the vibe of many relic jobs are inspired in part by the heavy wear on Number One. The guitar’s fretboard had to be shaved and re-fretted about once a year. Stevie used Dunlop’s 6100 Jumbo fret wire.

Originally the neck had a 7.25-inch radius but, after years of abuse and maintenance, the neck now has a radius of 10 inches. The flatter radius presumably allowed for longer bends without the notes being choked by the curve of the neck. Stevie famously used .13 gauge strings and tuned the guitar half a step down for easier bending.

SRV used Number One on every Double Trouble record. The Strat was retired in 1990 following Vaughan’s death. Fender made several runs of replicas dating back to 1992. The original now resides with Stevie’s brother Jimmie Vaughan of the Fabulous Thunderbirds.

David Gilmour bought the Black Strat at Manny’s in New York in May 1970 after his first black Stratocaster was stolen. Its body was originally sunburst but had been painted black at Manny’s.

The Black Strat has undergone many changes over the years, all well documented in Phil Taylor’s 2008 book Pink Floyd: The Black Strat – A History of David Gilmour’s Black Fender Stratocaster. In fact, the only original parts left on the guitar are believed to be the bridge plate and pickup-selector switch. The necks were swapped out a few times. The volume and tone knobs are wired directly to the output jack to cut down on bad connections and it has a mini toggle for the neck/bridge combination.

The Black Strat appeared on many legendary Pink Floyd albums and songs until 1986, when it was replaced by a red Stratocaster. In 2019, the Black Strat set the record for the most expensive electric guitar ever sold, at $3,975,000. The current owner is Jim Irsay.

Blackie was Eric Clapton’s main squeeze from 1974 to 1985. The guitar was somewhat of a partscaster, beginning in 1970 when Clapton bought six 1950s Stratocasters in Nashville for $200 or $300 each. He gave one each to George Harrison, Pete Townshend, and Steve Winwood.

Clapton took the parts from the remaining three Strats, all from 1956 and 1957, and gave them to Nashville luthier Ted Newman Jones for assembly. The resulting guitar was dubbed ‘Blackie’.

Clapton relied on Blackie almost exclusively on stage and in the studio for a decade. It was used on the cover of Bob Marley’s I Shot the Sheriff, which remains Clapton’s only No.1 single.

Fender’s very first artist signature guitar, released in 1988, was modelled after Blackie. After ’88, Clapton started playing the signature model instead. However, Clapton’s signature was yet to appear on the headstock.

Yngwie Malmsteen was the first to actually have his signature appear on the headstock of a signature Stratocaster model. Clapton’s signatures only started appearing after Yngwie got his.

In 2004, Blackie sold at an auction for $959,500 to Guitar Center, the proceeds going to benefit Clapton’s own Crossroads Centre. At the time of the sale, it was the most expensive guitar ever sold. The record has been broken several times since.

Jimi Hendrix had several Stratocasters throughout his illustrious career. But his most famous was the 1968 Olympic White Strat that he called ‘Izabella’. It became known to the world, however, as the ‘Woodstock Stratocaster’.

It wasn’t even Hendrix’s favourite. His number-one Strat was the one he called ‘Black Beauty’. But the Woodstock Strat is the instrument most associated with him, likely due to media coverage and retrospective reverence of his Woodstock performance.

Hendrix continued to play the guitar for the remainder of his life. However, photos have since surfaced of Jimi playing an all-white Stratocaster with what appears to be a notch in the body. Given that the current Woodstock Strat doesn’t have that notch, it remains unknown whether or not Hendrix had another identical all-white Stratocaster with a notch or if it was the Woodstock Strat all along.

The guitar was originally right-handed and, unlike other Strats on this list, it remained completely stock aside from being set-up and restrung left-handed. Fender was making left-handed Stratocasters as early as 1962, so it’s possible that Jimi had simply grown accustomed to the set-up of a right-handed Strat strung backwards.

After Hendrix’s passing in 1970, the guitar fell into the possession of Mitch Mitchell, drummer of the Jimi Hendrix Experience, who held onto it until 1990, when he sold it to Italian TV host Gabriele Ansaloni. Ansaloni later auctioned it off to Microsoft co-founder Paul Allen. It raked in $2,000,000.

Although EVH’s Frankenstrat wasn’t technically a Fender product, it was made with Fender replica parts by a company called Boogie Bodies. The parts were purchased cheaply from Wayne Charvel’s shop because the body had a knot in it. EVH dropped a Gibson PAF from an ES-335 into the bridge position.

The Frankenstrat was brought to life in 1978 and inspired a slew of hot-hodded Super-Strats to follow. In fact, Fender didn’t start making Stratocasters with humbuckers until around the mid-’80s, though it’s debated when they first started offering them.

Van Halen’s popularity undoubtedly factored into Fender’s decision – after 1978, everyone started using locking vibrato systems and humbuckers in the bridge. The Frankenstrat featured a couple of different versions of the Floyd Rose, which was at the time still in its development stages. The Frankenstrat remains one of the most esteemed instruments of all time.

Iron Maiden guitarist Dave Murray led the new wave of British heavy metal into the US wielding a familiar weapon.

He had been a Strat user from the start. In 1976, he bought a Stratocaster, which had previously belonged to Paul Kossof of Free, with ’63 body and a ’57 neck. Murray swapped out the stock single-coils for a DiMarzio Super Distortion in the bridge and a DiMarzio PAF in the neck. The pickup combination allowed him to play and record rhythm parts, solos and the occasional clean interlude on every Iron Maiden record until about 1990, when he retired the guitar in favour of a signature model, which was of course based on his main axe.

Murray experimented with different vibrato systems through the years, from a stock floating tremolo to locking tremolos like the Kahler, which required the addition of a locking nut to the neck. This was later swapped out for the original bridge. The guitar is still in Murray’s possession today.

Fender has done two runs of signature Strats for Dave Murray. The first, from 2009 to 2014, was a close replica of his black ’57 with a standard bridge and the DiMarzios. That model features a three-way pickup selector, with each position used for one pickup so they’re not used in combination. In 2015, Fender began making a California Series version, equipped with Seymour Duncan pickups, a Floyd Rose, and a compound radius neck.

Murray’s Strat certainly isn’t considered iconic the way Hendrix’s and Gilmour’s are. But the use of Stratocasters in sculpting Iron Maiden’s sound, one of the most important metal bands on the planet, should not be disregarded.

Murray’s adoption of the Strat was a massive step towards the model being incorporated into the world of metal. Later on, Jim Root would get his own stripped-down signature Stratocaster with active humbuckers, expanding the sonic offerings of the instrument even further into the realm of modern metal.