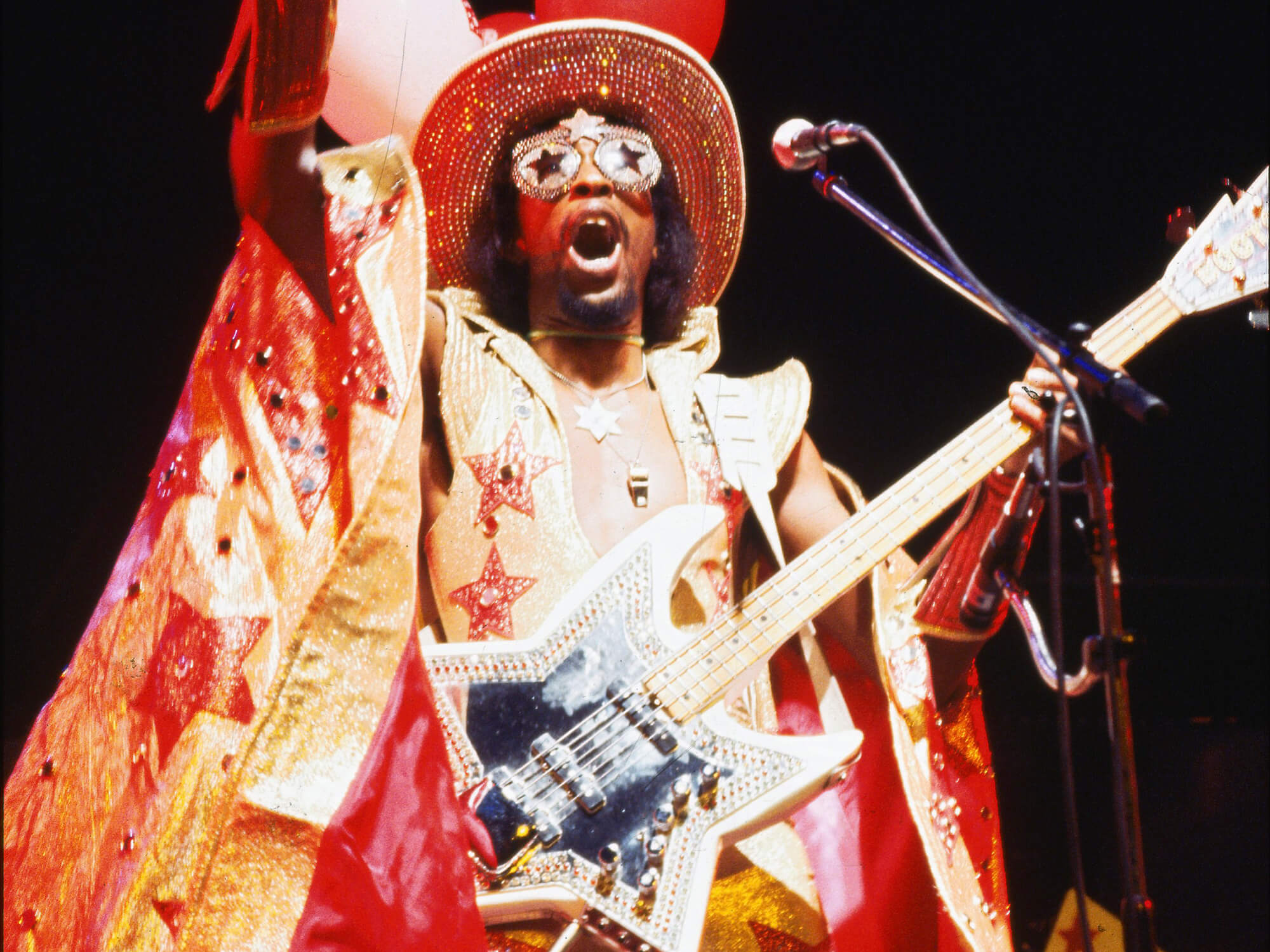 The story of an instrument so unique that even someone stealing it couldn’t keep Bootsy and his most famous bass guitar apart.

Bootsy Collins is a one-of-a-kind musician, so it is completely reasonable that he would have a one-of-a-kind instrument created to accentuate his one-of-a-kind ensemble. We are, of course, talking about the Space Bass [sometimes referred to as The Star Bass], an instrument that would go on to become synonymous with Bootsy’s larger than life image.

Our story starts in 1975 in a modest music shop in Michigan where Bootsy tasked a young guitar tech named Larry Pless with creating the bizarre instrument. Pless had worked on Bootsy’s basses prior to that but had never met the man himself. Prior to the Space Bass, Bootsy was playing Fender Jazz and Precision Basses with James Brown and George Clinton’s various projects. This time, he came to the shop with an idea for a band new custom bass befitting his eccentric image.

Bootsy had roughly sketched a design on a napkin depicting a wild star shape design with a star-shaped headstock. Pless went to work creating prototypes of the bass at his own shop in Flint Michigan. Pless reworked certain aspects of the design to make it a little more practical – these included alterations to the headstock design that would come to be known as the “Starburst” rather than a star shape.

The points closest to the neck were curled into more of an SG style shape as well. Later versions of the instrument featured the pointy body and headstock shape that Bootsy originally sketched. Pless recounts that the price of the original Space Bass to have been somewhere around $900 [about $4400 today, adjusted for inflation].

Bootsy recalled meeting Pless in an interview with Premier Guitar in 2017, “The first Space Bass was made in 1975 by a guy named Larry Pless, at a place called Gus Zoppi Music in Sterling Heights, Michigan. I took a drawing in there and he was a young and up-and-coming guitar maker. Wouldn’t nobody make it. I was up on 48th Street in New York—all up and down there—and I was telling them about this star bass that I wanted, and nobody was interested. I had to find somebody that would do it because, first of all, I didn’t have no money [laughs], and second of all, nobody was interested because it wasn’t hot on the market. Nobody had a star bass. Nobody was talking about a star bass…. and Gus Zoppi Music store was an accordion store—it wasn’t even a guitar store where I found this guy. I just happened to go in there, I started talking to the owner, I asked him if he had any suggestions, and he said, ‘Yes. I’ve got a young guy that’s working for me in the back that might be interested because he’s always been wanting to make guitars.’ So that’s how I found this guy.”

The original bass had a maple neck-through design with a unique variant of mahogany on the “wings” of the body from the Philippines. The neck shape was modeled after Bootsy’s favorite Precision Bass. The bass originally only had one pickup. It featured dual outputs and as Bootsy added more pickups, an output was added for each pickup [it currently has four] which would all go to separate pedal boards and amps.

The Space Bass was delivered to Bootsy just in time to be featured on the cover of the Stretchin’ Out in Bootsy’s Rubber Band album in 1976. That album featured Bootsy on vocals as well as bass and was produced by Funkadelic godfather, George Clinton.

After the bass was delivered to Bootsy, he began playing it regularly, until somebody stole it in Chicago. Fortunately, it was such a recognizable instrument that it was eventually returned to him. However, while the bass was missing, Bootsy had Pless build him another one. The second bass had a basswood body and a maple neck – Bootsy preferred the tone of the first bass to the second.

Larry Pless was not your typical luthier – he worked the majority of his career for General Motors. The shop he worked in was not a typical “luthier shop” it was an artistic space for woodworkers to come and create. The Shop, as it was known locally, saw its share of unique instruments take shape within its walls. One guitar, built by a school friend of Pless’, was shaped like a hand. Pless was only 20 years old when he was tasked with building the iconic bass but he already had experience building guitars – the first guitar he built was a nylon string acoustic for his sister. He estimates that he has made somewhere around 140 guitars in his career as a luthier.

Bootsy Collins was known for his outlandish outfits – his Space Bass quickly became an integral part of his persona. While Bootsy was a big guy – tall and extravagantly dressed, the Space Bass complemented that very well as it too was outlandish and big. It required a special Anvil Case for transport. Pless said when the bass was transported in a taxi, it took up the entire backseat and he had to ride up front.

The basses would sometimes return to Pless for maintenance [or to have more rhinestones added to the body]. The mirrored pickguards were often a part that required attention.

Bootsy played hard and the bass would be soaked in sweat after performances – his sweat would eat into the mirror finish, so Pless ended up having to coat them in lacquer to protect them from Bootsy’s corrosive sweat. Later on, Pless built a double neck 6/12 string for Bootsy as well.

Over the years, many different versions of the Space Bass or Star Bass have been produced. In 1998 Bootsy commissioned New York luthier Manny Salvatore to build a one that had much more prominent star shaped body and headstock, more like the sketch that had initially been presented to Pless.

Washburn made some Space Basses and Warwick currently produces a signature version of the bass. Warwick also teamed up in 2009 to create the Bootsy Collins Signature Infinity Bass. Bootsy still has his original and uses it to this day.