Paul Bigsby might be best known for his iconic vibrato, but without his solidbody electric guitar designs, Fender and GIbson guitars might look very different today.

Many people associate the name “Bigsby” with the iconic vibrato system that has been seen on almost every popular guitar model over the years. The vibrato systems became so popular, it’s easy to forget that Paul Bigsby actually made his own guitars before he started making vibrato systems.

The Bigsby Electric Guitar company was founded in 1946, and although Bigsby specialized in steels (lap and pedal) he did make a handful of standard guitars that would come to shape the way all solidbody guitars would be made in the decades that followed.

Bigsby was known locally as a guy who could build anything. Everything was hand-built by Bigsby himself in his garage/shop – he even wound his own pickups. On the downside, he was not a great record keeper, which made documenting just how many guitars he built quite difficult.

Company historians have only been able to document 47 steels (lap steel and pedal steel), six standard guitars, one tenor guitar, two double-neck guitars, two mandolins, and six replacement necks out there in the world. His own-wound pickups were used by artists like Les Paul and Chet Atkins.

So to say the least, Bigsby guitars are quite rare – they were almost all custom-ordered and custom-built for musicians. The Bigsby Guitars were actually the first to feature all the tuning pegs on one side – something we now most heavily associate with Fender Guitars. His headstock also featured a ‘scroll’ shape that bears more than a passing resemblence to the the iconic Fender Stratocaster headstock. 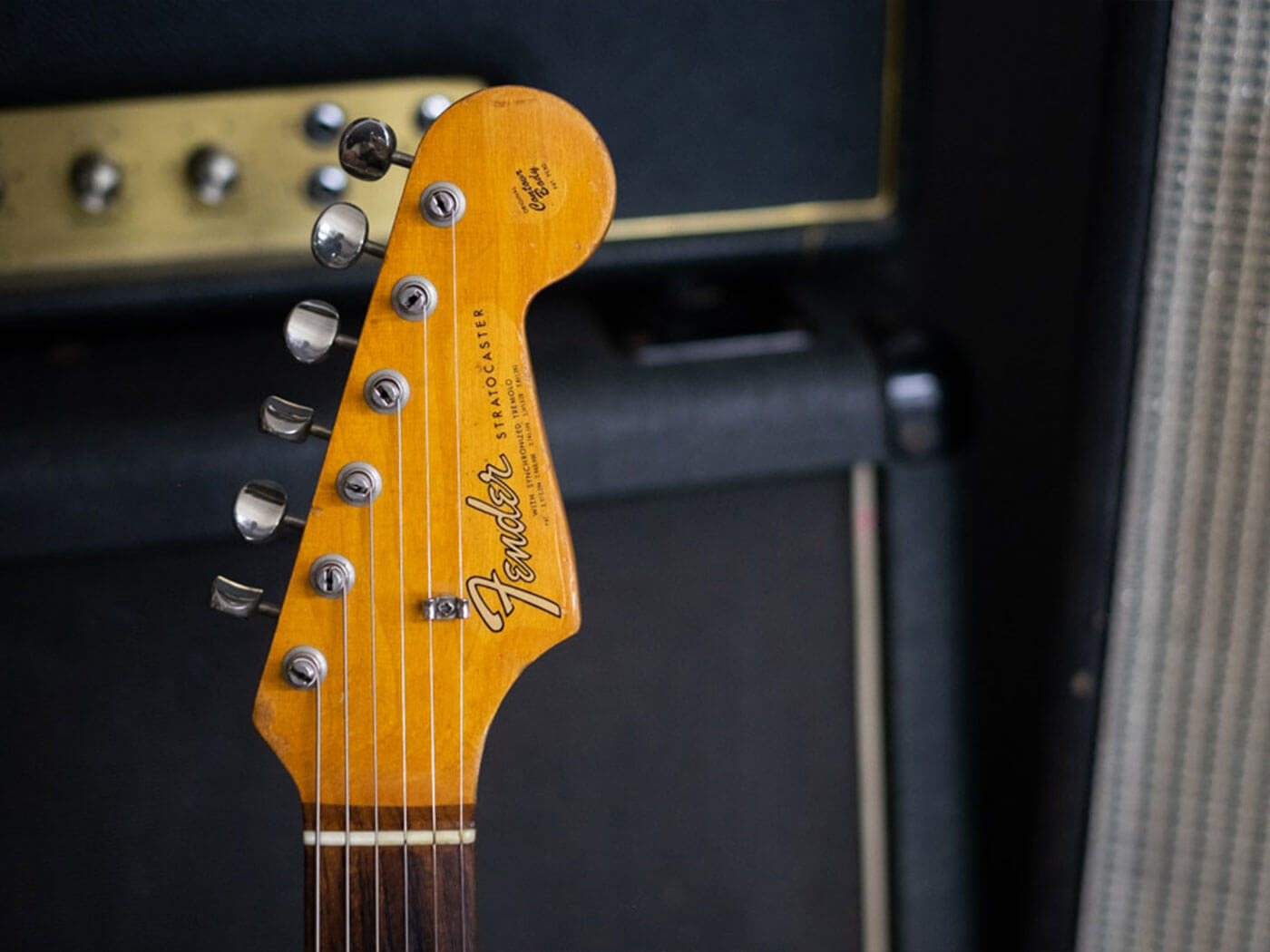 Paul Bigsby is often left out of the conversation when it comes to talking about solid body guitar innovators, but the truth is that it was he – not Leo Fender or Ted McCarty, who created the first modern solid body electric guitar.

And it’s not like it’s some lost secret – the guitar in question was created for country superstar Merle Travis and currently resides in the Country Music Hall of Fame in Nashville. Of course, Les Paul had created The Log in the early 40s, which could be considered the first solidbody electric guitar. But while the Log was revolutionary in so many ways, visually the sight of an Epiphone jazzbox sawn in half and attached to a 4×4 plank of pine was not exactly going to win any awards.

Bigsby’s guitar was crafted from scratch to be a solidbody instrument, and it was a design that revolutionised the guitar industry from that day forward – you can see the influence he had on many early mass produced solidbodies all over the design.

1948 Bigsby Merle Travis Guitar. Image: Nigel Osbourne / RedfernsSo how did this remarkable instrument come about? Well, the story goes, Merle Travis met Paul Bigsby at a local motorcycle racetrack [Bigsby raced motorcycles at the time] and asked him to make a solidbody guitar that would have the same sustain that a lap steel would have.

At the time, electric guitars were still just electrified acoustics. The Merle Travis Guitar was solid curly maple and did feature some weight relief [today we might call it “chambered”]. The guitar did not originally feature a cutaway. That was altered a few years after it was originally built. At the same time, the headstock was also altered into the shape we see today. The single cutaway shape was later coopted by the Gibson Les Paul model.

The book The Story of Paul Bigsby: Father of the Modern Electric Solidbody Guitar, references a letter written in 1950 by Don Randall who was in charge of Fender’s distribution at the time. The letter implies that Leo Fender copied Paul Bigsby’s design, as it states, “[Merle Travis] is playing the granddaddy of our Spanish guitar, built by Paul Bigsby— the one Leo copied.”

The Travis guitar became a key piece of music history. Prior to this, Bigsby created an octagon shaped guitar with an aluminum plate on top. This guitar featured a headstock similar to what we might find on a Gibson [3×3]. That guitar was a neck-thru design and also featured a string-thru design at the bridge.

He used to label his templates with the name of who they were made for – one of his templates reads “Les Paul”, leading many to believe he made a guitar for him as well. Bigsby also made guitars for country greats like Hank “Sugarfoot” Garland, Billy Byrd, and Grady Martin.

Most of Bigsby’s guitars were originally built with a standard fiddle style tailpiece. The Bigsby vibrato that we all know and love today made its first appearance in 1951 and went to, of course, Merle Travis. The molds and parts were all built by Bigsby in his garage out of aluminum. They became rapidly popular. Bigsby offered a B-16 model for his friend Leo Fender’s new design, the Telecaster, even though he was allegedly upset about Leo Fender’s use of his headstock design – a design that would ultimately become iconic of the brand.

Sometime in the mid-50s, Bigsby decided to focus all of his attention on his new vibrato system. Ted McCarty, the wily head honcho at Gibson, had worked out an exclusive deal to use the vibrato system as an option on Gibson guitars. This exclusive deal was, in part, struck because McCarty offered an improvement on the original design that allowed the arm to be pushed out of the way when not in use.

Not long after, Gretsch requested a similar deal – ultimately Bigsby did end up making the deal but would not agree to it unless Ted McCarty agreed. This sort of stand-up business ethic followed Paul Bigsby throughout his entire career. In 1965 he sold out his company to Ted McCarty, but died shortly after in 1968.

Under McCarty’s ownership, exclusive dealings with other companies continued. In fact, in 1968, McCarty made a deal with Fender to start making vibratos with the Fender “F” branded on them instead of the Bigsby logo. In 1999, the brand was sold to Gretsch, and in 2019, it was sold again to Fender.

While the Bigsby name is most closely associated with the groundbreaking vibrato tailpiece, it’s important to remember the incredible legacy laid forth by Paul Bigsby’s guitar designs. He was a common thread and an inspiration to those we commonly consider the godfathers of the modern electric guitar – Leo Fender and Ted McCarty. The music industry owes Paul Bigsby a great debt of gratitude and reverence.